Striking it Rich in New Zealand – Panning for Gold in Ross

Just as Alaska and the American West experienced gold rushes in the mid-1800s, so, too, did New Zealand, literally on the other side of the world.

In fact, if it hadn't been for the desire to strike it rich in the 1860s, many of New Zealand's towns may not exist today. Queenstown, for example, was first settled in 1860, but didn't see a boom in population until gold was discovered in the nearby Arrow River in 1862. 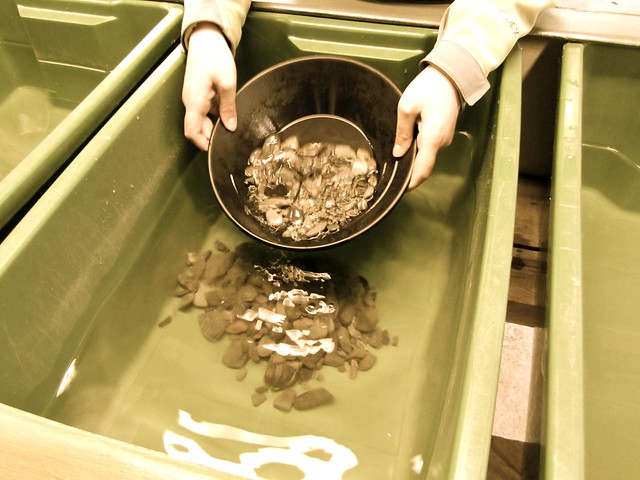 Yes, in the early days of New Zealand, gold was vital to kick-starting the young colony's economy. From the first discovery of gold by Charles Ring in Coromandel town in 1852, gold rush followed gold rush as the shiny stuff was discovered in all corners of New Zealand. After Coromandel came Otago's first gold rush in 1861, and then the gold rushes of the West Coast beginning in 1865.

Panning for gold in Ross

It was here on the West Coast, in the tiny town of Ross, that I got a taste of New Zealand's gold mining past. Even though Ross today is a town of only 300, it was an important center of the West Coast gold rush in the 1860s. And a quick visit to Ross' visitor center offers anyone the chance to get transported back in time, when everyone in the country was hoping to strike it rich. 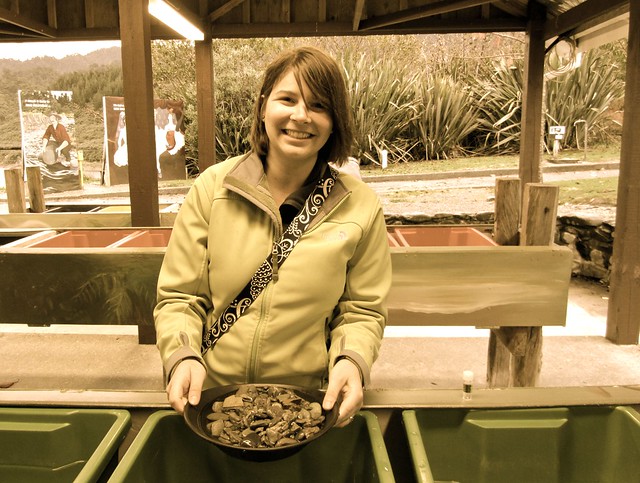 There's no digging or panning in mountain streams for tourists here in Ross in the winter (though you can go fossicking for real in Ross when the weather's nice, as well as in other parts of the country, as New Zealand still has an active gold mining industry today). Instead, after paying $9 NZD, you're given a pan full of rocks, led out back to a line of green wash basins, and instructed in the art of gold panning.

It sounds kitschy, and it is. But it's also quite fascinating to realize how difficult striking it rich must have been back before modern technology existed. 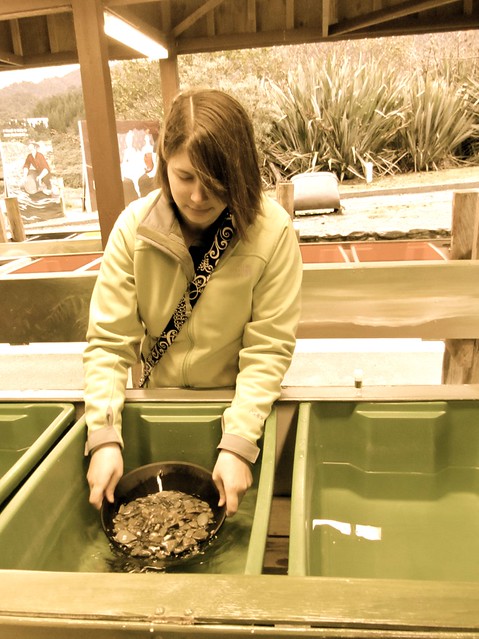 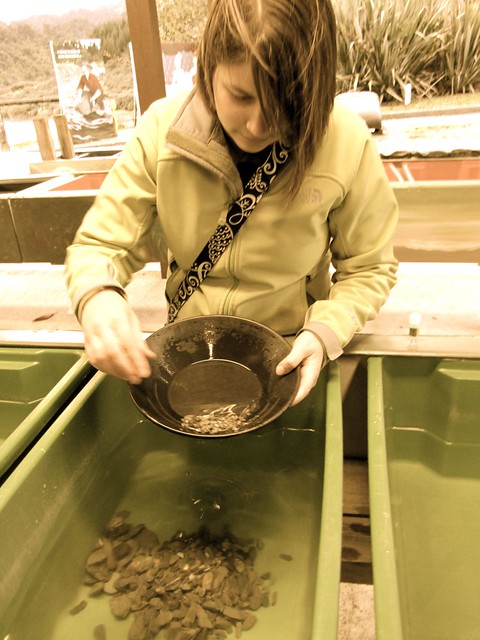 The idea of gold panning in Ross is to shake your pan until all the rocks are knocked out, and tiny flecks of gold (yes, real gold!) remain in the bottom. However, no matter how I swished and swirled, I could not get the hang of it. Luckily for me, though, gold is denser than water, so it all sank to the bottom of the pan anyway.

As I read plaques in Ross about how hard it was to traverse the rugged West Coast in search of the next big mining spot, I was reminded of riding along the White Pass railway in Alaska a few summers ago — a train that follows the old Klondike trail that eager gold prospectors walked (yes, walked, with gear and everything) through the mountains during the early Alaskan gold rush.

It's amazing to think about the lengths men went through in the hopes of carving out a better future for themselves and their families. It's commendable, but I certainly don't envy any of them how difficult it must have been.

That, and I know I definitely would have come up empty-handed, because I'm a terrible gold panner.

Have you ever tried your hand at gold panning anywhere in the world?