“What’s even on the Kapiti Coast? Don’t go there. You’ll be so bored.”

It was a common warning I heard as I traveled through New Zealand’s South Island in May. When I told people that I planned to head back north as a guest of Nature Coast Tourism after spending only a few days in Queenstown, most would wrinkle their noses and ask me why.

“There’s nothing there,” they said. “Stay in Queenstown for a few more days instead.”

And I almost did stay in the southern resort city for a few extra days. If I’d been able to find a cheap flight back to Wellington on my departure day, I may have skipped the Kapiti Coast entirely.

But I couldn’t find a cheap flight. And I’m so glad I couldn’t.

Because, despite all the naysayers down South, the Kapiti Coast — and especially Kapiti Island — turned out to be one of the highlights of my trip.

The Kapiti Coast is located about an hour north of Wellington, situated around the small towns of Paraparaumu and Waikanae. I’d only passed through the area once before, and didn’t know much about it at all.

I didn’t know that it was also known as “the Golden Coast,” or that it’s currently one of New Zealand’s fastest-growing areas. I also had no idea that it was so beautiful. 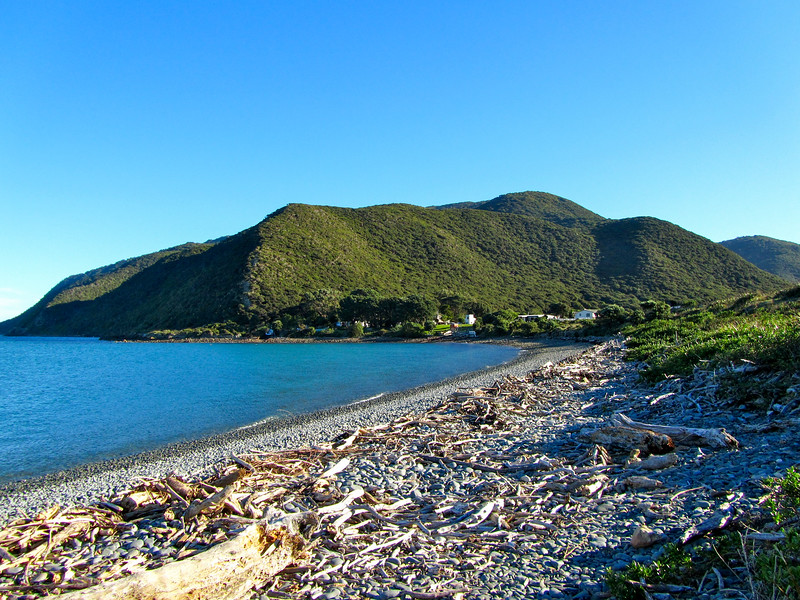 I arrived in Paraparaumu (or Paraparam, as it’s nicknamed) around 9 a.m. on a sunny Thursday morning. I’d hopped a train from Wellington, and the journey was surprisingly short (only 1 hour) and scenic, with the train snaking along the New Zealand coast as it headed north. As soon as I stepped off the train, I was immediately whisked away by Janie of Nature Coast Tourism to catch a ferry boat that would take me over to Kapiti Island for the morning and afternoon.

Kapiti Island isn’t just any old island, though. Located about 5 miles off the coast across the Rauoterangi Channel, Kapiti Island is home to a Nature Reserve, and boasts an impressive array of native and endangered birds. Even as someone who has never been very keen on birdwatching, I understood quickly that this island was going to be something special.

Visiting Kapiti Island is not necessarily easy. You have to get a permit from the Department of Conservation, and only 50 people are allowed to visit the island each day — 18 at the privately-owned north end, and 32 at the DOC-controlled middle section, which includes the highest point of the island, Tuteremoana, at 1,709 feet. 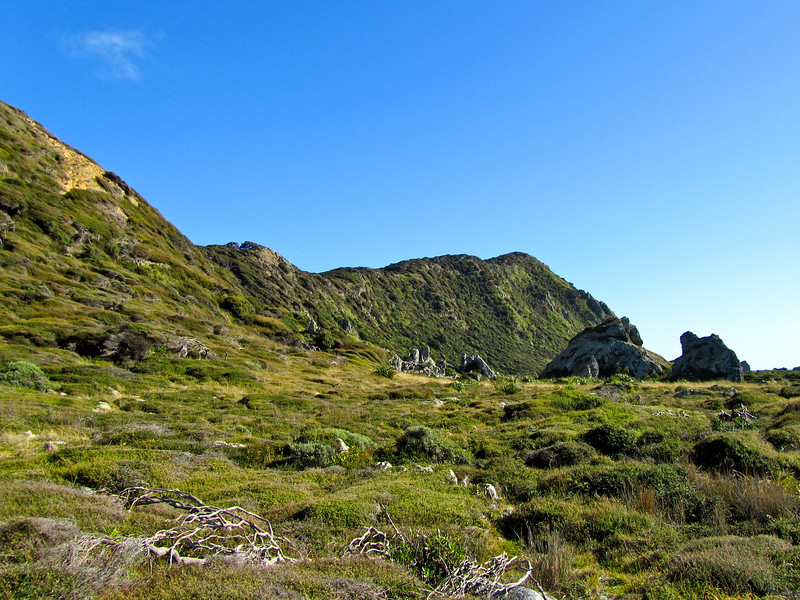 I was to visit the north end of the island, which is owned by a few Maori whanau, or families, who can trace their lineage on the island back for centuries — mostly to the chief Te Rauparaha, who first settled Kapiti Island in the 18th century.

I clambered aboard a private ferry that morning with another family and their guide, and a group of school kids on a field trip. The school kids squealed and laughed the whole way across the rough channel, screaming every time we came down off a large swell. They were dropped off at the DOC-controlled part of the island for an afternoon of hiking, while the rest of us continued on to the north end. 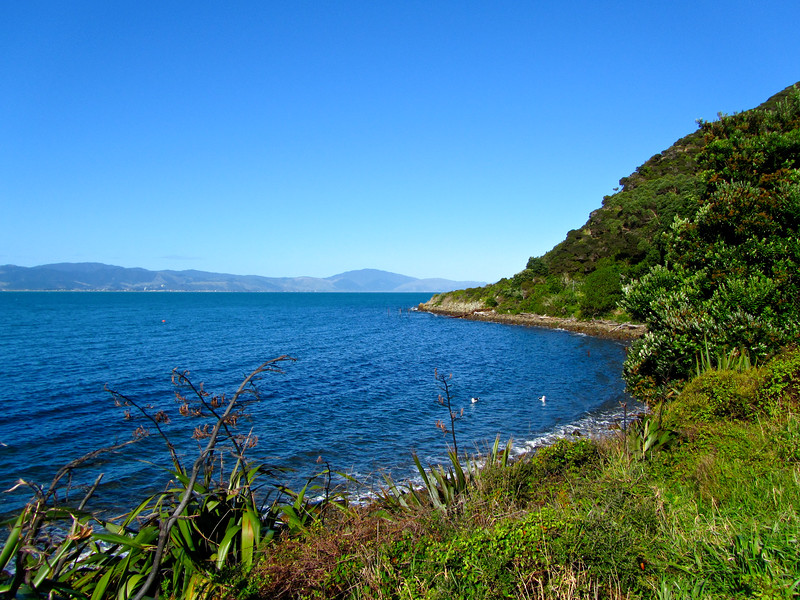 We arrived on the north end and helped unload food and other provisions from the ferry that would turn into our lunch later that afternoon, prepared at the lovely lodge that the local whanau owns. We headed there first for some tea and coffee, and began learning about the island.

The small handful of people who live on and care for Kapiti Island are very proud of its history, and work hard to preserve it. 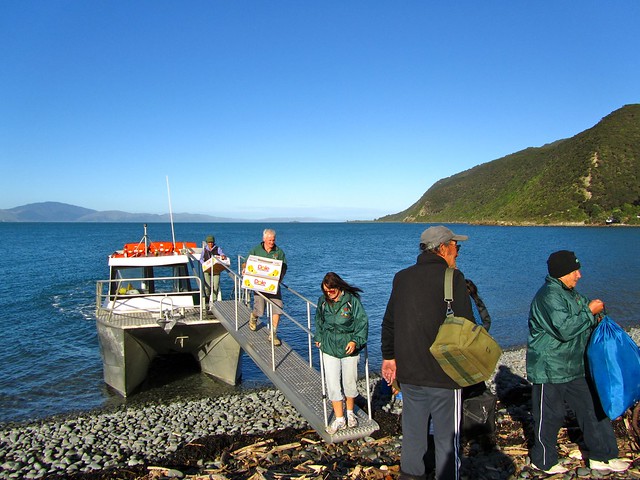 Kapiti Island was reserved as a bird sanctuary in 1897, but it wasn’t until 1987 that the Department of Conservation took it over. In the 1980s and ‘90s, efforts were made to return the island to a natural state — which meant getting rid of all mammals, since none except bats are native to New Zealand. Sheep and possums were the first to be removed. And, then, even though no one thought it would be possible, rats were eradicated from the island in 1998.

With the removal of all predators, native and endangered bird species have been able to thrive on Kapiti Island. In fact, here, the Little Spotted Kiwi roams in such large numbers that it’s technically “overpopulated” on the island.

After an introduction to the island, our guide, Jackie, described some of the native flora and fauna that we could expect to see on Kapiti that day — birds with funny-sounding names like the weka, takahe, pukeko, kereru, hihi, ruru, tui, and tieke. And it wasn’t long before we spotted some, either. Some rare (and when I say rare, I mean that there are only 250 left in existence) takahe birds were milling around the lodge as we sat sipping our tea.

Simply seeing these beautiful birds would have made the trip worthwhile, but there was plenty more to come.

We had the option of a few different guided hikes with Jackie, and decided to head along the base of the cliffs and out to a trail that skirts along the shoreline and past a lagoon. We also could have climbed up into the scrub brush and hiked to the sea cliffs on the western side of the island, but we opted for the easier walk so we could take things slow.

The weather could not have been more perfect — sunny and blue-skied and warm for late autumn. A bad gale had just blown through the area, leaving lots of driftwood on the beach, but only a light breeze blew as we walked.

Jackie was extremely knowledgeable about the island and its history, and one of the women in our group was very talented at spotting some of the birds our guide had told us to look out for.

We returned to the lodge for lunch, relaxing on the porch in the sunshine and keeping an eye out for birds.

Because Kapiti Island has no predators and sees few tourists, many of the birds are trusting and curious. Some — like the kaka — are also quite mischievous, and we were warned not to take any food outside unless we wanted one of these large parrots to land on our heads to beg for food.

After a delicious yet simple meal, we sat around for about an hour just watching the birds — including more takahes.

These colorful, flightless birds — about the size of small dogs or very large cats — are indigenous to New Zealand, and fascinating to watch. The handful that live on the north end of Kapiti Island are almost like pets, and have even been named by the local family. I felt very privileged to have visited Kapiti Island and interacted with some of these rare birds. Not many people have.

We eventually headed back to the shore in the late afternoon to wait for the ferry. I chatted with Jackie about the island and its conservation efforts, and felt really good about my decision to visit. Even though there’s always a risk when you have tourists visiting a protected area, Jackie said the island works hard to offset that risk.

For example, before we boarded the ferry in the morning and as soon as we arrived at the lodge, we were all screened for any unwanted invasive plant or animal species that may be hiding in our bags or in the folds of our clothes — just in case.

And, with only 50 people allowed to visit Kapiti Island each day, Jackie said the negative environmental impact is basically zero. Talk about the ultimate ecotourism venture.

But that’s the beautiful thing about New Zealand — it’s so incredibly eco-conscious. And people like Jackie and the locals who preserve Kapiti Island help make it that way.

Next time, I vowed, I'd come to stay overnight to spot kiwis! (Check out that tour here.)

When I got back to Paraparaumu that evening, I took a walk down to the beach to take one more look out over the Rauoterangi Channel toward Kapiti Island. There, I saw one of the prettiest sunsets I've ever seen in New Zealand.

As I stood there watching the sky turn shades of pink and orange, I was so glad that I hadn't been able to stay in Queenstown any longer.  Because, if I had, I would have missed out on a truly unique New Zealand experience. And that would have been a shame.

Have you ever visited a place that exceeded your expectations like this? What's your take on ecotourism?

Note: My visit to Kapiti Island was sponsored by Nature Coast Tourism and Kapiti Island Nature Tours. Other tour options to the island include seafood gathering tours, weaving lessons, “Dawn Chorus” tours, and kiwi-spotting tours, which include overnight accommodation at the nature lodge.

33 Comments on “Conservation on Kapiti Island”