I was oddly calm as a man I'd never met before helped me tighten a harness around my butt and crotch.

Wait, wait wait… did your mind just go to a dirty place? Shame on you!

I was getting harnessed up in order to bungee jump off a ledge overlooking the town of Queenstown, New Zealand.

(Perhaps still just as disturbing for some as the dirty image.)

This wasn't my first bungee jump, though — in fact, it was my FOURTH in New Zealand and my third in Queenstown. Despite always saying that I'm NOT going bungee jumping “this time” when I go to New Zealand, I've managed to throw myself off something high and scary at least once on each of my trips to New Zealand.

And I've now done all three of AJ Hackett's bungee jumps in Queenstown.

There's the Kawarau Bridge jump (“the original”), The Nevis (“the highwire bungee”), and The Ledge (“the bungee with a view”).

You can of course do all three in Queenstown (a “Thrillogy” combo will set you back $450 NZD), but if one bungee jump is more than enough for you, here's a look at each jump individually to help you decide which one you should book:

The historic Kawarau Bridge — located in a canyon just outside Queenstown — was the site of the world's FIRST commercial bungee jump. People have been flinging themselves off this 43-meter (141-foot) bridge since 1988. The site is perfect for your first jump and has a great place for friends and family to watch from.

The Nevis should really be named the “scary as sh*t” bungee — because it is. It's New Zealand's highest bungee jump at 134 meters (nearly 440 feet), and to get out to the jump pod (which is suspended on a wire over a gigantic canyon) you have to take this teeny tiny cable car. It's terrifying. But, with 8.5 seconds of free-fall, it's also one of the most epic things you can do in Queenstown. 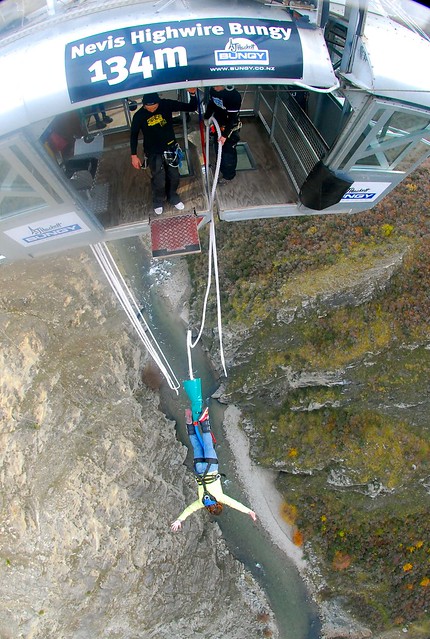 The Ledge is the only bungee jump located IN the city of Queenstown. To get to the jump site, you have to take the Skyline Gondola up the side of a mountain, giving The Ledge an incredible view out over the city, Lake Wakatipu, and the Remarkables mountain range. This bungee is also unique in that you are harnessed at your waist instead of around your ankles, meaning there are several different ways you can jump. 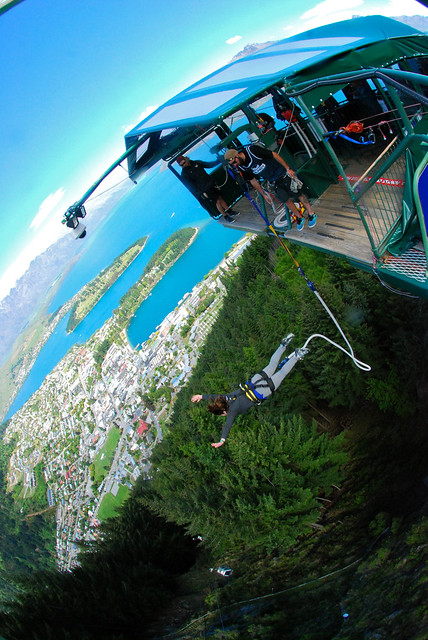 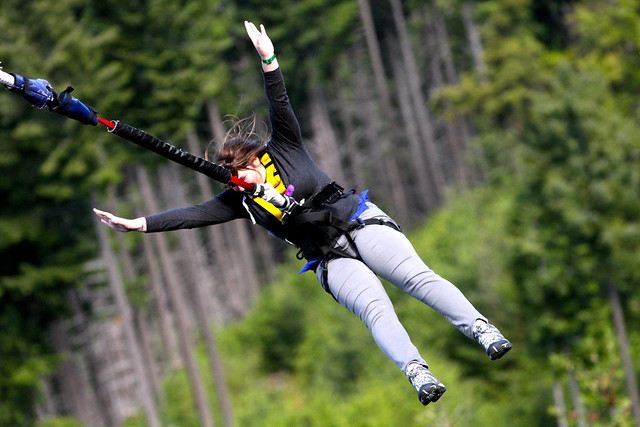 So which bungee jump in Queenstown is the BEST?

Well it's impossible to say. The Kawarau Bridge was my first bungee jump ever back in 2005, and so I have really fond memories of it. The Nevis was one of the scariest things I've ever done — but also super rewarding and fun after I did it. And The Ledge is just pure fun, and was the third of the three jumps I completed in Queenstown.

In the end, it depends on the sort of bungee experience you want to have!

Tell me — which bungee would YOU choose? 25 Comments on “Completing the Bungee Jumping Trifecta in Queenstown”