Riding the Rails in NZ – The TranzAlpine

Home » New Zealand » Riding the Rails in NZ – The TranzAlpine

The wind in my hair. Sunshine on my face. Stunning scenery slipping by…

Okay, so it was actually more like wind strong enough to knock me over, soot in my hair, and chilly sun on my face… But the scenery was still stunning. 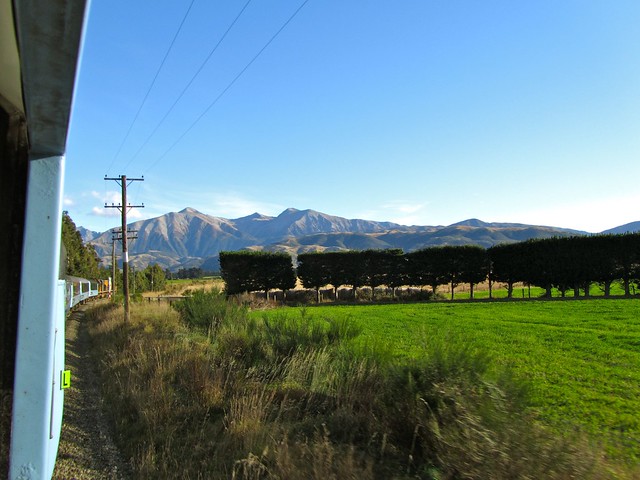 This was the scene in the outdoor viewing car on New Zealand's TranzAlpine train, a 4.5-hour rail journey that takes passengers from Christchurch to Greymouth via Arthur's Pass through the Southern Alps.

The TranzAlpine (part of NZ's Tranz Scenic rail service) is listed as being one of the most visually stunning train rides in the world. And, while it's been on my “next time” list for New Zealand for years now, I'll admit to being a bit skeptical about all the superlatives used to describe the journey.

But you know what? This may indeed be one of the most striking train rides in the world. 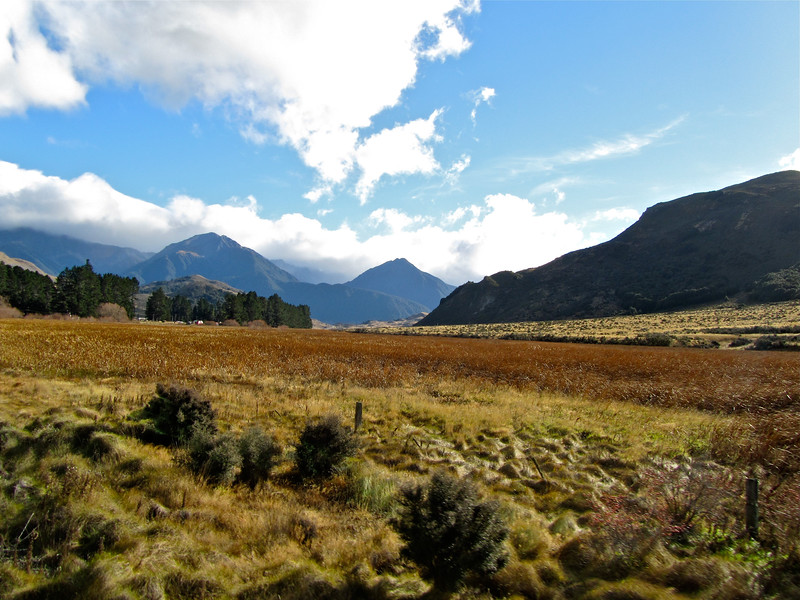 The journey starts in Christchurch, and heads out over the sprawling Canterbury Plains. The train stops in a few outlying farming towns, inching ever closer to the Southern Alps that can be seen looming protectively on the horizon. 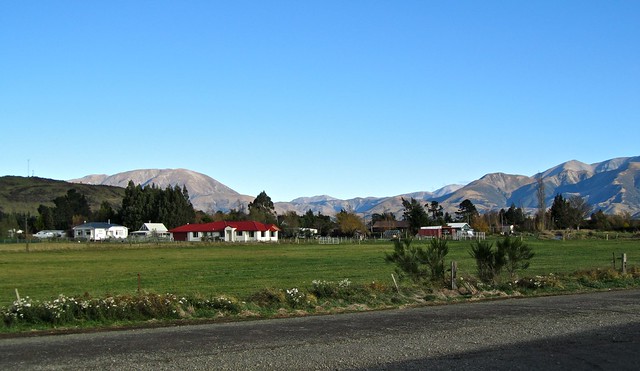 I unfortunately missed the first dusting of snow on the Alps by a few days, but the peaks nonetheless contrasted nicely with the rich green of the plains. 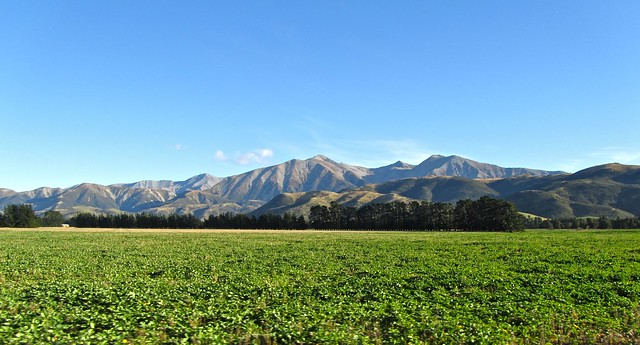 Eventually, we were hurtling along a track winding along a river gorge, passing over what seemed like rickety bridges with a blue-green Waimakariri River meandering along far below. 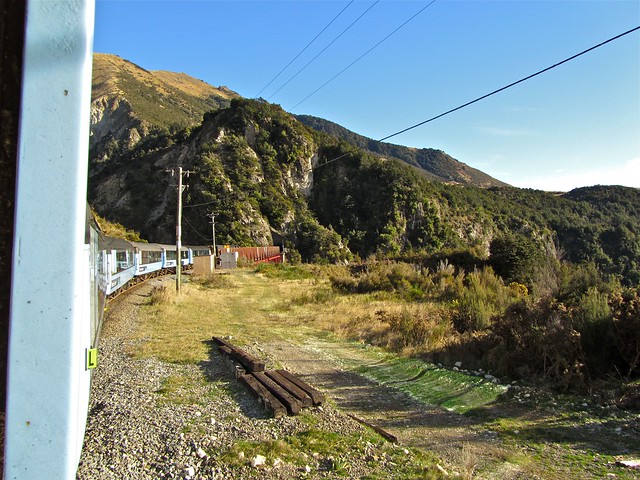 Views of the gorge and river were constantly cut off as we darted in and out of a series of tunnels, the smell of diesel engine exhaust hanging thick in the dark tunnel air. I would discover later just how dirty this soot made my hair… But, at the time, nothing could have kept me in my seat.

The scenery quickly changed from plains to mountains, and I spent most of the time in the open-air viewing car, snapping photos and trying not to lose my hat in strong gusts of wind.

I was glad that I was taking this journey at the end of autumn, because the colors were bright and rich — reds, oranges, yellows, greens… and always the deep brown of the mountains. 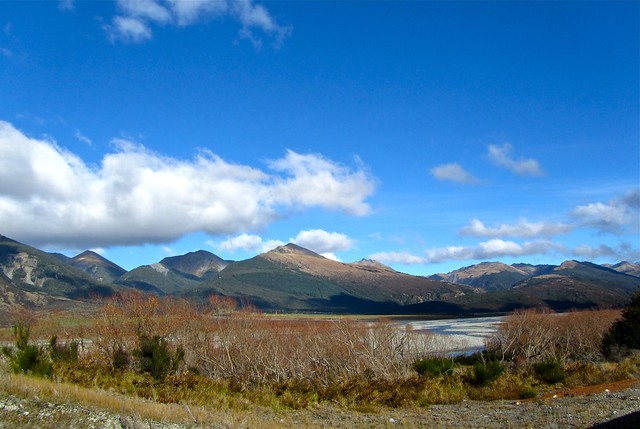 We passed through towns like Cass and Otira — tiny, almost-ghost-towns with populations you could sometimes count on one hand. I love the ruggedness of New Zealand and the fact that it still has so many untouched areas… but I still don't think I would ever be persuaded to live in one of these railroad towns. 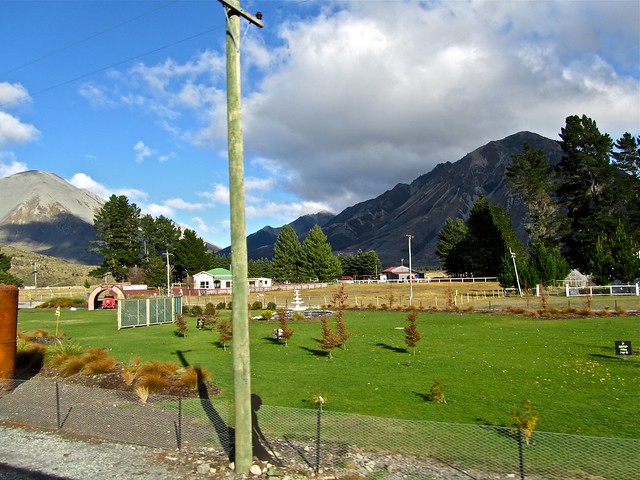 The train's route eventually took us through even more new scenery, including a few wide river valleys, which we crossed on a series of low-slung bridges.

Clouds began to form on the other side of the Southern Alps, signifying our nearing the West Coast, which only added to the drama of the landscape. If I could have slowed time down, I would have. It was that beautiful. 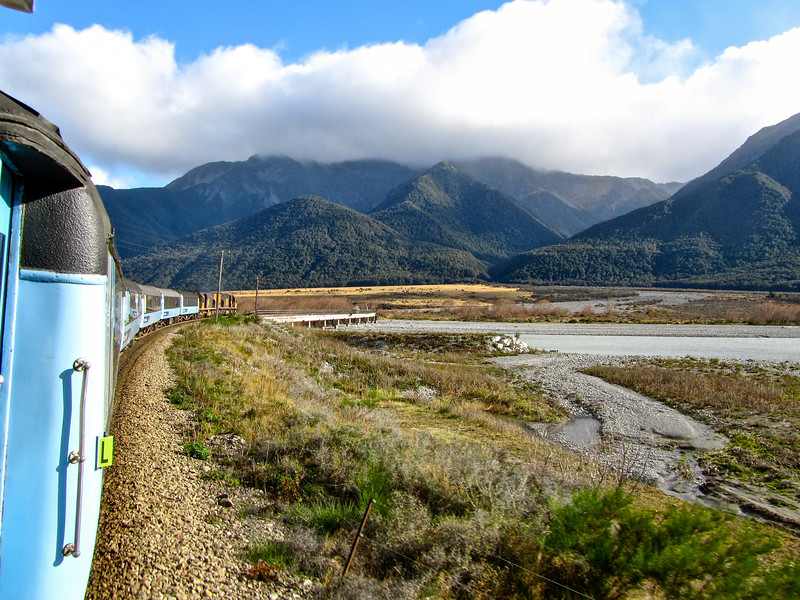 A little more than halfway through our journey, we stopped briefly at Arthur's Pass. At 2,425 feet above sea level, this would be the highest we would travel on the train. 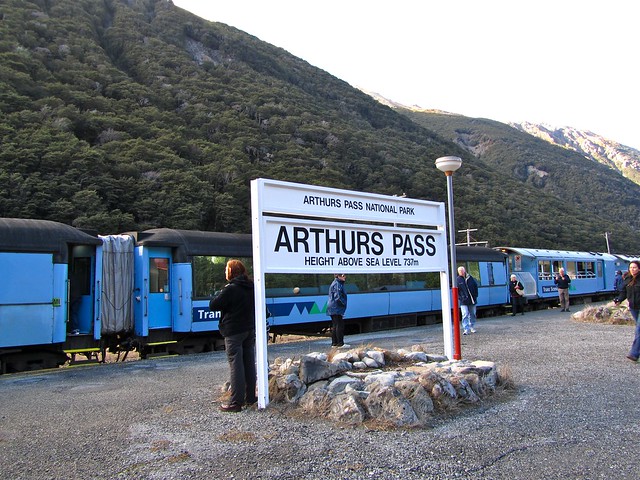 We then descended through the 5.3-mile-long Otira Tunnel, and emerged to cloudy skies and a light rain. We had reached New Zealand's West Coast, which is known for its often-soggy climate. I was perfectly happy to give up my spot in the open-air car and return to my comfy seat.

I grabbed some snacks at the onboard cafe bar, popped on my headphones, and simply enjoyed the rest of the ride. There was occasional commentary about the areas we were passing through as we continued on, but I never felt as though I was being bombarded with facts. I could have easily drifted off to sleep, had I been so inclined.

We arrived in Greymouth in the early afternoon, completing our coast-to-coast train journey. I was sad to see it end, but also really glad I now had one more fantastic New Zealand experience to tuck away in my memory.

If ever you're in New Zealand and in need of crossing the Alps, consider the TranzAlpine. I don't think you could possibly regret it.

Have you ever done the TranzAlpine journey? If so, what was your experience like? If not, what other scenic train rides have you taken?

Note: I received a free seat on the TranzAlpine as part of a complimentary Magic Bus ticket, which was one of my Blog4NZ prizes. As always, though, the opinions shared here all are mine. Money (and free stuff) can buy a lot of things, but my opinions aren't one of them.

36 Comments on “Riding the Rails in NZ – The TranzAlpine”