8 Reasons to Visit Canada This Year

Late in 2016, Lonely Planet released its “Best in Travel” lists for 2017. And at the top of its Top 10 Countries list – claiming the coveted #1 spot as the top country to visit in the new year – was Canada.

At first, some people were like “… Canada? Really?” But I understand Lonely Planet's pick.

Not only is Canada kind of, well, awesome, but 2017 also marks Canada's 150th birthday. And what better way to celebrate than with a trip to the Great White North?

If you still need some convincing, though, I've put together a list of all the great reasons why you should definitely visit Canada this year.

Reasons to plan a trip to Canada

For anyone who tries to use the argument that Canada is basically just the-US-but-colder (or USA Lite or America's Hat or any of those other silly things), let me point out that these are two very distinct countries with different histories, cultures, and traditions.

Yes, many of us speak the same language, and yes, our border is an incredibly peaceful one. But Canada is not the USA, and visiting or living in one country definitely doesn't mean you've experienced the other.

2. It has its own history

Even though Canada has only been a nation for 150 years, people have been living there for thousands of years. Just like different regions of the US have ties to different Native American tribes, so too are Canada's provinces connected to its First Nations people.

Most major museums in Canada explore this history, which is really fascinating considering the harsh conditions experienced in most parts of Canada for a majority of the year.

Add to this native history strong French and British influences, and Canada's cities and provinces all have their own distinct atmospheres. Canada also remains part of the British Commonwealth, with ties to the United Kingdom.

3. Canadians are SO nice

Like, seriously, the nicest. If you bump into one of them in a crowded space, THEY will probably apologize to YOU. It's just how they are.

To those fleeing persecution, terror & war, Canadians will welcome you, regardless of your faith. Diversity is our strength #WelcomeToCanada

Two years ago, I took a train trip across western Canada and ended up with one free day in Alberta, and one of my Canadian friends drove more than four hours (one way) just so she could take me to some of her favorite lakes in Banff. I can sometimes barely convince my American friends to drive an hour to come see me near Cleveland!

The stereotype of Canadians being incredibly kind is totally true.

There's a reason why I included Canada on my list of great places for solo female travelers: it's an incredibly safe country.

While the United States has some scary issues with gun violence among its citizens, our northern neighbor by contrast is much more peaceful. (Maybe it goes back to the ridiculously nice people?)

5. The nature is incredible

From the temperate rainforests on the west coast to the soaring Canadian Rockies to the vast prairies to the striking Atlantic coast in the east, Canada really does have some damn impressive scenery.

And the scenery *feels* bigger, too – probably because even though Canada covers 3.85 million square miles, it only has a population of just a little over 35 million.

It has some really impressive wildlife, like moose and polar bears, and is also a great place to glimpse the Northern Lights in the winter months.

Don't skip a visit to one of Canada's excellent national parks – there are nearly 50 of them to choose from.

On top of Canada's amazing nature, it also has really cool cities. From Vancouver to Calgary to Toronto to Montreal, Canadian cities are just as visit-worthy as its national parks.

And, while cities like Vancouver aren't necessarily the most affordable places to call home, Canada's major cities always make it onto top 10 lists of “most livable cities in the world” each year.

So, along with simply saying that Canada has cool cities, you can also say that the people who live in them enjoy a pretty high quality of life. (Maybe that's what makes them so nice!)

Speaking of Canada's cities, many of them host some pretty cool (and unique) festivals each year. Some of my favorites include:

In short, Canadians love any excuse to come together and celebrate.

This hasn't always been the case, so if you've been considering a trip to Canada, now is definitely the time to go!

Need even MORE inspiration? Here are some of my favorite posts about Canada that you should probably check out:

Who's planning a trip to Canada this year? 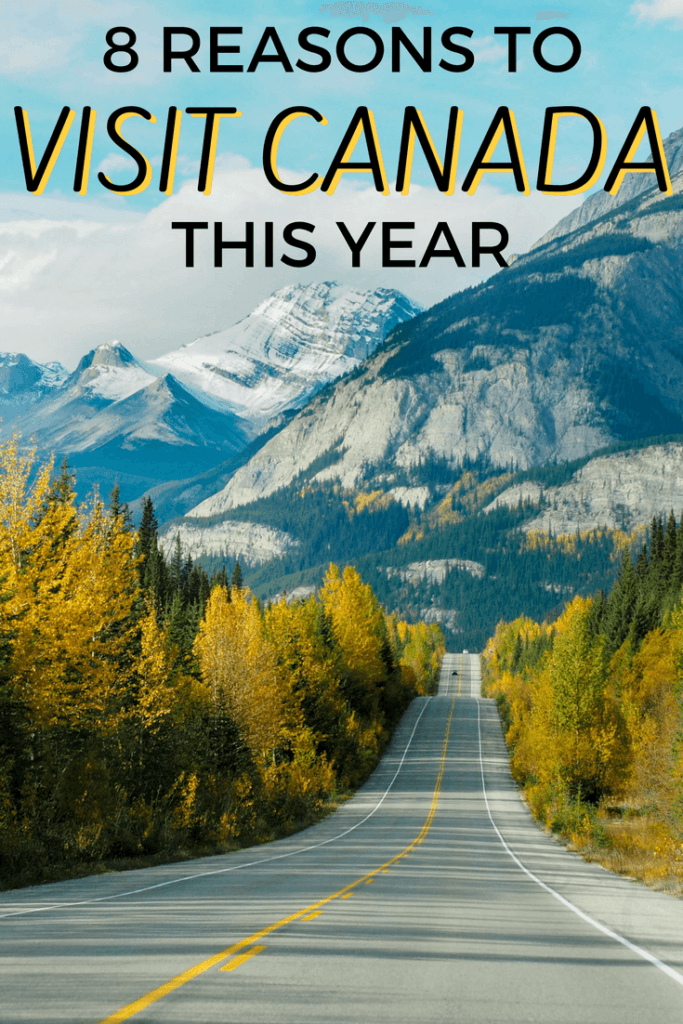 47 Comments on “8 Reasons to Visit Canada This Year”