2 Days in Edmonton: A Summer Weekend in Alberta’s Capital

Much like Calgary to the south, Edmonton is a city in Alberta that's often treated as just a “pass-through” city by most travelers – if they even make it here at all. But, just as there's more to Calgary than its proximity to the Rocky Mountains, there are reasons you should consider visiting Edmonton, too.

Edmonton is a city of just under 1 million people in central Alberta. It's the capital of the province, and its history goes back quite a long way; Fort Edmonton was established as a major trading post for the Hudson's Bay Company back in 1795, though people were living in the area long before.

Today, Edmonton is a growing metropolitan center. It's known as “Canada's Festival City,” is home to one of the largest shopping malls in the world, and boasts the largest expanse of urban parkland in Canada along the North Saskatchewan River valley.

Intrigued yet? Well, you should be!

Here are a handful of the cool things you can do with a couple days in Edmonton.

Note: This post is brought to you in partnership with Explore Edmonton, who hosted me during my trip. As always, though, all opinions are my own!

Things to do in Edmonton in 2 days

Edmonton is a fairly sprawling city with several neighborhoods worth exploring, but you can hit up most of the must-see sights in a weekend.

The High Level Bridge is one of the most iconic bridges in Edmonton. Not necessarily because of how it looks, but because of its history. The bridge sits more than 150 feet above the river, and opened in 1913 as the only bridge in Canada designed to carry four different types of traffic: rail, streetcar, automobile and pedestrian.

Today, the historic High Level Bridge Streetcar still uses the bridge to carry people across the river. The ride from Old Strathcona to Jasper Plaza takes less than 20 minutes, but you'll get the very best views from the bridge as you cross over the river.

Plus, most streetcar rides have someone on board to tell you a bit about the history of the streetcar and the areas you're traveling through on your ride. Stop by to see the Strathcona streetcar barn, too, which houses part of the city's fleet, some of which have come from different corners of the world and been restored.

Streetcars run roughly every 40 minutes (check schedules here), and it costs $7 for a round-trip ticket.

The largest museum in Western Canada, the Royal Alberta Museum is definitely worth an hour or two of your time in Edmonton. The museum largely focuses on Alberta, with galleries covering both the province's natural and cultural history.

3. See art at the Art Gallery of Alberta

The Art Gallery of Alberta began nearly 100 years ago in 1924. The collection – which now comprises more than 6,000 objects – has had different homes over the years, but its current one is in a modern beauty designed by architect Randall Stout.

The Art Gallery of Alberta is only about a block away from the Royal Alberta Museum, so you can easily visit both of them in one morning or afternoon.

Old Strathcona was once a city of its own separate from Edmonton, but the two merged in 1912. Today, the Strathcona neighborhood is known for its arts and entertainment facilities, along with good shopping and plenty of bars and restaurants. This was my favorite neighborhood in Edmonton!

If you take the High Level Bridge Streetcar from downtown, you can spend a few hours exploring Strathcona.

Some things to do here include:

5. Get some treats at Duchess Bake Shop

When I said I was going to Edmonton for the first time and asked people for tips on what to see and do there, several of them told me I had to go to Duchess Bake Shop.

This bake shop on 124th St. is absolutely worth a visit. They serve up amazing macarons, tarts, cakes, coffee, and more.

And, while you're in the area, the 124th St. neighborhood is home to some cute shops, too, so you may as well go for a stroll and explore (and, you know, walk off all the Duchess pastries you're bound to eat).

Edmonton is known as Canada's Festival City, and hosts a bunch of really cool festivals throughout the year (though, a large proportion of them take place in the summer!).

Some of the major festivals to check out in Edmonton include:

I was in Edmonton during the International Street Performers Festival, which was a fun couple of days filled with so many buskers and fun street acts.

Next time, I'd love to visit during Edmonton's Fringe Festival, which is the second-largest fringe theater festival in the world after the one in Edinburgh.

Edmonton is home to the North Saskatchewan River Valley, North America’s largest stretch of urban parkland. It's 22 times the size of Central Park in New York City, so you can imagine how much you can get up to here.

During the summer, you can go on a bike ride or hike along the river (Edmonton has almost 100 miles of multi-use trails), get your history on at Fort Edmonton Park, or even take a segway tour.

A unique thing to do on the river is to go for a sunset paddle in a replica Voyager Canoe (the types of boats the early explorers used) with Haskin Canoe. My canoe trip in Edmonton was sadly canceled, but this is absolutely something I hope to do next time!

8. Eat all the good food

Get ready, foodies! There's a ton to eat and drink in Edmonton. Some of my favorite spots included:

Drive 40 minutes from Edmonton, and you can spend some time in Elk Island National Park. This is one of the smallest national parks in Canada, but it packs a big punch when it comes to wildlife.

While there *are* elk in Elk Island National Park, the park is most well-known for its bison herds. More than 600 wood and plains bison call the park home, and conservation is a big part of Elk Island's mission. I was lucky to see a huge group of them right near the road.

Important note: Do NOT get out of your car to approach bison. And if you're hiking and come upon some, give them a wide berth. These are wild animals, and they CAN hurt you.

Along with driving the Bison Loop Road to look for the big animals, you can also rent a canoe to take out on Astotin Lake, go on a geocaching adventure, walk the Living Waters Boardwalk to look for birds and other aquatic life, or head to the park at night for excellent stargazing.

And, of course, keep your eyes peeled for pairs of the famous Parks Canada red chairs!

BONUS: Go to dinner at the Old Red Barn

One of my favorite evenings in Edmonton was the one where we took a drive out to Leduc for a Long Table Dinner at the Old Red Barn. These dinners take place several times throughout the summer in partnership with local chefs, and showcase local flavors and produce.

The Old Red Barn is located on a working dairy farm, and you eat family-style at a long table either on an outdoor verandah, or inside the loft of the red gambrel barn. Our dinner was put on by Kitchen By Brad, and we ate on the outdoor verandah with views of the farm and curious horses.

This was such a unique (and delicious!) evening, and you can really tell that the organizers are passionate about presenting a true farm-to-table experience. I can't recommend this enough!

On the drive back to Edmonton, we stopped by a blooming canola field for photos (the yellow fields you see throughout Alberta during the summer months are likely canola!). Chalk this up to one of my favorite nights of the trip!

Where to stay in Edmonton

For my visit to Edmonton, I stayed at the historic Fairmont Hotel Macdonald, one of the many Fairmont hotels that was built during the heyday of the Canadian railroad. Today, the Fairmonts across Canada are some of the nicest hotels in each city.

The Fairmont Macdonald is no exception, with a beautiful location overlooking the North Saskatchewan River. The hotel has a cozy lounge, on-site restaurant, and beautiful outdoor patio space. They also have a resident hotel dog named Smudge!

If you're planning a summer weekend getaway in Edmonton, here's how I'd recommend spending it:

Morning: Take the High Level Bridge Streetcar over to Old Strathcona and have brunch at Pip.

Late afternoon: Take the High Level Bridge Streetcar back downtown, and hit up a museum like the Royal Alberta Museum or Art Gallery of Alberta.

Evening: Have dinner at Baijiu or Uccellino. Go for an evening stroll along the river, or maybe even go out for a sunset paddle.

Morning: Have breakfast at your hotel or grab something to-go and head out to Elk Island National Park for the morning.

Afternoon: Head back to Edmonton and explore the 124th Street neighborhood; make sure to stop in to Duchess Bake Shop for a sweet snack.

Evening: Go to a Long Table Dinner at the Old Red Barn if you can. If not, grab drinks at Clementine, try dinner at Uccellino if you didn't go last night, and then take a stroll along 104th Street (AKA the 4th Street Promenade).

Did you know you could do all of this in Edmonton? Who's ready to plan a trip? 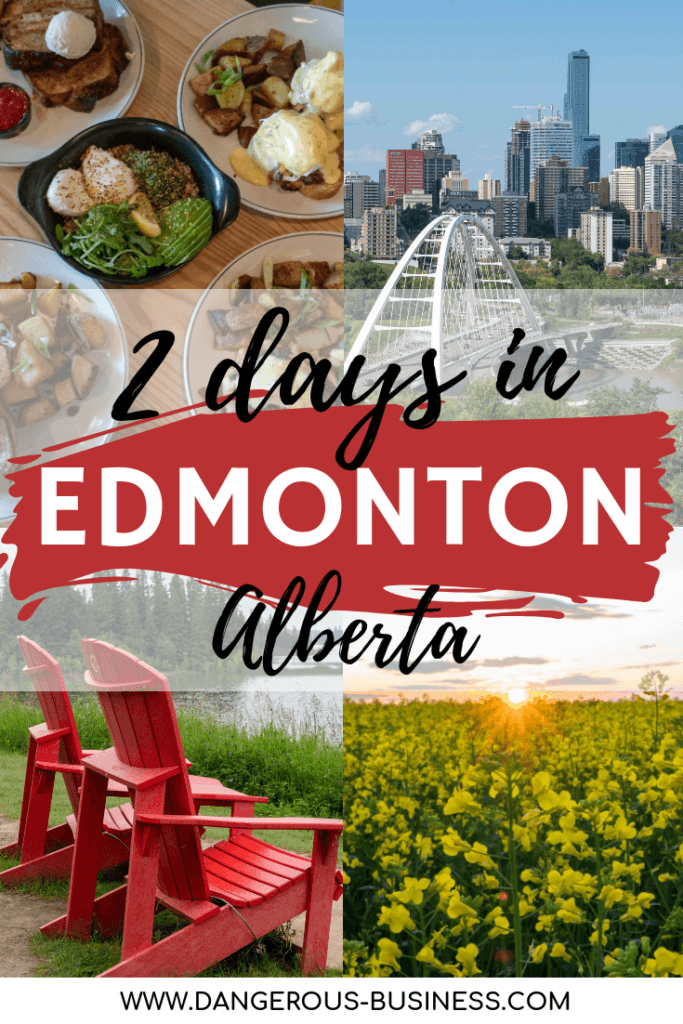 6 Comments on “2 Days in Edmonton: A Summer Weekend in Alberta’s Capital”