As another year comes to a close, you know what that means: time for another year-in-review post!

I always have fun putting together this list each December; it's a great way to take a look back at my year, remembering all the amazing adventures and destinations I got to experience. It's always a humbling task, too, as I'm reminded just how lucky I am to still be doing what I love as my job.

My travels in 2018 were quite varied, covering 3 continents, 8 US states, 2 Canadian provinces, and several islands in various corners of the world. I traveled somewhere new almost every single month, and yet still managed to strike a decent balance between time on the road and time at home.

And, while it's always difficult to narrow down my adventures to just a few highlights, here were my top 10 from my 2018 travels:

10. Getting my music on in Nashville

Even though it's not all that far from where I live in Ohio, I'd somehow never managed to make it to Nashville before 2018. And shame on me, because Music City is super cool!

I'm not a country music fan by any stretch, but the music *history* in Nashville is fascinating. I spent a couple days in June doing all sorts of things I never expected to do, including touring the Ryman Auditorium, visiting the Country Music Hall of Fame and Museum, and seeing a show at the Grand Ole Opry.

I enjoyed Nashville so much that I've already planned another trip there in 2019!

>> Read more: Getting a Taste of Music History in Nashville

I've gone to the Women in Travel Summit the last two years, and in 2018 WITS was held at the incredible Fairmont Le Château Frontenac in Quebec City. The location itself was the major draw for me, and I loved getting a feel for Quebec City in between going to conference sessions.

But the highlight was definitely staying at the Fairmont Le Château Frontenac itself, one of the Fairmont hotels that was built as a grand railroad hotel in the late 1800s. The hotel looks like a castle, and I referred to it as “Canadian Hogwarts” the whole time I was there.

>> Read more: Fun Facts: Things You Might Not Know About Quebec City

Since I was going to be in the UK anyway this past summer, I decided a week in one of my favorite cities was in order – especially since it had been a while since I spent any time in London.

I ended up being in London during a heatwave in late June, which wasn't exactly ideal (especially since I had packed for much cooler weather in Ireland and Scotland!). But my London mission was still achieved: I went to a ton of themed afternoon teas in order to write about them.

From Harry Potter to Sherlock Holmes to Alice in Wonderland, the themed teas I went to were nothing short of magical. And I've decided that I'm going to try a new afternoon tea every time I find myself in London so that I can update/add to my list!

>> Read more: A Guide to the Most Unique Themed Afternoon Teas in London

7. Going on an Outlander tour in Scotland

Speaking of the UK, another highlight was going on an “Outlander”-themed tour around Scotland with my mom and sister.

The 3-day tour took us to all sorts of cool spots in the Highlands, from Culloden Battlefield to Doune Castle to small towns like Falkland. It was an excellent mix of popular touristy sites and places you might never otherwise visit – and of course the Outlander ties were fabulous!

My mom and I are big “Outlander” fans and of course loved this themed tour. But even my sister, who only saw about half a season of “Outlander” the week before our tour, really enjoyed getting to see so many different spots in Scotland.

>> Read more: Geeking Out on an Outlander Tour of Scotland with Highland Explorer Tours 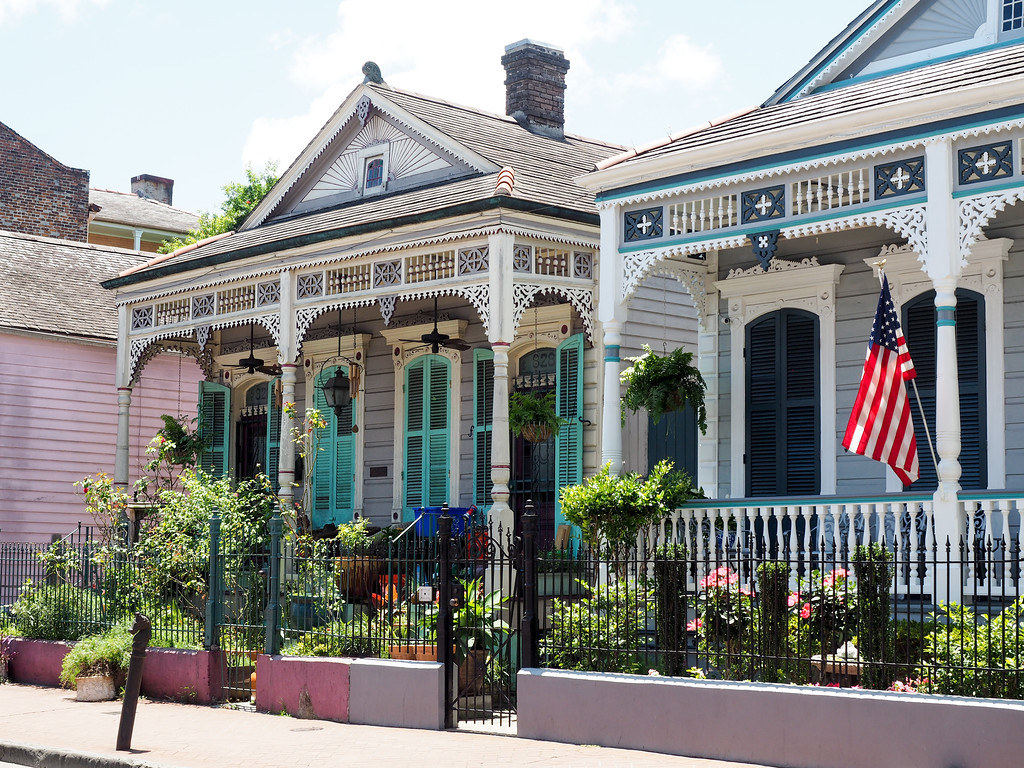 This past spring, I went to New Orleans for the second time with some girl friends. NOLA remains one of my favorite cities in the United States, and it was just as great the second time around. Even though it was already hot and sticky by late May, we saw and did (and ate!) a lot in just a few days.

Highlights of my second trip to New Orleans included a food tour of the French Quarter, having lunch at Commander's Palace, going to Mardi Gras World again, and visiting a nearby plantation. I'm not sure I'll ever get tired of visiting this city!

>> Read more: How to Have a Classy Girls Weekend in New Orleans

My only jaunt over to Europe proper this year began with a weeklong road trip in Ireland with my mom and sister. Even though I was a little bit nervous about driving in Ireland, road tripping really is the best way to explore the Emerald Isle – and I'm happy to report zero driving incidents!

We skipped Dublin on our trip, and instead focused mostly on the west and south of Ireland. We had afternoon tea at Ashford Castle, listened to traditional Irish music in Galway, toured the House of Waterford Crystal Factory in Waterford, fell in love with the colorful town of Cobh, toured the Rock of Cashel, and even stayed overnight in a castle, among other things.

I really love road tripping, and this Ireland road trip convinced me that I need to do some more road trips in Europe!

4. Hanging out with flamingos in Aruba 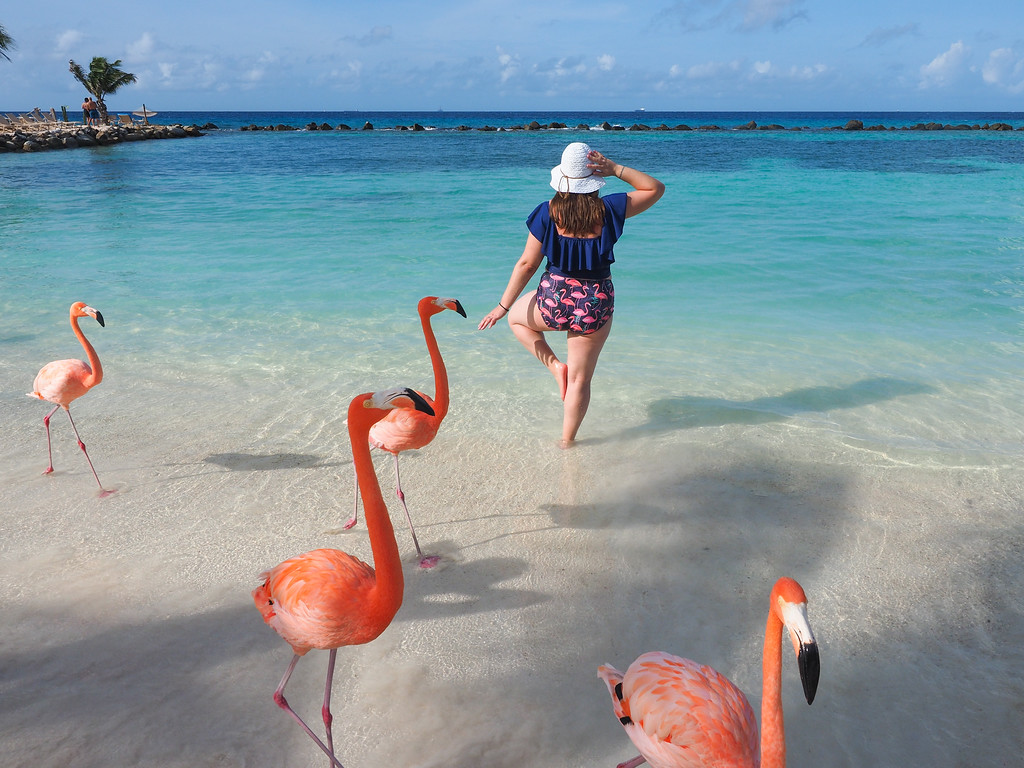 My first wedding anniversary with my husband, Elliot, has somehow already come and gone! We decided to celebrate by going somewhere warm – and when looking for tropical destinations that aren't far from the US to visit in October, Aruba quickly won out since it's outside of the Hurricane Belt.

And, while I enjoyed off-roading in Arikok National Park and going on a snorkeling cruise, my favorite day on Aruba was when we hung out with flamingos and rented a private cabana on Renaissance Private Island. It was a day of pretty much pure relaxation, and I think I had a smile on my face the entire time.

3. Getting up close with icebergs in Greenland 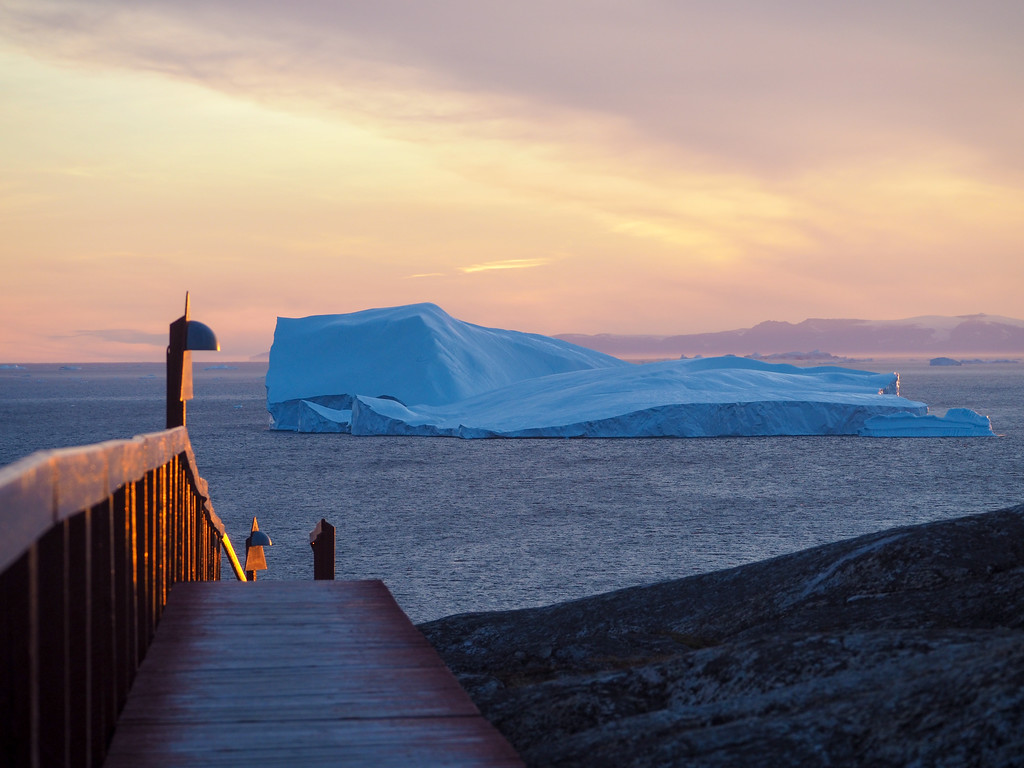 Since I went on a trip this summer with my mom and sister, it was only fair that I take my dad somewhere, too. My dad loves nature and the outdoors, and I've always been drawn to the world's Arctic regions. So a trip to Greenland was the perfect fit.

I also introduced my dad to Iceland for a few days, but we both agreed that Greenland was the best. We spent 4 nights in Ilulissat, a town above the Arctic Circle on Greenland's west coast. We took boat tours out to see icebergs and glaciers, got to know some of Greenland's sled dogs, went on a hike to the UNESCO-recognized ice fjord, took a flightseeing tour over icebergs in the fog, and watched several incredible Arctic sunsets.

Greenland is one of those destinations that's still relatively “undiscovered” by most tourists, so it was really cool to visit. I'm ready to go back already!

>> Read more: Greenland Travel Guide: How to Plan a Trip to Ilulissat

2. Seeing polar bears in the wild in Manitoba 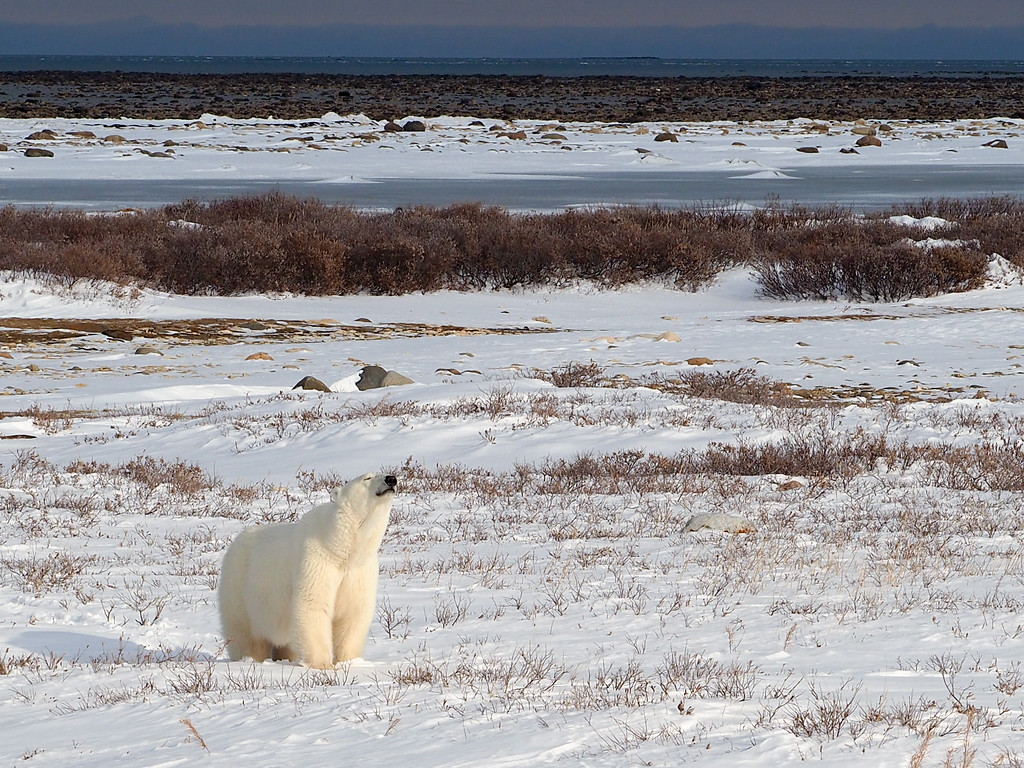 I wasn't kidding when I said I have an affinity for the Arctic; two of my top travel experiences of the year happened in the North! But whereas my time in Greenland was all about ice, my time in Canada's sub-Arctic was all about bears – polar bears, to be exact.

The small town of Churchill, Manitoba, is known as “The Polar Bear Capital of the World.” For about a month and a half every autumn, the big white bears gather around Churchill as they wait for the Hudson Bay to freeze. Because the bear population here comes so close to an inhabited area, polar bear tourism has been big business for decades.

The trip was worth every penny and even better than I could have imagined.

>> Read more: How to See Polar Bears in Churchill: A Polar Bear Tour for Your Bucket List 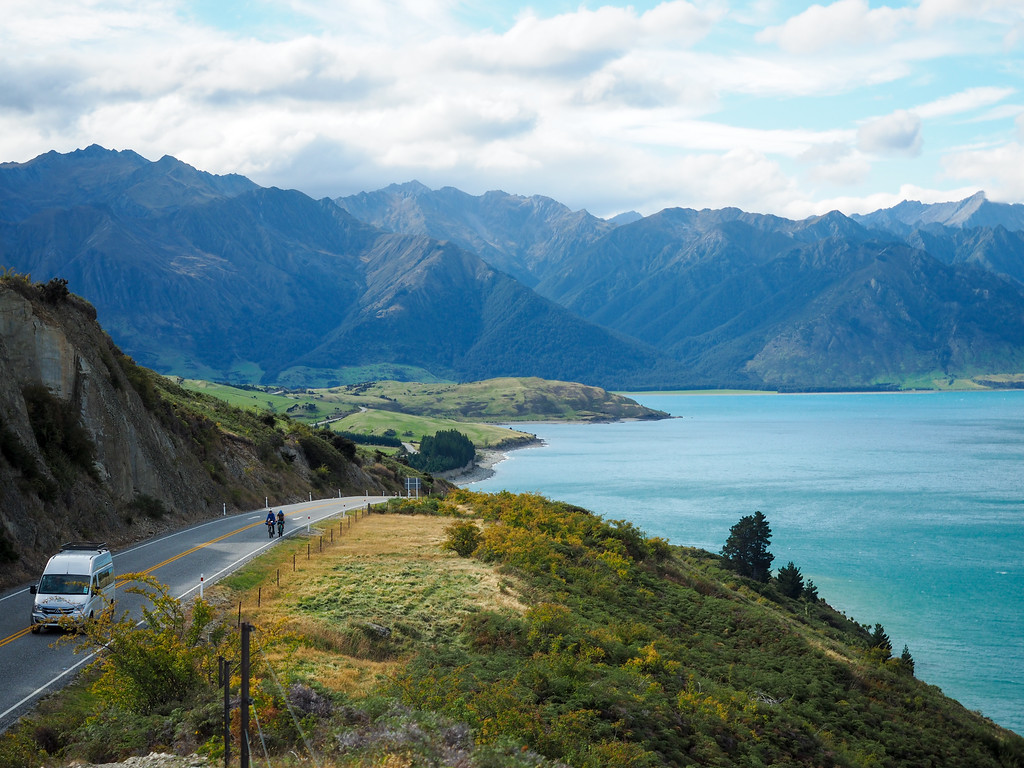 Even though the polar bears were hard to top, my top travel highlight of the year happened way back in March. Elliot and I got married in October of 2017, but we decided to delay our honeymoon so we could save up some more money and go to New Zealand at the end of their summer.

We rented a campervan for two weeks, and road tripped New Zealand from top to bottom. I showed him some of my very favorite places like the Coromandel Peninsula, Hobbiton, and Wellington, and we went to some places I hadn't been before like Abel Tasman National Park and Moeraki.

We had lots of adventures beyond driving on the “wrong” side of the road, too, including going jet boating in Glenorchy, and tandem bungee jumping in Queenstown. A few of our epic plans got canceled because of weather, but it still ended up being an amazing and memorable trip.

>> Read more: 12 Things to Do on an Adventurous Honeymoon in New Zealand or New Zealand Road Trip: The Perfect Itinerary if You Only Have 2 Weeks

So there you have it: my travel highlights from 2018! 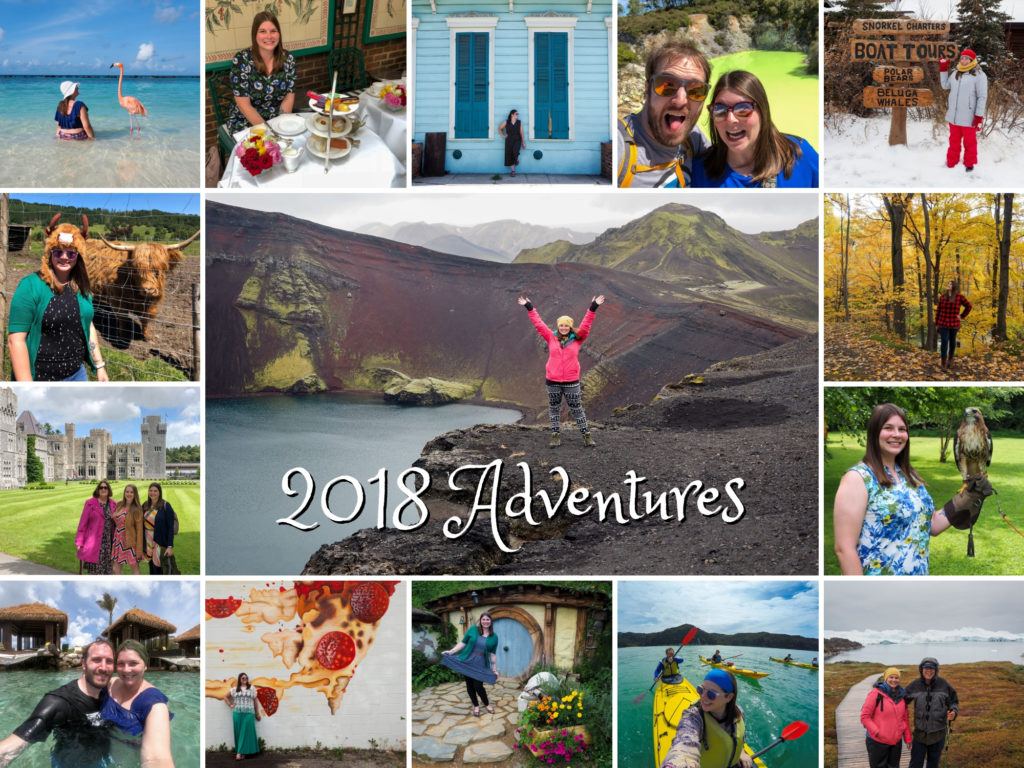 There were plenty of moments that didn't quite make the list, like soaking at the Blue Lagoon with my dad in Iceland, speaking at TravelCon in Austin, Texas; mentoring at Bloghouse in Memphis, Tennessee; touring the Biltmore Estate in Asheville, North Carolina; and doing more fun things in Ohio like falconry in Columbus. But I had to end the list somewhere!

Here's hoping your 2018 was great, too, and that you have even more exciting travels in 2019. (I've already got a lot of fun things planned!)

What were some of YOUR travel highlights in 2018?