Ohio Adventures: How to Have a Manly Weekend in Columbus

Home » United States » Ohio » Ohio Adventures: How to Have a Manly Weekend in Columbus

Columbus, Ohio, is known for a few things. It's the capital city of Ohio, and also the largest city in the state. It's known for sports-centric The Ohio State University (yes, the “The” is actually part of the university's name). And the Columbus Zoo, along with its Director Emeritus Jack Hanna, is world famous, especially for its gorillas.

Most people in Ohio know these things about Columbus. They've probably visited at least once to go to the zoo, or to check out an exhibit at COSI (Columbus' hands-on science museum). They've maybe even seen the famous Buckeyes play at Ohio Stadium.

But I'll bet not all Ohioans know that you can take a falconry class, see a topiary park, or visit up to 41 craft breweries in the greater Columbus area. 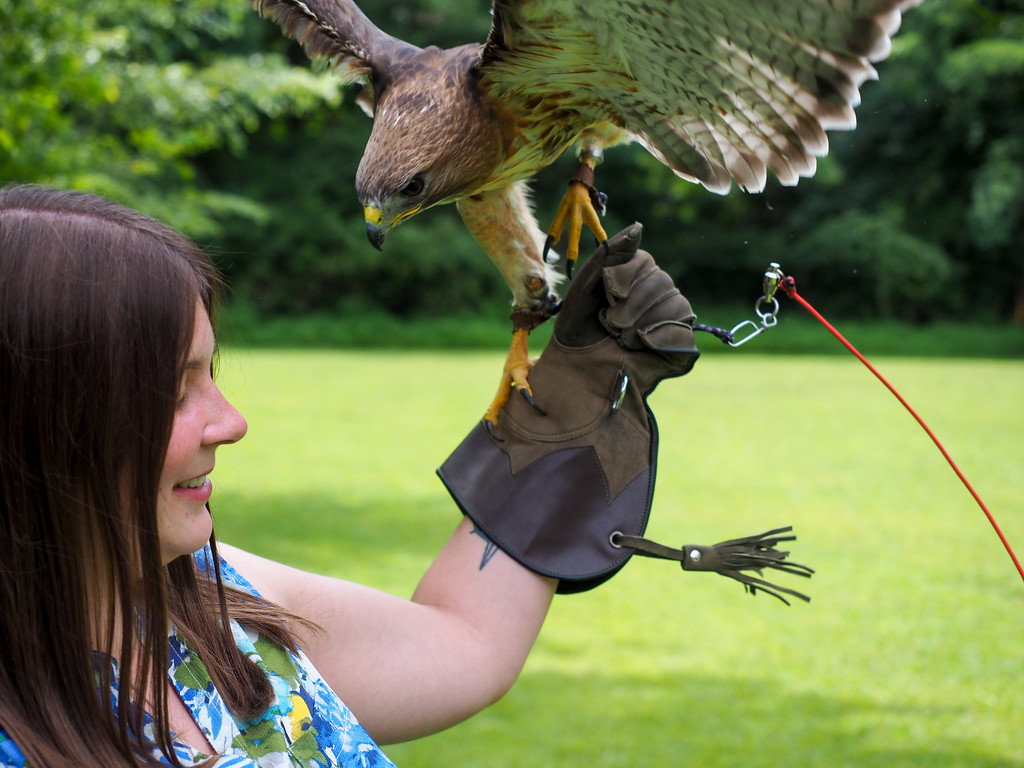 When my husband, Elliot, and I started talking about planning a little weekend getaway to Columbus this summer, I knew we didn't want to just do “the usual” things in Columbus.

And as we started researching some of the more unusual/unique things to do in Columbus, a theme began to emerge: from axe throwing to falconry to distillery tours, our weekend began to take on a distinctly “manly” trajectory.

So we decided to just embrace it.

Whether you're planning a bachelor party in Columbus, or just a fun couples' getaway like we did, here's how to have a “manly weekend” in Columbus.

The best “manly” things to do in Columbus

Walk along the Scioto Mile

Because the outdoors are manly

After driving 2 hours down to Columbus and checking in to our hotel, we headed downtown to take advantage of the nice late afternoon weather. Our destination was the Scioto Mile, a riverfront park crisscrossed with bike trails and green spaces that stretches along the Scioto River from the Arena District to Columbus' Whittier Peninsula.

And while the green space and downtown views were nice, I was obsessed with finding the 3 deer statues scattered throughout the park. “Scioto” is a Native American word for “deer,” but these statues aren't *just* deer. They're deer posing like humans, and I couldn't get enough of them (especially the one standing on the Rich St. Bridge)! 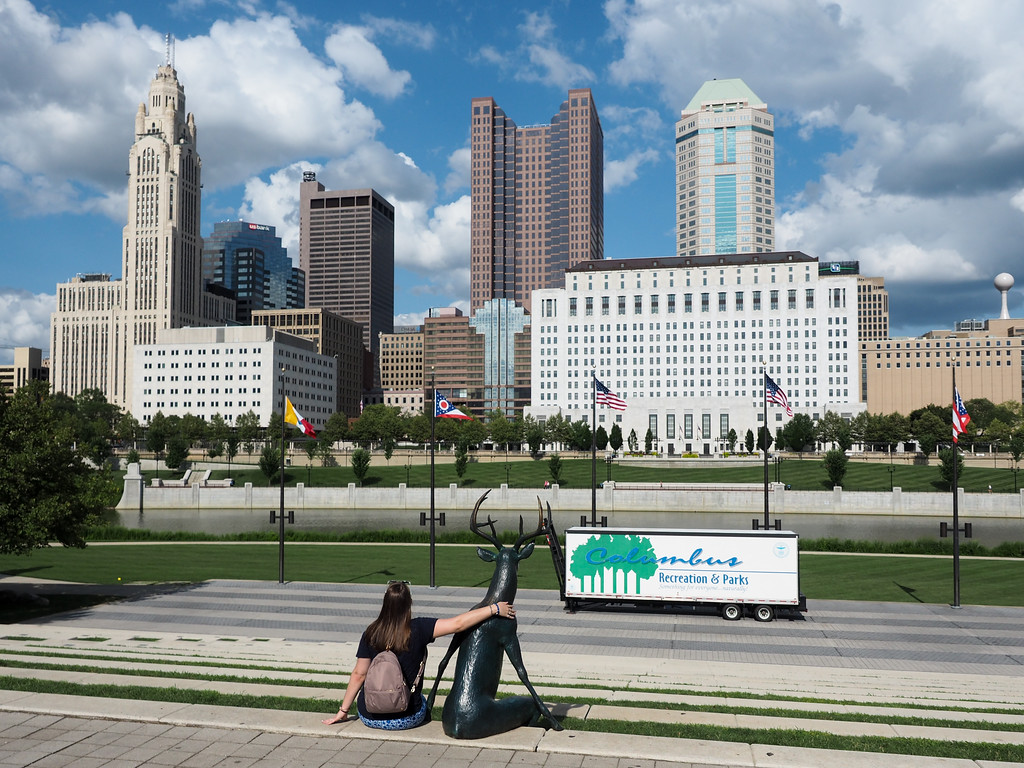 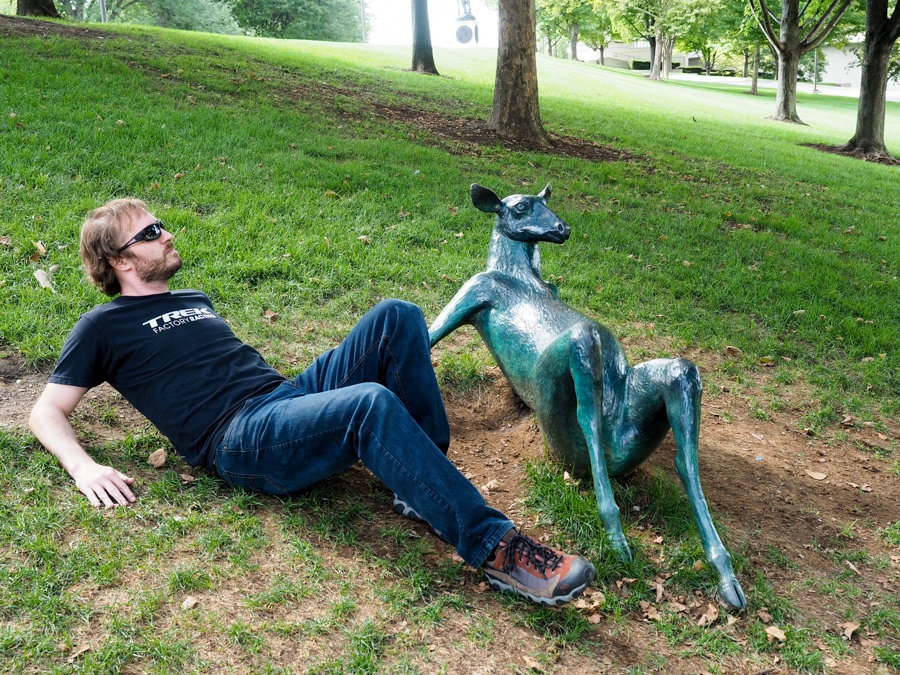 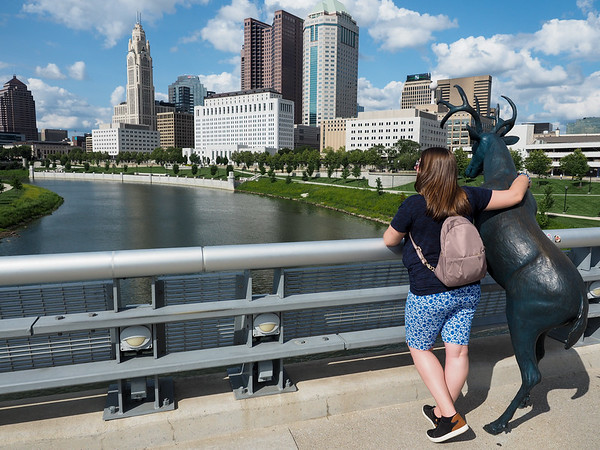 Deer are definitely manly, so these fit in perfectly with the theme of our weekend.

Because lumberjacks are manly

After a nice walk along the river (and maybe a few too many deer photos), we grabbed dinner and then headed uptown to Stars Indoor Sports, where we were going to try out something new: axe throwing!

Columbus Axe Throwing is perfect for a fun date night activity, and would also be great for a bachelor party since you can have up to 12 people per “lane” and can grab a beer at the concession stand to sip as you throw.

We had no idea what to expect from this axe throwing experience, but we both ended up LOVING it. An instructor first showed us how to properly handle and throw the axes, and then after some practicing we began playing some games. There were only 4 of us booked in for our time slot, so we got a lot of throws in! 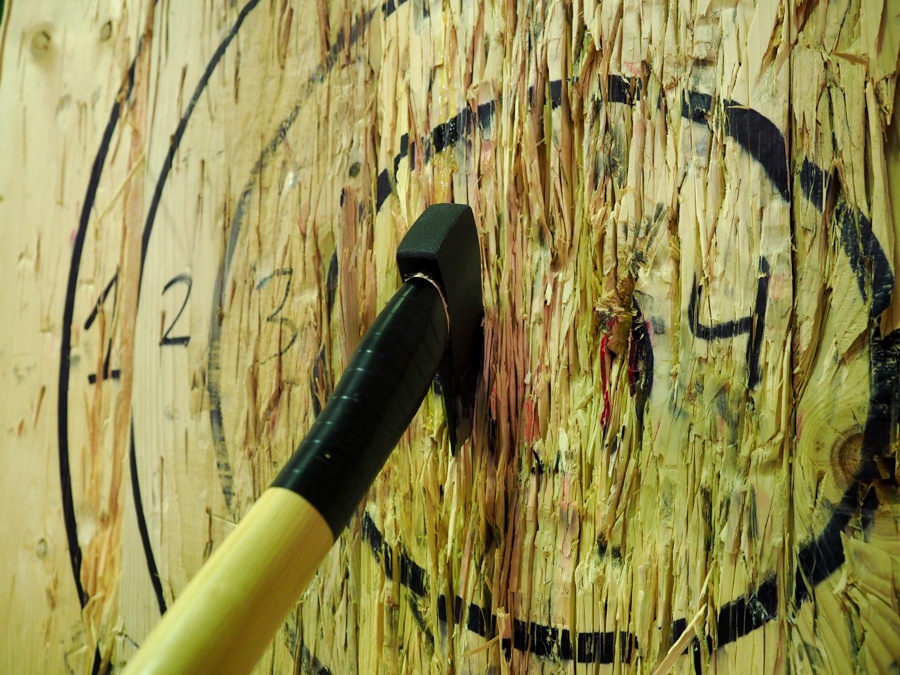 This is definitely something we'll be doing again!

Because chainsaws are manly 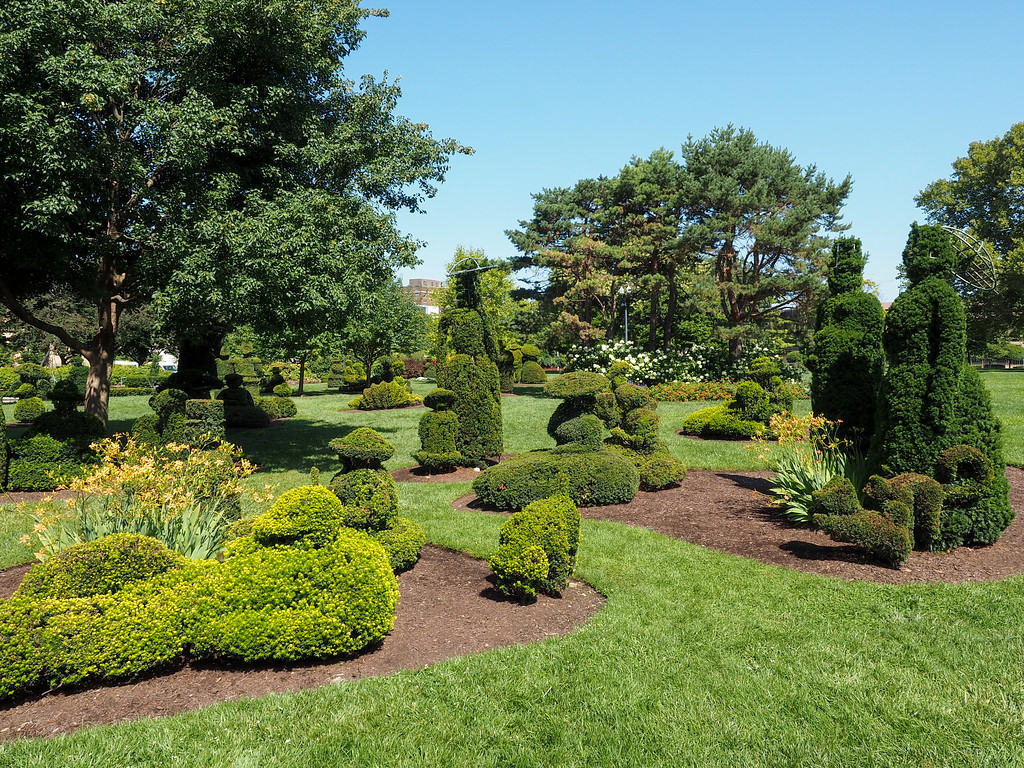 When I heard that there was a topiary park in Columbus, I knew we had to go check it out. I rationalized it by pointing out that topiary is shaped using all sorts of manly tools like chainsaws, which meant it totally fit in to our itinerary. (Right?!)

The topiary park is located in the Old Deaf School Park, which sits on the former site of the Ohio School for the Deaf in what is today a residential neighborhood not far from downtown. 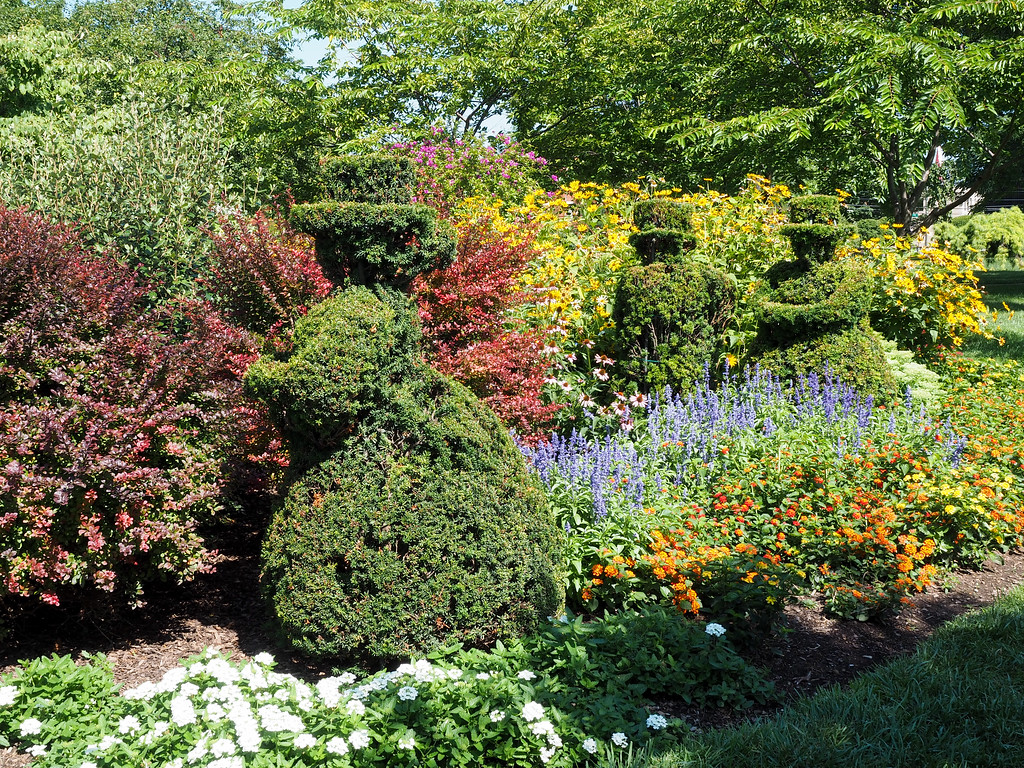 The Topiary Park itself was created in 1988, and is super unique. The topiary creations recreate Georges Seurat’s painting A Sunday Afternoon on the Isle of La Grand Jatte – likely the only topiary version of a painting anywhere in the world.

No trip to Columbus would be complete without spending time in the hip Short North neighborhood. Artsy and full of cool restaurants and shops, this neighborhood is one of our favorites in Columbus. It's explore-able on foot, and that's exactly what we did.

Some Short North highlights include: 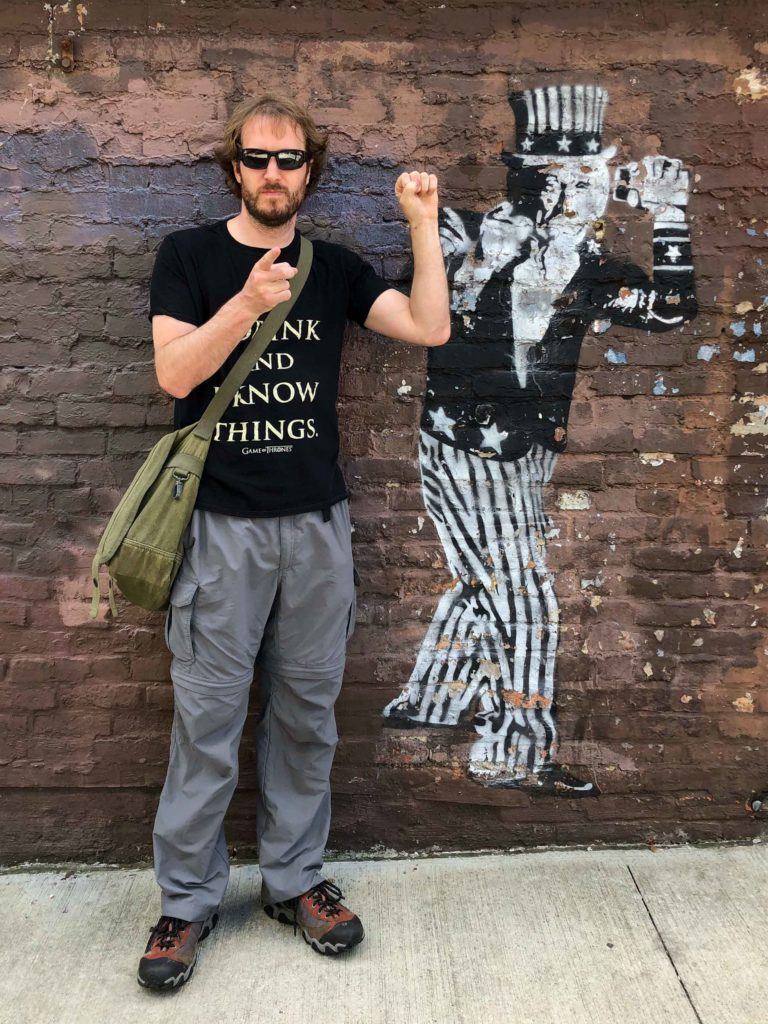 We also made sure to visit the Arnold Schwarzenegger statue outside the convention center. And if you're wondering why we have an Arnold statue in Ohio, it's because the annual Arnold Classic sports/bodybuilding competition takes place right here in Columbus every year. 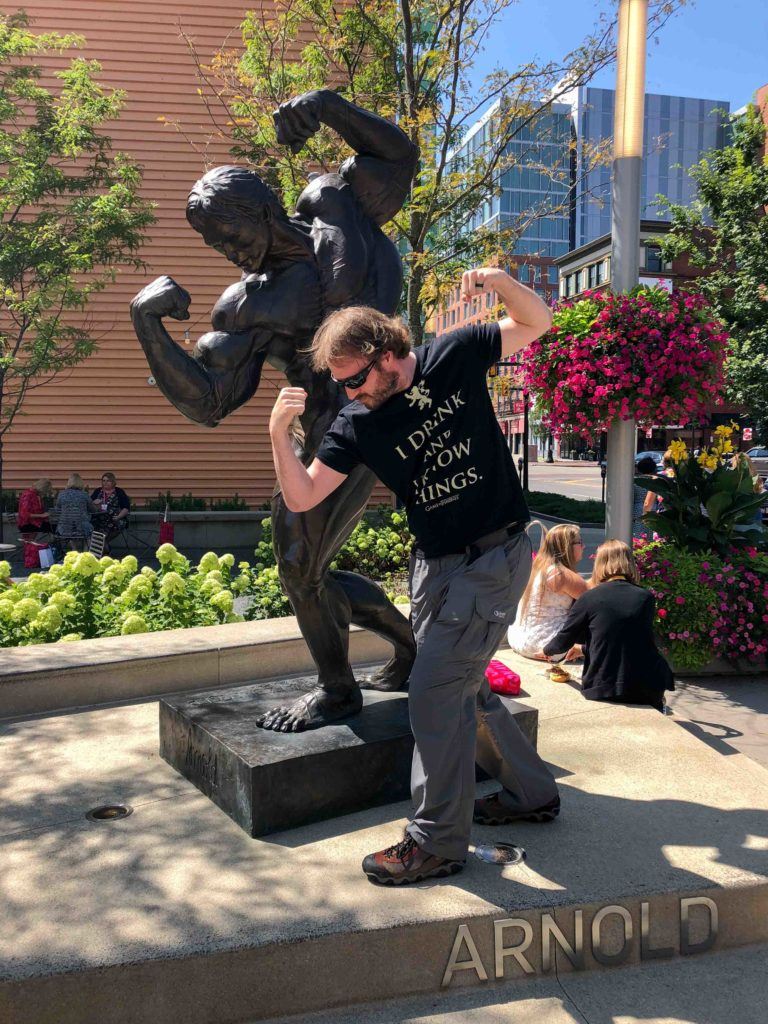 Lastly, don't skip out on North Market, a staple of the Short North. This market dates back to 1876, and is a favorite with both locals and tourists. There are tons of places to eat, plus stands selling everything from meat to donuts to beer. 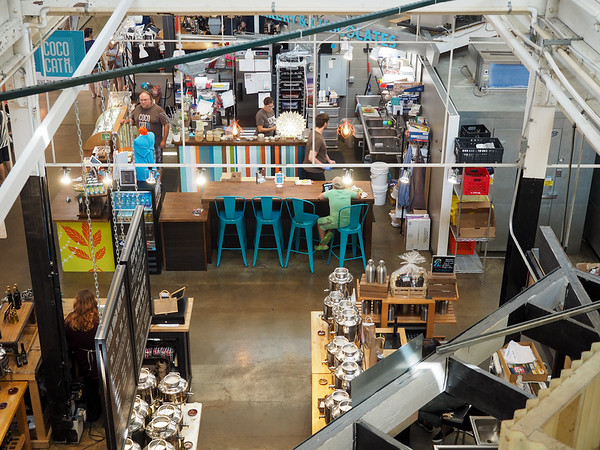 Tour a brewery or distillery

Because craft booze is manly

Columbus is home to fewer than 41 different craft breweries, and half a dozen distilleries – meaning you could spend a whole weekend visiting them and still only scratch the surface.

For those interested in Columbus' beer scene, check out the Columbus Ale Trail, or join a tour with Columbus Brew Adventures.

Since Elliot is more of a fan of spirits than beer, we decided to do a distillery tour instead, opting to check out Watershed Distillery. Founded in 2010, Watershed is a small distillery that makes mostly bourbon and gin, and is still mostly a family affair – we got our tour from the father-in-law of one of the founders.

A $15 distillery tour here gets you up to 6 different tastings of their spirits, which is super great value! (And I even found a drink I like – their Nocino is delicious!)

Because sports are manly

Could we really go to Columbus and NOT do something sports-y? Columbus is such a sports-loving city that there's a good chance there will be some sort of game on when you're in town. If it's not an OSU team playing, it might be the city's NHL hockey team, its MLS soccer team, or its Triple-A baseball team.

We happened to be in town when there was a big gymnastics event on – the GK Classic – and I convinced Elliot to go because Simone Biles (yes, Olympic star Simone Biles) was going to be competing. (It didn't really take a whole lot of convincing, to be honest!)

Fly hawks with the Ohio School of Falconry

Because birds of prey are manly

Start off the last day of your manly weekend in Columbus with a bang – or a squawk. The Ohio School of Falconry offers educational and fun introductory falconry “classes” every weekend from April through December at Columbus' Camp Mary Orton.

I know very little about falconry and wasn't entirely sure what to expect from this experience, but it turned out to be an amazing morning! Not only did we get to meet (and hold) several birds of prey from a Eurasian Eagle Owl to a Red Tailed Hawk, but we also got to “fly” a Harris Hawk to and from our gloves.

These birds are so beautiful, and I loved getting the opportunity to interact with them and learn more about bird conservation.

We did the “Walk With Hawks” class, which lasted about 2 hours and introduced us to a handful of different birds. My only tip is to book in advance, as classes do sell out!

Because… bricks are manly?

End your Columbus weekend with a trip to German Village. This quiet, leafy neighborhood just south of downtown was settled in the early 19th century by German immigrants (hence the name), and has been extremely well-preserved.

The neighborhood was added to the National Register of Historic Places in 1974, and you do kind of feel like you've entered another time period when you stroll down its brick-lined sidewalks.

Top things to do in German Village include:

And be sure to allow some time to just walk. The houses here are all so pretty – just be prepared to want to move here after about an hour!

Manly places to eat in Columbus

Columbus has lots of fun restaurants to try out. Here were some of our favorites:

Manly places to drink in Columbus

You can of course just go brewery-hopping, but here are a few other cool places to check out:

Where to stay in Columbus

When it comes to deciding on where to stay in Columbus, there are a couple things to consider. These include: proximity to downtown, price, and parking. We, unknowingly, planned our Columbus trip the same weekend as the Ohio State Fair, meaning many hotels were sold out and rates were higher than normal.

Because of this, we opted to stay outside of downtown in order to get a better room rate and also avoid crazy overnight parking costs.

And if you'd rather stay outside of downtown, I recommend:

READ NEXT: How to Spend 48 Hours in Cincinnati, Ohio

Did you know you could do all of this in Columbus, Ohio? Who's ready to plan a trip? 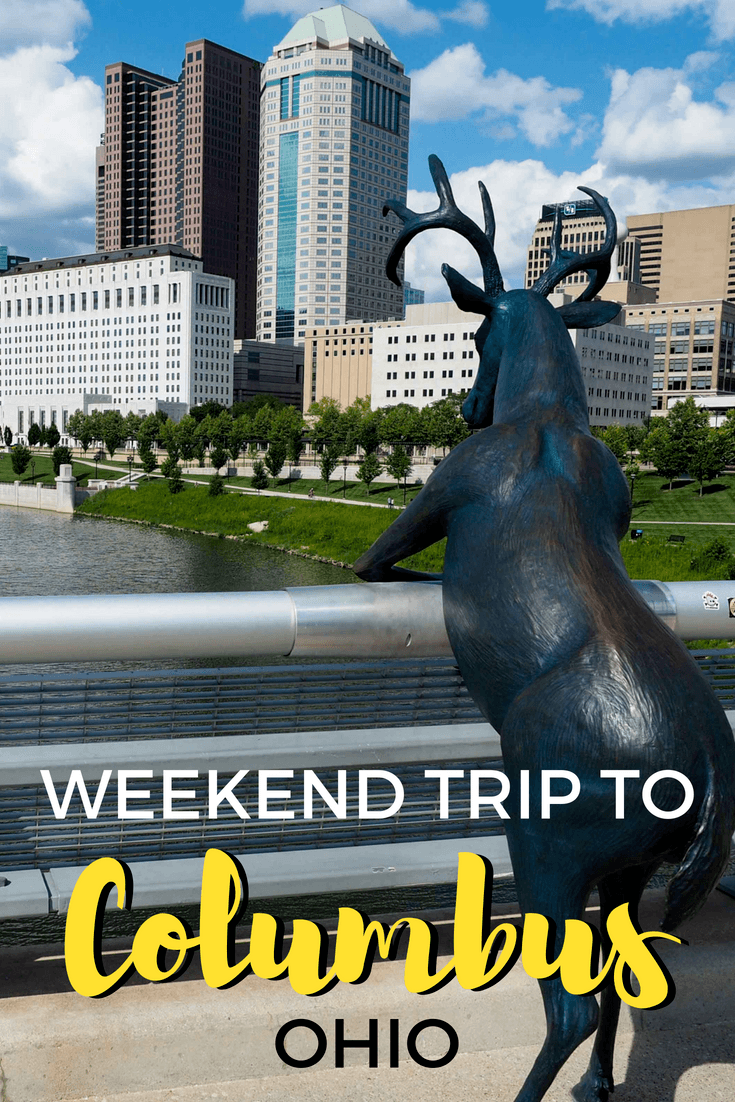 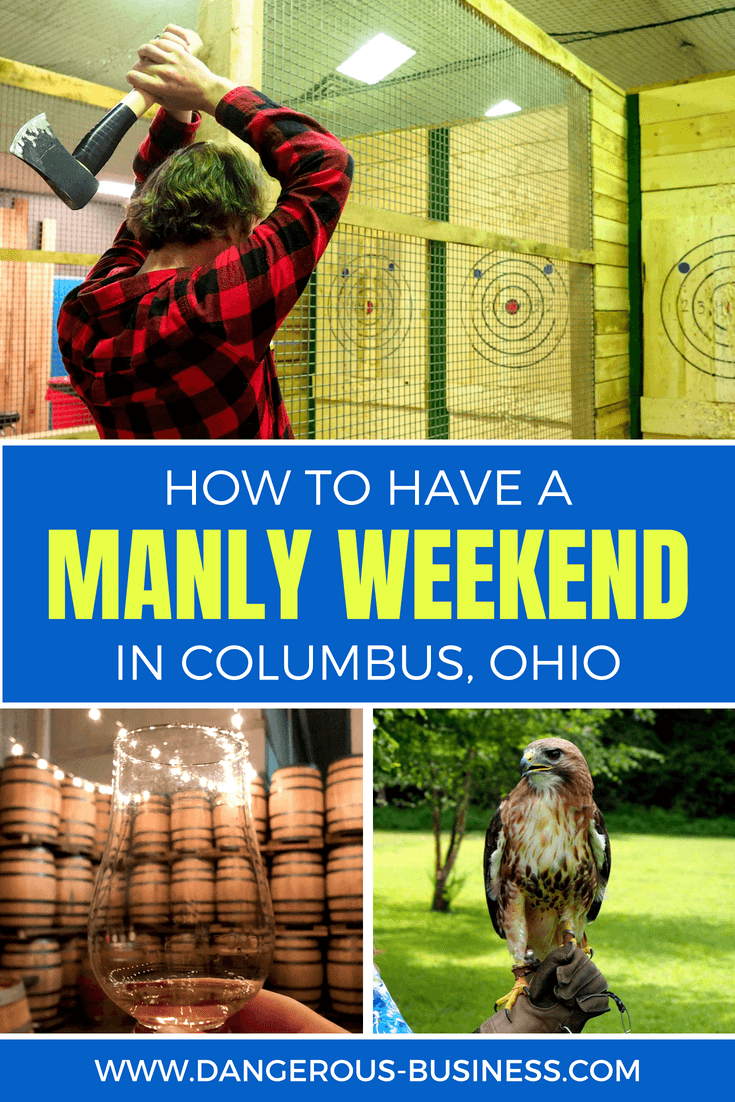 10 Comments on “Ohio Adventures: How to Have a Manly Weekend in Columbus”