How to Have a Classy Girls Weekend in New Orleans

Whether it's food, music, history, or just its southern vibe, New Orleans has become an increasingly popular tourist destination in the US – and not just for Mardi Gras. People from all over the world flock to New Orleans every year, and the city ranks up there as one of my very favorites.

And why is it one of my favorites? Because you can visit New Orleans for just about any type of trip. Want to have a romantic getaway? NOLA has you covered. Planning an epic bachelorette party? Yup, you can go to New Orleans. Looking for family-friendly fun? Yes, you can even find that in the Big Easy.

But I think my favorite type of New Orleans trip has to be the girls getaway – this city is absolutely PERFECT for hanging out with your best gal pals. There's a ton to do (and eat and drink) no matter what your interests are, and the popular parts of the city are safe for women day or night. 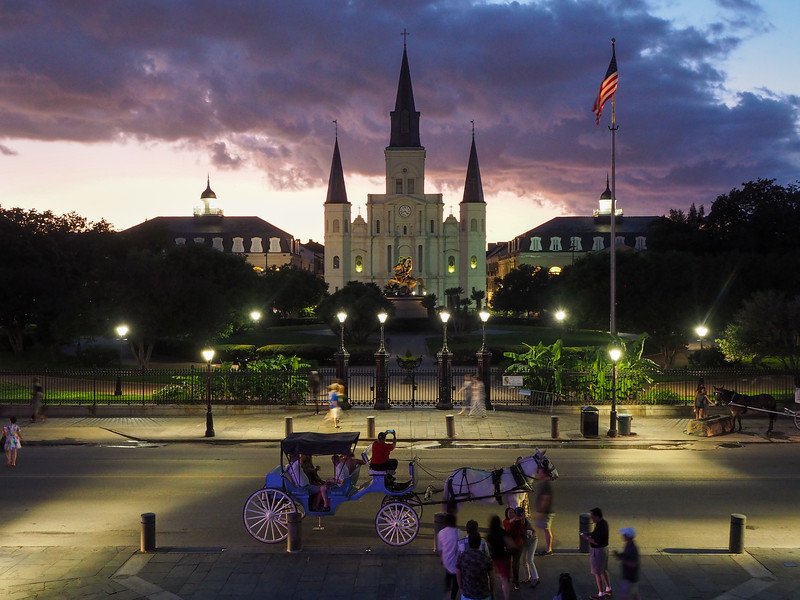 The theme for my most recent New Orleans trip was definitely the “classy girls weekend,” filled with food, sightseeing, and lots of fun.

If you're interested in planning your own classy girls trip to New Orleans, here's what you should consider doing.

A classy girls weekend in New Orleans: What to do

I recommend a long weekend girls trip (at least 3 days) in order to fit all of this in, but you could certainly pick and choose if you only have 2 days, too!

Check out the architecture of the French Quarter

The French Quarter is the oldest and most famous part of New Orleans. This is where the city was first settled, and where you'll still find the heart and soul of it. Bourbon Street and Jackson Square can get a bit crowded and crazy, but there are plenty of quieter streets to explore if you just want to enjoy some of the wrought-iron balconies and Creole-style cottages that this part of New Orleans is known for.

My favorite street is probably St. Ann, where you can find lots of colorful doors and shutters, but not too many people. Parallel streets like Orleans and St. Peter also have super cute cottages, and the leafy Esplanade Avenue that separates the French Quarter from Faubourg Marigny has some beautiful homes, too. 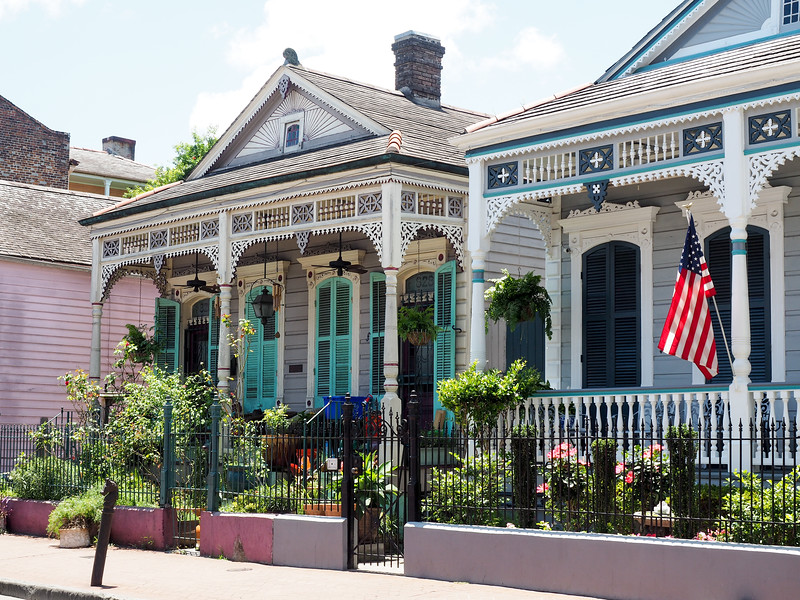 If you're looking for a new profile pic for Instagram, this is the perfect part of New Orleans for a little photo shoot!

Admire houses in the Garden District 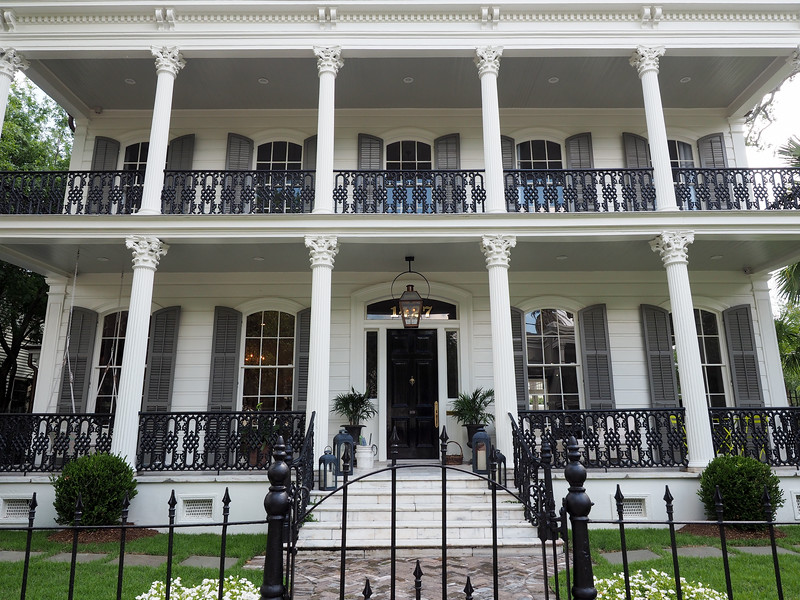 Whereas the French Quarter is where the first settlers began building in New Orleans back when Louisiana was still owned by the French, the Garden District is where all the Americans settled once the Revolutionary War was over and the Louisiana Purchase brought New Orleans into the fold of the United States. The architecture in the Garden District, therefore, is much different to what you'll find in other parts of the city.

There's not a whole lot to do in the Garden District other than walk around to look at the beautiful mansions, but the leafy streets and lack of traffic make this a great option for a morning or afternoon stroll. If you want to learn more about the neighborhood and its famous homes, I recommend signing up for a walking tour of the Garden District, which will also include a stop at Lafayette Cemetery No. 1. 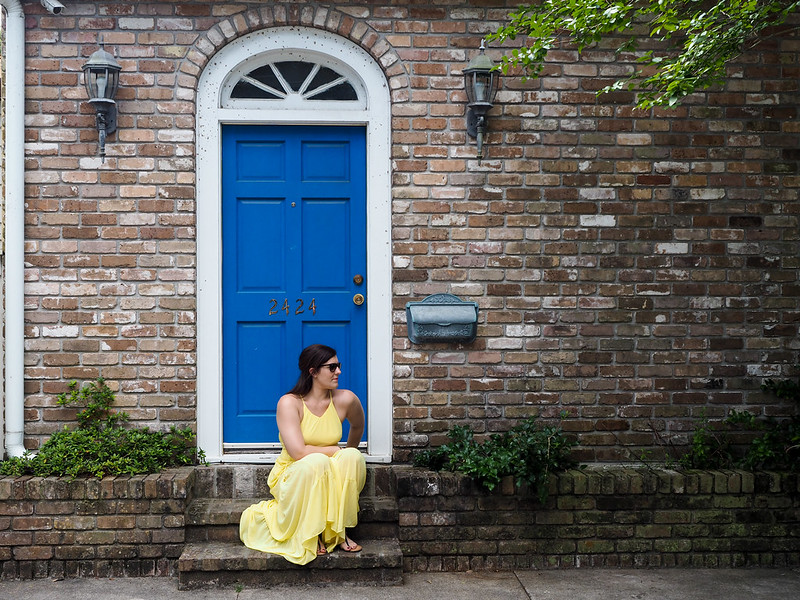 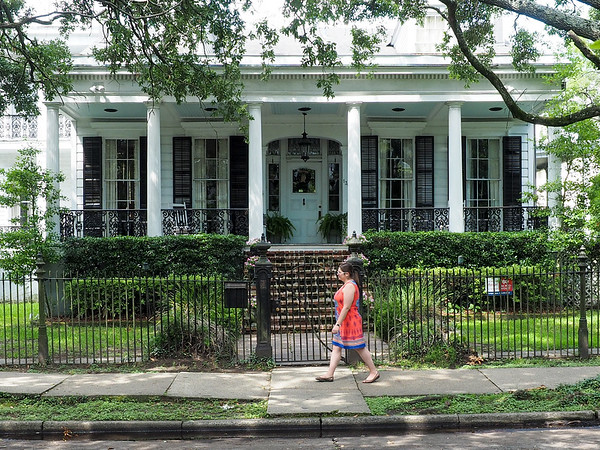 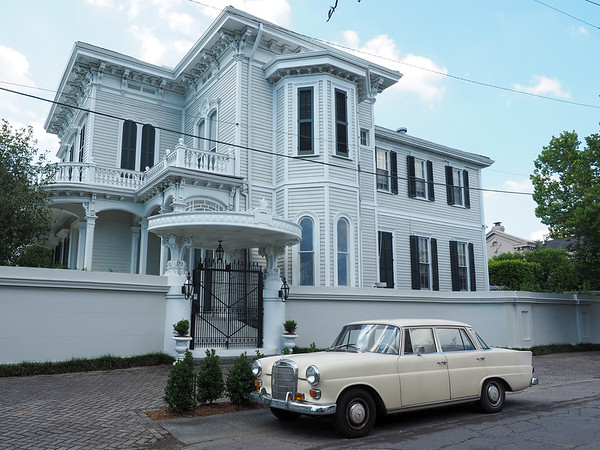 Afterwards, either head north to catch the St. Charles Ave. street car (also a beautiful part of the city), or go south to check out the shops and cafes along Magazine Street.

Go out for a fancy brunch

I feel like going out for a fancy brunch is a staple of any good girls getaway, and New Orleans definitely knows how to do a great brunch!

One of the more delicious brunch options in the city can be found at Willa Jean (seriously, their BBQ shrimp and burrata toast will change your life), and I also had delicious breakfast food at the Ruby Slipper Cafe. But if you're looking for something a little more special, I recommend going for a meal at Commander's Palace in the Garden District.

There's a dress code here and you'll need to make reservations in advance, but the whole experience is absolutely worth it! Even though there are white tablecloths and white gloves, the service is anything but stuffy – and the food is pretty great, too!

Commander's Palace only does its famous Jazz Brunch on Sundays, but you can do what we did and just book an early lunch on a weekday for a very similar experience. The turtle soup and bread pudding souffle are both must-tries!

Other New Orleans restaurants known for their more classical brunches include Arnaud's, Brennan's, Court of Two Sisters, and Muriel's.

While the debauchery on Bourbon Street didn't really appeal to me and my friends, that didn't mean we weren't interested in trying one (or two or three) of the cocktails that New Orleans is known for.

Some worth trying include:

Take a food and/or cocktail tour

If you want to learn more about the food and drink unique to New Orleans (the gumbo! the beignets! the po'boys!), then I highly recommend booking you and your girls on a food and/or cocktail tour. Sure, you can eat and drink all over the city on your own, but doing it with a guide will help you learn a lot more about the history behind all those famous dishes and drinks.

On my most recent girls trip to New Orleans, we booked a French Quarter food tour with Dr. Gumbo Tours, and learned all about Creole and Cajun history while trying everything from sweet potato beignets to catfish po'boys to seafood gumbo. It definitely ranks up there as one of the best food tours I've taken – we had 10 different tastings in 3 hours! (Book the same tour here!)

There are also cocktail history tours in NOLA, which would be a great evening tour to take with your group.

OR, Dr. Gumbo also does a combination food and cocktail tour, which includes even more history and 4 full-sized cocktails alongside 8 food tastings. My friends and I weren't up for that many drinks in one go, but this tour is definitely great value! (Check it out here.)

New Orleans is home to some fabulous live music, especially if you like jazz and blues. (And even if you don't particularly love those genres, it's still worth it to catch some live music in NOLA.) Big music fans might want to book a music walking tour in the city, while others might just be happy booking dinner somewhere with live music.

Frenchman Street is definitely the place to go for some of the best live music in the city, with places like The Spotted Cat Music Club and Three Muses being some of the hottest spots in town (just make sure you make reservations!).

Other places where you'll find live tunes include the historic Preservation Hall (home to traditional New Orleans jazz; people start lining up outside an hour or two before a performance), Café Beignet (enjoy pastries AND live music), and spots like Pat O'Brien's or Ticklers if you're into dueling pianos. There are also many musicians and groups that will perform on corners all throughout the French Quarter, so definitely keep an ear out.

Have your fortune told 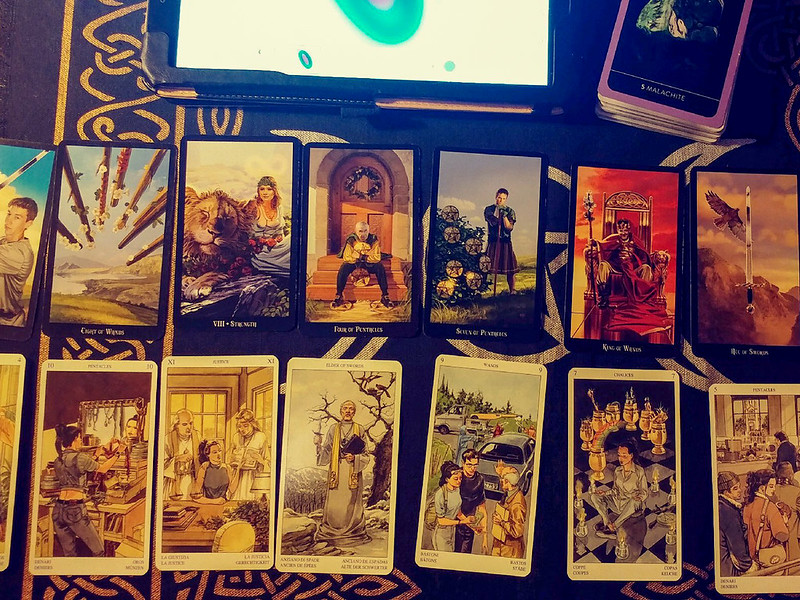 I'm not personally one who puts much stock in psychics and fortune tellers, but with New Orleans' long history with things like voodoo and vampires, it's a good place to suspend disbelief for a few hours. Having your fortune told or your tarot cards read is a popular activity in New Orleans, and also one that is perfect to do with your girlfriends.

My friends had tarot readings at Earth Odyssey in the French Quarter, and Hex is also popular (as is its “Old World Witchery” shop).

Visit a museum or gallery

Visiting New Orleans during the warmer months? Yeah, it gets downright hot and sticky sometimes, so there's no shame in planning some indoor activities, too. New Orleans has some great museums, galleries, and art shops, and visiting a few would definitely make for a classy afternoon.

Some museums to check out include:

There are also a ton of cute (and very well-air conditioned) art galleries in the lower part of the French Quarter – walk along Royal Street and you'll find a ton of them.

Where to stay for a classy girls weekend in New Orleans

There are a LOT of hotel options in New Orleans, but the following would be my picks for a classy, slightly more upscale weekend:

And what about Airbnb or other holiday rentals, you ask? Well, while I do definitely think that renting out a whole apartment or condo would be ideal for a girls trip, the reality is that Airbnb and VRBO and other similar sites aren't entirely legal in New Orleans. Short-term rentals are regulated in the city, but many people illegally list their homes anyway. Airbnb is a sensitive topic in New Orleans with many locals against it, so I would probably avoid it in NOLA – there are so many nice hotels to choose from instead!

Have one more day?

If you have one more day in New Orleans, I recommend getting out of the city for the day and touring a couple of the historic plantations along the Old River Road. Many of the popular plantations are within an hour's drive from NOLA, and many tours will include transportation along with a guide.

Plantations worth visiting include:

Some plantation combo tours to check out include:

Who's ready to plan a classy girls weekend in New Orleans? 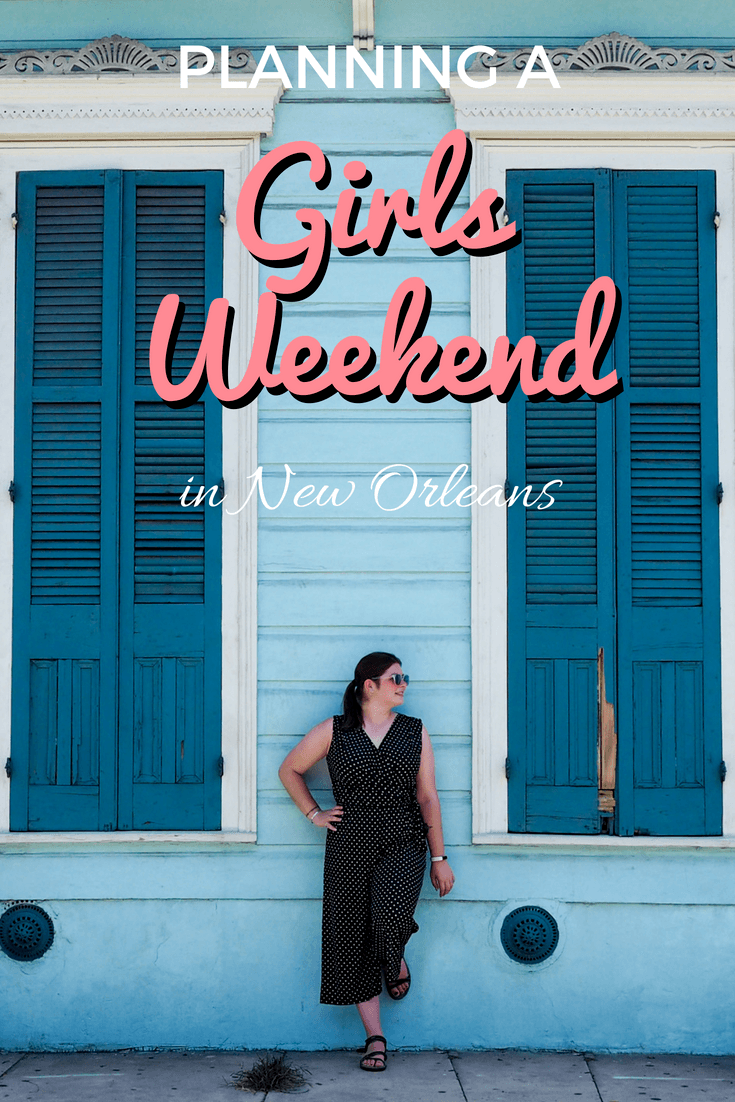 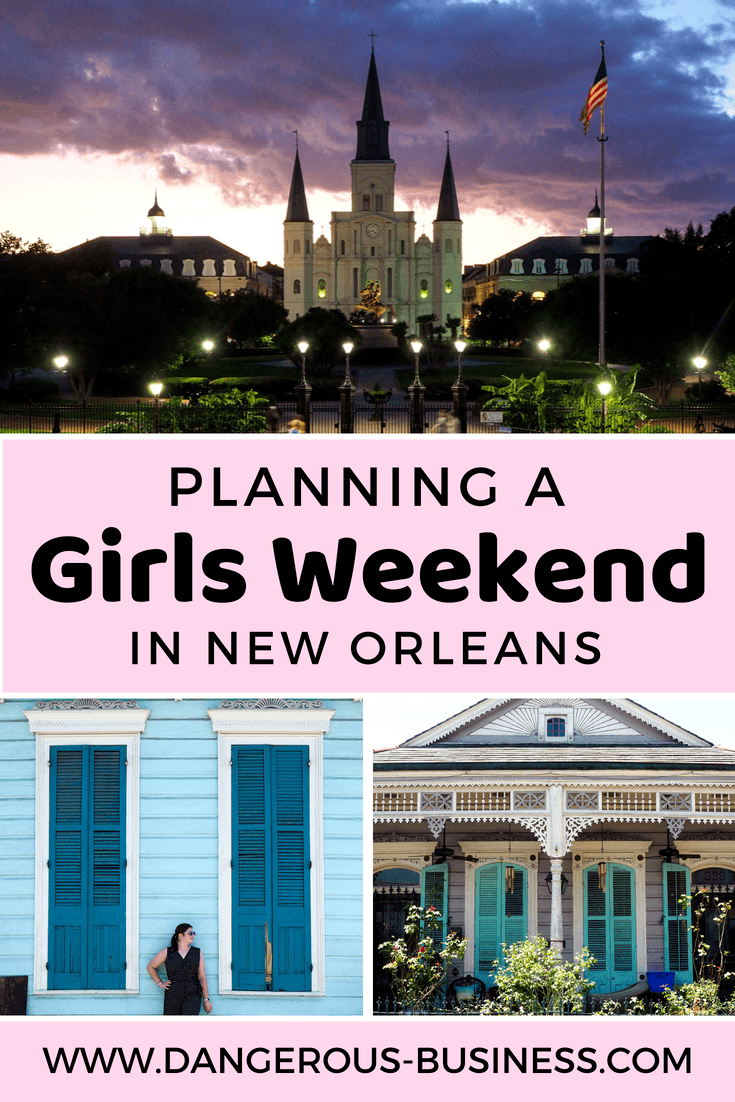