In certain parts of the world, Mother Nature reigns supreme. Places where the land was formed by explosions deep within the earth and shaped by the scrape of glaciers and the shake of earthquakes. Places where weather forecasts are only valid for 15 minutes; where miles and miles of land are uninhabited; and where ignoring Mother Nature can lead to serious disaster.

Iceland is one of these places. 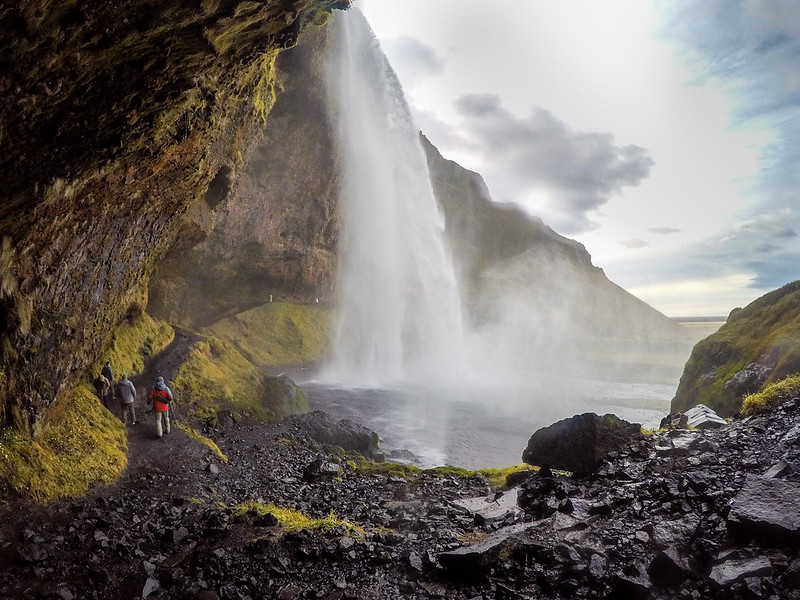 The Land of Fire and Ice is beautiful and its people friendly. But this volcanic island in the Atlantic can be quite sinister, too. Winter hurricanes blow out of nowhere. Strong currents make beautiful black sand beaches deadly. Volcanoes that are long overdue to erupt rumble gently. Mother Nature reigns supreme.

Day 1 of our “Chasing Ice” tour with Goecco started out great – we were picked up on time in Reykjavik by Jonas in his bright yellow, tricked-out Land Rover Defender, and then met up with the rest of our tour group in a beefy Ford van. We hit the road before the sun was fully up, bound for waterfalls, glaciers, black beaches, and ice caves. 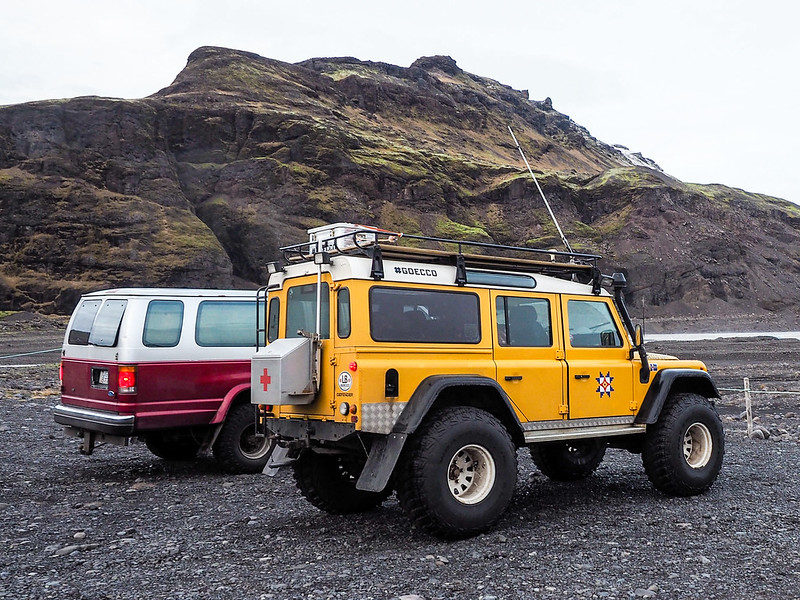 But as soon as we left the city, things began to go wrong. The van got a flat tire an hour outside of Reykjavik, which caused a detour to get it fixed and then to pick up more extra tires – just in case. Then Jonas told us that a hurricane-like storm was about to pound the south coast and that we might not be able to make it to our accommodation that night.

Travel enough in countries like Iceland, and you learn that you sometimes just have to go with the flow – especially when Mother Nature is involved.

Going with the flow in this case ended up working out well. Without having to rush to cross an Icelandic desert before dinnertime, we got to spend some extra time exploring the waterfalls and black sand beaches that make Iceland's south shore so famous.

We saw the “hidden” waterfall Gljúfrabúi, braved some icy steps to walk behind Seljalandsfoss, and stopped at the thundering Skogafoss all before a lunch.

Even though the wind was blowing hard enough to impede walking by that point, we also stopped at Reynisfjara Beach to see its famous basalt columns, and at the plane crash on Sólheimasandur beach before dusk. 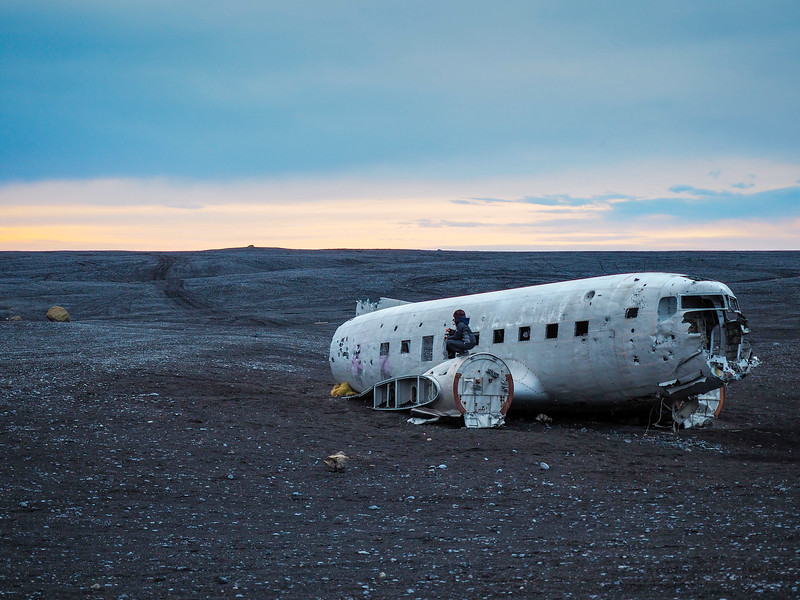 Along with getting in more sightseeing, spending more time on the road meant that we got to know our head guide, Jonas, a lot better, too. There were three of us plus a guide-in-training in the Land Rover with Jonas, and I got the coveted front seat on the first day.

Jonas, a native Icelander who spent a large chunk of his life in Denmark, is a character, to say the least. He is blunt and honest and swears like a sailor. He's not afraid to speak his mind on things like the changing face of tourism in Iceland, or the effects of climate change, which is causing Iceland's glaciers to retreat at an alarming rate.

He's also a realist when it comes to Mother Nature and Iceland. A few years back, he bought a 40-foot boat and keeps it at the ready outside of Reykjavik – you know, just in case the “big one” goes off and he has to flee the island.

It's not actually all that crazy, either – volcanoes like Hekla (nicknamed “Gateway to Hell” in the Middle Ages) and Katla (“The Beast”) are both overdue for violent eruptions. And then there's Laki, which last erupted in 1783. That eruption killed a quarter of Iceland's people, and caused Europe to go “dark” for months – in fact, many Icelanders will tell you that the chain reaction caused by Laki eventually led to the beginning of the French Revolution.

As we rode past Eyjafjallajokull – the volcano that erupted and famously wreaked havoc on air travel back in 2010 – I shuddered involuntarily as the true potential of what lies under the surface in Iceland hit me.

We thankfully didn't run into any volcanic eruptions on our tour – but we did run into plenty of twists thrown at us by Mother Nature. That night, Jonas and his crew deftly arranged lodging and a meal for us on the fly in the middle of nowhere in Iceland's off-season. I was impressed.

Normally on this tour, you stay overnight at an old converted school house where everyone pitches in to cook a homemade meal and get to know each other. But because of the high winds keeping us from the school house, we ended up eating arctic char at an IcelandAir hotel, and sleeping in some cute cabins in the middle of nowhere.

If only Mother Nature had thought to throw in clear skies for a viewing of the Northern Lights!

Day 2 of our “Chasing Ice” tour was where ice finally came into the picture. We started the day off at Jokulsarlon, the glacial lagoon where chunks of Iceland's massive Vatnajökull glacier break off and eventually float out to sea.

The lagoon had SO much ice in it – massive icebergs in varying shades of blue and white.

We had a little over an hour to explore the lagoon and nearby black sand beach while Jonas and crew went to pick up the gear we would need later for glacier hiking and ice caving. 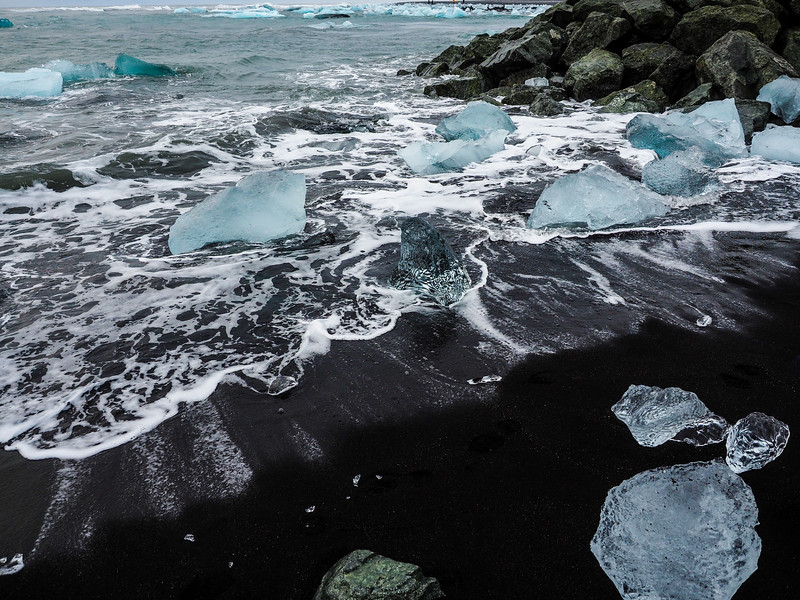 Mother Nature would thwart us at least once more, though. Our first try at an ice cave beneath Iceland's largest ice cap ended in a dead end and a flooded blue-ice cave.

Thankfully, though, our second try was more successful. We strapped on ice grippers, helmets, and head lamps and descended into a pitch-black ice cave. The cave was extra dark because of the black sand/ash that had been blown across the glacier the night before, but I think that made it even cooler.

Jonas then decided to show Mother Nature what his Defender and tricked-out Ford Econoline van could do, and took us on a drive atop the glacier. We stopped for a short hike across the glacier and down into the remains of a collapsed ice cave.

It kind of felt like exploring the moon (you know, if the moon were made of ice). 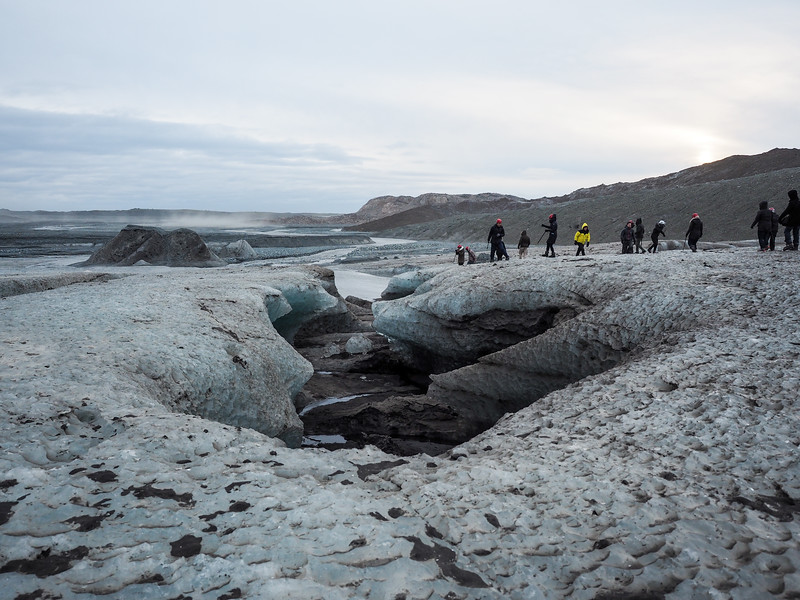 If one thing was hit home for me on this tour with Goecco, it's that you can never truly make plans when Mother Nature is involved. And, in Iceland, she is ALWAYS involved.

Overall, though, I was super impressed by the entire Goecco team AND the rest of the people in our group for doing such a fantastic job of rolling with the punches and making our tour as great as it possibly could be. If you want to go on a slightly wild adventure and get up close with ice in all its forms, this is the tour for you. 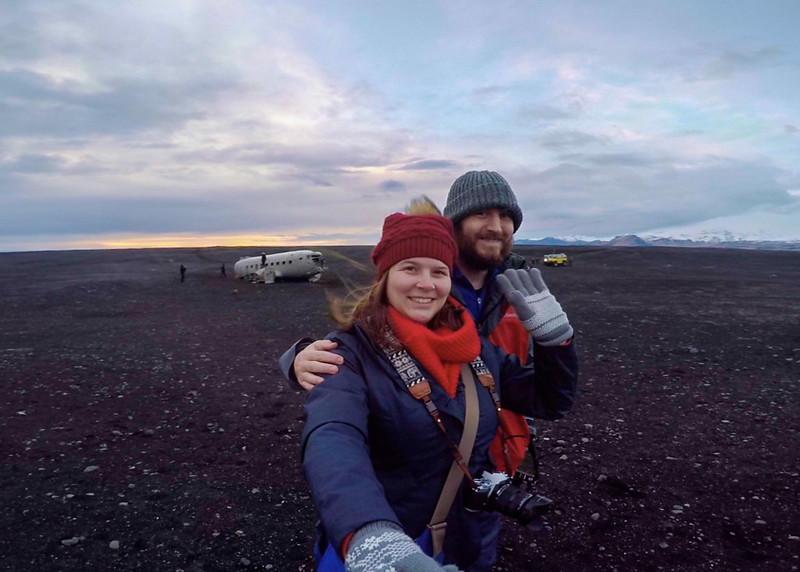 WHAT: Goecco, a great tour company specializing in small-group adventure tours. Check out the 2-day tour that we did, their express tour from Reykjavik, or check out their family tours of Iceland.

WHEN: Ice cave tours generally run from November through April.

WHAT TO PACK: Good hiking shoes and waterproof layers – check out a complete packing list here.

Has Mother Nature ever impacted YOUR travels in an extreme way? 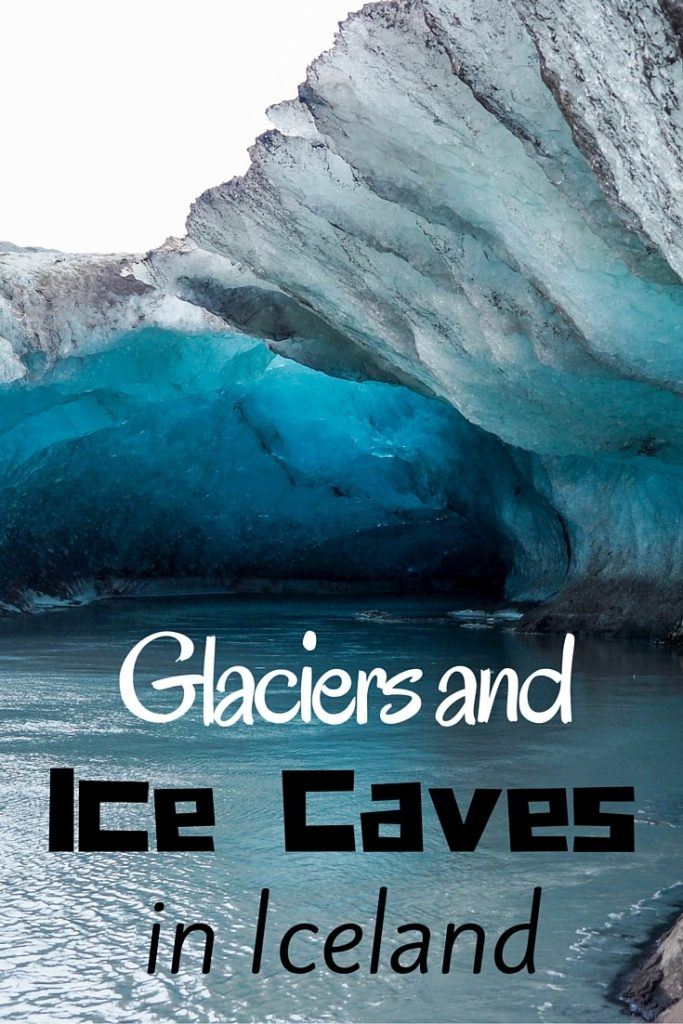 Big thanks to Goecco for hosting us on this tour. But, as always, all opinions are 100% my own!

36 Comments on “Chasing Ice and Battling Mother Nature in Iceland”