The Wild Beauty of the Snaefellsnes Peninsula

Home » Europe » Iceland » The Wild Beauty of the Snaefellsnes Peninsula

They call it “Iceland in Miniature.”

And it really is. With a crashing coastline, natural hot pools, basalt columns, volcanoes, fluffy horses, and glaciers, the Snaefellsnes Peninsula really does encapsulate just about everything Iceland is known for within a 90-kilometer-long peninsula.

The peninsula also embodies some of the non-visual characteristics of Iceland, too: small, cozy hotels; fresh seafood; an adventurous spirit; and the reminder of just how wild and harsh Mother Nature can sometimes be.

We stopped at beaches bearing the ghostly remains of shipwrecks, walked along crashing coastlines, descended into caves formed by molten lava, and listened to our guide talk about the startling retreat of Snaefellsjokull – a giant glacier that sits atop a dormant volcano on the far end of the peninsula. At the rate that the glacier is receding, scientists predict it could completely disappear in the next 30 years. 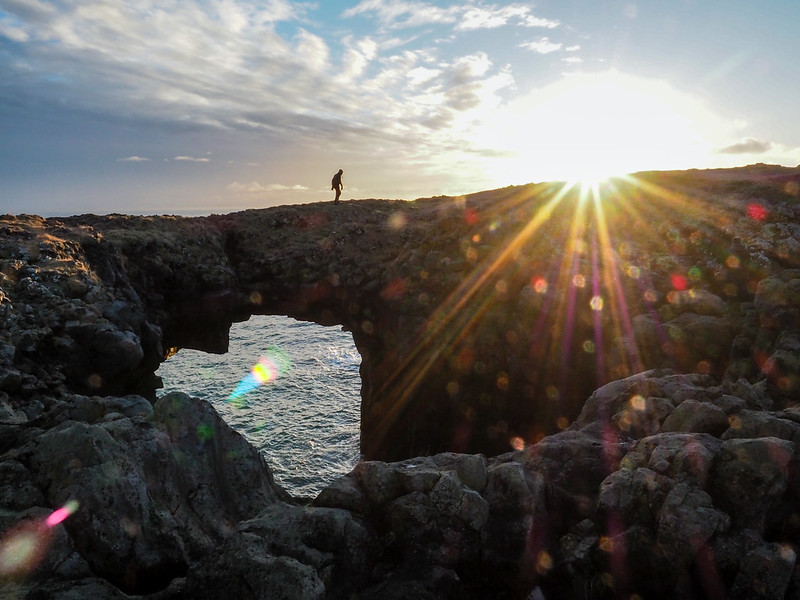 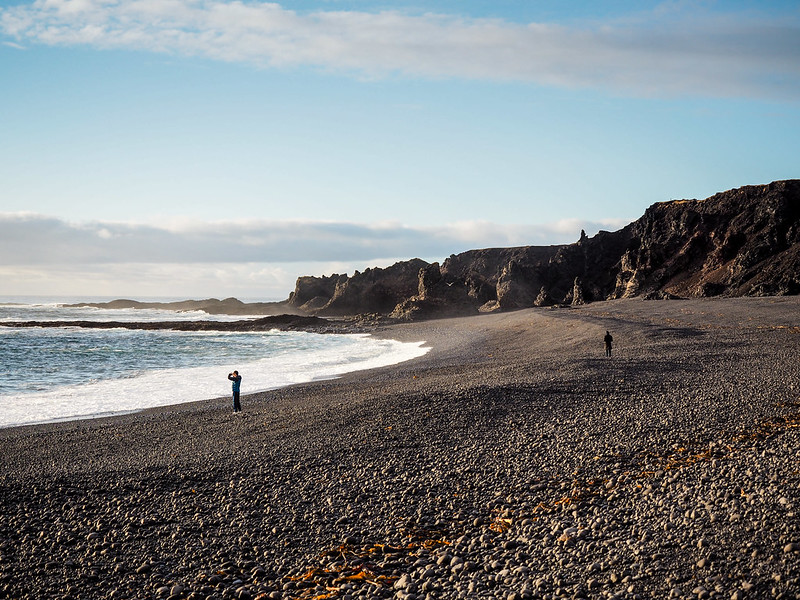 When I first went to Iceland in 2012, I admit that I knew very little about everything there was to see in the country beyond the Blue Lagoon and Golden Circle. I didn't even hear of the Snaefellsnes Peninsula until after I'd already returned home.

So, on my second trip, I vowed to see “Iceland in Miniature” for myself.

I think it's my new favorite part of Iceland. 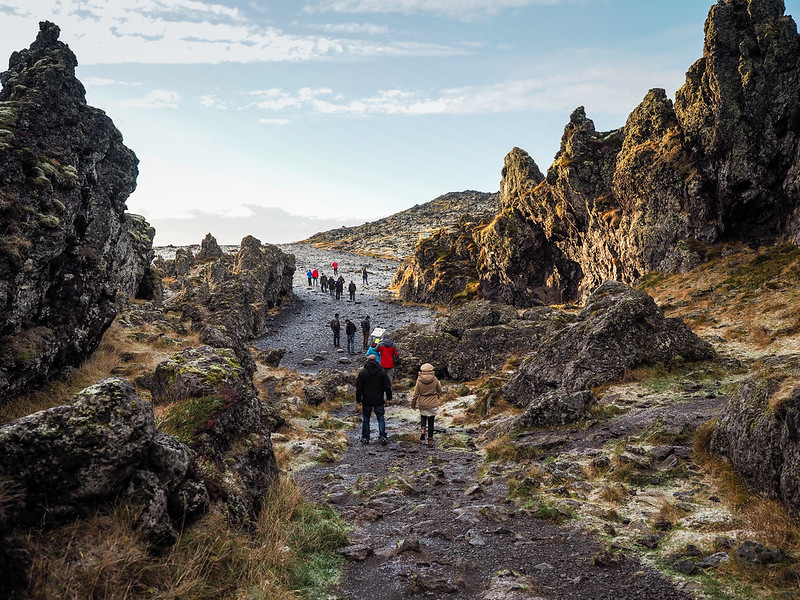 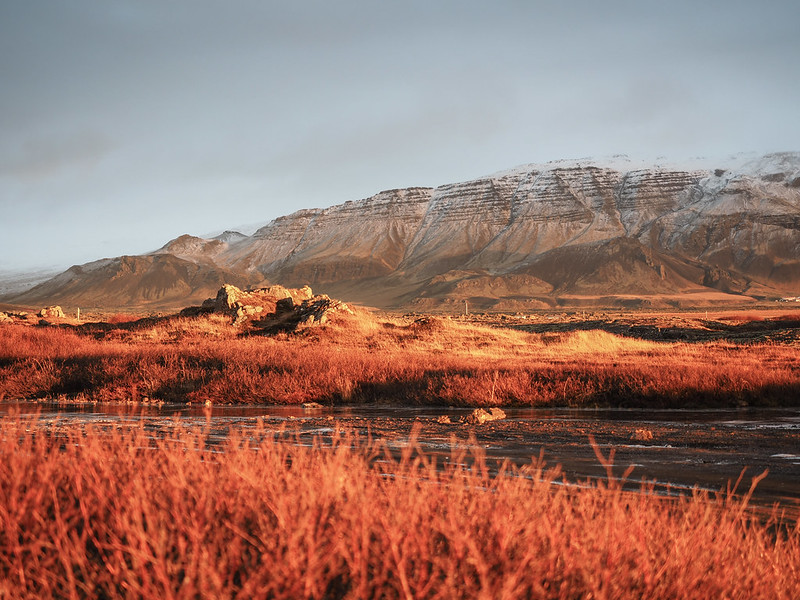 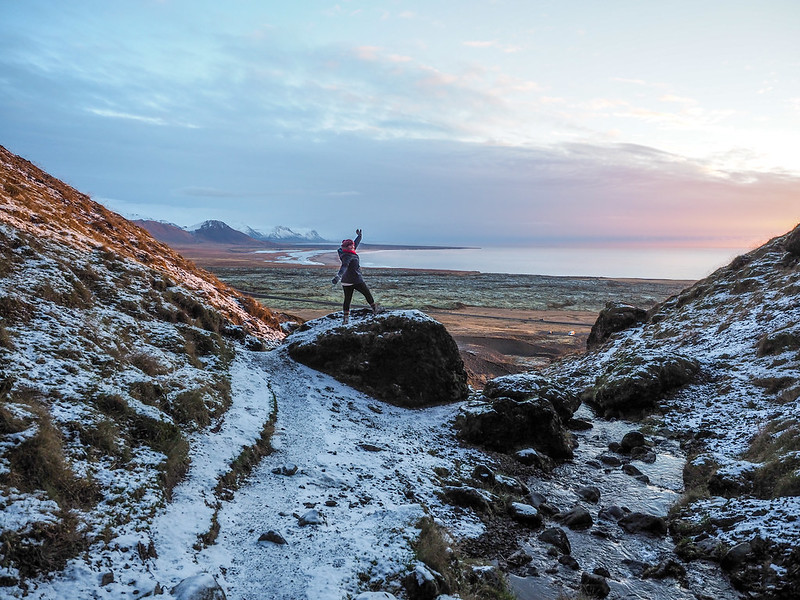 If you're interested in the Snaefellsnes Peninsula for yourself (and, believe me, you should be), here are the must-see spots:

Winter days in Iceland are short. But they are short because the sun never rises very far above the horizon – which means that while the overall days are short, the sunrises and sunsets are long.

One of our first stops on the peninsula was during one of these long sunsets at the Gerðuberg basalt columns. The sun popped out from below a cloud bank and then hung there, tossing out shades of orange and pink, for roughly three times the length of an average sunset. It turned the wall of basalt columns orange as we hiked up into them. 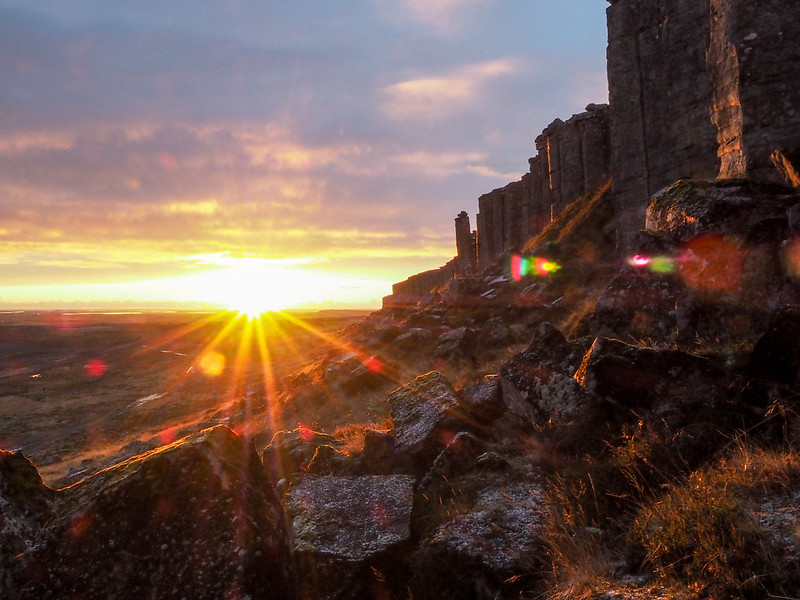 These columns were formed by cooling lava, and you can find similar formations like this all over Iceland. 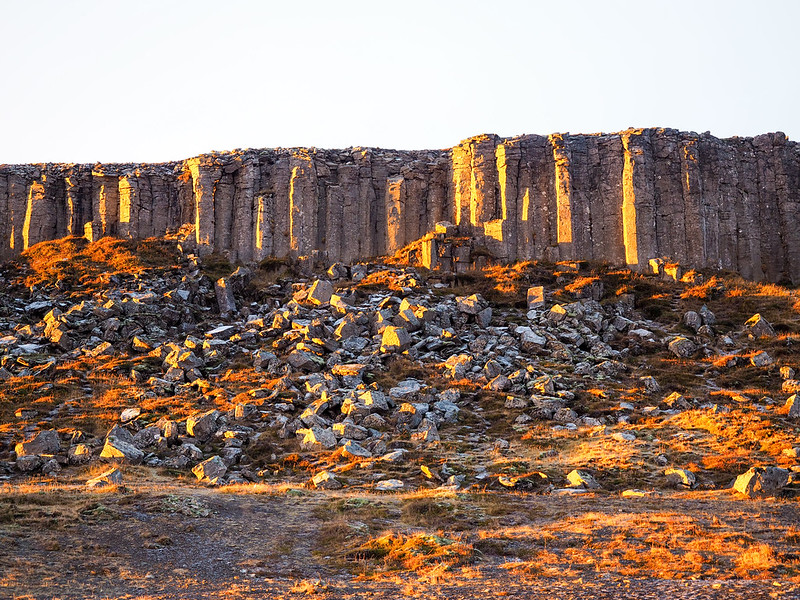 Sunrise the next morning was equally long and colorful, painting the landscape pink as we made a stop at “the Crack,” or Rauðfeldsgjá Gorge. You can climb into the crack, where a small stream runs out from further up in the rocks. 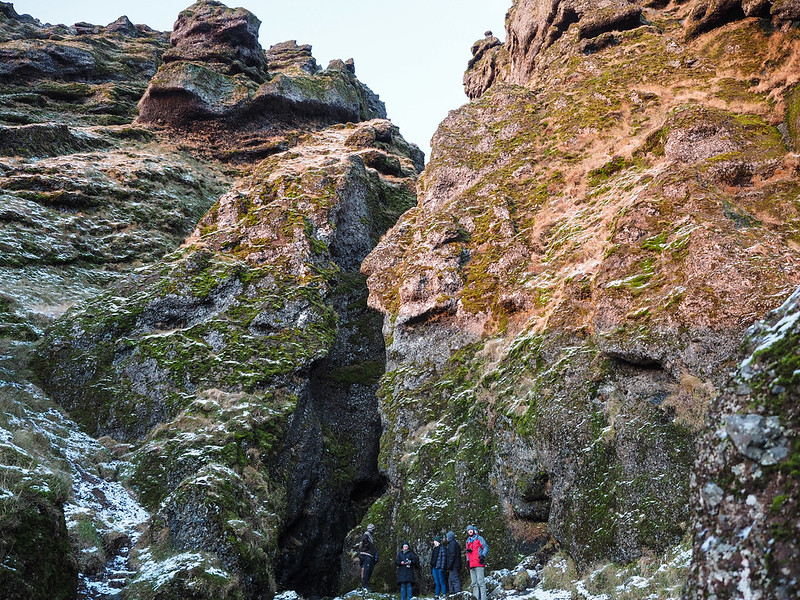 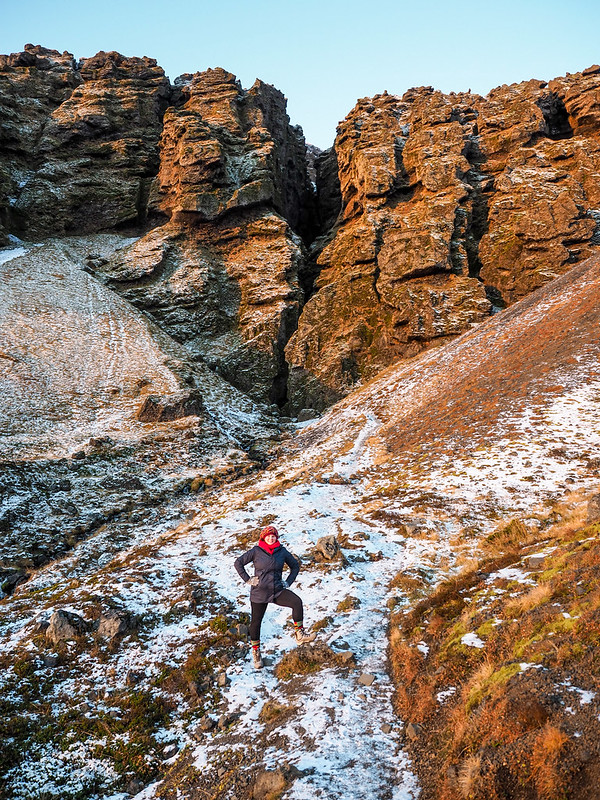 With a dusting of fresh snow, it really was quintessentially Iceland. 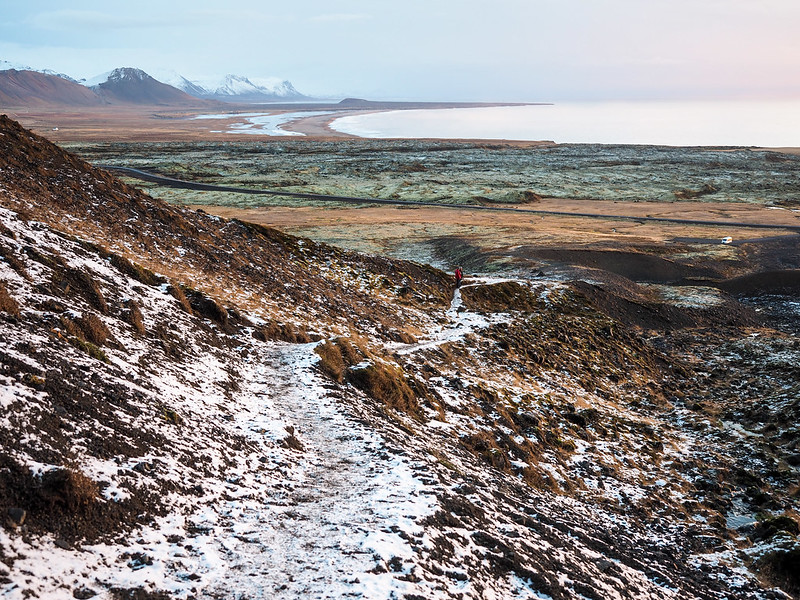 The Snaefellsnes Peninsula has no large towns. Instead, there are a bunch of little fishing villages dotted along the coast. We stopped at Arnarstapi, a popular summer escape for many locals and tourists and traditionally a decent-sized port in Iceland. 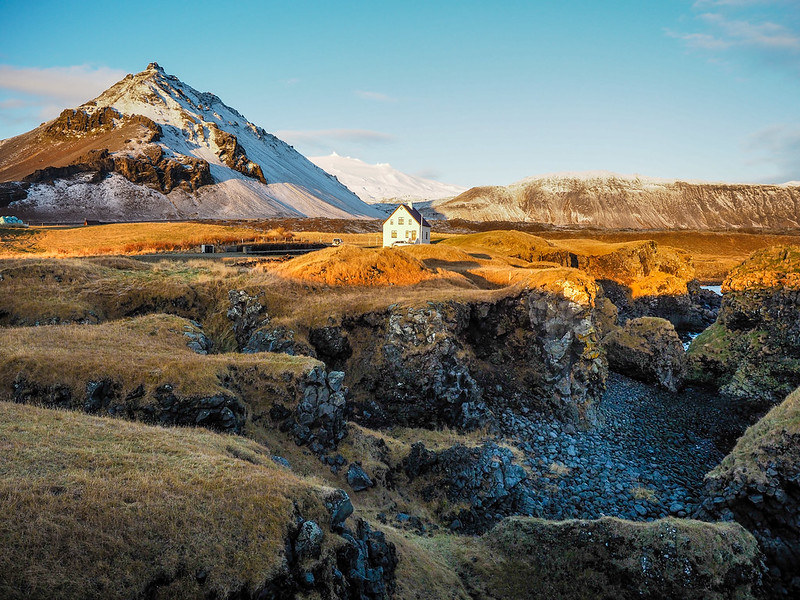 In the winter, the village is nearly deserted – but that was just fine as far as we were concerned. The landscape here is just stunning. 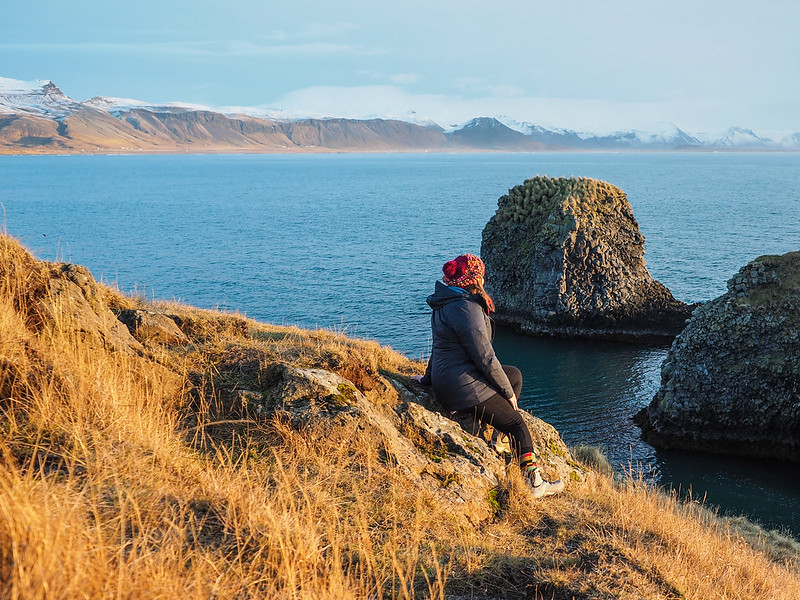 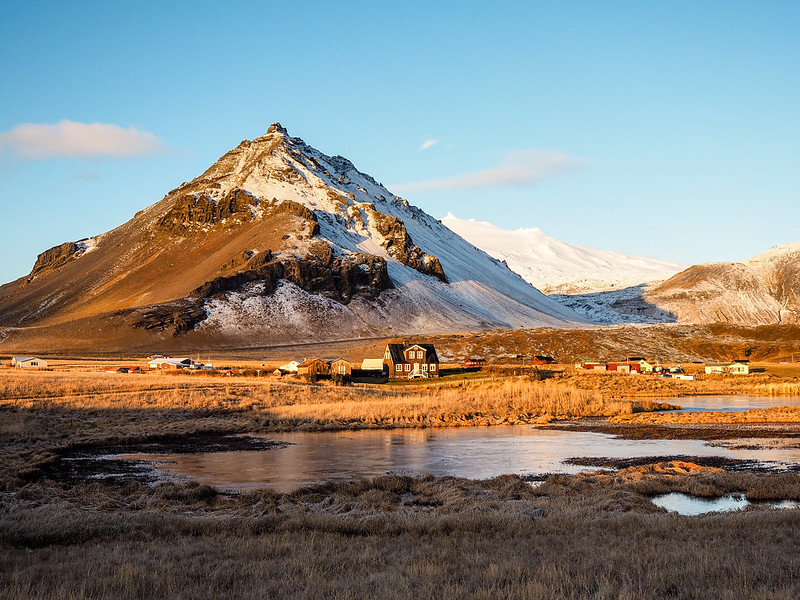 From Arnarstapi, we hiked along an old horse trail that leads 2.5 kilometers along the coast and through the Hellnahraun lava field to another small village called Hellnar. 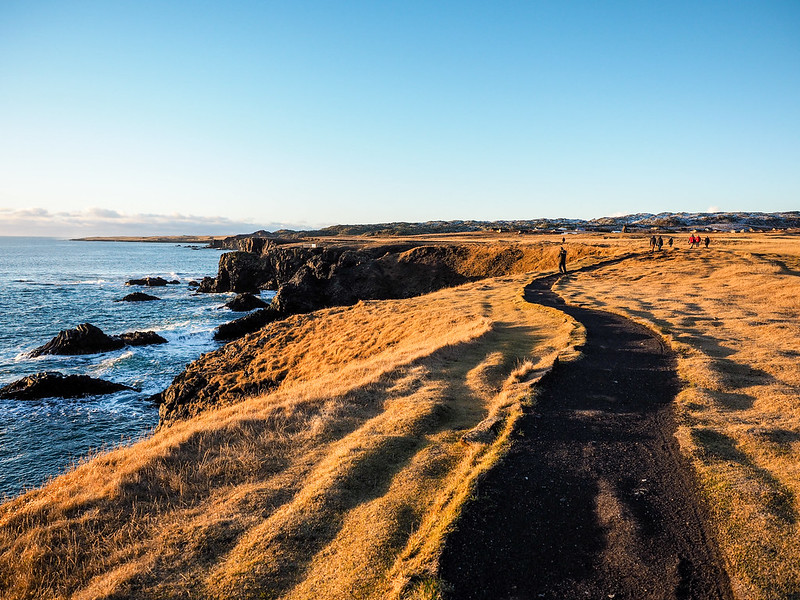 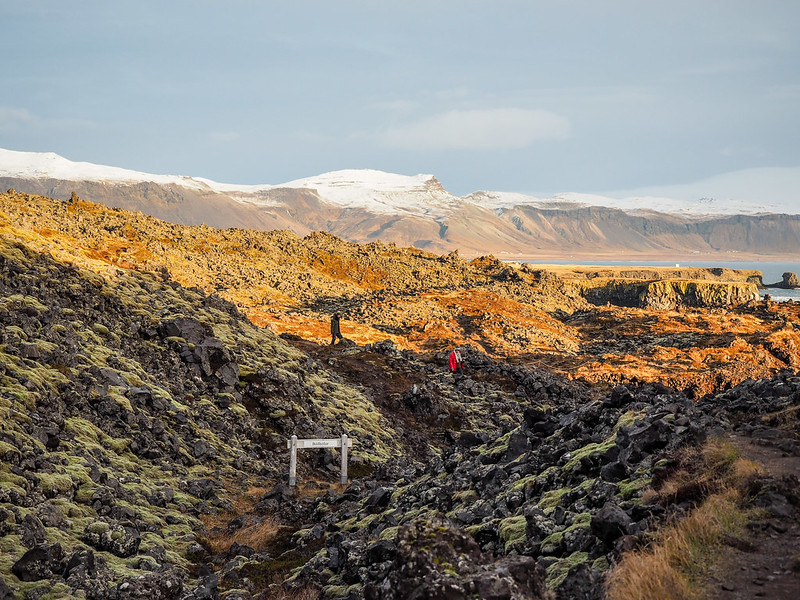 Filled with epic views of the coast and a few scrambles over lava rocks, this may have been the highlight of this trip to Iceland for me. (The great weather didn’t hurt, either, of course.)

The hike takes about an hour, during which I put my new camera to work, snapping photos of everything from sea caves and arches to tumbles of lava rock. 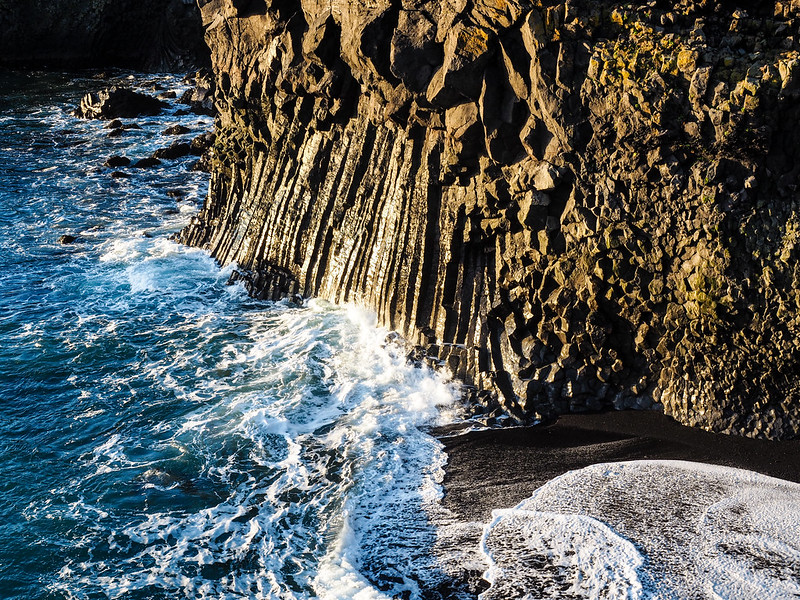 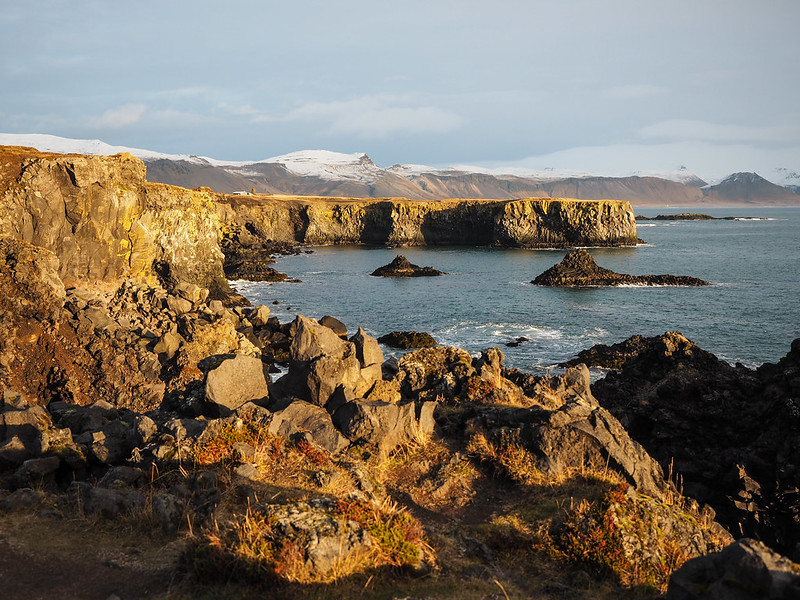 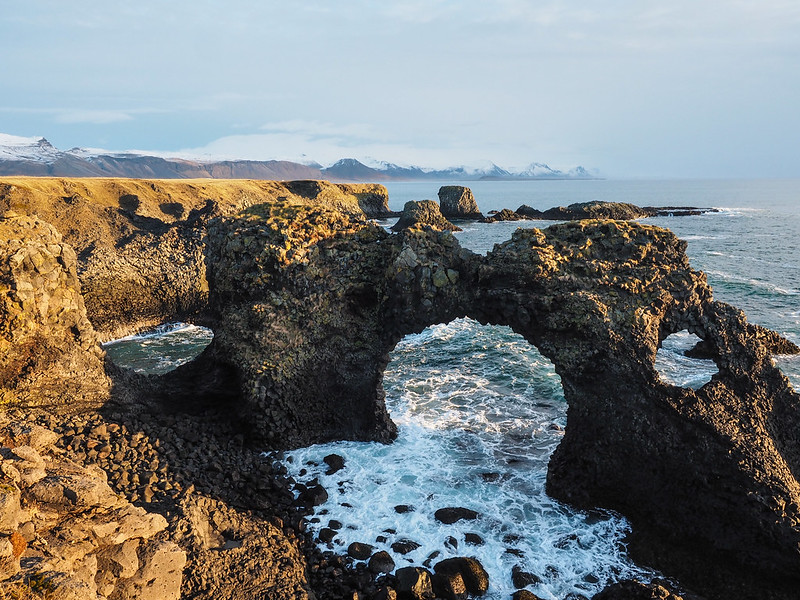 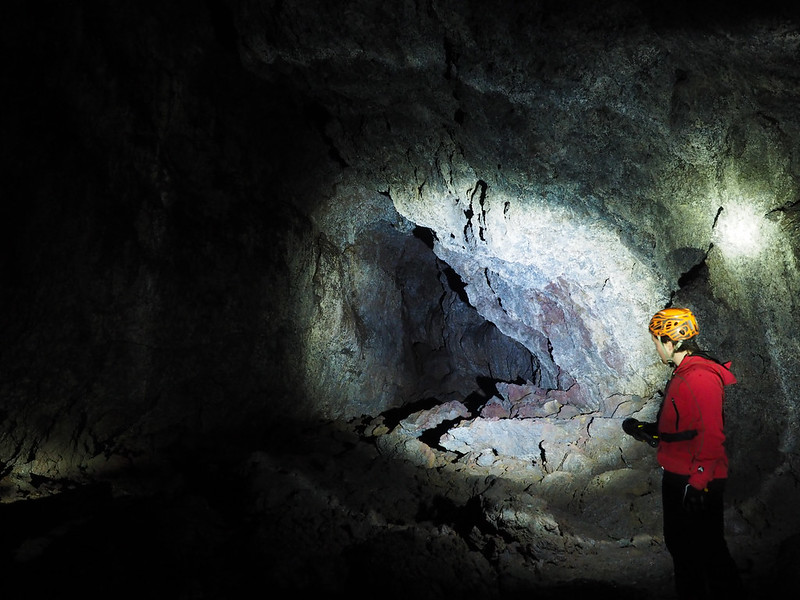 Vatnshellir lava cave, therefore, is popular for a couple of reasons. First of all, it's a cave beneath a glacier that was carved out by molten lava. Secondly, it has a lot of legends surrounding it, including being the home of trolls. And, thirdly, the locals say that this is where you'll find the passage to the center of the earth – in fact, there's even a cheeky sign inside pointing the way! 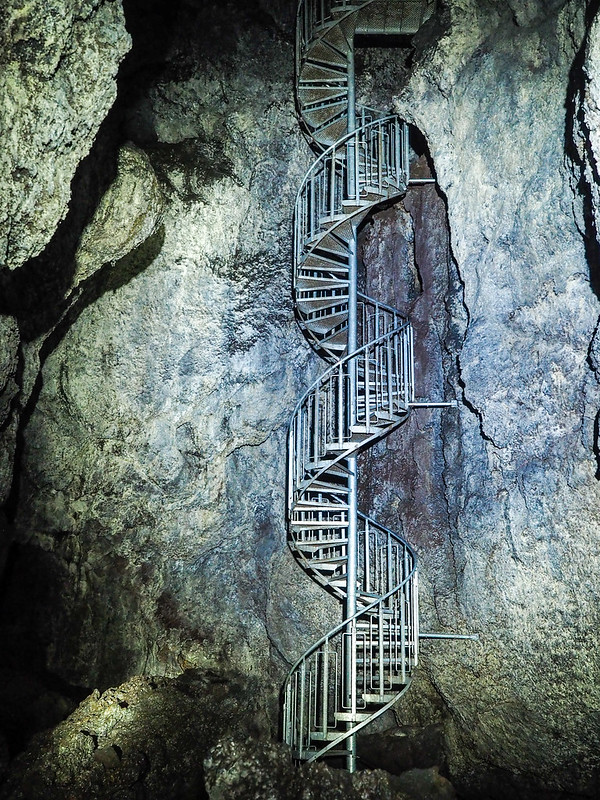 If you want proof of the awesome power of Mother Nature in Iceland, look no further than Djúpalónssandur beach. This black sand/pebble beach at the end of the Snaefellsnes Peninsula is known for wicked waves and currents that have claimed more than one ship throughout history. 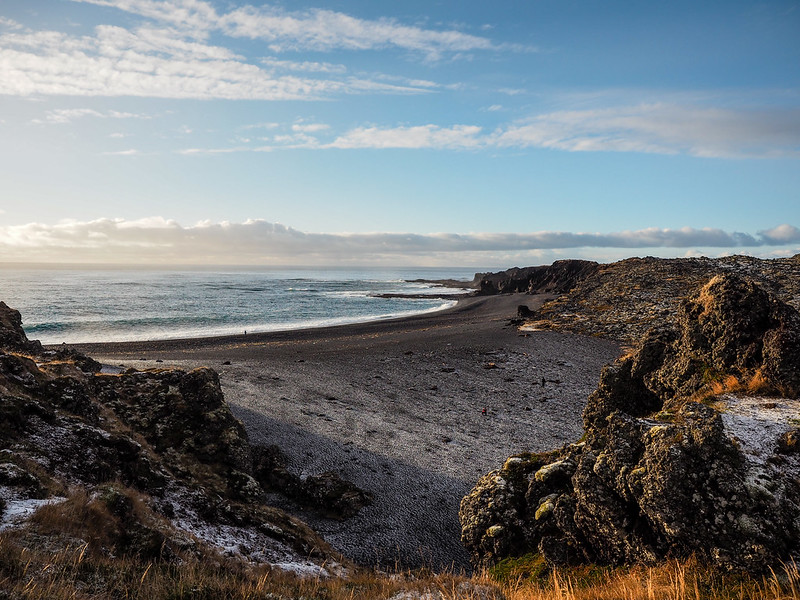 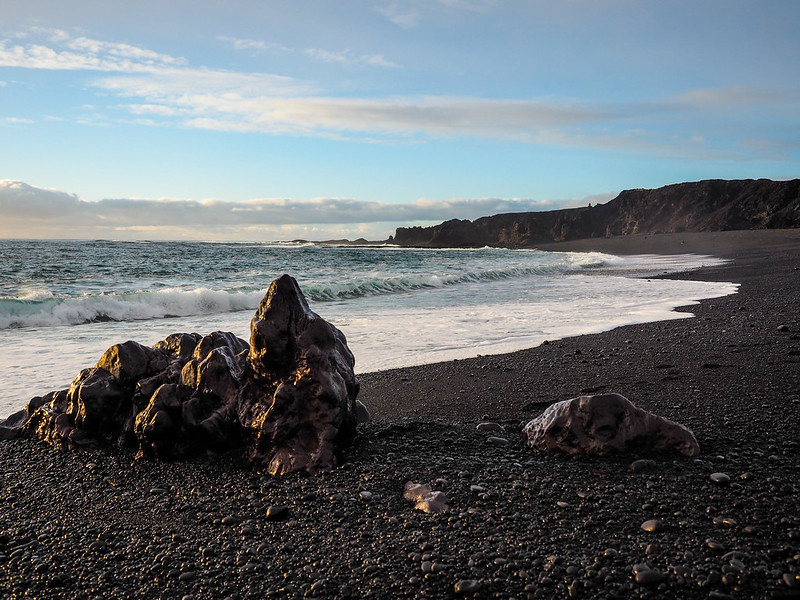 The evidence of shipwrecks can still be seen scattered across the wide swath of black sand, and the waves breaking on shore are definitely powerful enough to make you think twice about getting too close. 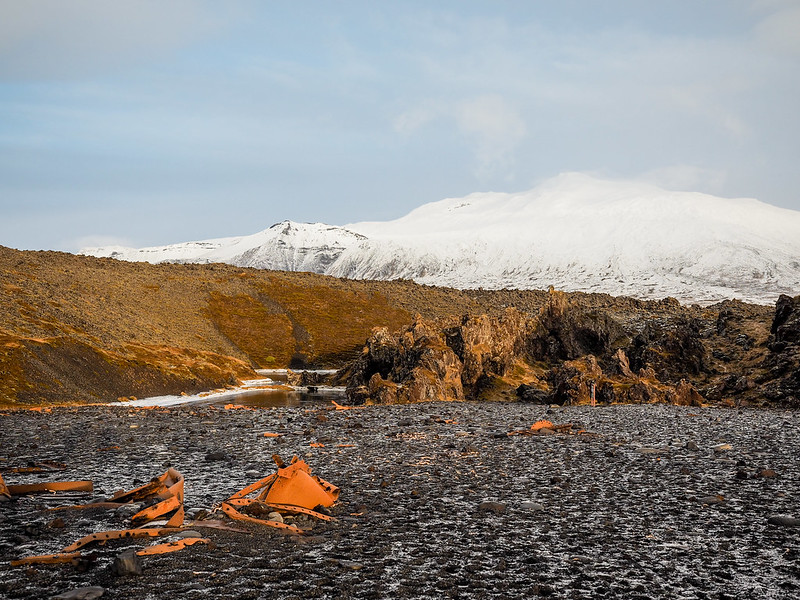 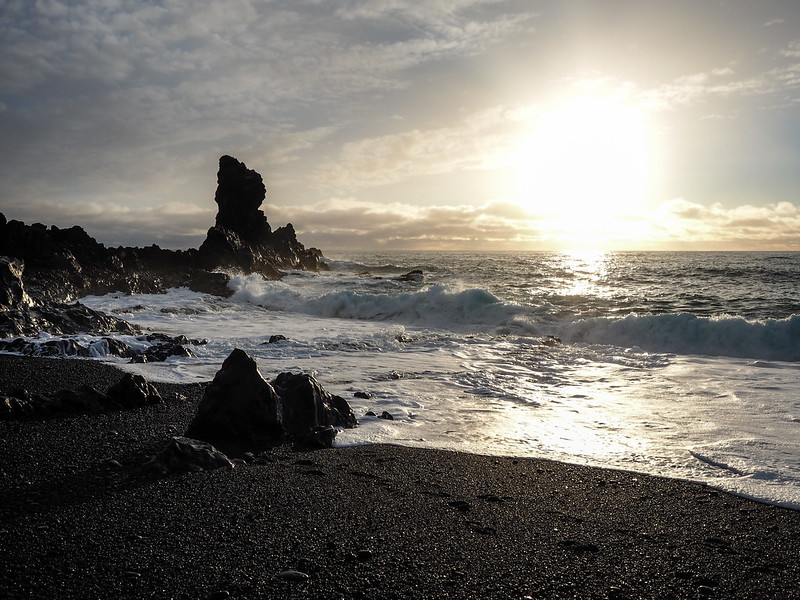 Heading along the northern coast of the Snaefellsnes Peninsula, the top attraction by far is Kirkjufell, or the Church Mountain. This is the mountain you'll see on all the postcards – kind of cone-shaped and usually with waterfalls in front and/or Northern Lights dancing overhead.

Unfortunately for us, the good weather we had on the south side of the peninsula didn't follow us north, and the mountain was shrouded in sleet and clouds by the time we got there. 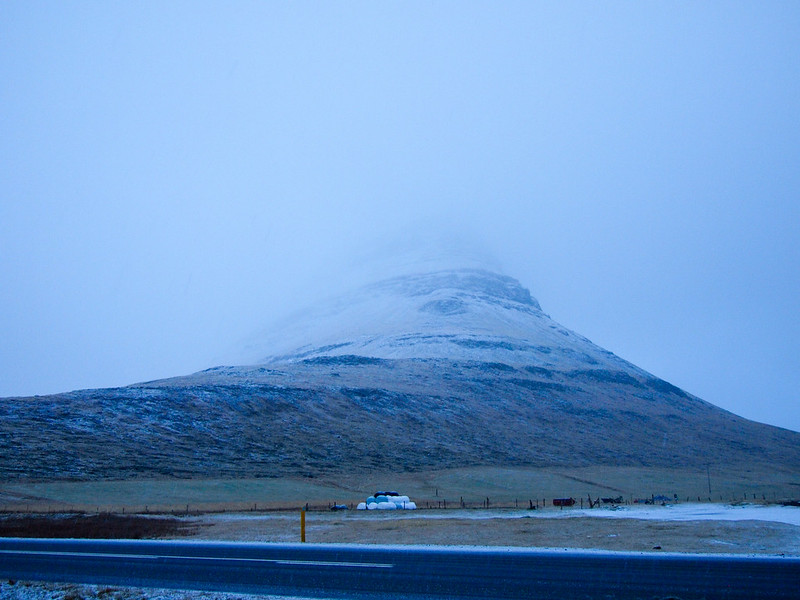 I'll admit that I was a bit bummed by this, but after everything else we’d seen and done on the peninsula, my disappointment didn't last long. Guess I'll just have to go back to Iceland again!

How to do it

The Snaefellsnes Peninsula is within easy driving distance from Reykjavik, and the roads are well-maintained in good weather (if a bit narrow). Therefore you could definitely rent a car and see the peninsula on your own time, perhaps keeping an eye out for good weather – it can be completely different depending on which side of the peninsula you're on.

If you don't feel comfortable driving yourself (or if you're going in the winter when the roads might be a bit iffy), there are plenty of tour options, too. Elliot and I ended up booking a two-day tour from Reykjavik with Extreme Iceland. Their “Snaefellsnes Peninsula and Auroras” tour is a winter-specific tour to take in the best of the peninsula and possibly spot the Northern Lights if conditions are right (it would be easy to see them from your hotel window at night). 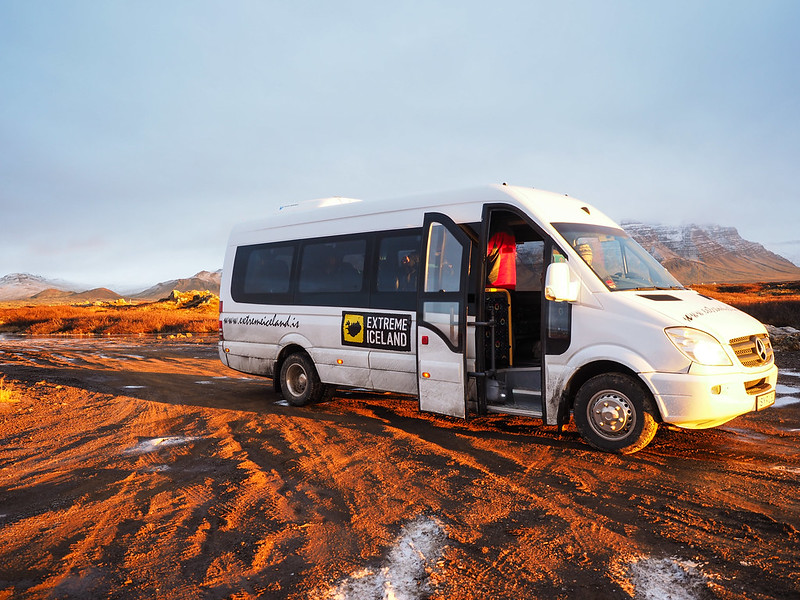 We didn't get lucky enough to see the Northern Lights, but we DID really enjoy the small-group tour. They even come pick you up from your hotel in Reykjavik.

Have you ever been to the Snaefellsnes Peninsula? If not, is is somewhere you'd like to visit? 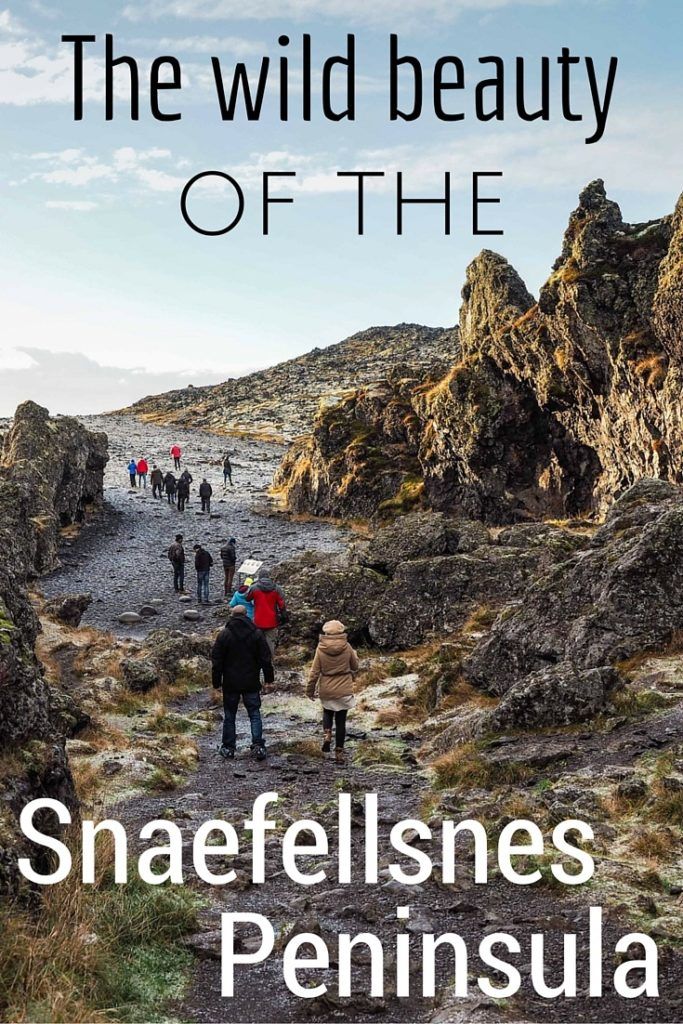 *Note: Extreme Iceland gave us a discount on this tour. But, as always, all opinions are my own!

51 Comments on “The Wild Beauty of the Snaefellsnes Peninsula”