Titanic Ties and Postcard Houses: Your Guide to Cobh, Ireland

When it comes to places to visit in Ireland, you've likely heard of cities like Dublin and Galway and Cork. You've heard of the Cliffs of Moher and the Ring of Kerry, and maybe have even considered visiting the Aran Islands.

But today I want to introduce you to a smaller, less-famous town in Ireland that should absolutely feature on your Ireland bucket list: the town of Cobh.

Cobh (pronounced “Cove”) sits on the southern side of Great Island, an island within Cork Harbour on Ireland's south coast. Cobh is located just 30 minutes from Cork, but feels like a completely different place – and indeed is worth a detour of its own.

The history of Cobh, Ireland

Cobh currently has a population of less than 15,000, but has been inhabited since 1000 BC. It was officially known as “The Cove of Cork” by 1750, but was renamed “Queenstown” by the British in 1849 to commemorate a visit by Queen Victoria.

The town kept the name of Queenstown until about 1920/21 (around the time that Ireland became Ireland), when it switched its name back to Cove – but with the “-bh” spelling, which is a nod to Ireland's Gaelic language. (Interestingly, though, “Cobh” actually doesn't mean anything in Gaelic.)

Because of its location inside a naturally protected harbor, Cobh has long been a center of shipping and an important naval military base. It was also one of the major ports for Irish migration – it's estimated that 2.5 million Irish people immigrated to North America from this port between 1848 and 1950.

Famously, back when it was known as Queenstown, the city was the final port of call for the RMS Titanic before the oceanliner sank in the Atlantic (more on this later).

Today, Cobh is still an important port, especially for cruise ships. It's home to Ireland's largest cruise terminal. (But, before you let that turn you off from visiting Cobh, know that Irish ports don't see millions of cruise tourists per year, and most of them go on excursions to other parts of Ireland while they're in port.)

Top 7 things to do in Cobh

I added a stop in Cobh to the 10-day Ireland road trip I did with my mom and sister. I'd seen so many pretty photos of this little port town, and wanted to see it for myself.

And, while you can absolutely visit Cobh on a day trip from Cork or other parts of Ireland, I highly recommend staying for at least a night in order to truly explore and appreciate it.

Here are the top things you should do in Cobh:

Probably the most popular thing to do in Cobh is to visit the Titanic Experience, a museum located in the original White Star Line Ticket Office. It was from here that the last 123 passengers to board the Titanic embarked on April 11, 1912.

The Titanic Experience includes a guided tour, where you'll learn what it was like for those 123 passengers to board the Titanic. You'll also get a glimpse into what life would have been like onboard the Titanic for both first and third class passengers, and be able to see what's left of “Heartbreak Pier,” which was where all passengers leaving the port of Queenstown departed from.

The most unique thing about this tour is that when you arrive, you're given a mock ticket with the name of one of the 123 Titanic passengers who boarded the ship in Queenstown. After the tour, there's a museum exhibit all about the Titanic to explore, and there you can learn the fate of your passenger, namely whether he/she survived the sinking of the Titanic.

Tickets are 10 Euro per adult, and are timed. It's recommended that you book tickets in advance to make sure you can visit at your desired time. Book your ticket here.

If you want to learn even more about Cobh's history and its ties to the Titanic, then you'll want to also book an hour-long Titanic Trail walking tour.

Yes, you'll learn more about the Titanic and its passengers on this tour, but you'll also learn other things about Cobh.

For example, Cobh has ties to another famous sunken ship, too. In 1915, when a German U-boat sank the passenger liner RMS Lusitania, it sank not far off the coast of southern Ireland. All the passengers (both survivors and many of the dead) were brought to Queenstown, and many were even buried in a local cemetery. You'll visit the Lusitania Peace Memorial in Casement Square on the Titanic Trail tour.

Even if you're not a big Titanic nerd, this walking tour is one worth taking.

You can book a Titanic Trail walking tour here.

One spot you'll visit on the Titanic Trail tour is St. Colman's Cathedral, the Roman Catholic cathedral that can be seen from just about every point in Cobh.

It's worth popping in to see this beautiful cathedral.

4. Check out the Cobh Heritage Centre

If you want to learn even MORE history about Cobh and the Irish people who emigrated from here over the centuries, then you'll want to check out the Queenstown Story at the Cobh Heritage Centre.

Spanning from the 1600s through the 1900s, the Queenstown Story covers centuries of Irish emigration. It's a must-do if you have any Irish ancestry yourself.

A bonus is that the Heritage Centre is located in Cobh's beautifully restored Victorian railway station.

5. See the Deck of Cards houses

If you've seen photos of Cobh before, chances are you've seen the colorful houses along the steep West View road. These houses have earned the nickname “the Deck of Cards,” and do make for a great photo.

There's a small park along West View (near where it intersects with Spy Hill) that gives you a good view of these colorful houses. But if you want to take a photo like the one you see above (with most of St. Colman's in the background), then you'll have to go up to Spy Hill and reach your camera over the stone wall there above the West View park. That's how I got this shot. (But please don't climb on or over this stone wall!)

Otherwise, you can also take nice photos from the park, and from West View road. Just keep in mind that these are private residences! So be respectful.

6. Walk along the waterfront

Cobh is an extremely walkable little town, and one place you'll definitely want to go for a stroll is along the waterfront and tiny fishing boat harbor. From here, you get great views of the colorful buildings and St. Colman's.

Most of the current buildings in Cobh were built in the mid-1800s, back when the town was being developed as a Brisith naval port (and went by the name Ballyvoloon).

This is one thing I wasn't able to personally do in Cobh because of time constraints, but if you're spending a couple days in the area, then I would also recommend taking a tour out to Spike Island, which is essentially the Irish version of Alcatraz.

Spike Island was originally home to a monastic settlement, but was eventually dominated by military installations. The star-shaped fort on the island (which is now known as Fort Mitchel) was once home to one of the largest prisons and convict depot centers in Europe.

Much in the same way you can take tours to Alcatraz from San Francisco, you can take a tour to Spike Island from Cobh today. There are guided daytime tours, and even an after dark tour if you're into the darker side of history.

Where to stay in Cobh

I highly recommend spending at least one night in Cobh. There aren't a ton of hotel options in the little town, but there are enough.

We stayed at the Bella Vista Hotel & Self Catering Suites, which is located up on Spy Hill. It has free parking (one of the requirements I set for anywhere we stayed on our Irish road trip), and is within walking distance to the center of Cobh.

It's also the top-rated hotel in town, but is quite affordable, considering that some rooms have views of the Cathedral and harbor.

Other places to stay in Cobh include:

How long to spend in Cobh

Like I said above, I really recommend spending at least one night in Cobh. Not only is this great for local tourism, but it also means that if you happen to be in town the same day as a big cruise ship, you'll still have Cobh to yourself after all the passengers get back on board.

You can see all the highlights in Cobh in one day, but with two days you could take your time and soak up the cute coastal vibe a bit more.

How to get to Cobh

Since we were road tripping, we obviously drove. But you can also reach Cobh by train or bus from Cork. There's an hourly Irish Rail train from Cork to Cobh that takes 24 minutes and costs €6-8.

Cobh is also connected by rail and bus to much of the rest of Ireland. You could technically visit on a day trip from other cities, though I personally wouldn't recommend it; Cobh is worth more than just a couple hours!

Are you ready to add Cobh to your Ireland bucket list? 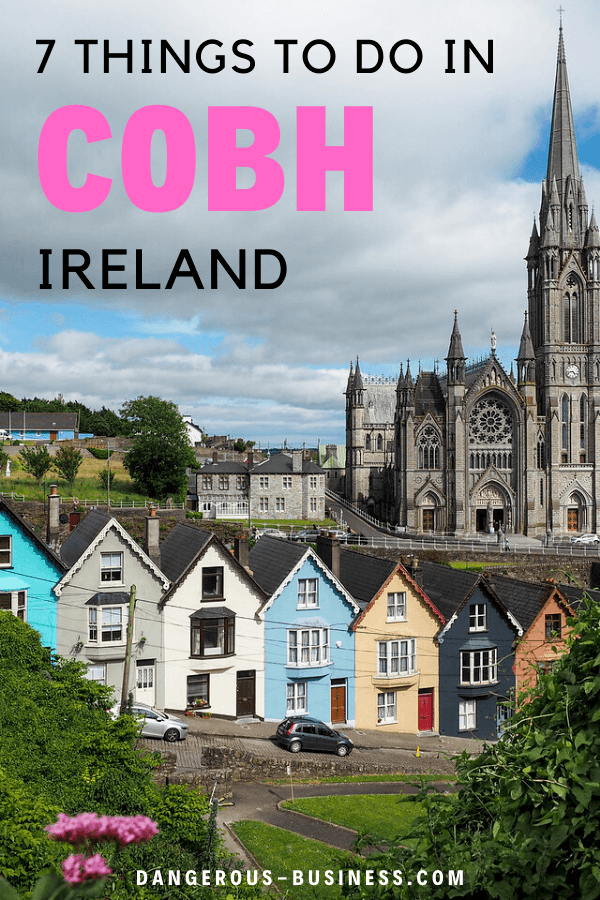 2 Comments on “Titanic Ties and Postcard Houses: Your Guide to Cobh, Ireland”