An Enchanting Stay at Ballyseede Castle in Ireland

As we slowly rounded a bend in the driveway, all three of us in the car let out a collective “Oooo” as Ballyseede Castle came into view.

“I'll bet it's haunted,” my sister said as we claimed a spot in the parking lot and began unloading our things.

“It's not haunted,” my mom said, taking in the green-clad castle grounds and miniature horses grazing in a field nearby.

“It's a real castle that's hundreds of years old,” I pointed out. “It's most definitely haunted.” 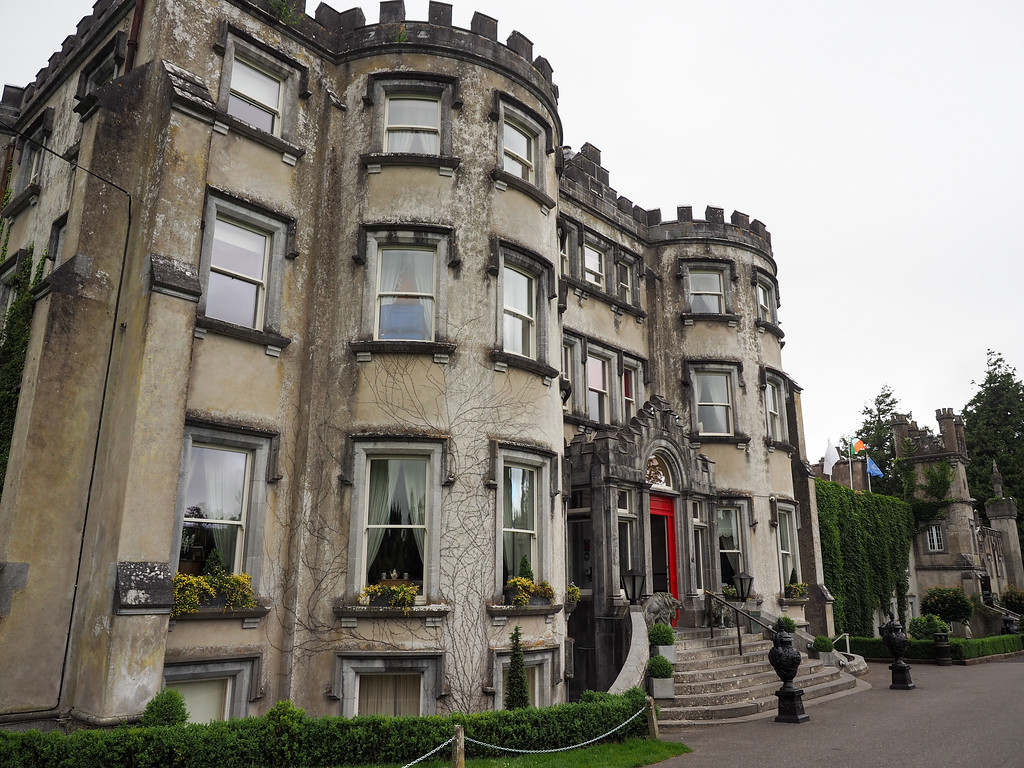 Like many of Ireland's castle-hotels, Ballyseede Castle began as a real castle in Ireland. Located near the town of Tralee and not far from the coast, the 15th century castle originally belonged to the Fitzgeralds, who held the title of Earls of Desmond for hundreds of years. The Fitzgeralds were known for being a bit rebellious, with the final Earl of Desmond refusing to play nice with the Crown after Henry VIII shook things up with the Reformation.

There was open rebellion by the Fitzgeralds against the Crown, often called either the Desmond Rebellions or Geraldine Rebellions. These rebellions – and the Earls of Desmond – came to an end when the 16th Earl was defeated by forces loyal to Queen Elizabeth I. In 1584, Ballyseede Castle and 3,000 acres of land were stripped from the Fitzgeralds and taken over by the Crown, and the final Earl of Desmond was relieved of his head.

Following this, the castle and lands associated with Ballyseede were granted to Robert Blennerhassett. The terms of his lease? He was to pay a rent of a single red rose from the castle gardens every year on Midsummer's Day (think I could work out terms like that for my mortgage?).

The Blennerhassett family and their descendants occupied Ballyseede Castle until 1966, improving and expanding upon the ancient castle over the centuries to make it what it is today.

Today, Ballyseede Castle is a 4-star luxury castle hotel – the only one of its kind in County Kerry in Ireland, and certainly one of the cooler hotels in Tralee.

The castle now consists of 44 en-suite rooms on 30 acres of native Irish woodland. It's a popular wedding venue, and also one of the more affordable castle hotels in Ireland if you're like me and have “stay in a castle” currently jotted down on your bucket list.

I settled on Ballyseede Castle for our Irish castle stay because it was historical, yet not too stuffy; impressive, but not imposing. Plus, they have mini horses and cute donkeys on their front lawn – what more could you possibly ask for?

Once we eventually made our way in to the lobby and got checked in, we then huffed and puffed our way up three stories (no elevators in castles!) to the Crosby Room, one of the large “Family Castle Rooms” perfect for a group of three like ours.

We spent the rest of the afternoon and evening exploring the castle. We snapped photos in the two sitting rooms (Mamie's Lounge and the Kennelly Lounge), took selfies with suits of armor, and wandered into the Orangery, which was clearly being set up for a wedding.

My sister and I also took a stroll through the grounds, which were super green and vibrant, even on an overcast and damp day.

And of course we had to give some love to Mr. Higgins, Ballyseede's resident Irish Wolfhound, and his canine friends (I counted at least 4 castle dogs at this hotel!).

A stay in a castle hotel in Ireland isn't that much different from staying anywhere else. Our castle stay included great Irish service, a comfortable a modern room with things like a TV and free wifi (though the wifi worked better in some rooms than others thanks to the castle's thick walls!), a tasty cooked breakfast, and free run of the castle common rooms and grounds.

I found the castle to be extremely welcoming and comfortable (the beds were some of the best we slept in in Ireland!), and would definitely stay again!

Book your own castle stay at Ballyseede Castle here! 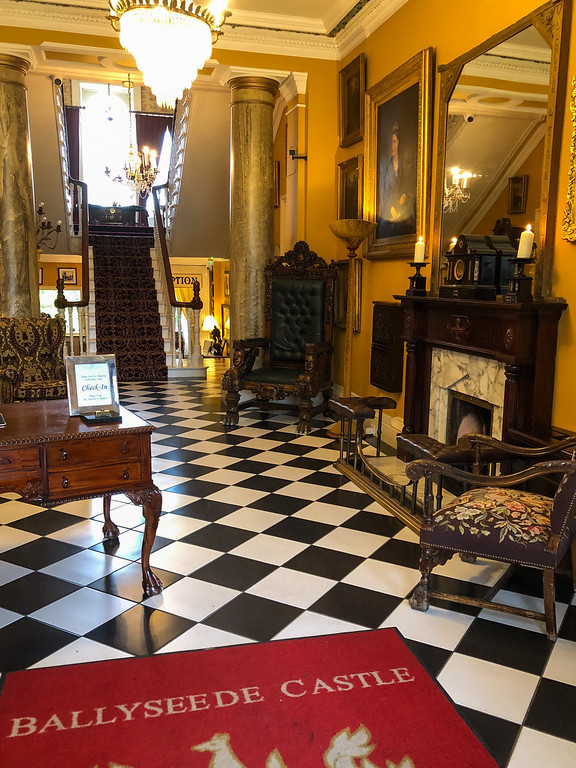 Ballyseede Castle offers a few different dining spaces, and you might be able to enjoy them all even if you only stay for one night.

If you fancy a splurge, be sure to book a table at Ballyseede's O’Connell Restaurant, which sources local and seasonal ingredients to produce some tasty Irish cuisine.

Next door, the Stone Room Restaurant is where you'll have breakfast served in the morning – and it will definitely make you feel like you're eating your pancakes or eggs Benedict (both delicious) in a castle.

In the evening, you can grab a snack or drink at Pappy's Bar, a small and cozy space at the back of the castle.

Or, you can do what we did, and order dinner off the Pappy's menu and eat it in the beautiful Kennelly Lounge!

And the best part about staying at Ballyseede Castle hotel? It's actually affordable! Double rooms at the castle start at €115 during low season (November-March) and €175 during high season (May-September). The family-style castle room we stayed in goes for around €225 during low season and €265 in high season.

You can save even more money by opting to stay at the Castle Lodge instead of in the castle itself (though, to be honest, I would splurge so you can actually stay IN the castle!).

Compare these prices to other famous castle hotels in Ireland, and Ballyseede is a steal!

But now back to that debate we had about whether or not Ballyseede Castle is haunted… It most definitely is!

In fact, Ballyseede Castle has at least one famous resident ghost. Her name is Hilda.

Hilda was the last member of the Blennerhassett to have called Ballyseede home. She was a World War I nurse (and a badass one from everything I've read), and it was after her death in 1965 that the castle was put up for auction and eventually sold to become a hotel. Hilda clearly didn't want to leave, however, because several guests and employees have reported seeing her around the castle.

And the place you're most likely to see Hilda? In the Crosby Room, which used to be her bedroom. (Yeah, I'm kinda glad I found out that bit of information AFTER we slept in that room for a night!)

Along with seeing Hilda's shadow in the window, or physically seeing her in the room, people also often report smelling a strong scent of roses on the upper floor of the castle – perhaps Hilda's final nod to the lease that her family had on Ballyseede for all those generations.

Would you want to stay in a castle in Ireland? How about the Ballyseede Castle hotel? 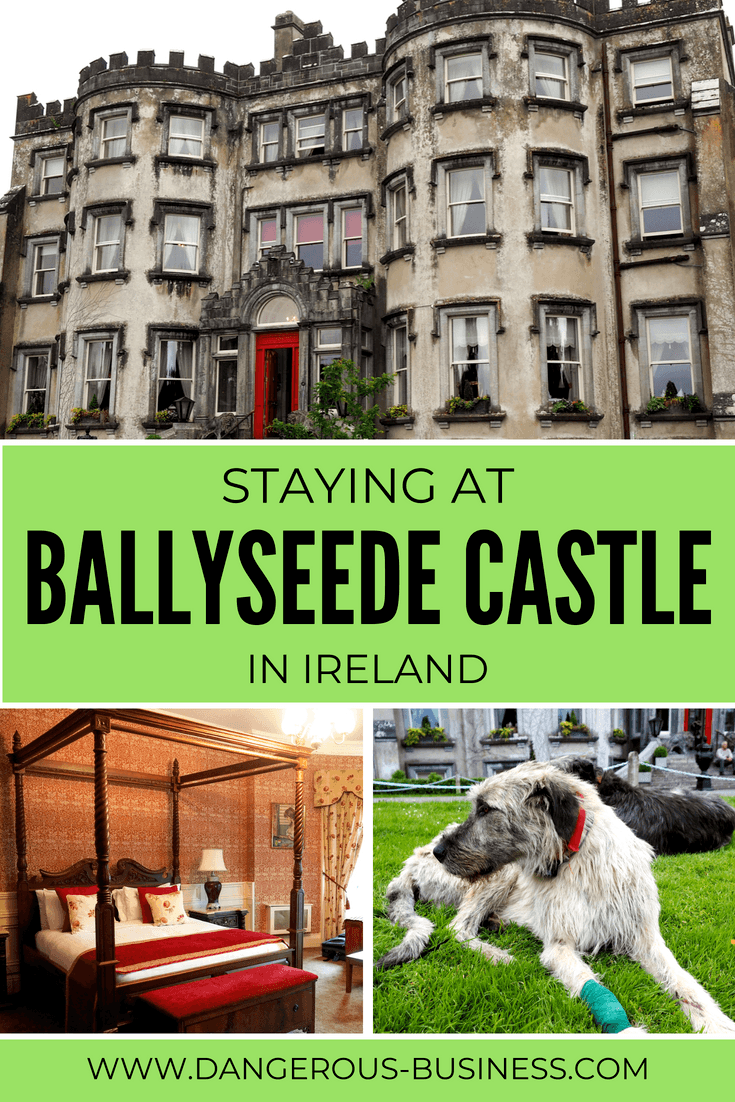 8 Comments on “An Enchanting Stay at Ballyseede Castle in Ireland”