7 Stops Not to Miss in Ireland

Home » Europe » Ireland » 7 Stops Not to Miss in Ireland

The Emerald Isle. The land of luck and leprechauns. The home of Guinness and Gaelic.

Yes, Ireland is all of these things — and more. For such a small country, it actually has a lot to offer any traveler, whether you’re visiting for a few days or a few months.

I’m by no means an expert on travel in Ireland, but there are certain places and experiences that have always stood out from my multiple trips there. So, no matter how much time you have to spend in Ireland, here are 5 stops you should make sure to build in to your travel itinerary.

The capital of the Republic of Ireland, and the country’s largest city, Dublin will likely make it into any Ireland travel plans — and for good reason; there’s a lot to do here.

Take a tour of the Guinness Storehouse, which is perhaps Ireland’s top tourist attraction. For 14 Euros, you can tour this 7-story beer fun house, learning about the history of the Guinness brew, how it’s produced, and how the brand has evolved over the years. At the end, enjoy a pint at the seventh-story Gravity Bar.

For more debauchery and booze, many tourists head to Temple Bar for pubs and nightlife, even though the area is criticized for being overpriced and kitschy. The locals look down upon this area, but it’s still worth seeing, at least, and there’s always live music playing. (Though, if you want a real Irish pub experience, head elsewhere.)

Kilmainham Gaol (jail) is also worth a visit. This former prison-turned-museum was built in 1796, and was used as a prison until 1924. Since the 1980s, the museum has been run by the government. Along with being old (and slightly creepy at times), Kilmainham played an important part in Irish history, as many leaders of the Irish rebellions were imprisoned (and sometimes executed) here by the British. Tours (cost: under 10 Euro) take you throughout the old, crumbling prison blocks, and into the yard in front of the Gaol where hangings used to take place.

Another of my favorite spots in Dublin is the Long Room in the Old Library at Trinity College. The room is a book-lovers dream (and downstairs you can see the famous Book of Kells).

There’s a lot to be said about the Irish countryside. It’s both rugged and rolling, coarse and charming. Frequent Irish rainshowers leave the grass brilliantly green, and the sky is at least twice a day kissed by rainbows. 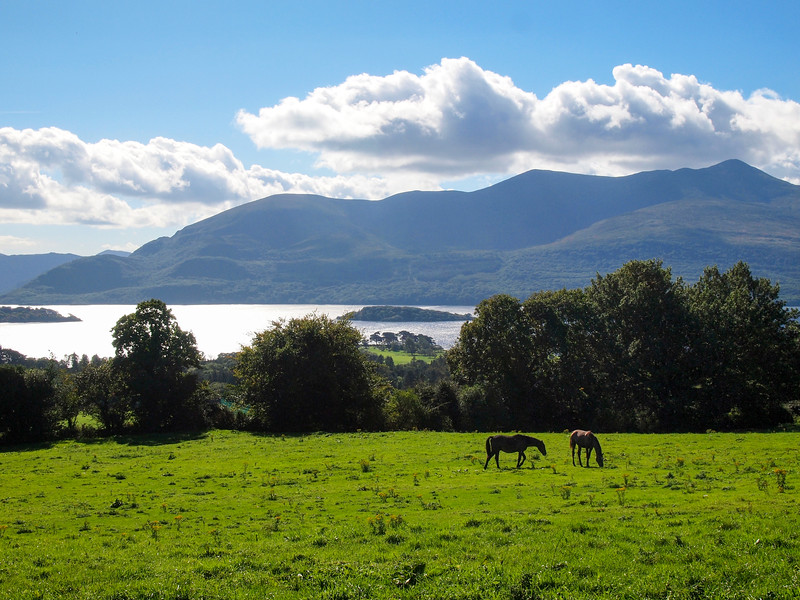 There are a whole host of little Irish towns worth visiting throughout Ireland, most characterized by stone cottages, brightly-colored store fronts, and friendly locals. To call these towns “cute” or “quaint” would be an understatement; the words simply do not do these places justice.

Be sure to visit the old monastic settlement of Glendalough in County Wicklow, which is said to have been founded in the 6th century by St. Kevin. The settlement was partially destroyed in 1398 by the English, but parts still remain in-tact, such as St. Kevin’s Church, the Round Tower, old moss-covered gravestones in the cemetery, and the foundations of chapels and a cathedral.

It would be very easy to fall in love with the city of Galway, I think. This fast-growing city is becoming more and more popular with visitors to Ireland, and it’s easy to see why.

Located on the country’s west coast (nearly opposite Dublin), Galway is often referred to as the cultural capital of Ireland. It’s known for its vibrant streets, numerous festivals, and palpable artistic flair.

Check out the Spanish Arch, the last remnant of the walls that used to surround the city, and don’t miss out on a stroll down Shop Street, Galway’s main thoroughfare. Here you’ll be greeted by old brick buildings, colorful store fronts, plenty of pubs, and an array of street performers.

While out shopping, you may want to pick up a Claddagh Ring, the famous ring design of two hands grasping a crowned heart that originated in Galway and stands to represent love, friendship and loyalty. Thomas Dillon’s Claddagh Gold, located on William Street, claims to be the original maker of the Claddagh Ring, as well as the oldest jeweler in Ireland.

I would also suggest a visit to some of Galway’s churches and cathedrals, which are truly impressive. Galway Cathedral (or the Cathedral of Our Lady Assumed into Heaven and St. Nicholas) boasts a Renaissance-style dome, rose-shaped stained-glass windows, and a wonderfully huge pipe organ. Also consider a visit to St. Nicholas’ Collegiate Church, the largest medieval parish church in Ireland that has been in use since 1320. The old stone church is small, but has a really interesting arched ceiling and smooth, worn stone floors with old engravings on them. 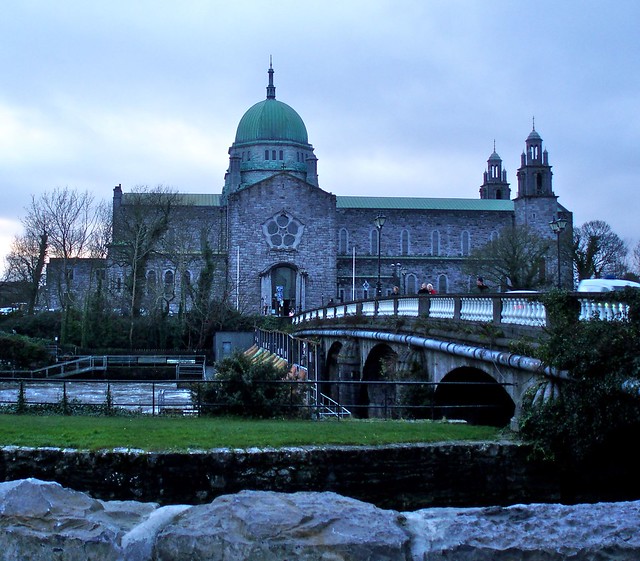 And, before you leave Galway, be sure to catch a ferry over to the Aran Islands. Inishmore (Inis Mor) — the largest of the three islands — is the most popular with visitors, though you can also visit Inishmaan and Inisheer.

Visiting this small island group is a little like stepping back in time. Irish (Gaelic) is still the official language on the islands, which were for a long time largely cut off from mainland Ireland (perhaps mostly by choice). 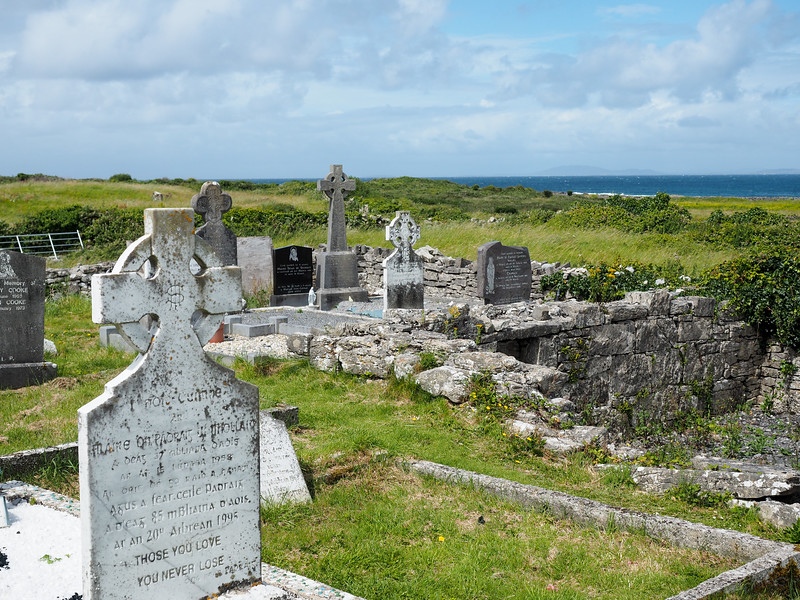 Taking a tour of Inishmore, you’ll learn how early settlers on the island mixed layers of sand and seaweed on top of rocks in order to create fertile soil, and you’ll see evidence of their settlements in the form of thatched cottages and the ancient, low stone walls that are still used today to contain livestock.

Visitors to Inishmore usually hike up the cliffs to the Iron Age fort called Dun Aengus. Not only is the ancient fort interesting, but its location affords a spectacular view of the Atlantic Ocean crashing against 300-foot cliffs.

Before you leave, don’t forget to visit a local shop selling clothing made of Aran wool. While sweaters are the most well-known product made on the Aran Islands, you can also buy hats, gloves and socks. I purchased two knitted hats made of Aran wool, and they are some of my favorite articles of winter clothing.

RELATED: How to Experience the Magic of Inis Mor

Not far from the Aran Islands on the mainland lie the Cliffs of Moher, which draw more than one million visitors per year. (They also stood in for the Cliffs of Insanity in “The Princess Bride,” in case you're a fan like me.) 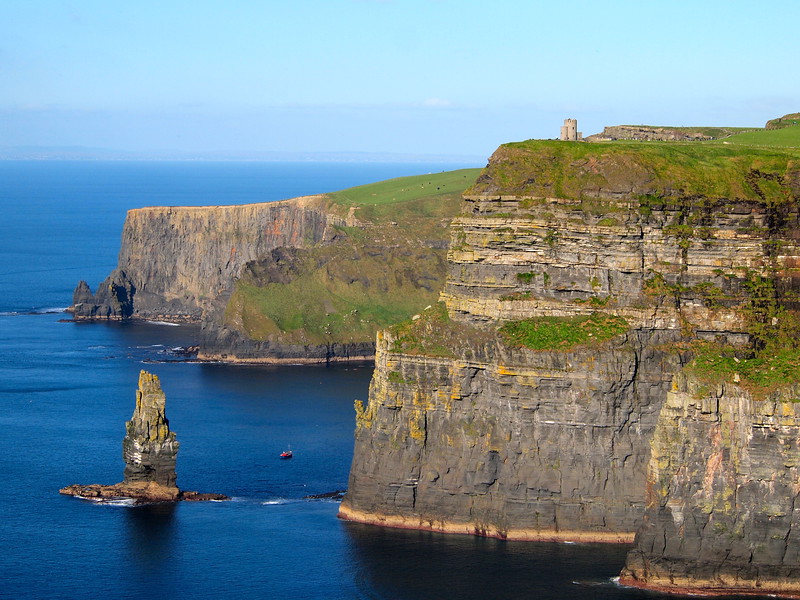 These spectacular cliffs are located on the edge of the Burren region in County Clare, Ireland. They rise from 390 to 702 feet out of the Atlantic Ocean, and are home to tens of thousands of birds — including puffins.

Head out to O'Brien's Tower, the round stone tower that stands on the edge of the Cliffs, or make the hike out Hag's Head (the southernmost point of the Cliffs), which takes about 3 hours round-trip.

Many people drive the Ring of Kerry in Ireland, but I actually advocate driving the Dingle Peninsula in County Kerry instead. It's not far from the Ring of Kerry, but is generally much less crowded. It also includes the town of Dingle, which not only has the most fun name, but also is super cute and colorful.

Check out Inch Beach, which (despite its name) actually has 3 miles of golden sand backed by sand dunes. And in Dingle itself, be sure to grab ice cream at Murphy’s.

Lastly, don't skip the city of Cork, just inland from Ireland's southwest coast. This university city on the River Lee has a cool vibe and a lot of history.

There are two cathedrals in Cork worth checking out: St. Mary's Cathedral and Saint Fin Barre's Cathedral. St. Fin Barre's (Cork's Protestant cathedral) is the more famous of the two, and is certainly striking in photos.

You should also check out the 19th-century Cork City Gaol (where Australia-bound prisoners were once held), and the vibrant English Market, which sells locally produced foods like fish, meats, vegetables, and artisan cheeses and breads.

Not far from Cork, you can visit Blarney Castle and kiss the famous Blarney Stone to receive the “gift of gab.” Don't just go for the stone, though – the gardens at Blarney Castle are also gorgeous!

There, of course, are plenty of other worthy places to add to any Ireland itinerary, too – the country is full of cities large and small that harbor both history and legends, green farmland that stretches all the way to the sea, and some of the warmest, friendliest locals you could ever hope to meet.

Search for accommodation in Ireland here:

The best way to get around Ireland is to self-drive. Check out rental car rates in Ireland at Auto Europe.

Pick up an Ireland guide book:

Tours to check out:

If self-driving isn't for you, you can always base yourself in Dublin and take day trips like these:

Have you visited Ireland before? If so, what other spots would you add to this list? If not, is it in your travel future? 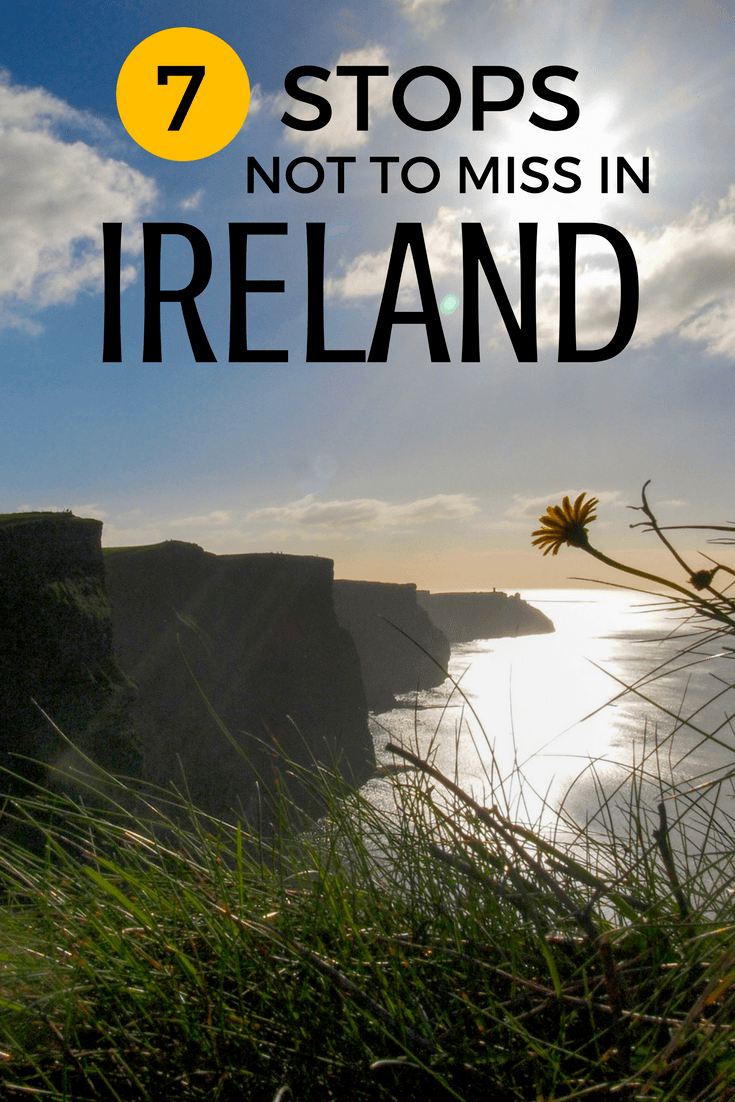 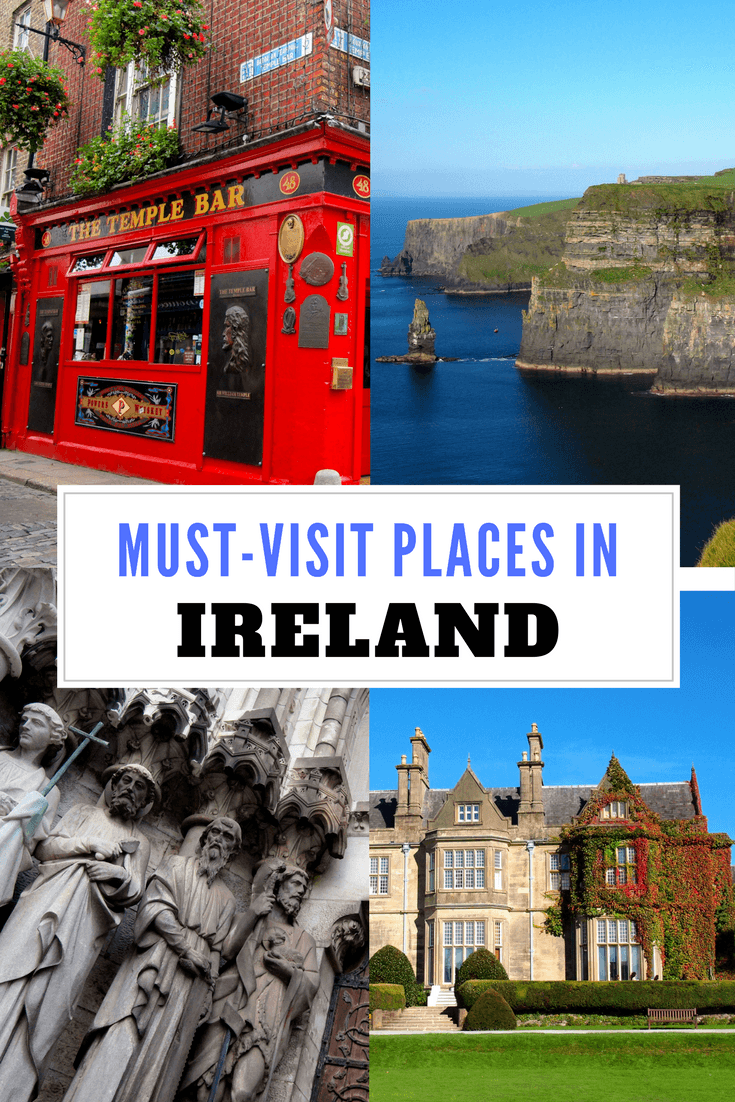 35 Comments on “7 Stops Not to Miss in Ireland”