7 Cities in the Midwest You Need to Visit This Year

When it comes to the US, there are a handful of “darlings” in the tourism world. States like New York and California and Florida get lots of love, as do regions like the Southwest and the Pacific Northwest. But do you know which region gets consistently overlooked by most travelers? The Midwest.

The American Midwest isn't known for mountains or beaches or Disney theme parks; it's known for farms and (former) industry, and for people who are really, really nice.

Maybe that doesn't sound as exciting as other parts of the country, but guess what? The Midwest is awesome, and you should definitely visit.

What is the Midwest?

The Midwestern states are:

I haven't quite visited every corner of the Midwest (I've been to all the states, but have spent more time in some than others), but I've seen enough of the region in recent years to know that the cities of the Midwest are not what they were 10 years ago.

Many Midwestern cities are having a bit of a Renaissance right now, with great food, craft brews, and family-friendly attractions popping up just about everywhere.

Add to this the unique history and beautiful landscapes of the Midwest (because, no, contrary to popular belief it's not all corn fields here!), and you have plenty of places worthy of a visit.

7 cities in the Midwest you should visit

It's always tough to put together a list like this, but here are 7 great Midwestern cities I think you should visit if you haven't already:

Okay, so I'm a bit biased on this one since I only live about 30 minutes south of Cleveland and have lived in northeast Ohio my entire life. But hear me out: Cleveland is way cooler than you probably think it is.

Located right on Lake Erie, Cleveland's history dates back to the late 1700s. It experienced a population boom in the 1800s with the completion of the Ohio and Erie Canal, and it remained prosperous throughout the century. In fact, by 1920, Cleveland was the fifth-largest city in the United States. The city began a rapid decline in the 1980s, though, as the manufacturing industries that the city relied on crumbled.

Three things you must do in Cleveland:

Where to stay in Cleveland: I'm a fan of the new Hilton Cleveland Downtown, as well as the Hyatt Regency Cleveland at The Arcade.

Read more:  10 Unique Things to Do in Cleveland that Really Rock

I mentioned that Cleveland is having a bit of a food renaissance right now – but it's nothing when compared to the food scene blossoming in Indianapolis.

Usually most synonymous with the Indianapolis 500, Indy is, in fact, so much more than just fast cars. The city is bouncing back from economic hard times just like Cleveland, and is similarly rejuvenating various parts of the city to make them much more visitor-friendly.

I spent nearly a week in Indy one summer, and was pleasantly surprised by everything there was to do (and eat!) there.

Three things you must do in Indianapolis:

Where to stay in Indy: You can't beat the JW Marriott right next to White River State Park and within walking distance of lots of downtown attractions.

Read more: 5 Reasons You Didn't Know You Need to Go to Indianapolis

There are lots of excellent places to visit in Michigan, but my favorite so far has been Traverse City in northern lower Michigan. This small town on Lake Michigan’s Grand Traverse Bay is probably the smallest “city” on this list, but I still think it deserves a spot here.

There's something very quaint and cozy about Traverse City itself, and nearby you can find everything from vineyards to gigantic sand dunes. Traverse City hosts the National Cherry Festival each July, but is also a great destination during the autumn if you're looking for some vibrant fall colors.

Three things you must do in Traverse City:

Where to stay in Traverse City: If you want to stay right downtown, my pick is the Bayshore Resort, which has its own beach on Lake Michigan.

Read more: Things to Do in Traverse City in the Fall

Chances are, if you know anything about Milwaukee, you know about its breweries. This Wisconsin city was originally settled by a French-Canadian, but by the mid-1800s large numbers of German immigrants we calling the city home – which probably accounts somewhat for Milwaukee's beer culture.

Like many other cities on this list, Milwaukee suffered a slight economic and population decline in the latter half of the 20th century (though not nearly as pronounced as those in “rust belt” cities like Cleveland). And, also like those other cities, Milwaukee has invested in revitalization efforts in recent years to preserve its historic neighborhoods and draw people back downtown.

Three things you must do in Milwaukee:

If you're in Milwaukee in the summer, you might also want to check out Summerfest, the city's annual lakefront music festival. It's one of the largest music festivals in the world!

Where to stay in Milwaukee: I can personally recommend the Hilton Milwaukee City Center, which is not only in a great central location, but also has a concierge dog named Millie who is pretty much the cutest hotel employee I've ever met!

I know I've already included one Ohio city in this post, but I'm going to include another. Because I can. And also because Cincinnati deserves a spot here!

Cincinnati's history is interesting. The city was settled in 1788 not long after America gained its independence, and quickly became a “boom town,” growing rapidly in both population and wealth. In fact, by the mid-1800s, Cincinnati was one of the largest and most prosperous cities in America. Like Milwaukee, Cincinnati eventually drew a large number of German settlers, which is still reflected today in neighborhoods like Over-the-Rhine.

The boom years of Cincinnati faded after the Civil War, and the economic downturn that affected many other rust belt cities 100+ years later hit Cincinnati hard, too. But Cincinnati is on a comeback route, too (are you seeing a trend here??).

Three things you must do in Cincinnati:

Where to stay in Cincinnati: My picks are either the historic Hampton Inn & Suites Cincinnati-Downtown for a walkable downtown location, or the Aloft Newport on the Levee (which is technically across the state border in Kentucky) if you want to save some money.

Read more: How to Spend 48 Hours in Cincinnati, Ohio

I can't write this list and not show South Dakota (in my opinion, one of the most overlooked states in the US by travelers) some love. Even though it's usually regarded as a Great Plains state, South Dakota firmly falls into the list of Midwestern states, too.

And if you're only going to visit one part of this state, make it Rapid City in western South Dakota.

Rapid City itself has always been a tourist hotspot because of its proximity to attractions like Mount Rushmore, Deadwood, and even Badlands National Park. Rapid City is fairly small, but it has a growing craft beer scene and some fun sculpture projects around town (like the bronze statues of all the American presidents scattered around downtown).

But the real draw here is Rapid City's proximity to the Black Hills.

Three things you must do in the Black Hills:

Where to stay in Rapid City /Black Hills: If you want to stay in a non-chain hotel in the heart of Rapid City, check out the historic Hotel Alex Johnson.

Okay, so I can't talk about the Midwest and not mention Chicago. Chicago is the largest city in the Midwest, and the third-largest in the United States.

But, even though it's a big city, Chicago is still manageable to explore as a tourist. (And I'm not alone in thinking so – Chicago is consistently one of the most-visited cities in the US every year.)

Chicago's history dates back to the mid-1800s, and the city has always been an important transportation hub between the eastern and western United States. It suffered the Great Fire of 1871, but continued to prosper right on through the 1900s. Today, the city is home to more than 2.7 million people.

Let me just say that I LOVE Chicago. If I were ever going to move to a big city in the US, I'm 99% it would be this one. I've been to Chicago numerous times with different people (friends, family, significant others) and always find something to do.

Three things you must do in Chicago:

Chicago also has a collection of great museums. If you hit a rainy (or cold or super windy) day, my favorites are the Field Museum of Natural History and the Museum of Science and Industry.

Where to stay in Chicago: I really love the Raffaello Hotel, which is located a block from the John Hancock Building and Michigan Avenue. The hotel also has one of the best bars in the city (DrumBar) on its top floor.

Now, I know this list is incomplete – there are so many other great cities and regions in the Midwest that I could have included, but I had to cut the list off somewhere!

I'd love to hear you suggestions of other great Midwestern cities in the comments. Or, tell me which of the listed cities you'd most like to visit! 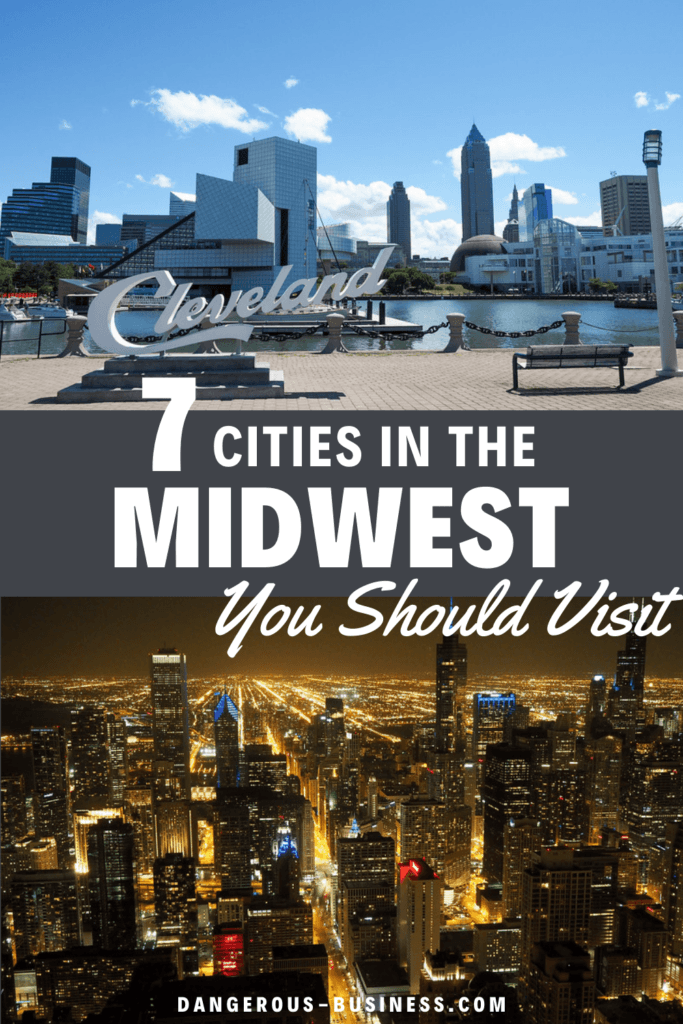