7 Things to Do on A Couples Weekend Getaway to Chicago

When people ask me about my favorite cities in the US, there are a few that will always make my list. Cities like New Orleans, San Francisco, Savannah – and Chicago.

The Windy City is and has been one of my favorite US cities since I visited for the first time in college.

I love the architecture, the food, the museums, the location on Lake Michigan, and how easy it is to get around in Chicago. It's one of the top places I recommend people visit if they're looking to plan a weekend city break in the US.

So when Greyhound approached me about traveling somewhere with them from my home base near Cleveland, Ohio, Chicago was one of the first cities that came to mind.

I'd been to Chicago a handful of times already, but my previous trips had been with friends and family members. This time around, I wanted it to be a couple's trip and invited my partner Elliot to come along.

Because while it might not immediately scream “couples destination,” you can definitely find plenty of romantic things to do in Chicago!

Romantic things to do in Chicago on a long weekend

We arrived in Chicago on a Friday evening and had two full days to enjoy the city, plus some time on Monday morning before heading back to Cleveland.

If you're planning a similar trip to Chicago, here are all the highlights you won't want to miss:

1. Cozy up on an architecture tour

Chicago is known for its architecture – it's the home of the skyscraper, after all! – so you'll definitely want to get up close with some of the city's unique buildings.

The most popular way to get to know the architecture in Chicago is to go on an architecture boat cruise on the Chicago River. The Chicago Architecture Foundation operates the original 90-minute cruise, but several other companies also offer options at competitive prices.

All the river cruises are fully narrated by a live guide and cover decades of Chicago's architectural history. These are, hands down, the best way to see the city.

(And, if you believe that it's good luck to kiss your honey under a bridge, you'll have ample opportunity on one of these cruises, since Chicago has a lot of bridges!)

There are also cruises that include both the Chicago River and Lake Michigan, as well as romantic sunset cruises.

If you're in the city outside of the cruises' operating season (river cruises only run April-October), though, don't worry; there are still plenty of options.

On our trip together (which was outside of river cruise season), Elliot and I booked an interior architecture walking tour that took us into some buildings we probably would have never visited otherwise!

Along with seeing the Tiffany dome at the Chicago Cultural Center, we also visited the former Marshall Fields building, traversed some of Chicago's underground Pedway, and even visited a church inside a skyscraper. Chicago's architectural history is so fascinating.

(Unfortunately the exact walking tour we took isn't offered any longer, but this one is really similar!)

2. Hold hands at an observation deck

Chicago has two very tall towers, each with a very cool observation deck near the top floor.

The most famous is the Skydeck at the Willis Tower (formerly the Sears Tower), but 360 Chicago at the (former) John Hancock Building is also a great option for sweeping city and lake views.

Elliot and I visited both observation decks with our Chicago CityPASS (get one of these if you plan to do a lot of sightseeing!), but the experience is fairly similar at both.

If you need help deciding which one to visit, check out this blog post.

Going up one of the towers around sunset can add an extra bit of romance to your visit, and the 360 Chicago also has a bar on the observation deck level, so you can sip a glass of wine or a cocktail as you enjoy the view.

RELATED: Willis Tower Skydeck vs. Hancock 360 Chicago: Which Is Best?

Museums are ALWAYS a good idea for a day date, and Chicago has several world-class ones to visit. The most famous museums include the Field Museum of Natural History, the Art Institute of Chicago, the Museum of Science and Industry, and the Museum of Contemporary Art.

But don't forget the Adler Planetarium and the Shedd Aquarium, too, both of which are located on “Museum Campus” along with the Field Museum.

I love the Museum of Science and Industry (they have a WWII-era submarine and a whole room just about the science of weather!!), but on this trip Elliot and I visited the Field Museum. It was my first time there, and I was blown away by the quality of the exhibits.

Two and a half hours was not enough time!

4. Stroll through some parks

Chicago has a lot of green space and public park land – and a lot of it is close to the lake shore.

If you're looking for a great place for a walk, head to Millennium Park and Grant Park. Here you'll find the famous Cloud Gate sculpture (AKA “The Bean”), the Jay Pritzker Pavilion, Buckingham Fountain, and so much more.

If you have your walking shoes on, you can actually walk all the way from Millennium Park through Grant Park to Museum Campus.

You can't really visit Chicago without trying some of its famous deep dish pizza. I took Elliot to the original Gino's East on Superior since it was really close to our hotel, but there are tons of options for deep dish in the city.

Tip: Deep dish pizza usually takes 45-60 minutes to cook, so be sure to allow yourself enough time for a long meal!

If you're really interested in the history of pizza in Chicago, there are also a number of food tours you could join – including this pizza tour of Chicago!

This was my first trip to Chicago where I made it a point to try some of the best bars in the city – mostly because Elliot enjoys a good Old Fashioned every now and then.

DrumBar (a speakeasy-style bar with a rooftop deck) was right at the top of our hotel, and we also made our way up to the Signature Lounge at 875 North Michigan Avenue (formerly the John Hancock Building) one night.

The Signature Lounge is located on the 96th floor of the former Hancock Building (the same building where you'll find 360 Chicago), meaning you get amazing views out over Chicago along with your drinks.

Go up here after dark to see the city illuminated – you can skip the observation deck line, and get the same view for the price of a beer or cocktail.

Chicago has a number of really nice rooftop bars. Others you might want to check out include the one atop the LondonHouse Hotel, and Offshore, which is a massive rooftop bar at Navy Pier.

7. Laugh together at some improv comedy

Another of my absolute must-dos in Chicago is to see some improvised comedy. Chicago is home to Second City, an improv school and performance center that boasts alumni like Bill Murray, Steve Carell, and Tina Fey. But Second City isn't the only place to catch live improv in Chicago – there are tons of shows and venues to choose from!

I decided to take Elliot to see my very favorite show in Chicago: the Improvised Shakespeare Company. During each show, the cast totally improvises a complete play in the style of Shakespeare, based on title suggestions from the audience.

Elliot was a bit skeptical, but afterwards even he agreed that this group is phenomenally talented (and very, very funny).

Where to stay in Chicago

There are lots of romantic hotels to enjoy in Chicago depending on your budget. Some favorites of mine to check out include:

Chicago is extremely well-connected to just about everywhere in the US. O'Hare is a major airline hub with connections to most major cities (including international ones), and the city is also served by trains and buses.

Elliot and I went to Chicago with Greyhound on this trip. We left Cleveland at 12:30 p.m. on a Friday afternoon, and our trip took just about 8 hours total.

It takes slightly longer than if you were to fly from Ohio, but the price difference (one-way bus tickets from Cleveland to Chicago are usually less than $40) and the fact that you don't have to deal with the TSA made it well worth it in our opinion.

I had planned to utilize Greyhound's free onboard wifi and power outlets to get some work done on the ride to Chicago, but found myself perfectly content to listen to music, doze a bit, and watch the Midwestern scenery outside the bus window instead.

And, even though we weren't on an Express route, the ride didn't really seem all that long.

Traveling with Greyhound reminded me that there ARE alternatives to driving and flying in the US, which is something that I feel like I often forget when traveling in my own country.

While I definitely think road tripping is one of the best ways to see America, the fact is that I would never want to drive to Chicago for a long weekend – the traffic is insane, and parking isn't cheap. Going by bus was a great alternative.

(You can check out Greyhound's route map here to see where all they go.)

Chicago is one of my favorite cities in the US, and makes for a perfect weekend getaway whether you're traveling with a significant other, friends, or the whole family.

If you're planning a trip to the US, don't skip Chicago!

What are some of YOUR favorite things to do in Chicago?

Big thanks to Greyhound for sponsoring this weekend trip to Chicago. As always, all opinions are 100% my own. 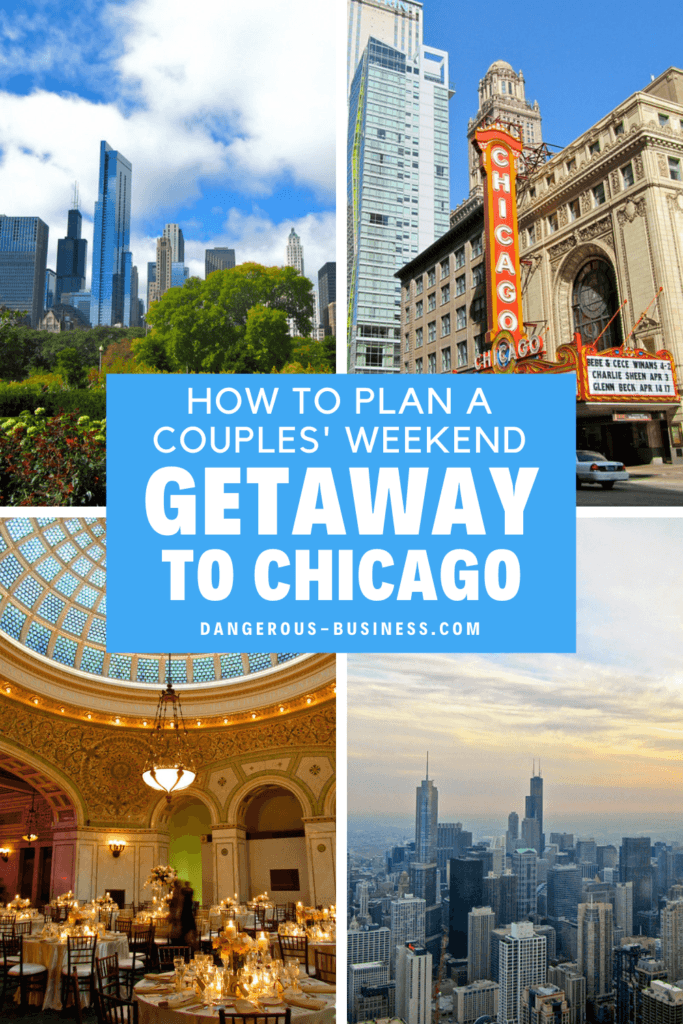