When it comes to the United States, there are definitely certain states that get all the love. Everyone wants to visit California and New York. Florida and Texas are recognizable around the world. Hawaii and Alaska are on many a bucket list.

And I get it – those famous states are definitely cool and have lots to offer. But what about all the other states? (There are 50 of them, after all!)

In the past few years, I've made it a point to travel more within the US, both to the popular hotspots AND to the states that people tend to look over.

I've gone to amusement parks in Florida, explored the famous Mighty 5 in Utah, and eaten my way through New Orleans. But I've also explored the deserts of New Mexico, driven across Montana, and highlighted some cool parts of my home state of Ohio.

And on a recent road trip with my sister, I discovered a new state that swiftly became one of my favorites: South Dakota!

An introduction to South Dakota

South Dakota – just south of North Dakota in the Midwestern region of the US – is probably not the first state that comes to mind when you think about “states I definitely have to visit.” But the state is surprisingly interesting!

South Dakota became a state in 1889 simultaneously with North Dakota, which together had formerly been the “Dakota Territory.” The state's name comes from the Lakota and Dakota Sioux tribes, which traditionally called (and still call) the area home.

The state is very sparsely populated, being home to less than one million people. You'll find lots of grasslands (South Dakota is considered part of the Great Plains region), and not very many large cities.

But, believe it or not, tourism has become a key industry in South Dakota. And that's because there's actually a lot to see in this oft-overlooked state!

As mentioned above, the Dakotas were named after indigenous peoples, and many of them still reside there. Roughly 71,800 Native Americans still live in South Dakota, accounting for more than 9% of the state's population.

Native American populations in America have long been repressed and underserved, so it's worth considering how your trip can affect (and hopefully contribute to) indigenous-owned businesses in tourism.

If you're interested in getting to know South Dakota's Native American culture, this list from Travel South Dakota is a good place to start.

My sister Melissa and I spent a couple of days driving across South Dakota this past summer (here's our full road trip itinerary), and here are just a few of the reasons I think you should dedicate some time to this state:

In my humble opinion, Badlands National Park on its own is reason enough to visit South Dakota. It was the #1 place I wanted to visit in the state, and it did not disappoint.

The national park is filled with “badlands,” which describes a dry, crumbly terrain where softer sedimentary rocks and soils have been heavily eroded by wind and water. This unique type of erosion often causes interesting rock formations and patterns – and you'll find plenty in Badlands National Park.

My sister and I spent half a day here doing a couple short walks and watching fossils being uncovered at the visitor center, but you could easily spend a full day in this park!

South Dakota's Black Hills region is probably most famous for Mount Rushmore, the sculpture of the busts of 4 US presidents that were carved into the Black Hills granite in Keystone, South Dakota.

Even though I knew the heads were going to be smaller than expected and that we'd have to pay to park our car (even though the monument itself is free), Melissa and I wanted to see it anyway. And you know what? I'm glad we did!

We went around dusk, when they play a video about the four presidents memorialized and then light the faces up after a little ceremony.

If you ask me, though, Custer State Park is the true gem of the Black Hills. It's one of the largest state parks in the United States, covering 71,000 acres. It's known for its wildlife (especially its bison herds), its fishing lakes and resorts, and its scenic drives – including the famous Needles Highway.

The Needles Highway is the highlight if you only have enough time to pass quickly through the park like we did. The scenic drive takes you up close and straight through several really cool rock formations.

If you have time, though, I would recommend allowing more than just a couple hours here to really enjoy the scenery.

Hands up if “Jurassic Park” made you want to be a paleontologist when you were a kid. I know it was certainly on my list of potential grown-up careers! And the cool news is that South Dakota is chock full of fossils. You'll find dinosaur skeletons and replicas all across the state.

But one of my favorite spots that we visited doesn't date back to the dinosaurs – it dates back to the days of the mammoths.

Simply called Mammoth Site, this spot in Hot Springs, South Dakota, is literally one of the coolest things I've seen with my own two eyes. 26,000 years ago, there was a sink hole in this spot that claimed the lives of dozens of mammoths – and then preserved their remains.

Today, Mammoth Site is an active paleontological dig site. It contains the world's largest concentration of mammoth bones (actual bones, not fossils!), and you can see what they've uncovered up close.

South Dakota doesn't have very large cities, but the cities it does have are cool in their own right. Melissa and I enjoyed checking out Falls Park in Sioux Falls, and Rapid City is somewhere I'd like to fully explore sometime (we more or less only stayed overnight and didn't really have time to see much!).

Since I haven't written about these cities, here are a couple posts by fellow bloggers that can help prove my point on this one:

South Dakota also does its roadside attractions quite well. The most famous is of course Wall Drug, which started out as a small-town drug store and now covers an entire city block with all sorts of kitsch and craziness. Visit later in the day to beat the tourist crowds who flock from all over to wander the shops and get their free cup of ice water or 5-cent cup of coffee.

Another (similar) roadside attraction is Al's Oasis, a rest stop along I-90. It looks like an Old West town outside, and has everything from a grocery store to souvenir shops inside.

Crazy as it might seem, Melissa and I didn't have enough time to do/see everything we wanted to in South Dakota! Still on my “must-do” list are:

Who's ready to plan a trip to South Dakota now? 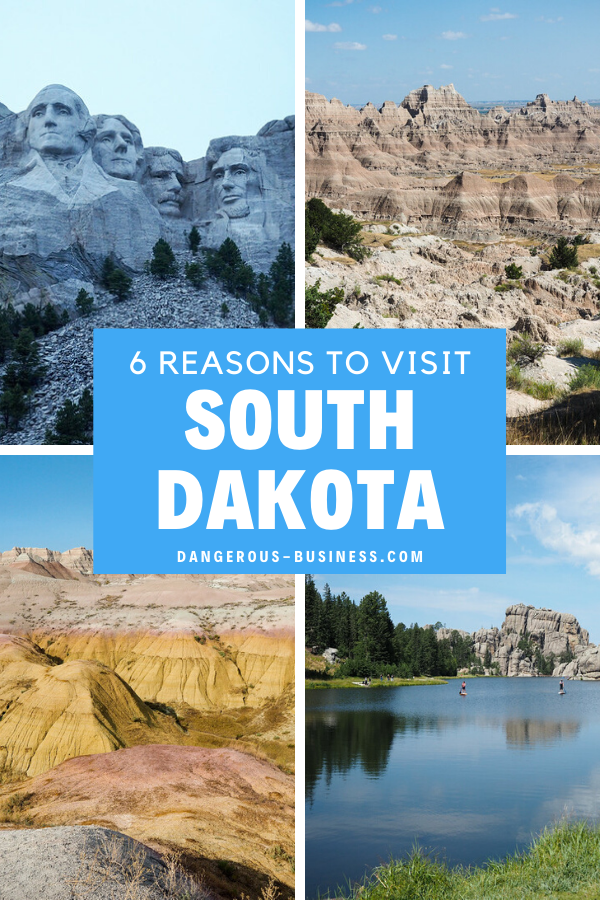 48 Comments on “6 Reasons You Should Definitely Visit South Dakota”