Things to do in Traverse City in the Fall

If you've heard of this small city in northern lower Michigan at all, you might know it as the Cherry Capital of the World (or at least of the US) thanks to the fact that it grows the majority of the cherries in the United States.

But if you can't make it to Traverse City's National Cherry Festival in July, don't worry – this city is actually great to visit in other seasons, too.

And if you have to pick a season other than summer to visit Traverse City, I would tell you to pick fall.

In the fall, Michigan transforms from green forests and blue lakes to a cacophony of other vibrant colors – reds, yellows, oranges, even purples appear. And this is especially true in and around Traverse City.

A bit of Traverse City history

Traverse City sits on Grand Traverse Bay, an arm of northern Lake Michigan. The area was originally inhabited by the Ojibwe, Ottawa, and Potawatomi people, who called this area Kitchiwikwedongsing or Wequetong, which translates to “at the head of the bay.”

These peoples were eventually displaced by European settlers who moved into the Northwest Territory. The first permanent (European) settlement was started on the Old Mission peninsula in 1839, with the village of Traverse City springing up more than a decade later around a sawmill and new post office.

Traverse City was connected to rail lines not long after, and was officially incorporated as a city in 1895.

The city has always been known for its cherry trees; the very first ones were planted on the Old Mission Peninsula in the 1850s, and are still by far the largest crop in the region.

Things to do in Traverse City in the Fall

One of the must-do things, of course, is to take a drive (or multiple) to enjoy the area's fall foliage. You'll find some right downtown, but I'd also recommend driving up into the Leelanau Peninsula and Old Mission Peninsula to see even more colors.

The small towns on both peninsulas are great places to go leaf-peeping, with the town of Cedar being a personal favorite.

The Traverse City area is well-known for its cherries, but it's also one of Michigan's largest wine-producing areas. In fact, the Leelanau Peninsula is one of five American Viticultural Areas (AVA) in Michigan and is known for its white wines (especially Rieslings).

There are nearly a dozen wineries on the Old Mission Peninsula, and another 25 on the Leelanau Peninsula.

Old Mission wineries worth visiting include Brys Estate, Mari Vineyards, and Chateau Chantal (which has my favorite views).

On the Leelanau Peninsula, check out Blustone Vineyards (the views from their tasting room in the fall are phenomenal), Leelanau Wine Cellars (they make popular spiced wines for fall called “Witches Brew,” which they serve hot!), 45 North Vineyard & Winery, and French Valley Vineyard.

All of these wineries (along with many others) offer tastings and have beautiful peninsula views. You will definitely be able to soak up the fall colors!

RELATED: How to Spend One Epic Day on Michigan’s Leelanau Peninsula

(And if you want to visit a bunch of Old Mission wineries in one go? Book a winery tour like this one so you don't have to worry about driving yourself.)

Don't fancy wine? Then you could also visit the Grand Traverse Distillery. They have a tasting room in downtown Traverse City, but if you drive out to the actual distillery you can do a quick tour and four tastings (complete with souvenir tasting glass) for $10.

They are known for their True North vodka, which has won tons of awards, but also have bourbons and rums and gin, too. This is a true craft distillery, distilling just one batch at a time.

3. Tour The Village at Traverse Commons

What do you do when you have an old, sprawling former mental asylum sitting unused not far from a small Midwestern city? You turn it into a hub for food, shopping, and living, of course!

At least, that's what Traverse City is doing with the old Traverse City State Hospital, which served as a mental institution from 1885 until 1989. Now, it's the Village at Grand Traverse Commons.

The story of the building is actually pretty amazing – unlike those horrid places you've seen on TV, the Traverse City State Hospital was actually very progressive, adopting a “beauty is therapy” philosophy very early on.

Today, the whole site is being converted into shops, restaurants, offices, apartments, and even condos.

I highly recommend the 2-hour historical tour here – for $30 you can learn all about what the buildings used to be and what they will become. And the tour ends with a trip down into the old underground steam tunnels; and who doesn't love a good underground tunnel, especially right around Halloween??

Even though the cherries have long since been picked, there are plenty of other harvest-related activities and foods this time of year. Like apples. And pumpkins.

You can find lots of fall produce for sale at adorable roadside stands all throughout the peninsulas near Traverse City. (Just be sure to have some cash on you, as many of these stands run on an honor system and you just leave money for whatever you take.)

Being situated on a multiple Great Lakes means that Michigan has no shortage of lighthouses – and this is true in the Traverse City area, too!

There are two historic lighthouses you can visit, one each at the end of the Old Mission and Leelanau peninsulas.

On the Old Mission Peninsula, you can drive out to the Mission Point Lighthouse, which dates back to 1870. There's a small museum inside that you can visit for $5, and visitors can also climb to the top of the lighthouse for lovely views out over the lake.

The Leelanau Peninsula has a similar historic lighthouse called the Grand Traverse Lighthouse. This one dates back to the 1850s (the current one was completed in 1858), making it one of the oldest lighthouses on the Great Lakes.

Admission to this lighthouse is also $5, though the lighthouse sits within Leelanau State Park, which has its own separate entry fee ($9 for cars with out-of-state plates).

6. Take an afternoon trip to the Sleeping Bear Dunes

You can't visit Traverse City without making the 25-mile trip out to Sleeping Bear National Lakeshore and its impressive sand dunes standing sentinel over Lake Michigan.

Sleeping Bear was voted the most beautiful place in America a few years ago, and it certainly does feel that way on a sunny autumn day.

Once you're here, drive the short Pierce Stocking Scenic Drive for fall colors and amazing lake views, and try a dune or two at the Dune Climb area.

This spot is managed by the National Park Service, and does charge a $25 entry fee.

And, even though there are plenty of day trips and half-day trips to take from Traverse City, don't skip the city itself!

Wander down Front Street for some shopping, check out the State Theater and its glittering marquee, take a stroll along the river or lakefront, and plot out where you're going to eat (there are lots of options!).

Where to stay in Traverse City

If you don't mind being a little ways outside of town, consider staying at the Grand Traverse Resort and Spa. With shops and a spa and multiple golf courses, it's a great getaway spot.

Within Traverse City itself, there are quite a few chains hotels available (with the Cambria Hotel being the highest-rated). We stayed at the Bayshore Resort, which is located right on the lake shore (with a beach of its own out the back) and is within walking distance of downtown.

A little ways outside of the city, the Cherry Tree Inn and Suites is also popular.

There are also some nice vacation rentals in the Traverse City area, too, including this condo in the Grand Traverse Commons, and this East Bay condo with great views. A little further away, this modern farmhouse is dreamy.

Where to eat in Traverse City

Traverse City and the surrounding peninsulas are full of great places to grab a bite. Some of my favorites include:

Have you ever been to Traverse City? If not, would you like to go?

*Note: Big thanks to Traverse City Tourism, the Grand Traverse Resort and Spa, and the Bayshore Resort for hosting us during our first trip! 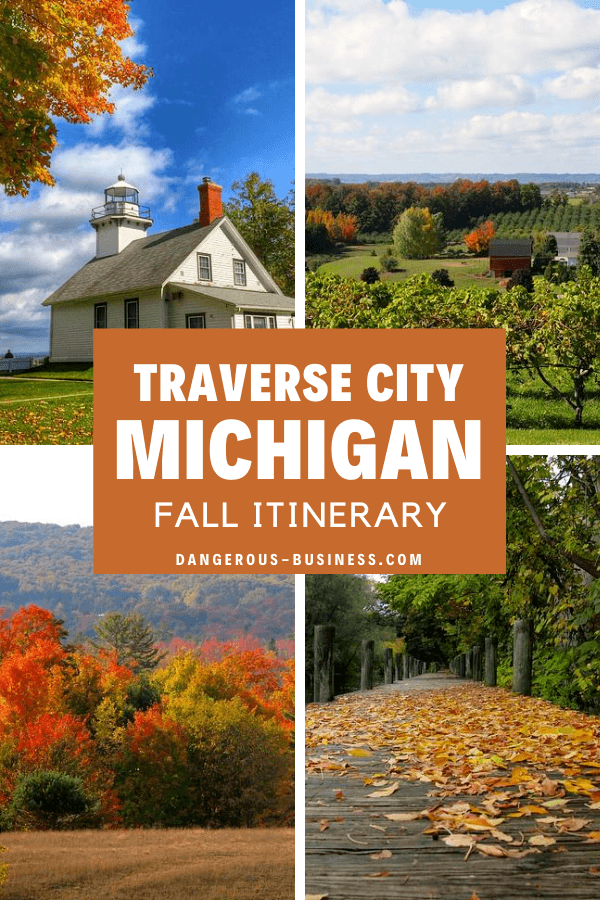