When you hear “Indianapolis,” what immediately comes to mind?

Most likely you first think of the Indianapolis 500 – the famous automobile race that's been dubbed “The Greatest Spectacle in Racing.”

And that's fair. But I'm here to let you know that Indy is much more than just the Indianapolis Motor Speedway.

I recently spent some time in Indianapolis for a blogger workshop called Bloghouse, and got the chance to get a feel for the city during my few days there.

And all I can say is Indy is super cool.

Like many Midwestern/Rust Belt cities, Indianapolis is undergoing a bit of a renaissance right now. There's more going on in the city than ever before, and I'd encourage you to visit before the secret about Indy really gets out.

Car racing aside, here are all the other reasons you didn't know you needed to visit Indy:

Indy's food scene is exploding. From food trucks to fine dining, you'll find just about everything in Indianapolis. And not only is the food affordable, but it's also GOOD. Like, really good.

Some of my favorite eats in Indy included:

You can also check out Public Greens, a non-profit “urban cafeteria and microfarm;” Metazoa, a pet-friendly brewery; and Locally Grown Gardens for a slice of Indiana's famous sugar cream pie.

If it's green space you're craving, look no further than White River State Park, which covers 250 acres in downtown Indianapolis. It features canals, sculptures, a summer concert venue, and some of the best views of the city.

You can see the park by bike, paddle boat, on foot, or even by Segway. And if you're headed to the Indianapolis Zoo, it's located at one end of the park. Definitely head down here at least once to catch a sunset.

Fun fat about Indianapolis: it is home to the largest children's museum in the world! And the Children's Museum isn't just for kids, either. With exhibits on American pop culture, dance, space, and more, it's a place the whole family can enjoy.

They also have an extensive collection of dinosaur fossils, including a mummified Brachylophosaurus and a first-of-its kind fossil that the museum and local community got to name.

They named the dragon-esque dino Dracorex hogwartsia. And yes, that's a Harry Potter reference. And yes, they got JK Rowling's permission! (She said it was one of the coolest honors she's ever received.)

Being the largest children's museum in the world, though, I would caution families to check out the exhibits online ahead of time and create a game plan. If you have young kids, there's no way you'll see everything in the museum in one visit!

Indianapolis has some other unique museums, too. Such as:

Another thing you probably didn't know about Indy? It's second only to Washington, D.C. for the number of war memorials it has.

The largest memorial is the Indiana World War Memorial, which stands more than 200 feet tall.

And also recognizable is the Soldiers and Sailors Monument, which sits on a circle that marks the physical center of the city of Indianapolis.

Winding through Indianapolis' neighborhoods and cultural districts is the Cultural Trail, a bike and pedestrian-friendly path that connects some of the coolest spots in the city.

Pick up a bike from the Indiana Pacers Bikeshare program, or hit one of the paths on foot. Along the way, keep an eye out for artwork and architecture.

And, lastly, you can expect to find the world-famous Midwestern hospitality in Indianapolis. It's a stereotype that Midwestern people are super nice – but I'm convinced that the stereotype has its roots in cities like Indy.

Indy is also a very SAFE city. Even when walking around by myself after sunset, I never once felt unsafe downtown.

RELATED: 7 Cities in the Midwest You Need to Visit

Where to stay in Indianapolis

The JW Marriott was “home” for us during Bloghouse. The hotel hosts tons of conferences and meetings each year and is quite large. But it's also a beautiful hotel with great service and comfortable rooms.

It's located right next to White River State Park and is within walking distance of lots of downtown attractions.

If you want to branch out from downtown Indy, consider a bed and breakfast in Indy's Old Northside neighborhood. This tree-lined neighborhood is filled with gorgeous old Victorian homes and has a very quiet, laid-back vibe.

I stayed for one night at the Looking Glass Inn, which is a comfy B&B in an old historic house.

You can also check out:

(And you can grab dinner or drinks at Tinker Street Restaurant & Wine Bar on E. 16th Street – I had an AMAZING burger here!)

Overall I was really pleasantly surprised by my short time in Indianapolis. The city is much cooler than I expected, and I can definitely see myself returning for a longer visit in the future.

Hopefully this post has given you some reasons to visit Indianapolis!

Have you ever been to Indianapolis? Would you want to visit?

*Note: This post is brought to you in conjunction with Bloghouse and our great 2017 sponsors, which included Visit Indy, Visit Indiana, and the JW Marriott Indianapolis. 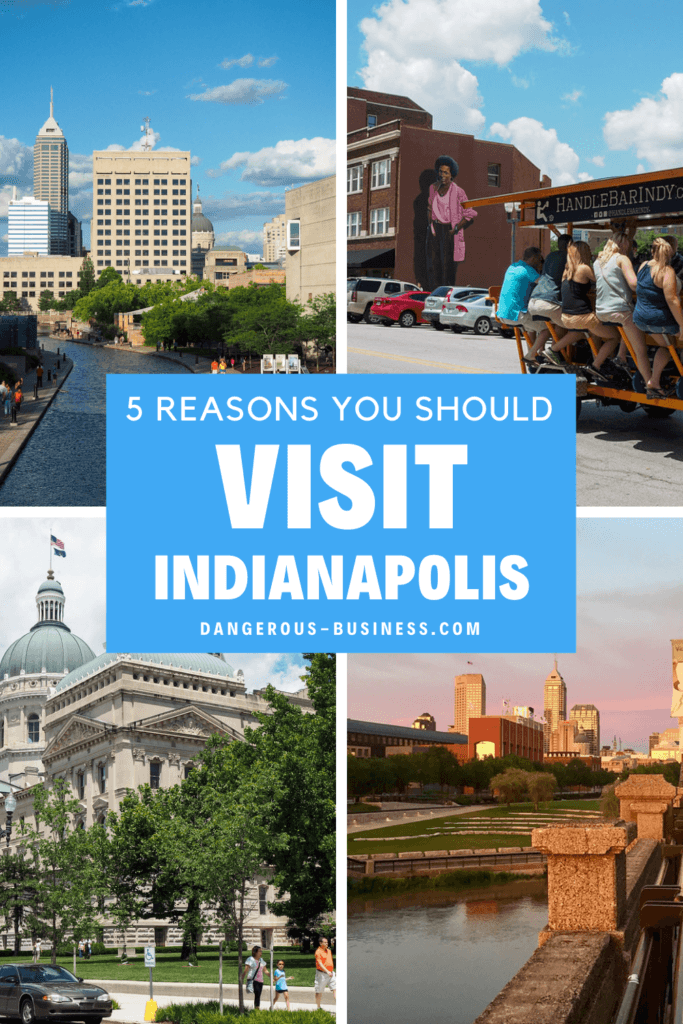