A Couples’ Long Weekend Getaway to Orlando with Spirit Airlines

I'm not one of those people who hates winter.

I like how the trees look under a fresh coating of snow. I like cuddling up with a soft blanket and hot cup of tea at night. And I actually kind of like bundling up in warm scarves and sweaters and colorful hats.

But I'd be lying if I said I never think about escaping Ohio winters, at least for a little while.

I mean, I don't love repeatedly cleaning snow off my car, or driving on icy roads. And I really hate that phenomenon where your nose hairs freeze when it drops below a certain temperature. Add to this fewer daylight hours, perpetually chapped lips, and the salt stains that will plague all my cute boots, and there are certainly plenty of things to want to get a break from. 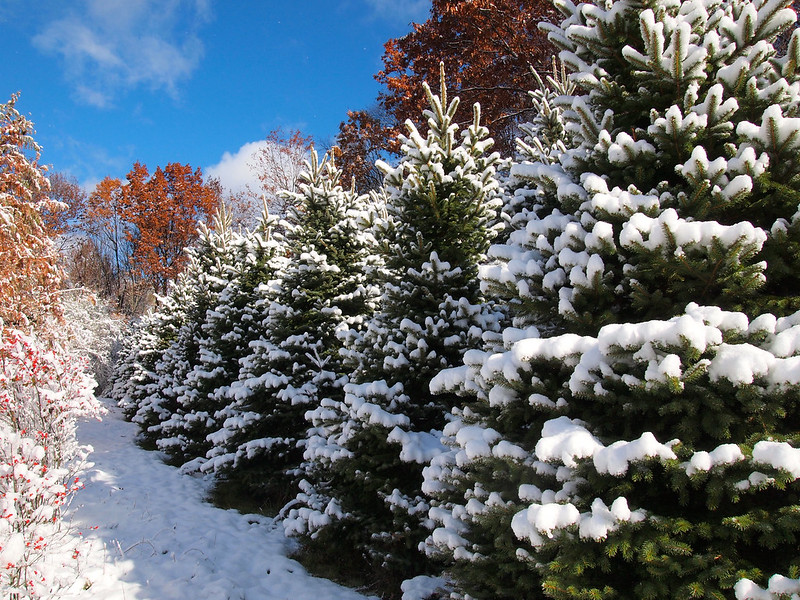 Knowing that winter was indeed coming, my partner Elliot and I were already talking about a pre-winter getaway back in July. We talked about going to Puerto Rico or California. Maybe even Belize.

But then we found out that Spirit Airlines was going to be starting direct flights from the Akron-Canton airport to various cities in Florida in late November. And just like that, our destination was set: We decided to go to Orlando for a long weekend in order to act like the kids-at-heart that we really are.

A Couples' Getaway to Orlando

We decided that “go big” was going to be our motto in Orlando. I knew I wanted to go back to Universal to visit both their Harry Potter parks, but we also kind of wanted to visit a Disney World park since Elliot's only experience with Disney has been at Disney Land in California.

Here's what we got up to with almost 4 full days in Orlando in December:

Traveling the world in Epcot

We decided Epcot was the Disney park we wanted to devote a day to, since it's definitely one of the more adult-friendly parks (I mean, you can pretty much get alcohol at every country in the World Showcase!). We rode the iconic Spaceship Earth (because, I mean, Epcot), watched Taiko drummers in Japan, admired the stave church in Norway, took photos with tiled fountains in Morocco, and even met Marry Poppins in the United Kingdom.

And then we splurged (and I mean it) on dinner at the Biergarten in Germany. It really did feel like a German beer garden, complete with atmospheric decorations, long shared tables, live music, and of course liters of beer. The food was also really good, though I don't know if I would pay $40 per person for a buffet again!

We rounded out our night in Epcot by watching the IllumiNations light/fireworks show, which is easily one of the best I've seen on my travels – it's definitely worth sticking around for! 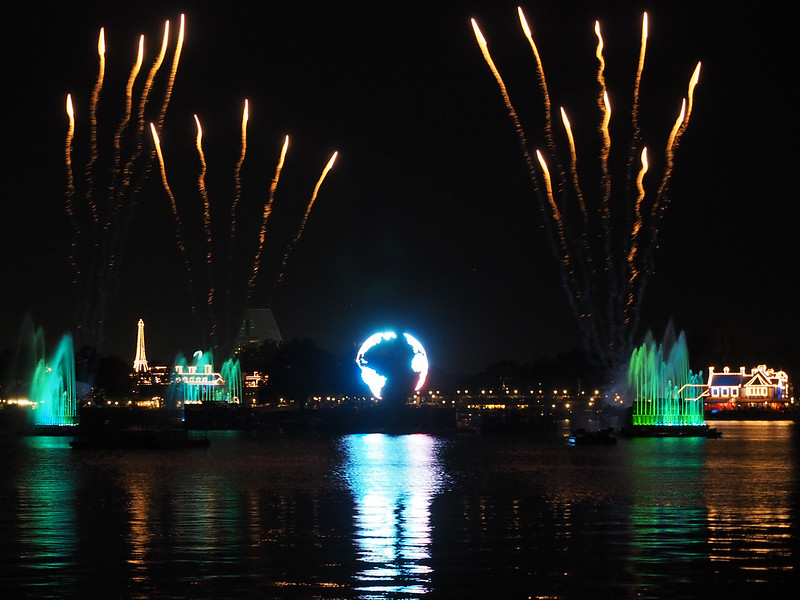 The next two days were spent at Universal Studios and Universal Islands of Adventure. While we did hit up rides like the Hulk Coaster, the Rip Ride Rockit (SO FUN), Revenge of the Mummy, and the new Skull Island: Reign of Kong ride, I would be lying if I said we didn't spend the majority of our time in Hogsmeade and Diagon Alley, the two Harry Potter parks. 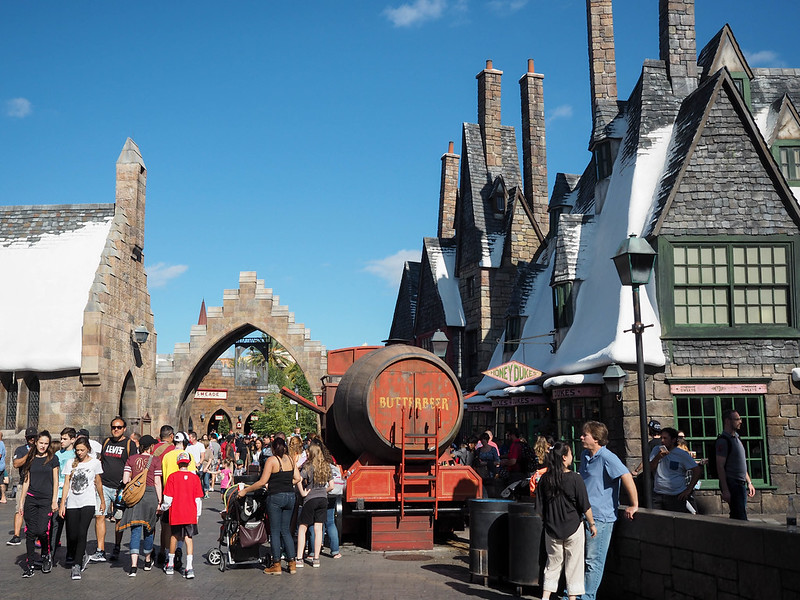 We drank lots of butterbeer, had a meal at the Leaky Cauldron, rode the Hogwarts Express, and giggled like kids when we walked into Gringotts. I also bought an interactive wand and made it a mission to do all the “spells” in both parks. I was terrible at it at first, but got pretty good at swishing and flicking by the end of our second day!

(Check out my video of our time at the Harry Potter parks here.) 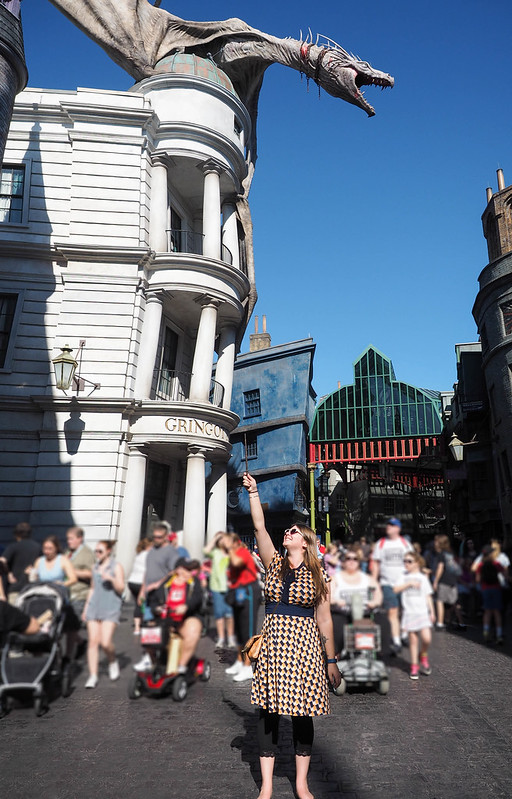 If anyone tries to tell you that these parks are just for kids (or for adults traveling with their kids), don't listen to them. We had tons of fun as adults, too.

RELATED: 10 Things to Do at the Wizarding World of Harry Potter in Orlando

Getting into the holiday spirit 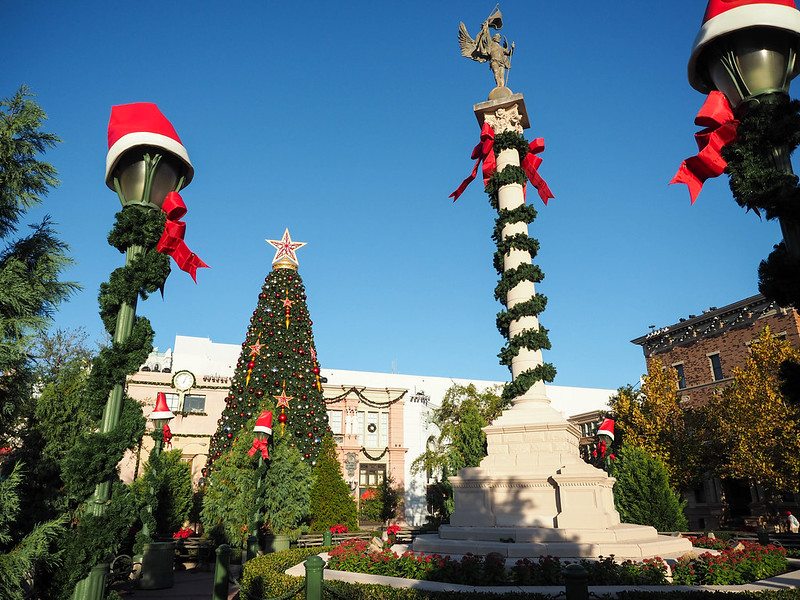 Visiting in early December meant that all the Orlando parks were already decked out for Christmas.

We admired the tall Christmas tree and holiday-themed topiary in Epcot, and got Christmas-y at Universal with both the Macy's Holiday Parade and the Grinchmas Who-liday Spectacular show.

Even though this Ohio girl had a hard time believing it was the holidays while wearing shorts in sunny, 75-degree weather, I can't say that I hated it.

After our Biergarten splurge in Epcot, we tried hard not to break the bank for the rest of our meals. Luckily, you can find a lot of affordable food at Universal's CityWalk.

The Cowfish – When I first saw “Sushi Burger Bar” on the side of this place, my immediate thought was “No.” But one look at the menu quickly changed my mind. Cowfish does both sushi and burgers, but is probably best known for its “Burgushi” – sushi rolls created using burger components, and sandwiches created using sushi ingredients. We ordered some of the burger sushi, and it kind of blew my mind.

Pat O'Brien's – After going to New Orleans for the first time in November of this year, I'm now kind of obsessed with NOLA food. So when we discovered that CityWalk has a New Orleans-themed restaurant (complete with courtyard patio and dueling pianos), I insisted we eat there. The shrimp po' boy was pretty good, and it was nice to get a red beans and rice fix.

Toothsome Chocolate Emporium & Savory Feast Kitchen – On our last day in Orlando, we decided to go for lunch at the new steampunk-themed restaurant and dessert bar on CityWalk. The theme is really fun, and you'll find hints of chocolate in many of the main dishes. I went with a burger (which was yummy), and we shared an amazing chocolate dessert. I also ogled the ridiculous milkshakes that I couldn't drink because of mild lactose intolerance. 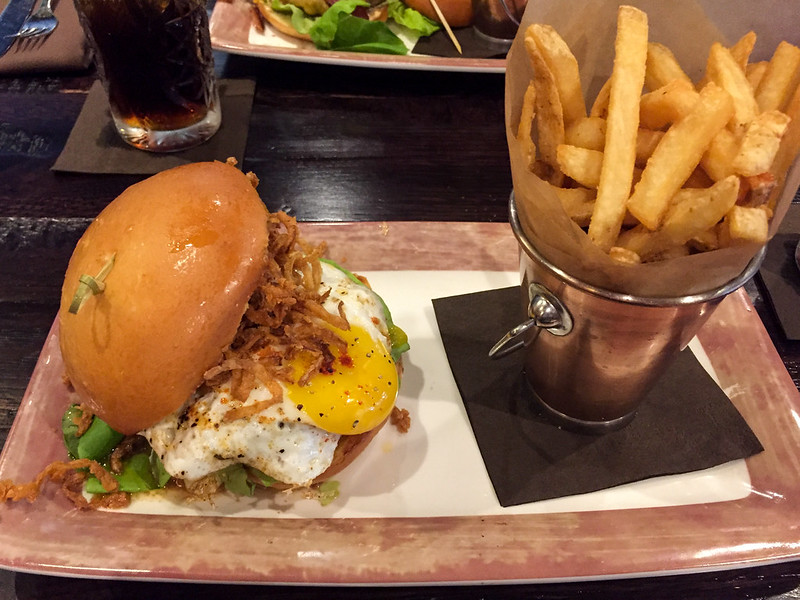 Note: There are affiliate links in this section.

Since we were spending the majority of our time in Orlando at the Universal parks and CityWalk, we decided to stay in one of Universal's on-site hotels.

We stayed at the Cabana Bay Beach Resort, partly because I really love its retro theme, and partly because it’s the most affordable of the five Universal properties (rates start at around $125 per night). Along with the retro theme of the hotel, it also has two pool areas, a Starbucks, a diner, a bowling alley, and an arcade. 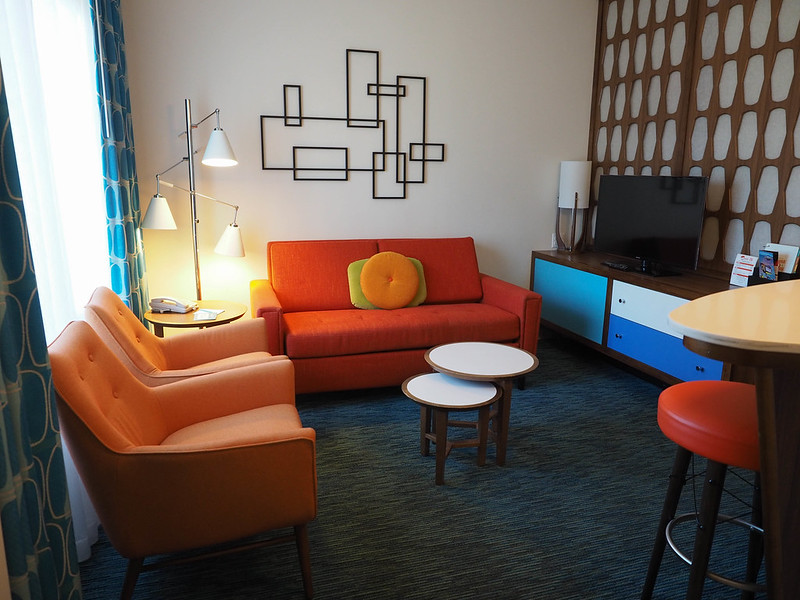 The benefit of staying at the Universal-affiliated hotel is that you can get into the parks an hour before they open to the general public (great for getting on rides before there are any lines). Cabana Bay also offers a free shuttle bus to CityWalk that runs from 7 a.m. to 2 a.m. each day.

The other Universal on-site hotels are:

Any of these make great bases for visiting both Universal parks. If you can't make up your mind, compare prices of hotels near Universal here.

(And, in case you're curious about how to get from Universal to one of the Disney parks, my advice is to just use Uber! We took an Uber from CityWalk to Epcot and then from Epcot back to our hotel, and it cost us $33 total for both rides.)

Like I mentioned before, the reason we chose to go to Orlando for our long-weekend winter getaway was because Spirit Airlines just started up new direct flights from the Akron-Canton airport to various destinations in Florida. I LOVE the Akron-Canton airport (it's so much smaller and less-stressful than its Cleveland counterpart), and I've flown Spirit in the past without any issues. 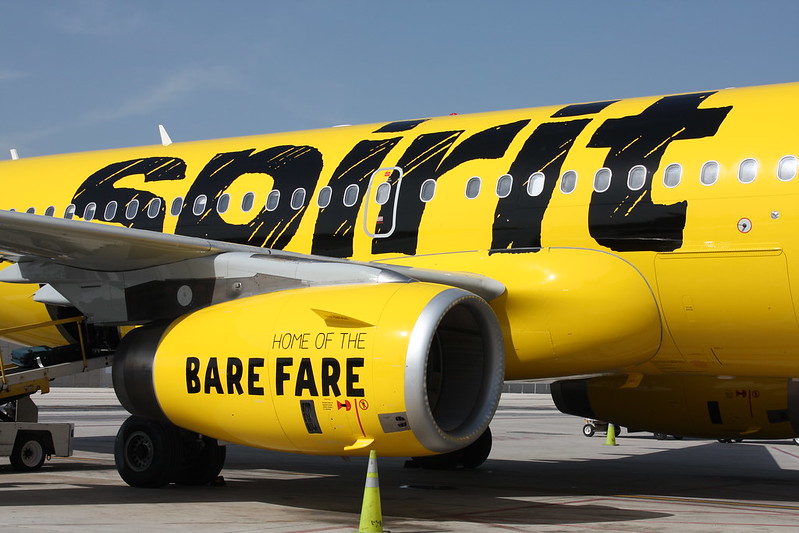 Spirit IS a budget airline (i.e. one that charges extra for things like carry-on bags and seat assignments), but as long as you know what to expect going in, you shouldn't run into major problems.

Our flights left and arrived on time, the crew was friendly, and Elliot and I even got to sit in the “Big Front Seats” on the flight home. I would absolutely book this route again to Orlando, especially considering that the “bare fare” for these flight start around $35 one-way.

(You can check out where else Spirit flies, too.)

Have you ever taken a long weekend with your significant other in a place like Orlando? 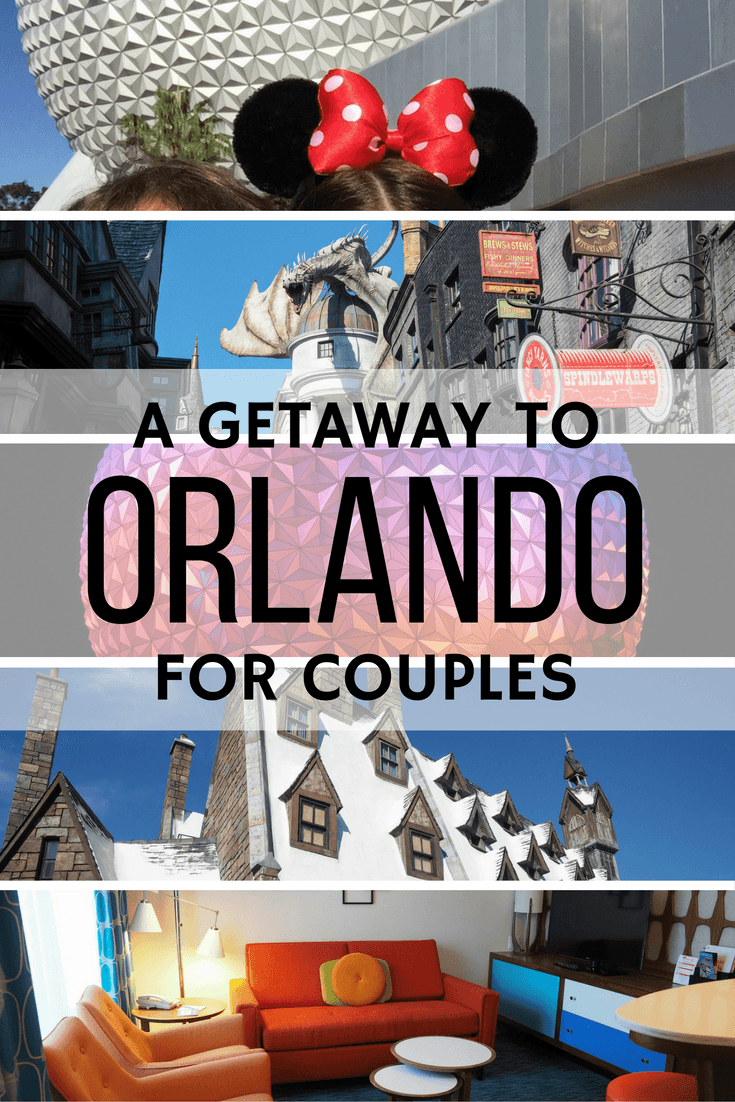 *Note: This trip was in partnership with Spirit Airlines and Universal Orlando Resort. But, as always, all opinions (and need to own Minnie Mouse ears) are 100% my own.