As I planned a long-weekend getaway to some of Orlando's most famous theme parks for the beginning of December, I really only had two things in mind:

But I didn't think about the *actual* holidays at all.

I was therefore excited to find out that my partner, Elliot, and I would be visiting Universal Orlando during the first weekend of their holiday celebrations. It was an added bonus to the warm weather and slightly shorter lines. 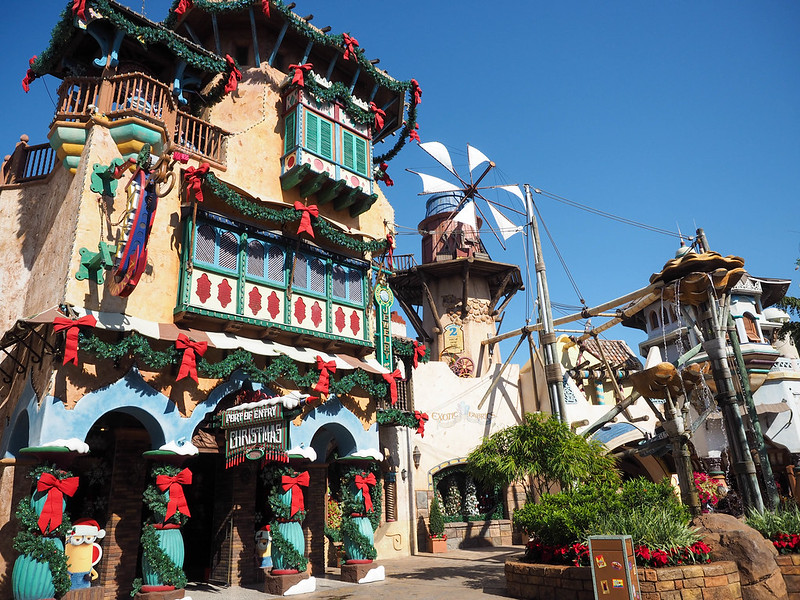 Since this was my first time at Universal around the holidays, I figured I would share with you some of the things that make visiting around this time of year really special.

3 must-see things at Universal Orlando at the holidays

Here are three things you can't miss at Universal Orlando around the holidays (updated with info for 2018). 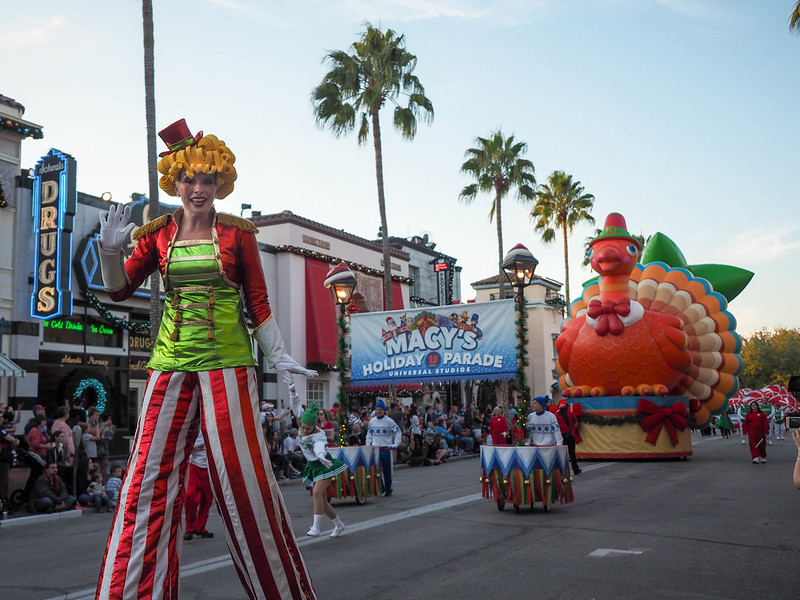 Who else watches the Macy's Thanksgiving Parade every year thinking that it might be fun to see it in person one day? Well you can get a taste of it at Universal around the holidays.

The Universal’s Holiday Parade Featuring Macy’s is a 30-minute-long parade that takes place every night from early December through New Year's at Universal Studios. The parade is made up of floats (many of which you will have seen at the Macy's Thanksgiving Day Parade in New York), marching bands, characters like the Minions, and more, and of course ends with Santa and Mrs. Claus. 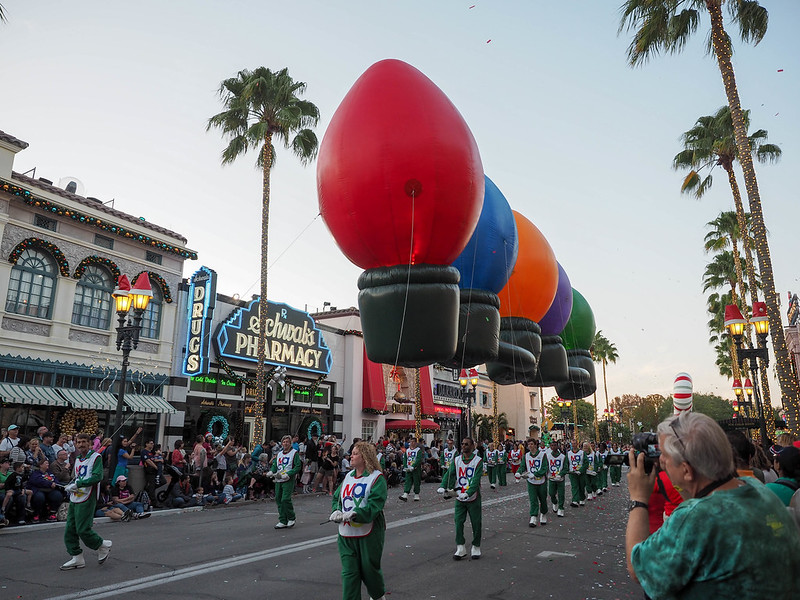 The best place to watch the Macy's Holiday Parade at Universal Studios is debatable since you can see the floats from anywhere along the parade route. I watched from just in front of the Terminator 2 3-D show, which is near the beginning of the parade in the “Hollywood” section of the park. They shoot off confetti canons here, which is pretty fun.

Another good spot to watch would be near the giant Christmas tree on the square in the “New York” section of Universal Studios. There's a confetti canon here, too, and Santa also lights up the tree as he passes.

On the day I was there, the parade was scheduled to start at 5 p.m., and people were starting to claim parade-watching spots at 3:30. I think this is a bit overkill, though, since you can see the floats from anywhere along the parade route. I would suggest picking a spot about 30 minutes before the parade is set to start. 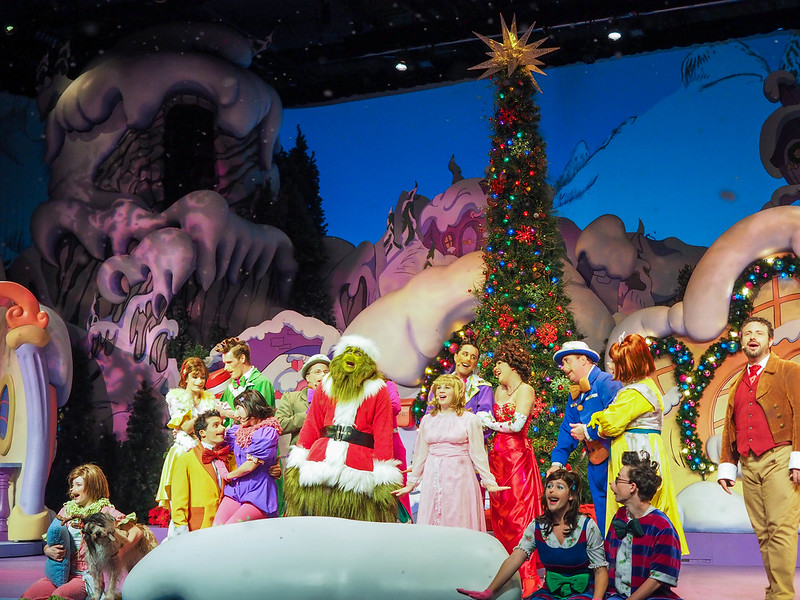 Another must-see at Universal around the holidays is the Grinchmas Who-liday Spectacular at Universal's Island of Adventure park. The show takes place multiple times per day throughout December on a soundstage at Seuss Landing – and it's fun even if you're visiting without kids.

The show (which lasts just over half an hour) is based on the 2000 Grinch movie starring Jim Carrey and has the laughs to go along with it.

I was impressed by the talent in the show, and definitely left with a smile on my face.

The soundstage can seat a lot of people for the Grinchmas Who-liday Spectacular show, but you'll still want to get in line at least 30 minutes before the performance you want to attend is set to begin (and possibly even earlier if you're in the park on a really busy day). The line can be found near the One Fish, Two Fish, Red Fish, Blue Fish ride, across from the Caro-Seuss-el.

Check for exact showtimes closer to the holidays here. 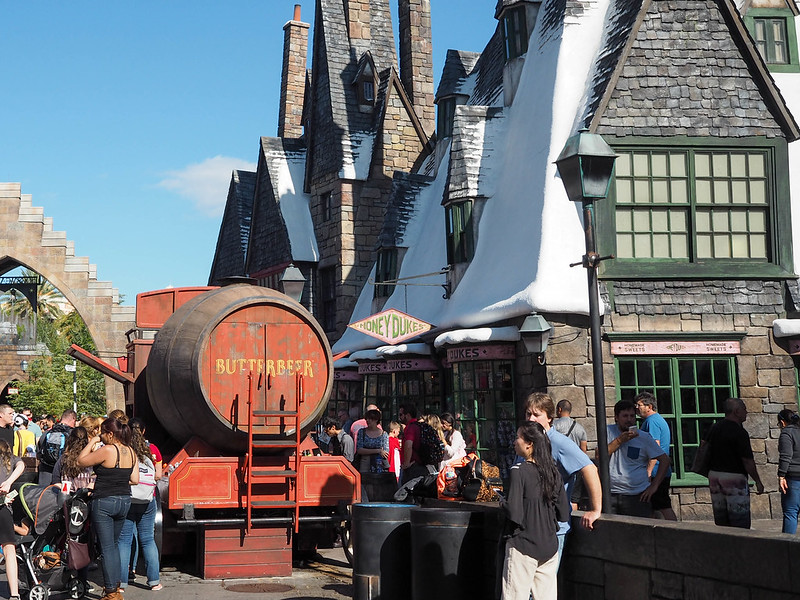 I love Universal's two Wizarding World of Harry Potter parks so much that I couldn't resist including something from one of them on this list.

You can only get the hot version of butterbeer (a sweet butterscotch-y, non-alcoholic drink) in the “cooler” months of the year, and it feels even more festive to do it in December – especially if you do it in Hogsmeade (Islands of Adventure), where the roofs are perpetually covered in faux-snow.

As of 2017, both the Hogsmeade and Diagon Alley parts of the parks get decked out for Christmas, too, with special decorations and performances. 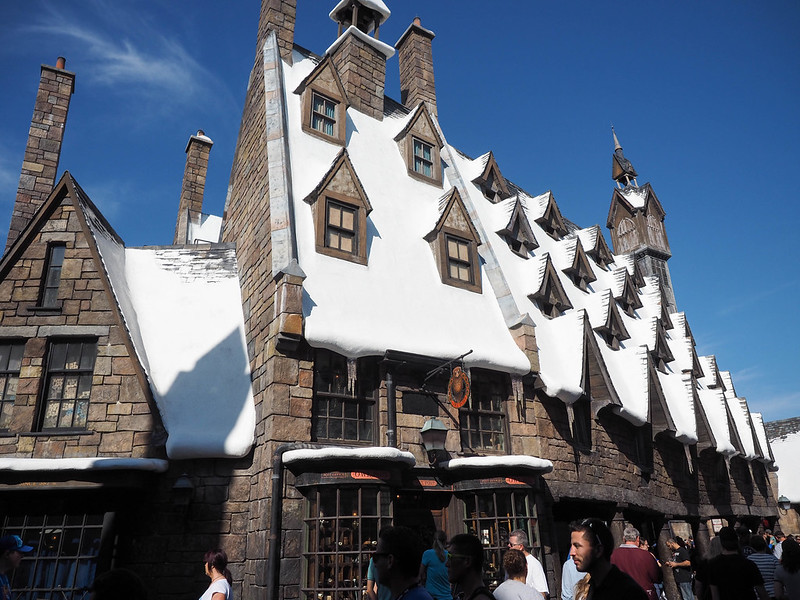 Both Harry Potter parks at Universal are extremely popular. If you want to avoid the largest crowds, go either early in the morning (well before lunchtime) or later in the evening (closer to closing time).

RELATED: 10 Things to Do at the Wizarding World of Harry Potter

Plan to stick around Hogsmeade in the evening at least once, as The Magic of Christmas at Hogwarts™ projection show happens on Hogwarts Castle at least once per night after dark.

Other holiday features to look out for

Some other holiday touches you can enjoy at Universal Orlando include:

Christmas-y decorations: At Islands of Adventure, Seuss Landing is the most done-up for the holidays, with decorated Christmas trees, wreaths, and more. You find more widespread decorations at Universal Studios, including the giant Christmas tree on the square in the New York part of the park.

Fun performances: You can catch a holiday Blues Brothers show on Delancey Street in Universal Studios, and go to a Grinch-themed character breakfast (complete with green eggs and ham) at Seuss Landing at Islands of Adventure. This year there will also be special holiday performances in both Harry Potter parks throughout the day, too.

Special souvenirs: At the entrance of Islands of Adventure (the Port of Entry), there's a shop selling Universal ornaments and other Christmas decorations. You can usually get your ornaments personalized for an extra-special souvenir. 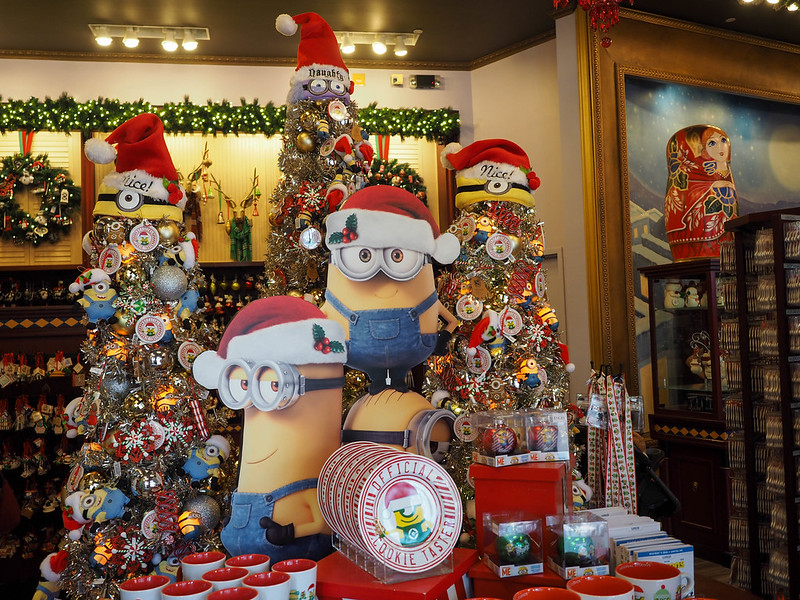 Where to stay at Universal Orlando around the holidays

Universal Orlando currently has five “on-site” hotels, with another planned to open in 2017.

The current hotels are:

Booking at any of these hotels will get you early park entry to both Universal parks (perfect to beat the lines or to wander through Diagon Alley before it's filled with people), and they all offer free transport to Universal City Walk (and the entrances to both parks), too.

My personal pick is the Cabana Bay Beach Resort because it's the most affordable of the five (rates start at around $125 per night). I like the retro theme of the hotel and the fact that it has two pool areas. It also has a Starbucks, a diner, a bowling alley, and an arcade.

And, at Christmas, Cabana Bay decks its lobby with several silver Christmas trees, which I thought was perfect. This was my second time staying at this property at Universal, and I would definitely do it again.

Would YOU want to visit Universal Orlando around the holidays? 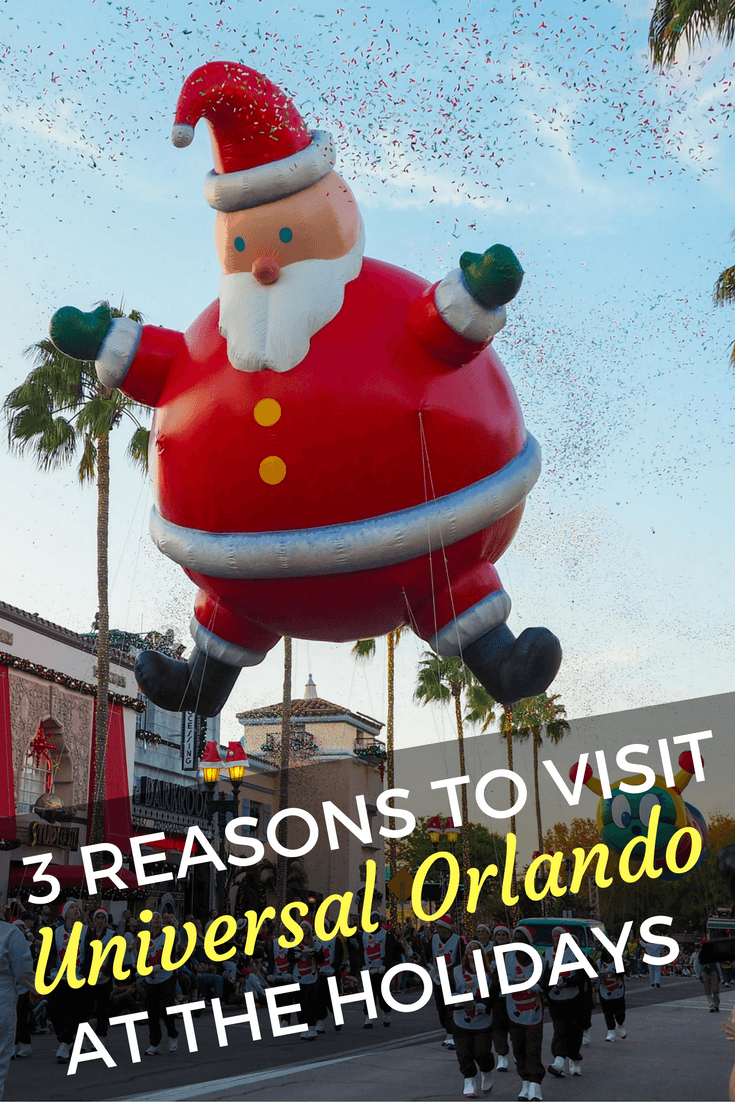 *Note: This trip was in partnership with Spirit Airlines and Universal Orlando Resort. But, as always, all opinions (and holiday photos) are 100% my own.

6 Comments on “Holidays at Universal Orlando: 3 Things You Can’t Miss”