Ever since I was a little kid, I've dreamt about traveling to Egypt.

The ancient Egypt sections of my history classes were always my favorite. I could always pinpoint where the country was on the giant map of Africa when I watched “Where in the World is Carmen Sandiego.” And I still to this day will watch “The Mummy” (the original one!) anytime it's on TV.

But Egypt has had a rough last decade.

I was working as a newspaper editor in 2011 during the Arab Spring, and was reading stories daily about uprisings and revolutions. It all started in Tunisia, but spread to multiple nations in northern Africa – including Egypt. And, for quite a few years afterwards, Egypt just didn't seem like a safe place to travel.

But if I've learned anything from traveling the world, it's that the news media makes most places sound a lot scarier than they actually are.

Many tour companies did indeed suspend operations in Egypt following the revolution; not many people were going there from 2012-2015. But things are changing. Tourism still isn't anywhere near what it was pre-2011 in Egypt, but visitors are starting to come back each year in larger and larger numbers. (And yes of course the pandemic put a halt to tourism growth in Egypt, but I think it's poised to continue growing in 2022 and beyond!)

With a trip to the Seychelles already planned and not wanting to spend so much time on a plane to just stay in the area for one week, I decide to go for it, and booked a 12-day tour of Egypt with Intrepid Travel. I knew Egypt wasn't somewhere I wanted to travel 100% solo, and I've had great experiences traveling with Intrepid in the past.

I've written separately about the tour itself, but now I want to talk a little about Egypt and the things that surprised me about traveling there. Chances are some of these will surprise you, too!

7 Things That Surprised Me About Egypt Travel

1. It's not as dangerous as you think it is

The first question people asked me when I returned from this trip was: Is it safe to travel to Egypt?

I know Egypt isn't regarded as one of the safest places to travel right now (and if you read the US State Department's past travel warnings about Egypt, you'll probably be convinced that ISIS will come for you if you step foot in the country). And it's true that terrorist groups are still active in certain parts of the country.

But the main touristy sites in Egypt are no more dangerous than popular places you might visit in the US or Europe. There's a strong military presence at most major sites in Egypt – armed guards, metal detectors, and bag checks become second nature as you visit temples and museums – but I didn't find myself feeling “in danger” at any point.

There are certain parts of Egypt that are no-gos right now, but they aren't places that most tourists would go anyway. (In fact, all tour operators in Egypt have modified many of their itineraries to ensure that they're not taking anyone to any of these places.)

I'm not saying Egypt is 100% safe because that guarantee can't be made about ANY destination in the world. But I am saying that it's safer for tourists than you probably think.

I was surprised at how at-ease I felt the entire time in Egypt. I wasn't even concerned about pickpockets in most places, which can't be said about every country I've visited!

2. The kids especially are incredibly friendly

I expected to get some extra attention as a white, non-Muslim woman traveling in Egypt. But what I didn't expect was that I would become an instant celebrity every time I walked outside!

At many major sites (especially in Cairo and Alexandria), me and my tour mates were constantly being approached by young Egyptians (and occasionally older ones!) asking us for selfies.

I was confused by this at first (“we don't look THAT different!” I kept saying), but our guide explained that it's a cool badge of honor right now in Egypt to take a photo with a tourist. Tourism numbers have been so low in Egypt in the past few years that people are excited to see more visitors now.

Once I learned this, I started asking for selfies back in return!

I knew Cairo was a big, bustling city. But what I didn't really realize before I got there was that the city of 19.5 million is essentially chaos incarnate.

Traffic is INSANE. No one uses the painted lanes on the roads. Horns are constantly honking. People jump in and out of old VW buses in the middle of the road. And that road is being shared by everything from cars to buses to donkey carts.

Adding to the chaos is all the dust/sand (Egypt is essentially a big desert, after all) and the smog. I visited Egypt at the beginning of winter, and most mornings began with a thick, murky fog spread out over Cairo.

This is something to keep in mind if you're planning to visit the Pyramids in Giza, because it means that there's a chance you may have to plan your visit around the visibility – on some days you can't see the pyramids at all!

4. The food in Egypt is unique and tasty

You'll find a lot of traditionally Middle-Eastern foods in Egypt (like falafel and shawarma and kofta), and also some Moroccan dishes like tagine. But Egypt's take is always a little unique – I noticed a lot of cinnamon in many dishes I tried!

If you're looking to try a unique Egyptian dish, go for a bowl of Kushari (or Koshary). It's a mixture of rice, pasta, lentils, and chickpeas, topped with onion and a tomato sauce. It's known as the national dish of Egypt, and can be had extremely cheaply (think less than $1 USD for a bowl).

Other things you can try in Egypt include camel and stuffed pigeon – it's common here to raise pigeons for meat like you would chickens.

5. Tipping is expected – for everything

Sorry all my non-American friends, but you're going to have to get used to tipping for everything when you travel in Egypt. Often referred to as “baksheesh,” you'll be asked to tip for everything from a porter bringing your bag to your hotel room to someone handing you a paper towel in the bathroom.

In some instances you won't be given a choice (for example, don't expect to use the toilet – even at the airport – without paying at least 2 or 3 Egyptian pounds), while in other cases a tip won't be explicitly asked for but will still be expected.

It does get a bit annoying being constantly asked for money, but remind yourself that the amounts are incredibly small (5 Egyptian pounds is only 30 cents USD) and that many people in Egypt don't make a living wage.

My advice is to always have some small Egyptian bills or coins on your person, or come prepared with fresh $1 bills from home.

6. All the ancient sites are 10x better in real life

The constant need to tip is more than made up for by the fact that all the ancient sites you'll visit in Egypt – all the tombs and temples and ruins – are 10 times better in person than they are in any photos or documentaries you've seen.

Seriously. Egypt's history is incredible, and so much of it has been preserved!

THIS is why you travel to Egypt.

You'll see temples that are thousands of years old that still have paint on them; mummies of pharaohs that you read about in history books; tombs with walls that look like they were carved just yesterday.

If you've put off visiting Egypt, don't put it off any longer. Its treasures are even more impressive in person.

7. Egypt is so much better with a guide

Lastly, I think Egypt is definitely a place to visit with a local guide. I know many people prefer to travel independently, but this is a country where you get a lot more out of the experience when you have someone with you who is knowledgable about the history, the religion, and the present-day culture of the country.

Like I mentioned before, I booked an Egypt tour with Intrepid Travel (this one, in case you're interested), who always employ local guides as their tour leaders.

Our tour leader was a local from Alexandria who's studied not only Egyptology but also various languages. He could read hieroglyphics, tell us all the best places to eat, organize extra side trips people wanted to take, and let us know how not to get ripped off when buying souvenirs.

Plus, it was great to be able to talk to someone who's lived his whole life in Egypt and has such a passion for showing his country to other people.

If you're unsure about traveling to Egypt, definitely go on a tour. (Read my full review here.)

These are the two tours I recommend:

Or you can combine Egypt and Jordan in this 15-day trip.

One thing that didn't surprise me about traveling in Egypt

It's not the Western world

Even though many Western tourists visit Egypt, it's important to remember that Egypt is not a Western country. Egypt is both part of the Middle-East and North Africa, too, and our guide kept reminding us “we're not a first-world country here, guys.“

So what does this mean as far as traveling? Well, expect that “5-star” accommodations in Egypt won't be like 5-star accommodations in Europe. Things will be done at a slower pace. You WILL be confronted with poverty, garbage on the streets, and sometimes animal neglect (definitely think twice before riding a camel or using a horse carriage).

You can also expect to be hassled by vendors at all the major tourist sites. You often have to say no and just keep walking – but know that they'll follow you for a while anyway trying to sell you that scarf or hat or scarab carving.

But I'm not telling you any of this to scare you off! I just think it's important to go in with appropriate expectations. You can't travel to Egypt expecting it to be just like a trip to Germany or Australia – but that's kind of half the fun!

Egypt is unlike anywhere else I've traveled thus far, and I'm so glad I went.

READ NEXT: Can I Wear Capris in Egypt? (A Complete Egypt Packing Guide for Women)

What do you think? Is Egypt somewhere you'd like to travel? 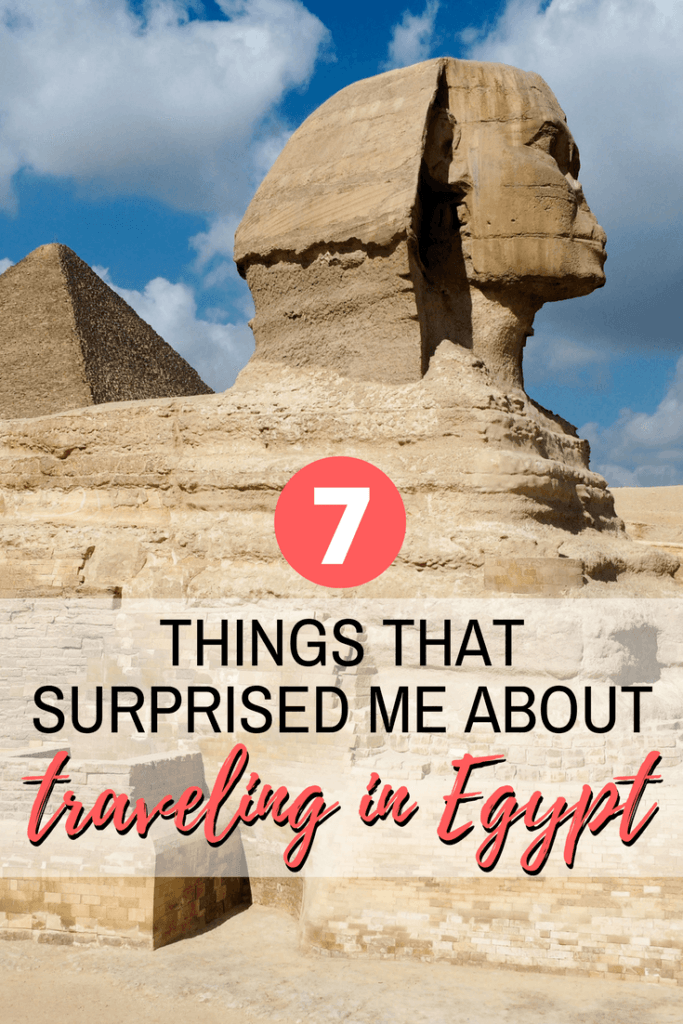 Toilet paper to-go - because you'll need it in Egypt!