As a really nerdy kid who loved history and books and things like mythology, I'm not sure there was ever a time when visiting Egypt wasn't on my travel bucket list. I wanted to see the tombs of the pharaohs and the ancient temples and the mighty Nile River. I wanted to visit the Pyramids and see all those exotic-sounding cities that I learned about in history class.

And I definitely am not alone. Prior to the Arab Spring and string of revolutions that rocked northern Africa beginning in 2011, Egypt was a hugely popular tourist destination. Everyone wanted that photo at the pyramids and to see King Tut's tomb and to sail on a felucca on the Nile.

Pre-2011, Egypt was seeing upwards of 12 million tourists per year. Post-revolution, however, tourist numbers in the country plummeted; at its lowest point, Egypt was getting less than 1 million visitors per year.

Thankfully, things have finally started to improve in Egypt. While there are still parts of the country that aren't safe for tourists, the vast majority of it (and definitely the major tourist sites) is safe and open for business.

So when I was debating over which destination in Africa to pair up with a trip to the Seychelles*, my attention immediately went to Egypt.

(*Note: I traveled to Egypt in late 2017, but this post has been updated with current info since then!)

Should you book a tour in Egypt?

Once I decided that I wanted to go to Egypt, I began shopping around for group tours in the country. This isn't necessarily because I was afraid to visit Egypt on my own, but more about the fact that I knew I would feel more comfortable in a small group and with a local guide.

This would be my first real trip to the Middle East, and I wanted to give myself the best chance of having a positive experience there. I've traveled with small groups all around the world and knew Egypt would be an ideal place to book a tour like this.

You don't *have* to book a tour in Egypt (plenty of people travel there independently), but after going, it IS a place that I'd recommend exploring with a guide in order to get the most out of your experience.

The Egypt tour I chose

I settled on the 12-day Egypt Experience tour with Intrepid Travel, a company that I'd traveled with 6 times previously. This is a “Comfort” trip with Intrepid, meaning it was going to be a little more comfortable and a little more expensive – but at $2200-$2500 per person, I still think it's pretty affordable for a 12-day trip.

(If you want a more budget-friendly trip in Egypt, Intrepid also offers an 8-day Egypt Adventure trip, which is about half the price of the trip I went on.)

Before you go to Egypt

You most likely will need a visa for Egypt, but if you're from the US, Europe/UK, Australia, or Canada (as well as several other nations), you can get your visa when you arrive in Egypt. A visa costs $25 USD and is valid for 30 days. When booking this tour with Intrepid Travel, a representative will meet you when you arrive in Egypt and help you obtain your visa, which is a nice bonus.

Intrepid Travel does require you to have travel insurance for the entirety of your trip in Egypt. You may be covered under your regular insurance plan, but if you're not, I recommend buying coverage through World Nomads. They offer the most affordable basic travel insurance out there.

And if you're wondering what to pack, you can check out my Egypt packing guide!

What will you do on this tour?

This Egypt Experience tour is absolutely jam-packed with amazing ancient sites and experiences. It hits all the highlights of Egypt and then some.

Cities you'll visit on this tour include Cairo, Alexandria, Aswan, and Luxor, and the following sites/experiences are also included:

Our guide, Ahmed, was also really intent on making sure that people saw as much as they wanted to. He was always happy to arrange extra outings for us, and usually came along to act as a guide.

Some of the optional extras that a few of us added included:

There is SO much to do and see in Egypt, and this Intrepid tour really ensures that you see a ton of it.

I've now traveled with Intrepid on more than half a dozen trips, and the group make-up is always pretty similar. Ages in my group on this trip ranged from mid-20s to mid-60s, with people hailing from Australia, the US, Canada, Scotland, and Switzerland.

Intrepid travelers tend to be fairly well-traveled and open-minded, which is one of the reasons I think I keep traveling with them again and again!

As always when traveling with Intrepid, our group was small – there were only 12 of us (the max on this tour when I took it was 16, but is now down to just 12!). And half of the people in my group were solo travelers like me!

Intrepid always hires local trip leaders who live in (and in most cases have grown up in) the country you're visiting. Our guide was Ahmed, an Alexandria native who has been guiding tours in Egypt for years.

Ahmed was funny and friendly, but also super knowledgable and super passionate about Egypt. He could read hieroglyphics, knew all the lineages of the pharaohs, and recommended the best places in each city to get falafel (and also, you know, made sure we all got where we needed to be safely).

I think the biggest benefit of traveling in a small group is having a guide; you end up seeing and learning so much more than you would on your own. And Ahmed was one of the best guides I've ever had on a tour!

As far as transport goes, this tour was quite varied!

We traveled in a private mini bus in every city, spent one night on the train between Cairo and Aswan, and flew between Aswan and Abu Simbel and also from Luxor back to Cairo (though that specific journey is now done by bus instead of plane). Our tour also included traveling on a cruise ship up the Nile for 3 nights.

The thing you should know about traveling in Egypt is that the traffic is INSANE. In Cairo especially, it will take forever to drive most places and nobody uses the lanes on the road – it's just mass chaos!

This is a “comfort” trip, but be aware that “5-star” in Egypt doesn't really equate to 5-star in other parts of the world.

The hotels we stayed in often had opulent lobbies and amenities, but most rooms were fairly basic and usually a bit dated. The overnight train to Aswan is similarly not *that* fancy, but perfectly fine. And the cruise ship we sailed on was nice enough, but if you've been on “luxury” river cruise ships anywhere else in the world, this one really won't compare.

If you're traveling solo, you'll be paired up with another solo traveler (of the same gender) as a roommate, unless you pay the single supplement fee.

At the end of the day, though, this trip is all about the sites and not really about where you sleep at night.

How is this tour different?

One of the reasons I keep traveling with Intrepid Travel is because I really like the company as a whole. They are dedicated to responsible and sustainable tourism (they were the first major tour operator to stop including elephant rides in their itineraries), which I am happy to support.

On this Egypt tour in particular, we skipped what used to be an included visit to Edfu Temple as we sailed down the Nile because the only way to reach the temple is by horse carriage – and in Egypt, most people don't treat their working animals very nicely. The fact that Intrepid cares enough about animal welfare to remove the temple visit from the itinerary says a lot.

Instead of visiting Edfu Temple, you now get a ticket to go into King Tutankhamen's tomb instead (which is actually a way more valuable thing to have included!). And my group also visited Animal Care in Egypt, an Intrepid Foundation project that offers free animal care in Luxor as well as educational programs for local kids about animal welfare.

No country is completely safe, but Egypt is not as dangerous as the media might make you believe, either.

The main touristy sites in Egypt are no more dangerous than popular places you might visit in the US or Europe. There's a strong military presence at most major sites in Egypt (armed guards, metal detectors, and bag checks become second nature as you visit temples and museums) but I didn't find myself feeling “in danger” at any point during my trip to Egypt.

I actually think safety is another good argument for traveling to Egypt on a tour. Having a local guide to look out for us (as well as fellow travelers to hang out with) made me feel much more comfortable overall in Egypt.

RELATED: 7 Things That Surprised Me About Traveling in Egypt

Would you recommend it?

Absolutely, 100 times YES – both this Intrepid Travel tour specifically and Egypt in general. I loved geeking out over all the ancient sites, and really felt safe and comfortable during the entire tour.

I also think that right now is an excellent time to visit Egypt. Tourism is beginning to rebound in the country, but it's still nowhere near the overwhelming levels that it was back in 2010 and earlier.

The price: The tour price averages around $2300 per person, depending on departure date.

The best time of year to go: Egypt gets ridiculously HOT during the summer months, so I highly recommend visiting as close to winter as you can. I went in late November/early December, and temperatures averaged around 60 F in Cairo, and close to 80 F further south in Aswan and Luxor.

What to pack: Read my Egypt packing guide here.

Would you travel to Egypt on a tour? 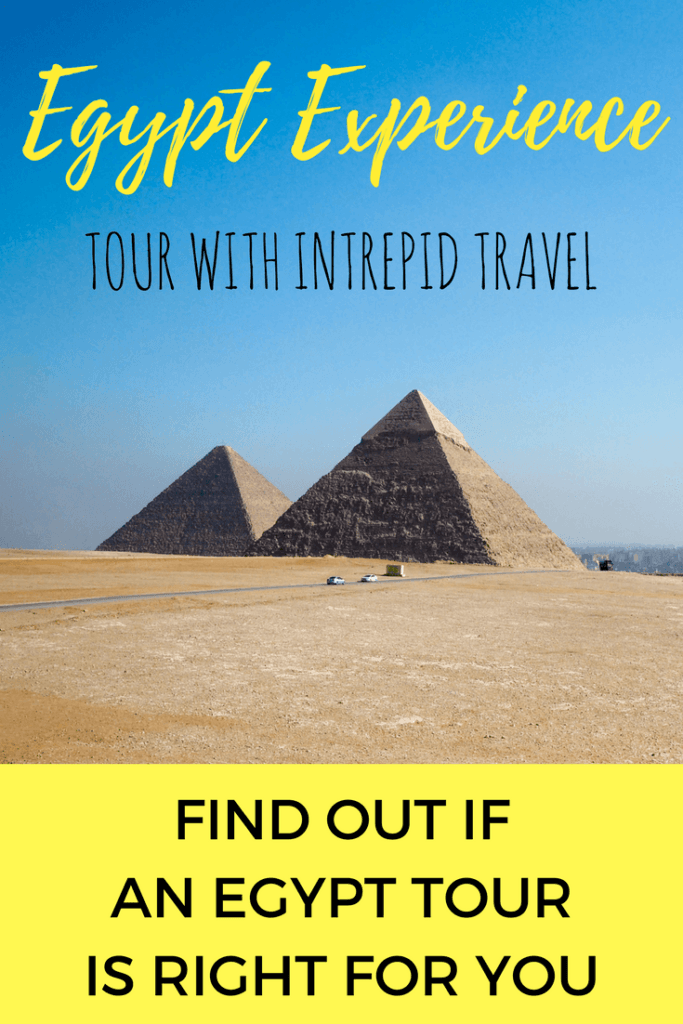