Unique and Beautiful Cemeteries Around the World

Home » Travel Photos » Unique and Beautiful Cemeteries Around the World

Just in time for Halloween, I've decided to put together a round-up of some of my favorite cemeteries I've visited around the world.

I'm one of those people who loves visiting cemeteries when I travel. It's not because I have some morbid obsession with death, though. I simply find cemeteries to be interesting – and very often beautiful.

Most cemeteries are built to be completely utilitarian; they are groomed and organized and there to serve just one purpose. But other cemeteries are more than just a place to bury the dead.

Here's a look at some of the most interesting, beautiful, and haunting cemeteries I've visited around the world.

8 Unique Cemeteries to Visit Around the World

This colorful and unique cemetery in Romania is one of my absolute favorites. Each grave marker is a colorful cross with a short poem or story about the deceased written on it, along with an illustration of the person, often depicted doing something they enjoyed in life.

Instead of mourning death, Merry Cemetery celebrates life – making it one of the coolest (and happiest!) cemeteries I've ever been to.

Located in Savannah, Georgia, in the heart of the Old South, Bonaventure Cemetery is probably the most beautiful cemetery I've visited. With weathered statues of crying angels, oak trees draped in Spanish moss, and some very old family plots, this is a cemetery you should definitely visit if you ever have the chance.

This cemetery has a ghost story or two connected to it, but it's a beautiful and peaceful place to visit – during the day, at least.

If it's haunting, unkempt, yet sadly beautiful cemeteries you're looking for, I would recommend either the Jewish Cemetery in Warsaw, or its twin in Krakow. Both are overgrown and crumbling, but yet still stunning in their disrepair.

For me, knowing how much Poland's Jewish population suffered during WWII made these cemeteries even more moving, and I spent a lot of time wandering through them.

When the RMS Titanic sank in the Atlantic in 1912, rescue ships from Halifax, Nova Scotia, were the first on the scene – and the ones responsible for the recovery of the bodies of those who did not make it.

Many of those who died were either unidentifiable, or their families could not afford to have their bodies shipped back home. Hundreds of Titanic victims, therefore, were buried in cemeteries in Halifax.

The most famous “Titanic cemetery” in Halifax is Fairview Cemetery, where 121 victims are buried – including the famous J. Dawson.

While researching for his cinematic masterpiece, James Cameron visited this cemetery as part of his research. Many of the real stories of these people are told in the film (though Jack Dawson as played by Leo was completely made up, save his last name and first initial).

When I was asking friends and acquaintances for Paris recommendations, many of them suggested a visit to the city's sprawling Père Lachaise Cemetery. It was a great suggestion that I now pass on to others.

The cemetery is massive, yet well-kept. There are “street names,” as well as the gravesites of some very famous people – like musician Jim Morrison, playwright Molière, composer Chopin, and writer Oscar Wilde.

This is a beautiful and tranquil (and free!) place to go for a wander in Paris.

When it comes to unique things to do in New Orleans, going on a cemetery tour should definitely be on your to-do list.

You might notice that this cemetery looks a little bit like Père Lachaise listed above (if perhaps a bit more unkempt), which isn't surprising considering the strong French influence in New Orleans.

Going on a cemetery tour in NOLA is definitely worth it.

I was surprised by how pretty and detailed it was. And interesting, too. Plots here are rented, not bought – meaning if you don't pay rent on a loved one's body, they are dug up and removed, and the plot is rented to someone else.

The last site I'm going to include here is perhaps one of the saddest: Culloden Battlefield in the Scottish Highlands. It was on this spot in April of 1746 that the British defeated the Jacobite army supporting the claim of Bonnie Prince Charlie to the throne of Scotland and Britain. The battle was fast and bloody – and it changed the course of history in Scotland forever.

Many of the Highland clans were nearly wiped out during the battle, and the Highland way of life (including the wearing of tartan, the speaking of Gaelic, and the clans themselves) was all but stamped out in the decades that followed.

At the battlefield itself, many of the clan members who died at Culloden (and there were hundreds of them) are buried in mass graves marked by clan stones. It's a very somber place to visit, but fascinating from a historical perspective.

This is now a popular spot for fans of the TV show Outlander to visit since it's an Outlander filming location, but it's first and foremost a real historic site.

Want to read even more about my cemetery travels? Here are a few more posts you can read:

Do YOU visit cemeteries when you travel? Tell me about your favorite! 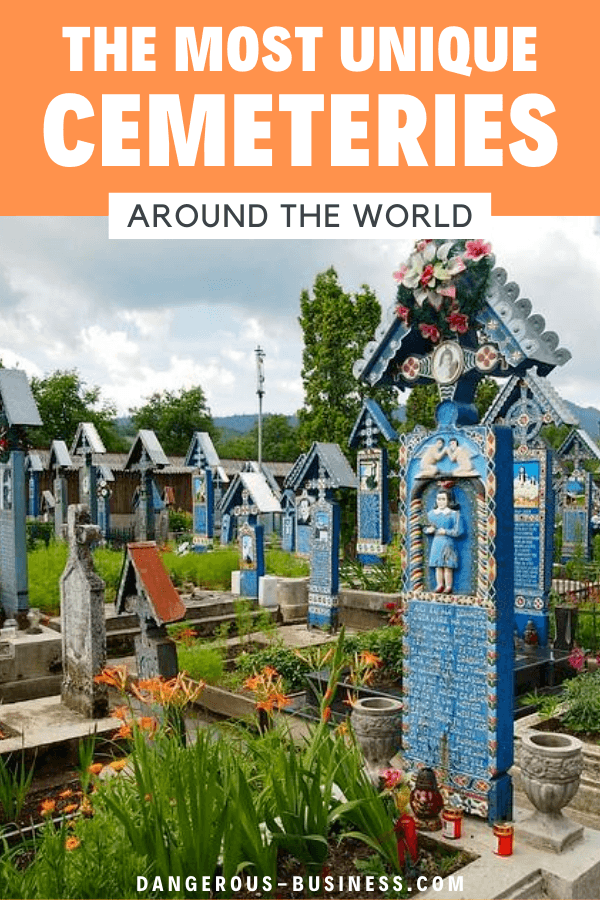 38 Comments on “Unique and Beautiful Cemeteries Around the World”