How to Spend 24 Hours in Asheville, North Carolina

Without really consciously planning it this way, 2018 ended up being “the year of The South” for me.

I always make it a point to travel a bit in the US every year, simply because it's huge and diverse and there are so many parts of it I have yet to see. And for my US-based explorations in 2018, I visited mostly Southern cities. There was a girls trip to New Orleans in the late spring, visits to Memphis and Nashville in the summer, and then a jaunt down to Asheville, North Carolina, in early September.

I admit that I didn't know a whole lot about Asheville before visiting. I knew it was up in the Blue Ridge Mountains, and I had heard it was emerging as a cool, funky foodie city. But I didn't know much else and went to Asheville with basically no expectations – which is often the best way to visit a new city.

Since my long weekend trip to Asheville, I've done some reading up on the city. It's definitely an up-and-comer in the South, but already has a lot of devoted fans. In early 2018, Asheville made it onto several “South's Best” lists, which are decided by readers of Southern Living.

Some of the lists Asheville made it onto included “The South's Prettiest Cities,” “The South’s Best Food Cities,” and also the overall list of “The South's Best Cities.” It also topped Lonely Planet's “Best in the US” list for 2017.

Not too shabby for a city with a population of less than 100,000 people.

So why visit Asheville in the first place? Well, even if you weren't aware of all its accolades, it's still a pretty cool city with some unique draws.

Things to do with one day in downtown Asheville

Asheville is perfectly sized for a weekend getaway. The downtown area is small enough to be explored on-foot, and all the other main attractions are within easy driving distance.

And yes, you can see most of the highlights in downtown Asheville in just one day.

With 24 hours in Asheville, here's how I would spend my day:

1. Breakfast at Over Easy Cafe

Sure, you could grab breakfast at your hotel, but if you're only in Asheville for a short time, you may as well do things right. Head over to the Over Easy Cafe on Broadway, which serves up comfort food in a casual setting. They're open 7 days a week from 8 a.m. to 2 p.m. but do not take reservations – so get there early if visiting on a weekend!

Downtown Asheville isn't huge, but this city packs so much punch into its downtown area. You'll find everything from fabulous farm-to-table restaurants to independent shops to cool galleries and museums.

You'll also find some interesting architecture styles downtown, including some beautiful Art Deco buildings. Asheville was a boom town in the early 1900s, but was hit extremely hard by the Great Depression. The city decided, though, that it would pay all of its debts back – which meant that downtown Asheville was suspended in the 1920s for decades, with none of the old buildings being torn down and replaced mid-century simply because the city couldn't afford it.

One of those old historic buildings that survived is the Grove Arcade. It dates back to 1929, and today is home to unique restaurants and shops, most of which sell things made in North Carolina.

My favorite spot in the arcade was the Battery Park Book Exchange & Champagne Bar, which is one of the coziest book shops I've ever visited!

There's no shortage of cool places to shop downtown, either – there are more than 200 locally-owned stores and dozens of galleries! Along with the Grove Arcade, you can also hit up trendy shops on Wall Street, and see work by regional artists and craftspeople at Kress Emporium.

And if you like art, definitely check out Woolworth Walk, a cool gallery and emporium located in the fully-restored downtown Woolworth building.

Once you've had enough shopping, head over to Tupelo Honey Cafe on College Street. This spot serves up “Southern comfort food with a creative twist,” and is consistently ranked one of the top places to eat in Asheville. They serve up an all-day breakfast menu, as well as Southern favorites like fried green tomatoes, shrimp and grits, and even catfish.

Tupelo Honey Cafe is a popular restaurant, and they DO take reservations – but I went later in the afternoon one day and didn't have to wait for a table.

To be fair, the River Arts District isn't in downtown Asheville. But it's such a cool part of town that I'm including it here anyway.

The area where the River Arts District sits today (along the edge of the French Broad River to the west of downtown Asheville) used to be an abandoned industrial area, left over from Asheville's booming railroad days. In the 1970s and '80s, the empty warehouses and industrial buildings slowly began being bought up and transformed into studios.

Today, the River Arts District is brimming with art studios, workshops, and galleries in 23 different buildings spread out over a mile along the French Broad River.

5a. Visit a brewery

If you're a big art fan, you could easily spend an entire day exploring the River Arts District. But I have one more suggestion for this afternoon, and that's to visit at least one of Asheville's famous craft breweries.

Like I mentioned earlier, Asheville is “Beer City USA,” and is home to dozens of craft breweries.

If you want to stay in the River Arts District, check out one of the two Wedge Brewing Company locations: Wedge at Wedge Studios or Wedge at Foundation. Both are located in old warehouse buildings, serve up unique small batch beers that you won't find anywhere else (since Wedge is not a distribution brewery), and have food trucks on-site during most lunch and dinner hours.

5b. Cocktails at the Grove Park Inn

If breweries aren't your thing (hey, beer isn't really MY thing), another great pre-dinner option would be to head north of downtown Asheville to the Omni Grove Park Inn.

This luxurious mountain resort is visually striking with its Arts and Crafts architectural style and massive stone fireplaces. It's also historically important (it's listed on the National Register of Historic Places) and is known for its various famous guests, which have included several US Presidents, Thomas Edison, Helen Keller, and F. Scott Fitzgerald, just to name a few.

You may not have time for a spa treatment or round of golf here, but you can certainly grab a cocktail and watch the sun set – in fact, the hotel is known for this and literally has a designated Sunset Cocktail Terrace.

6. Dinner at an Asheville favorite

Where you should go for dinner will depend on where you decided to go for some drinks.

If you stayed in the River Arts District or headed to South Slope for a brewery visit, then I'd recommend going to Buxton Hall Barbecue for dinner. This BBQ spot in South Slope is run by James Beard Nominee Elliott Moss, and serves up true Carolina barbecue in an airy space with an open kitchen. They smoke whole hogs, and I swear their pulled pork was some of the best I've ever eaten!

If you'd prefer to head back downtown for dinner, I recommend Cúrate, a Spanish tapas join run by another James Beard-nominated chef, Katie Button. Whereas Buxton Hall is casual, Cúrate is hip and trendy – and you'll definitely need to make reservations well in advance if you want to have dinner here.

After dinner, why not round out the night with dessert? Located just around the corner from Cúrate, the French Broad Chocolate Lounge is a great place to grab dessert to either eat-in or to take back to your hotel room.

What I love about this spot is that everything inside (from the truffles to the brownies to the tasty drinking chocolates) is made right in Asheville at the French Broad Chocolate Factory. You can also pair your sweet treat with a glass of wine or an espresso.

Where to stay in Asheville

For those wanting to stay in downtown Asheville, here are my top hotel picks:

For those wanting to save a bit of money by staying in one of Asheville's outer neighborhoods, consider:

And if bed and breakfasts are more your speed, Asheville has some historic neighborhoods with beautifully restored homes:

How to get around Asheville

While downtown Asheville is mostly walkable and there are ride share services like Uber and Lyft available, you really need to have a car to truly explore Asheville and beyond.

(Though I will say that I was able to see a lot without driving by booking a ticket for the hop-on, hop-off Asheville Trolley Tour. The fully narrated tour drives through downtown and the Montford Historic District, and makes stops at places like the Omni Grove Park Inn, the Grove Arcade, the River Arts District, Biltmore Village, and more.)

What to do with more time in Asheville

I definitely recommend spending more than just one day in Asheville! In fact, you could probably spend a whole week here and still have plenty of things to do.

You can't visit Asheville and not tour the lavish “country home” of the Vanderbilts. This “house” looks more like a French-style chateau, and you can easily spend hours exploring it and its gardens. I highly recommend the audio tour of the inside of the house, as well as one of the guided specialty tours (I did the Rooftop Tour, which was really cool!).

After the house tour, you can explore the gardens, visit and shop at Antler Village, and then wander around Biltmore Village (which George Vanderbilt created so his staff would have a place to live).

RELATED: How to Make the Most of Your Visit to the Biltmore Estate

Asheville is only a couple miles from the Blue Ridge Parkway, a scenic highway that stretches more than 460 miles from Shenandoah National Park to Great Smoky Mountains National Park.

When I was visiting Asheville, I hopped on the Blue Ridge Parkway for just one day, exploring the sites closest to the city. Close to Asheville you can find plenty of viewpoints and short hiking trails, a Folk Art Center, as well as Mt. Mitchell State Park, which is home to the highest peak in the eastern United States.

If you can dedicate a full day to the Blue Ridge Parkway while you're in Asheville, I don't think you'll regret it.

Have you ever been to Asheville? If not, is it a city you'd like to visit? 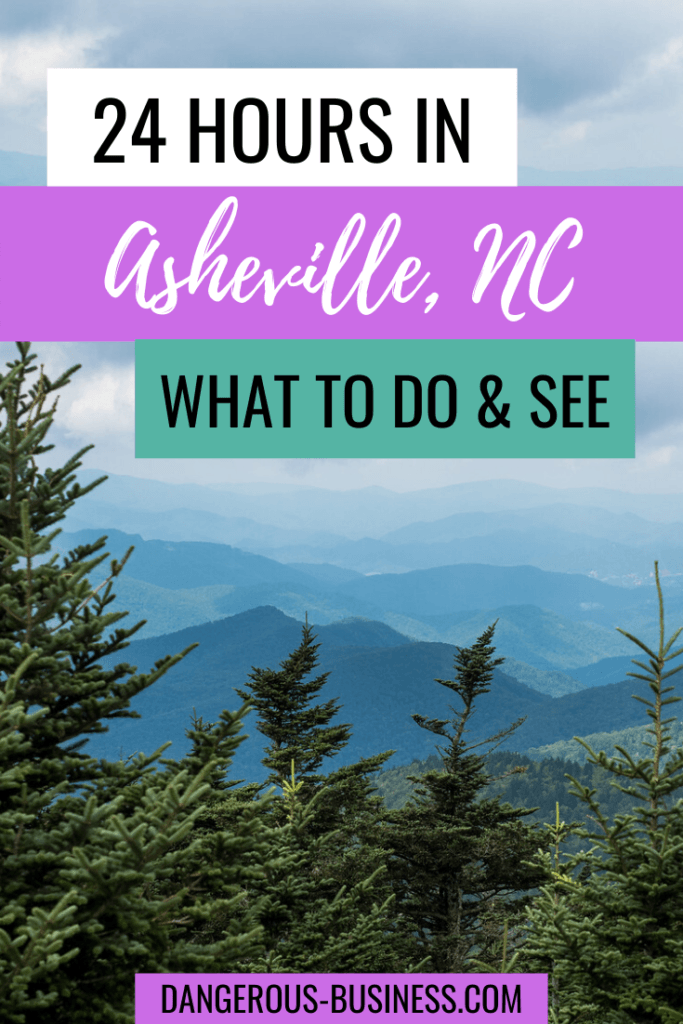 20 Comments on “How to Spend 24 Hours in Asheville, North Carolina”