I've been to New Zealand multiple times now, and yet I'm still constantly learning new things about it. Even though the country may not be as “exotic” as other destinations around the world, it still has characteristics and quirks that many people may not be aware of.

Sure, you probably know that Kiwis (AKA New Zealanders) drive on the left, love rugby, and have a lot of beautiful scenery to look at. But do you also know they were the first to give women the right to vote, or that the country only has one native mammal? I didn't.

So, allow me to shed some light on some things you may not know about New Zealand.

1. There are no snakes

Much like Hawaii, New Zealand is an island grouping devoid of native snakes. It also has no deadly spiders, killer jellyfish, or other creepy crawlies that are likely to kill you. Australia is home to all of those.

(Edit: New Zealand does have a couple venomous spiders – only one of which is native – but it's very rare to see or be bitten by one.)

2. New Zealand has only one native mammal

Before settlers began arriving, the country had only one mammal – a bat the size of your thumb. Most of the country's native fauna come in the form of birds, and many of the native bird species in New Zealand are flightless (like the kiwi, takahe, weka, and kakapo) because there were, historically, no large land predators to endanger them.

When Europeans arrived, however, they brought with them invasive species like possums, stoats and rabbits that threatened a lot of the native birds (which is why many of them are now endangered).

There are roughly a little over 4 million people in New Zealand, and about 30 million sheep. You'll find sheep farms all over the country, including huge sheep stations (where they farm thousands of sheep) on the South Island.

Because of the large number of sheep, you can find lamb and mutton on just about any menu in New Zealand – including the one at Subway.

The number of sheep in New Zealand has actually dropped, though. Dairy farming is on the rise (in fact, New Zealand is the world’s largest exporter of dairy products!), and New Zealand also farms deer for meat (NZ venison is delicious!).

Yes, the first man to summit Mount Everest was a Kiwi. Quite fitting, isn't it, considering New Zealand's claim of being the “adventure capital of the world”? Hillary is even on the NZ $5 bill.

5. A country of firsts

My favorite “first” from New Zealand is the fact that the country was the first to give women the right to vote in 1893. Kate Sheppard, the country's most famous suffragette, is now on the NZ $10 bank note.

Another fun “first”? The town of Gisborne on New Zealand's east coast is said to be the first city to see sunrise each day!

While English is the predominant language spoken in New Zealand, Maori is also an official language, in honor of the native people that originally inhabited the islands.

When looking at the numbers, only about 3 percent of the population actually speaks Maori, but the two languages can be found everywhere. Most place names in New Zealand have both a Maori and an English name, with many of them going by just the Maori name. (The Maori name for New Zealand, by the way, is Aotearoa, which means “the land of the long white cloud.”)

And, as of 2006, NZ Sign Language is the country's third official language. Way to go, NZ, being one of the first countries to do this.

7. There's a range of climates

Want mountains? Beaches? Volcanoes? Rainforests? You'll find all of it (and more) in New Zealand. The country is amazing for the fact that you can drive for 4 or 5 hours and experience so many different landscapes and climates.

There are deserts near snow-covered volcanoes, and glaciers that descend down through temperate rainforests. Crossing from one side of the Southern Alps to the other can mean the difference between 2 meters and 8 meters of rainfall per year.

8. Never far from the coast

Even though New Zealand has a ton of different climates, the country is shaped so that nobody living in the country is ever more than 120 kilometers from the coast.

Granted, that coast (which stretches for more than 9,300 miles!) changes drastically depending on where you are in the country. But you'll never be far from it.

The word “kiwi” refers to three different things in New Zealand. First, there's the nocturnal flightless bird with the long beak that's one of NZ's most famous native species. The people of New Zealand have also been nicknamed “Kiwis.” And then there's the kiwi fruit, which, yes, you'll find all over New Zealand, even though technically the fruit came from China!

Even though some Vanuatu tribes have been jumping off high structures with vines tied around their ankles for decades, bungee jumping in its current form began in New Zealand in the 1980s. AJ Hackett designed the elastic bungee cord, and began bungee operations off the Kawarau Bridge in Queenstown, New Zealand.

11. The government is unicameral

New Zealand is run as a form of parliamentary democracy, and is part of the British Commonwealth, meaning it is technically still tied to the Queen in England.

Unlike the British government which has two governing houses, however, New Zealand only has one – the House of Representatives. They have a Prime Minister, and also have a truly representative form of government, with all of the country's active political parties being represented in Parliament.

Milford Sound – the stunning fjord located in Fiordland National Park on New Zealand's South Island, is renowned the world over for being a must-see spot.

In 2008, Milford Sound was judged the world's top travel destination in an international TripAdvisor survey, and Rudyard Kipling even once called it the eighth wonder of the world. (Though I can personally argue that Doubtful Sound is just as amazing, if not better.)

This is one New Zealand cruise worth taking.

Going out for dinner in New Zealand? No need to leave a big tip like you would in the USA. Either it's not expected, or it will be automatically tacked on to your bill as a service charge. This goes for taxi drivers, too, although none of them will turn down a couple extra dollars if you offer them in thanks.

And speaking of eating out… it's different from what you're probably used to in the US. Servers won't check on you 17 times, and they usually won't deliver a bill to you at your table. You have to go up to the register to pay, and some smaller cafes won't even keep track of what you ordered; they just trust you to tell them what you ate.

New Zealand phased out its 1-cent and 5-cent coins a few yeas ago, which means most prices either end in a 0, or are rounded up. But, this doesn't necessarily cut down on coins in your wallet, since NZ has $1 and $2 coins instead of paper bills.

15. A great place to go for the apocalypse

This is kind of a joke I have with some New Zealand friends, but it really would make a great place to hide out during the apocalypse. NZ is a nuclear-free zone. Nearly 30% of the country is protected as national parks. And Kiwis really are some of the nicest, most laid-back people you'll ever meet.

For further reading, check out these top NZ posts:

Want to get to know NZ better? Watch these movies:

Have you been to New Zealand? Did any of these New Zealand fun facts surprise you? 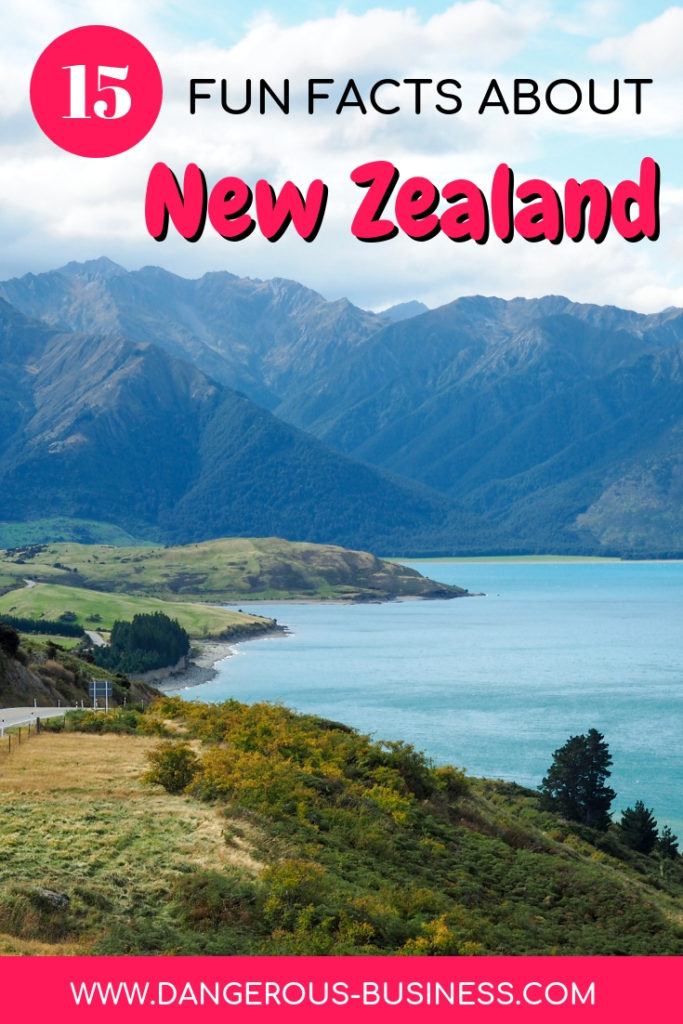