Before 6 a.m., in fact, as myself and two travel buddies were picked up by a taxi and groggily deposited in downtown Queenstown in order to catch the bus that would take us to Milford Sound for the day.

Milford Sound (really not even aptly named, as it’s actually a fjord – or fiord as the kiwis spell it – and not a sound at all) is New Zealand’s most well-known tourist destination. It’s a gorgeous fjord on the west coast of the country’s south island that you can sail through on ferry boats or hike around, rain or shine.

Mostly, it’s rain, as Milford sees upwards of 6,800 mm of rain per year – that’s more than 265 inches! Our bus driver actually told us that the Sound sees less than 150 rain-free days per year.

Somehow, Jamie, Andrea and I had managed to hit one of these 150 days.

The sun was just painting the mountains pink as we boarded our Milford Select bus in Queenstown and hit the road. By the time we were nearing the town of Te Anau to pick up some more passengers, the sky was turning a pale blue as the sun continued climbing. From Te Anau, we hit the famous Milford Road.

The Milford Road winds through Fiordland National Park, one of the most stunning bits of rugged New Zealand countryside and coast. Our bus driver regaled us with local stories and legends of the area as we traveled, and kept wondering at our good fortune with the weather. He said it had been a long time since he’d taken a group out on such a perfect, sunny day.

We stopped at the Mirror Lakes not long after Te Anau, where the mountains are (on good days) reflected perfectly in a handful of still ponds. The fog from the morning hadn’t completely lifted from the little valley when we arrived, however, so the true beauty of the Mirror Lakes was perhaps lost on us. 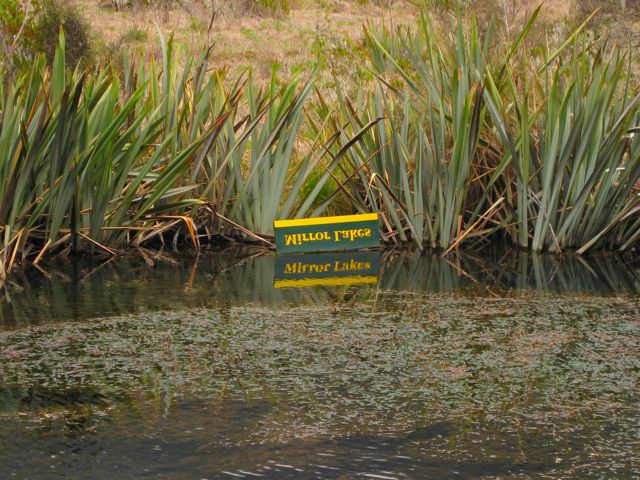 Our bus wound in and around increasing amounts of mountains, some made of ridiculously tough stone that had been carved out by glaciers. Most of them in this part of the country were still snow-capped in mid-October, and were therefore rather dazzling in the morning sunlight. 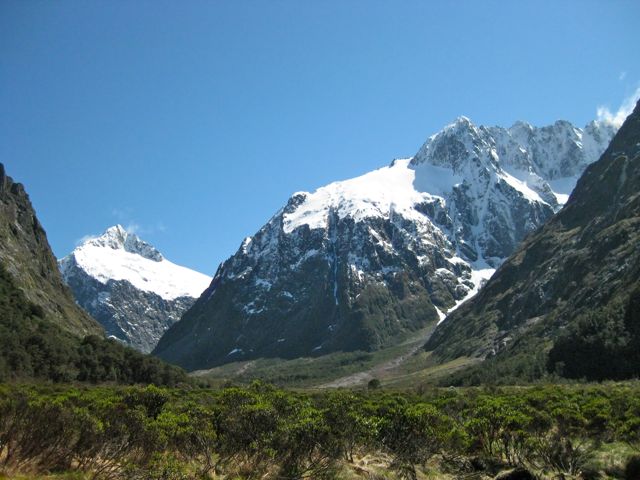 Our driver stopped a few times to point out mountain streams and waterfalls, great views, and even some kea birds – the world’s only alpine parrots – in the Hollyford Valley. 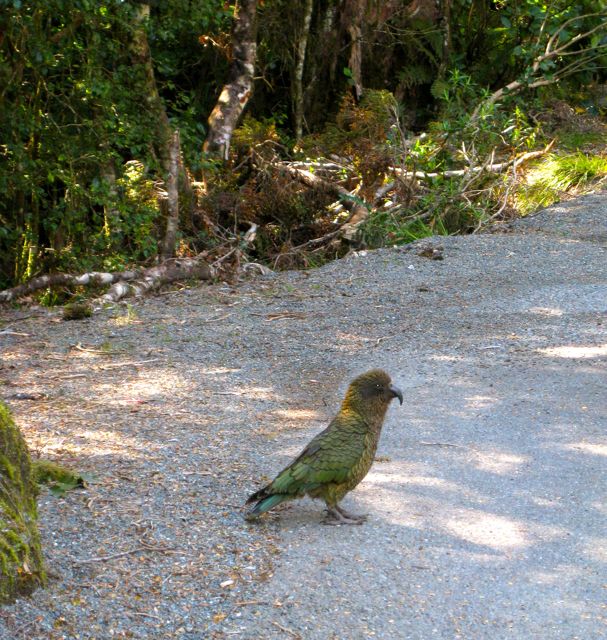 We also stopped at a little stream, where our driver encouraged us to fill up our water bottles with what he called the clearest, purest mountain-stream water. Andrea, despite her freakout about parasites a few weeks earlier when Jamie had dipped into a clear stream, filled her water bottle with the ice-cold water. Jamie and I each scooped up a handful, and I’ll agree that it was delicious. Our driver told us there was a legend that anyone who drank from that stream would live to be 102.

I’m holding him to that.

Getting to Milford Sound took nearly five hours, and I think we were all fairly thankful to stretch our legs at last and set eyes upon the famous Mitre Peak at the head of the Sound. We were encouraged to take a short walk up into the nearby hills for a good view before our boat was set to sail. 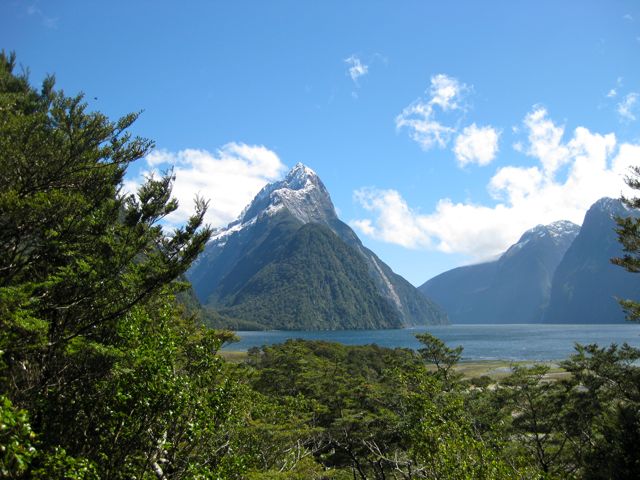 Half an hour later, we were boarding the small, relatively uncrowded Milford Adventurer. Andrea, Jamie and I headed straight for the bow of the boat, and were warned that we stood a chance of getting wet on the way out thanks to a rather strong wind that was blowing inland. I didn’t really care, but as soon as we got underway and the spray starting flying, Andrea and Jamie retreated indoors.

I stayed out front for a good portion of the ride out, chatting with a few other study abroad students from Christchurch. We marveled at the mountain waterfalls, and the lush, green rainforests that clung to the sides of the mountains, soaring over 1,200 meters above our heads.

It’s not hard to imagine why writer Rudyard Kipling once called Milford Sound the “eighth wonder of the world.” As we cruised out to the Tasman Sea and back again, one of the boat crew told us that, on rainy days, the mountains are just covered in waterfalls plunging into the Sound. I could imagine that being pretty spectacular, too, though I was secretly really glad for dry conditions. 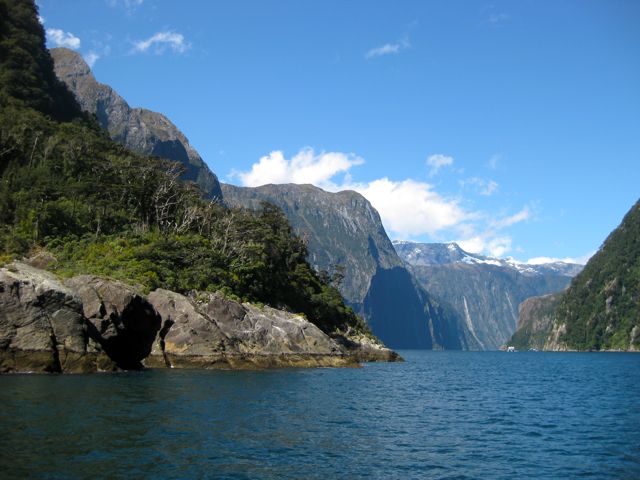 We passed by Lady Bowen Falls (one of the waterfalls that’s always present in Milford, no matter the weather), saw a few seals sunning themselves on a rock, and were taken virtually right underneath Stirling Falls. We got a bit damp, but I really didn’t mind too much. 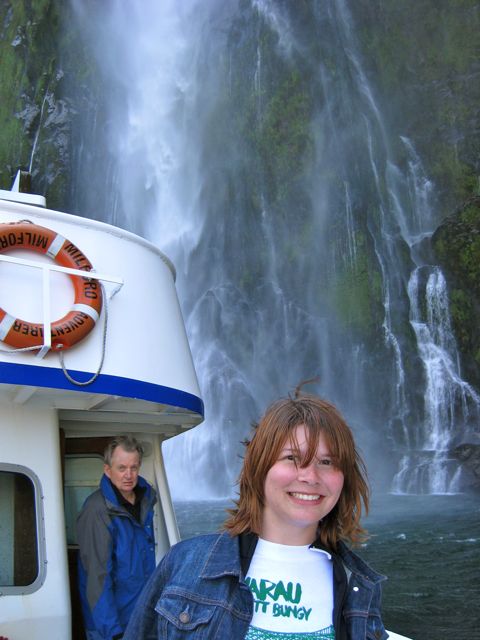 Our cruise through the Sound lasted about an hour and a half, and I suppose I can understand why it’s such a popular destination. However, nothing could compare to what we were about to do next…

Flying back from Milford Sound

On our way to the Sound, our bus driver had mentioned that the other transportation option to and from Milford was by scenic flight – either by plane or helicopter. He quoted prices (which were pretty outrageous – over $500 for some of them), but then mentioned that if he got enough interest for the ride back, he could probably talk the price down considerably with Glenorchy Air.

Jamie, Andrea and I hadn’t really even considered this option, until, right as we disembarked our cruise, he told us that he could get us a flight back for under $200. Still expensive, I know, but the price coupled with the perfect day made it sound very appealing. Plus, it meant we didn’t have to ride five hours back the way we’d come on a tour bus.

We decided to throw our bank accounts to the wind, and sign up for the “flightseeing” tour.

We were dropped off at the Milford airport, which was so minuscule that I don’t think it can really be considered an airport at all. It consisted of one short runway, and a collection of small fixed-wing planes. Our pilot – a tall, lanky man with salt-and-pepper hair – was busy physically pushing our little airplane into takeoff position. 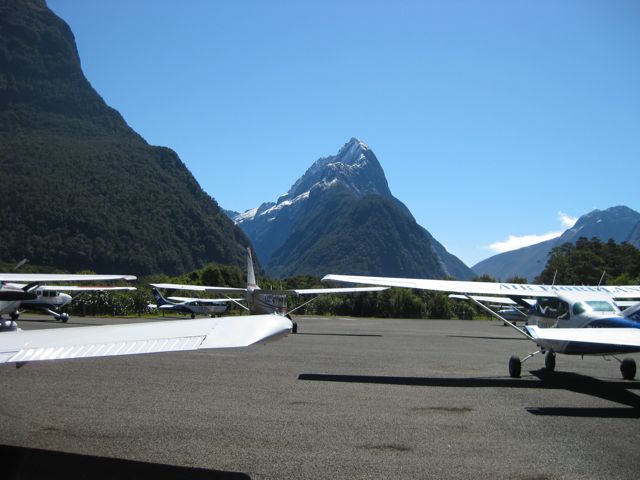 It was into that small plane (a Cherokee SIX 300, to be exact) that we were soon clambering, along with a young mother and her two kids. Jamie got to sit up front with the pilot, with Andrea and I right behind her and the family in the back. And that was the small plane’s full capacity – 7 people, two of them being kids.

Before then, I had never been in a plane so tiny; it was both exciting and terrifying at the same time. The terrifying factor was probably compounded by the life vests we were required to wear…

Once we got into the air, our flight was nothing short of breathtaking. The course our pilot took flew us right over top of the Sound to begin with, and then looped back around over the Southern Alps for most of the flight. The snow-capped peaks were mesmerizing in the afternoon sunlight, and you could see literally for miles – miles and miles of mountains.

I fell in love with New Zealand all over. 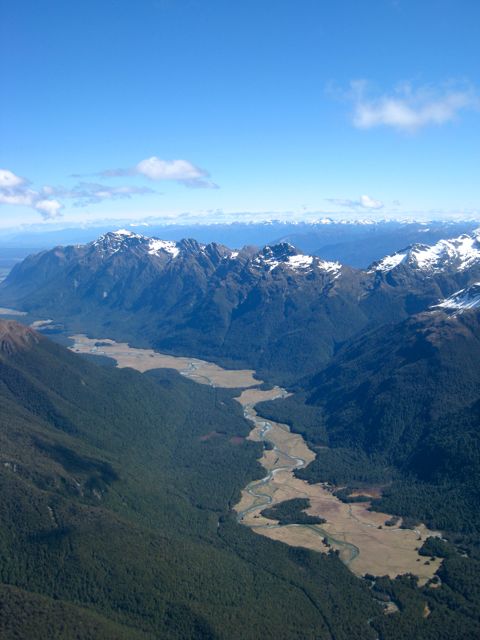 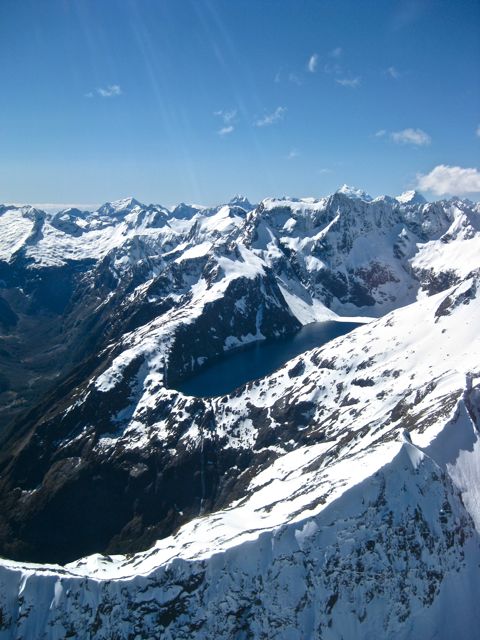 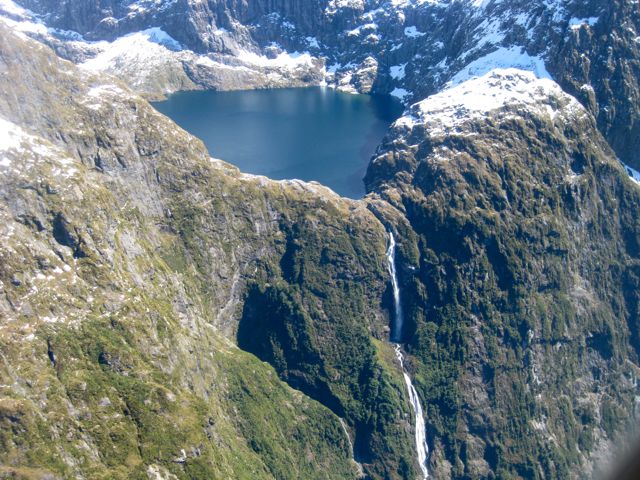 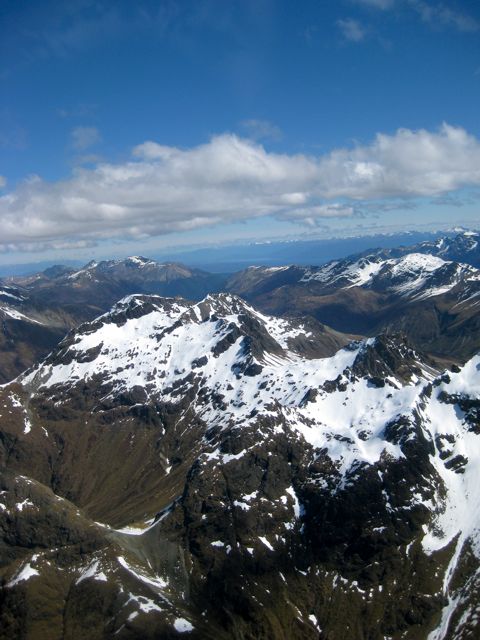 After perhaps half an hour of coasting over the mountains, one end of long, serpentine Lake Wakatipu came into view.

The lake, in the shape of a long, skinny “S,” has an interesting Maori legend behind it.  The legend goes that a giant named Matau kidnapped the daughter of one of the local chiefs and ate her (or something like that). He laid down to sleep that night, and a brave youth from the tribe set him on fire, burning him where he lay. His outline formed the shape of Lake Wakatipu, which, in Maori, means “Hollow of the Giant.” Today, Glenorchy sits at Matau’s head, Queenstown on his knee, and Kingston at his feet. The waters of the lake rise and fall up to 12 centimeters every few minutes, and this is said to be caused by Matau’s still-beating heart.

We were flying over the Glenorchy end of the lake, and it was a deep, royal blue beneath the plane’s wings, with snow-tipped mountains serving as a backdrop against the blue sky. None of us could stop snapping pictures. The whole flight, Andrea and I would swap cameras every few minutes in order to get shots on both sides of the plane. 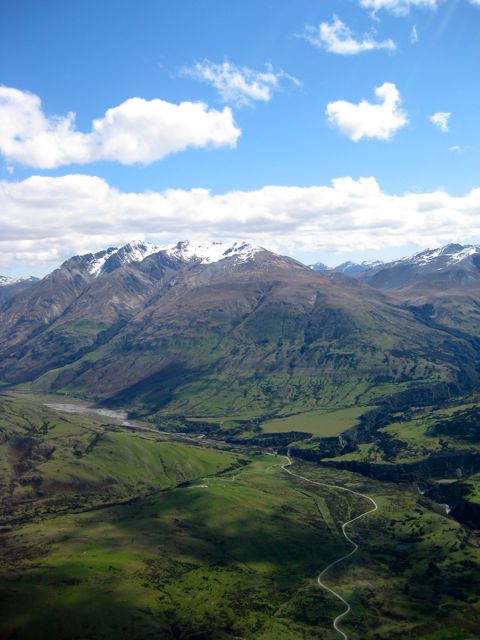 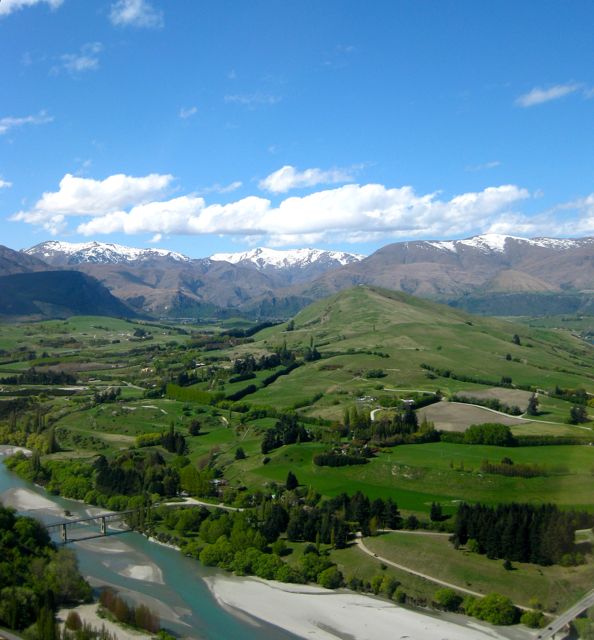 All too soon, we glided over Queenstown itself, and touched down at the small airport. We took some photos outside the plane, and thanked our Glenorchy Air pilot thoroughly for an amazing flight.

To this day, I quote this flight as possibly my favorite experience in New Zealand. It just goes to show you that, sometimes, the impulsive things we do while traveling can turn out to be some of the best.

And as for Milford Sound being the eighth wonder of the world? Well, it just might be.

Want to plan your own trip to Milford Sound from Queenstown? Check out this full-day tour to Milford (summer only).

READ NEXT: The Best Way to Visit Milford Sound: From Wanaka!

Have you ever been to Milford Sound? What did you think?

30 Comments on “Milford Sound: Eighth Wonder of the World?”