4 Reasons to Visit the American Southwest in Winter

A while back, I wrote a blog post outlining a road trip itinerary through the American Southwest. It's my favorite part of the US, and it's apparently a favorite for a lot of others, too, because that post is one of the most popular on my blog. I get comments and emails weekly about that itinerary, sometimes from people who have further questions.

And one of the top questions I get? Can I visit the Southwest in the winter?

The answer, I'm happy to say, is a resounding YES!

In fact, I think that visiting the Southwest in the off-season is the very best time to visit. I've visited in three different seasons (spring, summer, and winter), and the cooler-weather trips were definitely my favorites.

If you're considering planning a trip to the Southwest, definitely consider going in the winter. And here are all the reasons why:

4 reasons to visit the American Southwest in winter

1. It's not stinking hot

The Southwest – often considered to cover Arizona, New Mexico, Nevada, and Utah (and sometimes parts of California, Colorado, and Texas) – is a part of the United States known for being quite desert-like. In the summer months, temperatures can easily reach up into the 90s or even 100s Fahrenheit.

People still visit the Southwest in the summer (sometimes in droves, if the region's national parks are any indication), but it certainly isn't the ideal time to go if hiking and enjoying the outdoors is your main goal.

Take it from me that you don't really want to go hiking in Utah's Arches National Park or Nevada's Valley of Fire State Park in the summer. Many hiking trails through red rock country have little to no shade and get HOT not long after the sun comes up.

In the winter, though, these destinations completely change. The temperatures drop significantly (yes, it gets cold in the desert!), making hiking more than pleasant.

On my most recent trip to the Southwest over New Year's, it was a comfortable 50 degrees F at Valley of Fire State Park in Nevada – perfect for an afternoon hike!

Places in the Southwest that I love that are nearly unbearable in the summer but lovely in the winter include:

2. It's less crowded (and more affordable)

The summer months of June, July, and August are generally the busiest travel months in the US. Kids are off school, and this is when families tend to travel – meaning this is one of the most crowded and most expensive seasons visit the Southwest, too.

I've been to the Southwest in the summer, and going during this time of year almost guarantees sold out hotels and ridiculous prices in places you wouldn't expect. (I mean, I never would have guessed that I'd be paying more than $200 per night to stay at a motel in Page, Arizona, but it happened.)

Summer is also the busiest time at most of the national parks in the Southwest. For example, Zion National Park runs a mandatory shuttle into the park in the summer, requiring people to park and ride. During these months, the parking lots at the Visitor Center are usually full before 9 a.m. and there are often delays entering the park because of the amount of traffic.

In contrast, you can drive your own car into Zion Canyon during the winter, and can usually find parking pretty easily if you aren't visiting on a busy weekend or holiday.

It's similar at other national and state parks, too. Places that are filled to the brim with tourists during the summer are much quieter in the winter.

This means that you don't have to plan as far ahead for winter travel in the Southwest. I planned a last-minute New Year's trip to Nevada and Arizona in 2018, and was able to book a hotel room in Tusayan, Arizona (less than a 15-minute drive from the Grand Canyon) just a few days before going – and for a really reasonable price! This would not be possible in, say, July.

If you want the best chance of being able to stay at a particular national park lodge or hotel, definitely plan your trip in the winter.

This isn't to say that you'll run into zero people if you visit the Southwest's top attractions in the winter. Major national parks are popular year-round. (And note that you'll definitely run into more people if you're traveling during school holidays, like the week between Christmas and New Year's.)

But overall it's a much less-crowded time to visit.

Maybe this should have actually been #1 on this list. This part of the US is so. freaking. beautiful in the winter!

The varying shades of red, orange, and brown that the Southwest is known for are beautiful to begin with. But add in some golden winter sunset light or a fresh dusting of snow, and it's even more stunning.

On my previous winter trip to the Southwest (to St. George, Utah in December 2017), I was met with lots of sunshine and cool temperatures, but no snow. But on my trip to Nevada and Arizona in December 2018, I was lucky enough to see snow in northern Arizona.

(Because, yes, the areas at higher elevation – especially in southern Utah and northern Arizona – do sometimes get snow!)

I thought I'd seen beauty in Sedona and the Grand Canyon before, but seeing both those places under a layer of fresh snow was nothing short of magical.

Sedona and nearby Oak Creek Canyon turned into a winter wonderland under 3 inches of snow during a New Year's Eve snowstorm.

And the Grand Canyon in the snow? WOW. Even grander than usual, I think.

The only downside to visiting the Southwest in the winter is that the days are so short. In late December, it gets dark between 4:30 and 5:30 each evening, meaning you have less time to admire all the beautiful landscapes than in the summer.

But if that's the only negative thing I can come up with, I think I'm doing pretty good. 😉

When people ask me about whether they can do a Southwest road trip in the winter, it's because they often assume that many parks and sites close up for the winter.

For the most part, though, this isn't true.

The only place you can't visit at all in the winter is the North Rim of the Grand Canyon, which closes from mid-October through mid-May. The South Rim, though, is open year-round, as are most other national and state parks in the area.

A handful of parks have reduced services in the winter (for example, the Canyonlands National Park visitor center closes a couple days per week in the winter, and in Capitol Reef the visitor center is open for fewer hours), but this shouldn't really impact your Southwest trip at all.

The only thing you need to keep in mind is the fact that roads can sometimes get snowy/icy during the winter months. If you're planning a road trip, know that roads and parts of national parks can close due to poor conditions or for snow removal, so be prepared to be flexible.

When I was at the Grand Canyon in winter, for example, the Hermit Road (which is only accessible by private vehicle from December through February) was closed the day I was there for snow removal.

Tips for visiting the Southwest in winter

If you're going to plan a trip to the Southwest in winter, here are some tips to help you make the most out of your trip:

1. Pack for the cold

Parts of the Southwest remain mild in the winter, especially the further south you go. But if you're headed to the desert or to higher elevations (think: Grand Canyon, Bryce Canyon, Sedona, etc.), you'll need to prepare for cold temperatures – remember, it snows here!

How cold can it get? Well, when I was at the Grand Canyon this year on New Year's Day, it was 7 degrees F at sunset. Yes, that's 7 degrees. As in single-digits. As in -14 for my friends who use Celsius. As in pretty freaking cold!

The key is to pack layers – merino wool and down are both excellent choices for warm layers that won't take up too much room in your suitcase.

For my Grand Canyon trip, I had a base layer, and then sweater leggings on the bottom and a turtleneck sweater on top. Over that I had a down jacket, plus gloves, hat, and a scarf. And my go-to boots for my winter Southwest trip were my Kodiak Surrey II hiking boots with a pair of Yaktrax for added grip.

2. Be prepared to drive on snow/ice

The Southwest is a fairly large area, but if you're traveling to the popular spots in the winter, there's a decent chance you'll run into snow or other bad weather. Being comfortable driving on wet or slippery roads is really important.

It's also a good idea to check the weather for where you're going in advance of your trip, just in case you're going to need a 4-wheel drive vehicle or perhaps even snow chains on your car's tires.

3. Avoid visiting over the holidays

Like I mentioned above, winter is one of the best seasons to visit the Southwest if you want to avoid large crowds. But the caveat here is that it doesn't apply to right around the holidays – especially the week in between Christmas and New Year's – when lots of people are traveling.

If you absolutely must travel during this time rather than any other time during the winter months, then I do recommend booking things like accommodation in advance. The good news is that prices will still be generally reasonable in most places.

Thinking of planning your own winter trip to the Southwest? Here are some posts you may want to read:

Who's ready to visit the Southwest in the winter? 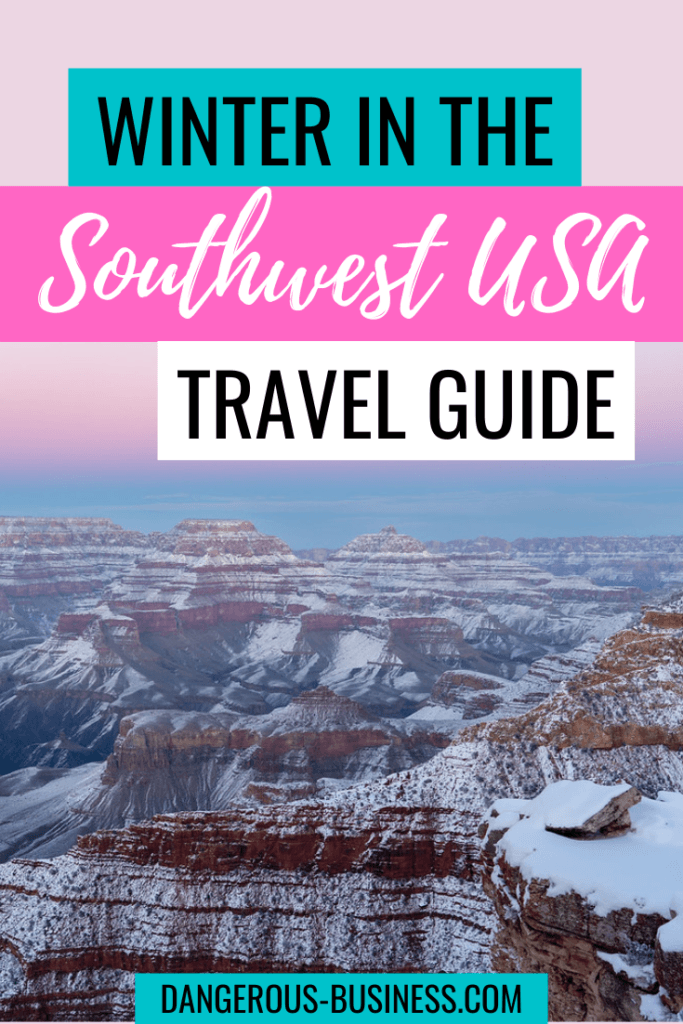