The pungent, fresh smell of handmade soap is the first thing to hit me as I walk into the darkened shop. Lavender and sandalwood and something citrus-y. As my eyes adjust from the bright New Mexican sun outside to the dim interior of the tiny gallery, other smells meet my nose, too – incense and oil paint and something that smells much, much older.

Underlying the scents of canvas and soap lies the smell of history – the smell of mud bricks and white wash. The smell of life in a traditional adobe pueblo. 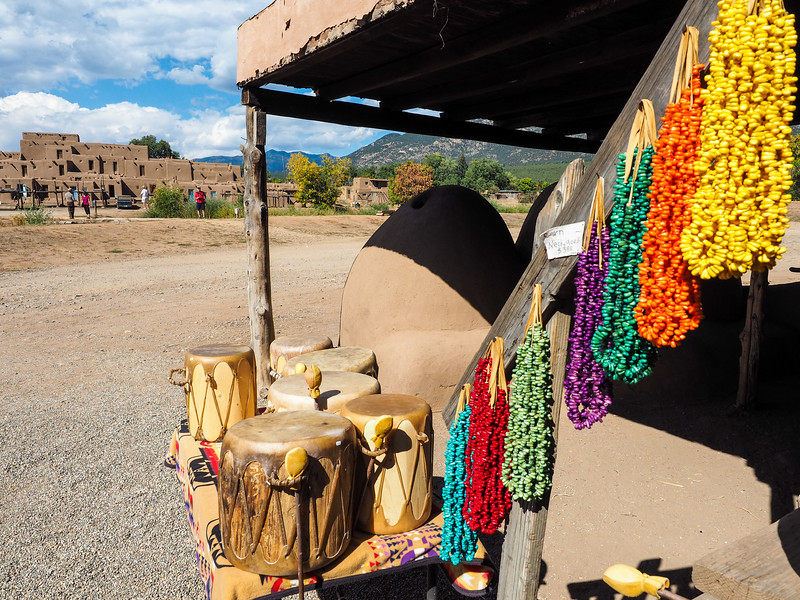 Being a Midwestern girl, I don't have much of a sense of local history. The places I've grown up and lived in haven't been old; they don't have historical structures or any remnants of once-traditional cultures. In fact, the only hint that my slice of northeastern Ohio has any history beyond suburbia are the names of streets and rivers – names like Tippecanoe and Cuyahoga. In fact, the name “Ohio” itself comes from the Iroquois word “ohi-yo,” meaning “great river.”

But we don't learn about much of the Native American history of our state beyond the fourth grade (which is really too bad).

So when I learn that there's an ancient pueblo not far from where I'm visiting a friend in Santa Fe, New Mexico, I decide I have to go. 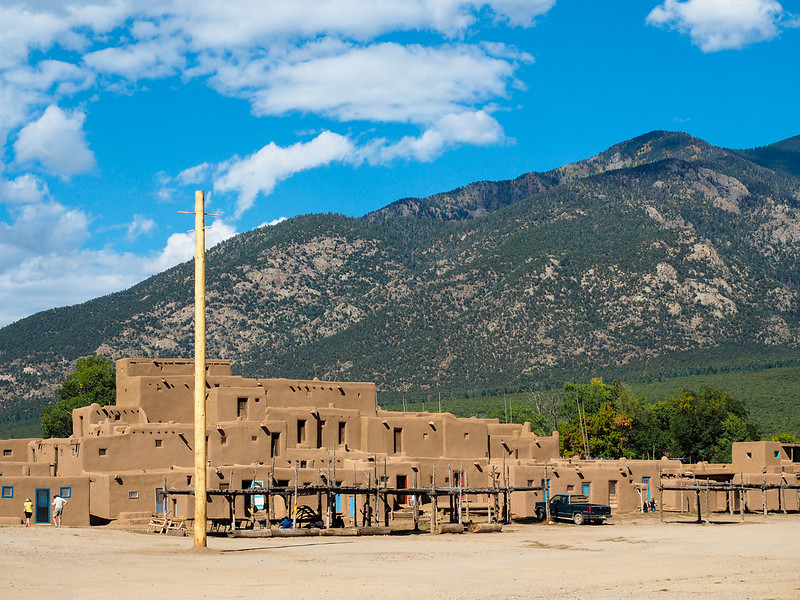 The pre-colonization history of America is fascinating to me, but I'll admit that I haven't done my due diligence as I've gotten older; I don't seek out this history nearly enough.

But I vow to do it at Taos Pueblo.

Taos Pueblo is located near Taos, New Mexico, about a 1.5-hour drive from Santa Fe. I make the drive on a sunny afternoon, admiring the mountainous scenery along the Rio Grande and imagining what I'll find in Taos.

If you know anything about Native American history in the United States, you'll know that settlers in pre-America weren't particularly kind to the people they found living on the land when they arrived. They killed them (with weapons and disease), and drove most of them off their land. Today, the reservations that remain are home to some of the poorest people living within U.S. borders.

Taos Pueblo is a little different, though.

The pueblo is an ancient one – people from the Tiwa-speaking tribe have lived in this area for at least 1,000 years, making this pueblo one of the oldest communities in the United States. This is one reason that Taos Pueblo is both a National Historic Landmark and a UNESCO World Heritage site. But those designations denote more than just age.

When I first get to Taos Pueblo, I feel completely out of place. I get my visitor's ticket and make my way into the walled pueblo with a handful of sunhat-wearing tourists toting cameras and pueblo maps. I know that Taos Peublo IS a tourist attraction – but it's also still a living community.

Even though Taos Pueblo dates back for centuries (in fact, the main part of the current adobe buildings were built prior to 1400), it's not just a historical monument or museum. Taos Pueblo is living history.

This isn't immediately obvious while walking around inside the pueblo, though – you have to look a bit for it. There are small hints. Some red chilis hanging outside a doorway to dry. The blackened openings of the mound-like earth ovens that suggest recent use. And, of course, the little art galleries and jewelry shops set inside traditional adobe homes where you can buy pottery and paintings and beautiful silver bangles. 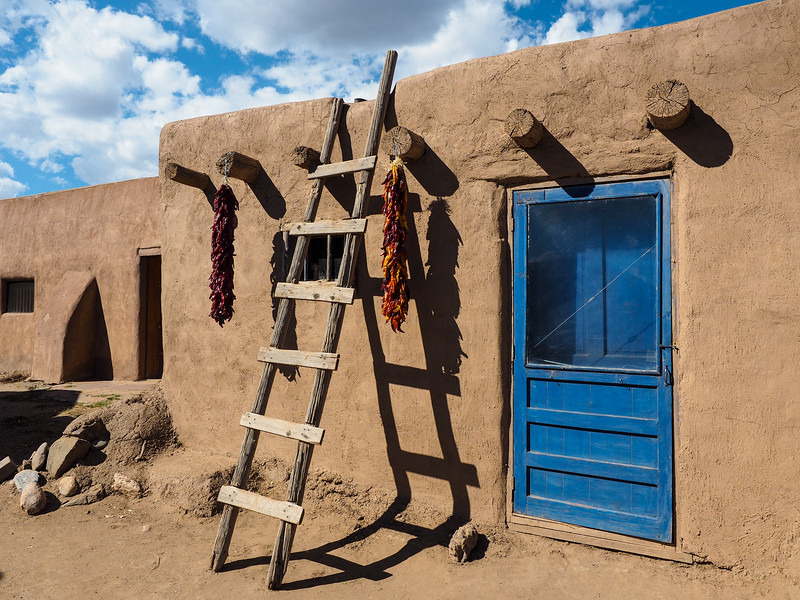 These days, very few people still live within the pueblo walls, owing to the fact that the governing Tribal Council does not allow modern amenities like electricity and running water. Most of the community, therefore, lives in modern houses outside the pueblo walls.

Inside those walls, though, history and tradition lives on. Bread is still baked in the humped earthen ovens. Trained hands still spin traditional pottery. And, once a year, the community still holds a ceremony to refinish the walls of each building in the pueblo with a new coat of adobe plaster.

As I walk around the pueblo under the hot New Mexican sun, I try to imagine living here today. A few families actually still do, calling the small two-room adobe houses home permanently. I know it would be a struggle. But they obviously feel some sort of ancestral pull (and maybe even obligation) to this place.

I decide to join a guided walking tour of the pueblo to hopefully learn why.

We start at the San Geronimo Chapel, which dates back to 1850. It replaced another church on the same spot that was built by Spanish colonists but was destroyed by the U.S. Army in 1847 at the end of the Mexican-American War, when the native Taos people joined with Mexican forces to rebel against the territory of New Mexico becoming part of the United States. 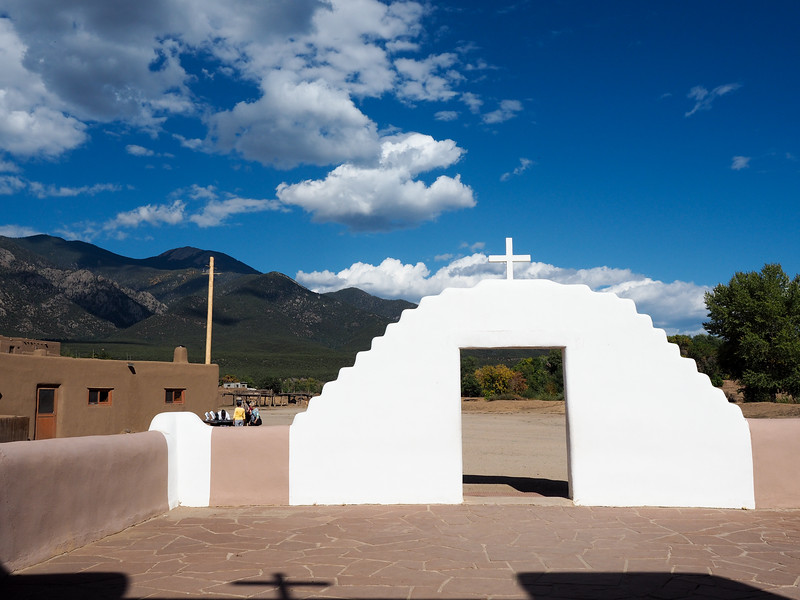 As our guide tells the story of the destruction of the church (with plenty of people inside of it taking sanctuary), I realize that Taos Pueblo has seen its fair share of violence and conflict over the years.

We walk over to Hlauuma or the Northern House next, which is the one of the largest Pueblo structures still standing anywhere in America. It's adobe walls rise four stories, and our guide tells us that they are several feet thick, thanks to the tradition of adding a new layer of plaster to the outside each year. Here at Taos Pueblo, this structure (along with the Southern House across the river) is sacred to the community. 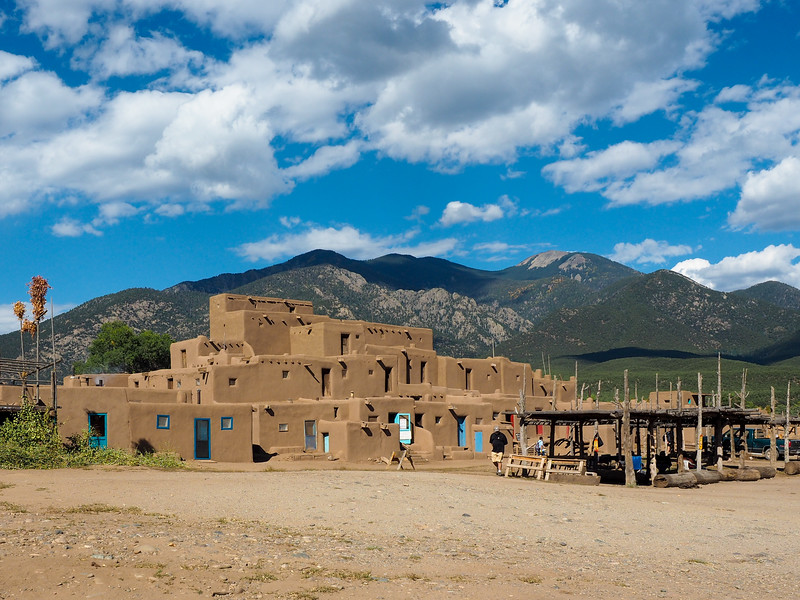 We stand in the shade within view of the Northern House while our guide, a young college student who grew up in the Taos Pueblo community, tells us one of the most interesting stories related to the pueblo's history.

Back in the early 1900s, President Teddy Roosevelt decided to take tens of thousands of acres away from the pueblo's land in order to create the Carson National Forest. Now, while I am a big fan of national parks and protected lands in the United States, this land was already being protected by the tribe. Part of the land in the mountains set aside for the National Forest included Blue Lake, which the Taos Pueblo people consider sacred. Even though many of them were converted to Catholicism by the Spanish settlers who came in the 1500s, the tribe still holds the spiritual belief that the Taos people originated from the lake. Losing it was essentially losing a huge part of their history; part of their identity.

The story makes me uncomfortable – but it's a common one when it comes to land traditionally belonging to the native people in America.

Thankfully, this story has an unexpected ending. While most land taken from Native Americans by the government has stayed in government hands (or been sold off to other people), the people of Taos Pueblo won a huge victory in the 1970s when Blue Lake and most of their former land in the mountains was given back to them. Today, the lake is off-limits to anyone except members of the pueblo. 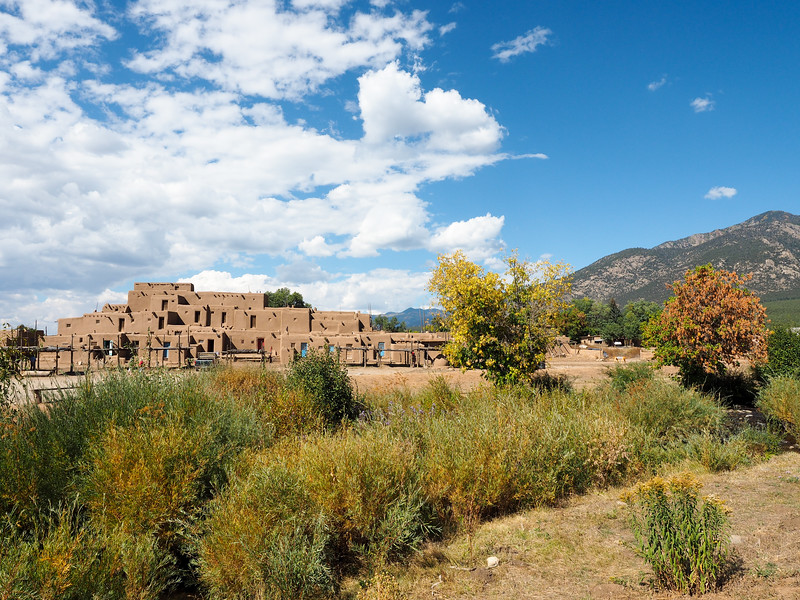 After the tour ends, I wander over to a wooden bench beside the small river that runs through the center of the pueblo. The sun is hot – almost unbearably so – but a cool breeze flutters the leaves in the shade. I look out over the pueblo, and realize that I think I get it. I can never fully understand or relate, of course, since this isn't my culture or history.

But I think I understand why people have decided to stay here – even live here.

To the people of Taos Pueblo, this isn't just another historic site for tourists to visit. It's their history and culture embodied; their story; their home. 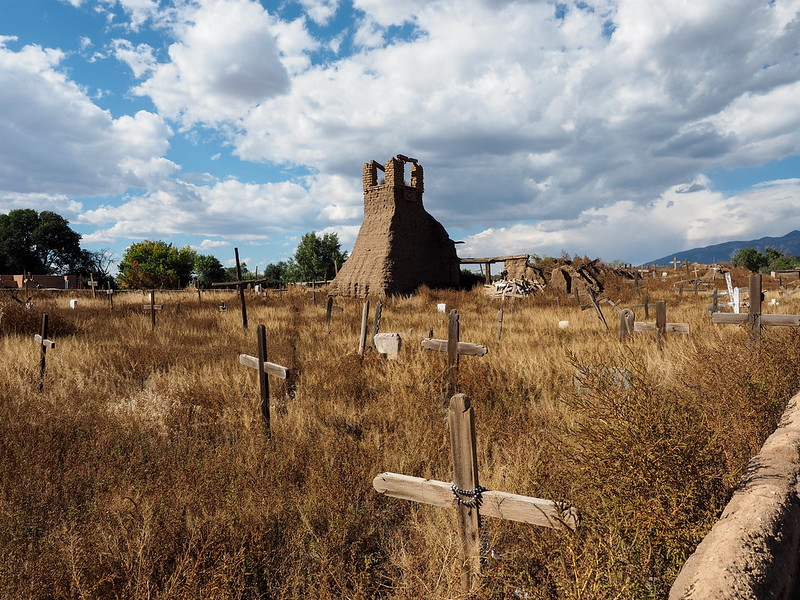 If you ever find yourself in northern New Mexico, I highly recommend a visit to Taos Pueblo for this glimpse into a history and way of life many Americans know very little about.

WHERE: Taos Pueblo is just outside of the city of Taos in north-central New Mexico.

HOW MUCH: $16 per person for adults 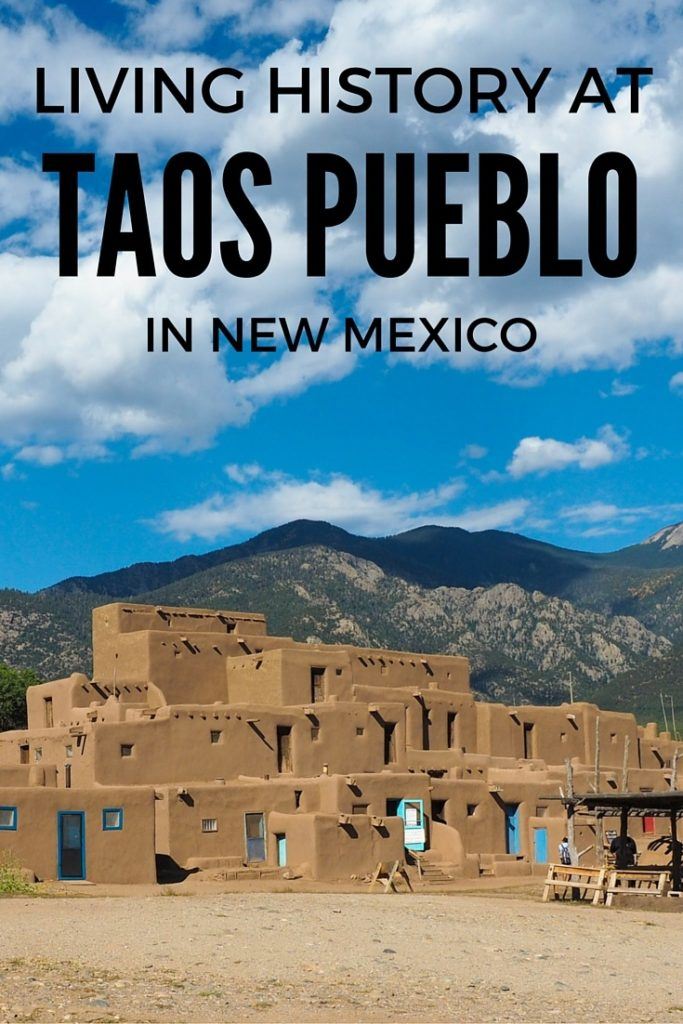