Is Antelope Canyon Really Worth Visiting?

Even if you didn't realize it at the time, chances are you've seen a photo of Upper Antelope Canyon.

It's a narrow slot canyon located in northern Arizona known for is smooth and curvy orange walls and the light beams that shine down between them at certain times of year. 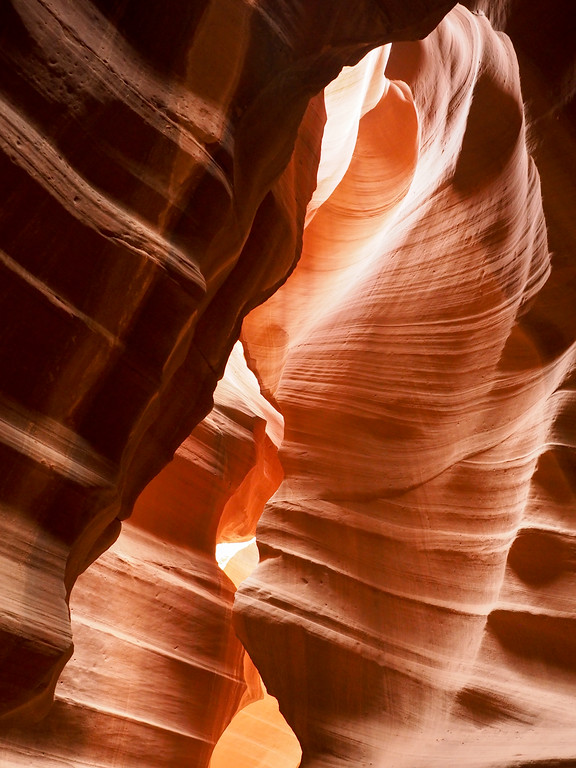 I first visited Antelope Canyon on a scorching day in August in 2011. My sister and I were mesmerized by the slot canyon, and barely even noticed the abundance of people inside it with us. It was a magical place carved out by Mother Nature, and I came home singing its praises.

The second time I visited was almost 5 years later, during a road trip through the American Southwest that Elliot and I did in April 2016.

Five years is a pretty long time, and in that time I've changed a bit both as a person and a traveler. I've been to dozens of new countries, have honed in on my ideal travel style, and have turned my blog into a business. It's only natural that along the way I've begun to approach touristy spots a little differently, too.

Here's the thing about tourist attractions: usually they are popular for a good reason. I never skip them even when I know I'm likely to be met by large crowds or long lines because I always like to come to my own conclusions about a place.

But I definitely went to Antelope Canyon the second time around with a more critical eye.

It's kind of like Stonehenge in a way – the photos of it look really cool and probably make you want to visit. But is it really worth it to go?

Let's look at the good and bad of a visit to Antelope Canyon:

Antelope Canyon has become a hugely popular attraction in the Southwest, especially from April to October when you can see the light beams shine down into the upper part of the canyon. And, even though the amount of people going into the canyon each day is regulated by the fact that you have to visit on a guided tour, the number of people visiting each day has certainly risen in recent years. The size of the canyon, however, has not changed, meaning you can often find yourself elbow-to-elbow with others.

These canyon tours also sell out quickly. Elliot and I hoped to do a longer, photography-based tour this time around, but found that every space with every company was booked weeks in advance of our visit – and we weren't even going in the heart of high season! Midday tours also sell out fast, and we barely got ourselves on one in time. (Midday tours are the most popular because you can only see the light beams between 11 a.m. and 1 p.m. on most days.) This is not the type of tour that you could just rock up to on the day you want to go and expect to get a spot at a prime time of day.

Tours of Upper Antelope Canyon are not really cheap, either. Prices range from $40-$60 per person for a standard tour, with midday tours being towards the more expensive end. These standard tours include transport from downtown Page, a Navajo park fee, and an hour-long guided tour of the slot canyon. Photography-focused tours (which allow you to bring a tripod and give you two hours inside the canyon) cost $80-$90 per person. 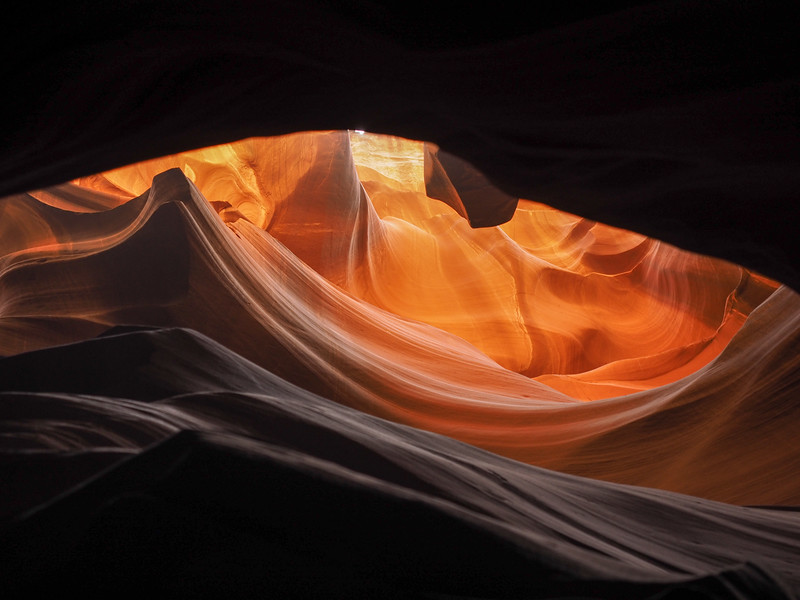 I don't know how it is on the photography tours, but I know that things can feel rushed on the standard tours of Antelope Canyon. This is because everything is on a timer, and they don't want stragglers throwing things off. This unfortunately means that if the light beams don't show up until the last 10 minutes of your tour, you won't get any extra time to see/photograph them.

Considering the amount of people that they shuttle through the canyon each day, things actually run pretty smoothly. You move slowly through the canyon one way, stopping frequently for your guide to point out cool rock formations or help you take photos. Then you move back through much more quickly on the way out (so quickly that you're not supposed to stop at all – though our group did stop briefly to see some light beams).

If you do manage to book a longer photography tour, you get priority when it comes to the best spots to take photos. Guides will try to shoo people out of your shots, and people generally respect the fact that you've paid a bit more in hopes of getting better photos in the canyon.

So what's my conclusion? Well, I can say that there was definitely a difference between my very first tour of Upper Antelope Canyon and my second. In the last 5 years, the slot canyon has become MUCH more popular, and I definitely felt more rushed the second time around.

Upper Antelope Canyon is not the only slot canyon near Page. You can visit Lower Antelope Canyon, for example, which is just across the road. It's much easier to visit (you can more or less just show up and hop on a tour), and entry is considerably cheaper.

BUT, Upper Antelope Canyon is the only place where you have a chance of seeing those iconic light beams.

Of course, since you have to book tours in advance, there's no guarantee of clear, sunny skies to allow for those light beams to shine down between the canyon walls… But the chances of seeing them are pretty good during the summer months.

So would I recommend going?

To be honest, I think I still would. Upper Antelope Canyon is so unique and so incredible that I think it's possible to look past the crowds and still be able to appreciate the beauty of the place.

However, if you don't like crowds and aren't too concerned about seeing those light beams, then I would probably suggest skipping this one.

Elliot and I booked a 10:30 a.m. tour with Chief Tsosie's Antelope Slot Canyon Tours for $58 each. Most of the companies in Page give similar tours (and also have similar names), so I don't know that it really matters all that much who you go with. Just be sure to book your tour online ahead of time if you plan to visit during peak season (which starts as early as April each year). Also note that, unless you book a dedicated photography tour, you are not permitted to bring a tripod into Upper Antelope Canyon.

If you're more interested in Lower Antelope Canyon, check out Ken's Tours.

So what do you think? Would you go, or would you skip this one? 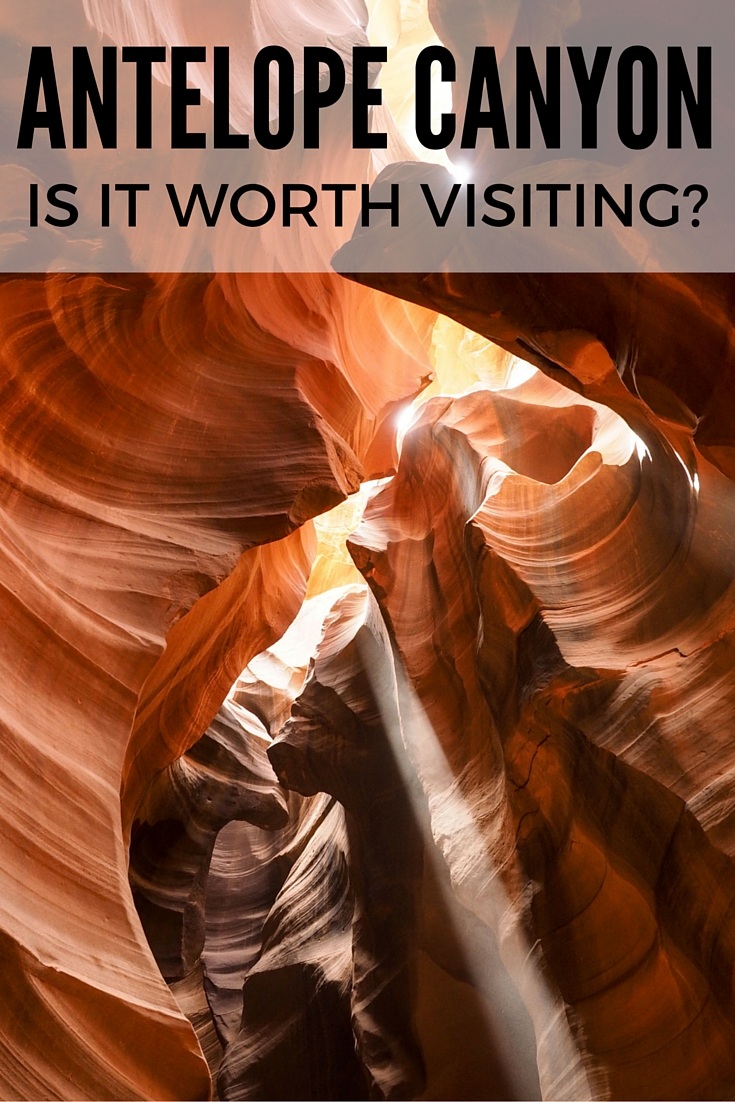 42 Comments on “Is Antelope Canyon Really Worth Visiting?”