These are just a few things that I personally love about Norway; things that will likely keep me coming back for years to come.

But other than just being a gorgeous slice of Scandinavian paradise, Norway is also a pretty interesting country!

Even if you're a big Norway fan like me, chances are there's a fun fact in this list that will be new to you. Let's all learn something new about Norway today!

Norway – or, more correctly, the Kingdom of Norway – has two official names. And neither of them is “Norway!”

The country's two official names are Norge and Noreg, depending on which written standard of the Norwegian language you're using (Bokmål or Nynorsk). Norge is the more common one to see as you're traveling around.

“Norway” was a name given to the region by the Anglo-Saxons all the way back in the late 800s. It translates to “northern way” or “way leading to the north,” referring to the country's Atlantic coastline.

2. A tale of Vikings and kings

Norway certainly has had an interesting history. There have been people inhabiting the land since prehistoric times (as early as 9000 BC), especially in the north. But of course most people associate Norway with its Viking Age, from the 8th to the 10th century AD.

It was during this time that Viking seafarers raided, traded, and colonized all across Europe and the Atlantic, from the British Isles to Iceland to even eastern Canada. (Did you know that the Vikings founded cities like Dublin and Reykjavik, and first settled Normandy?)

The Kingdom of Norway was founded all the way back in the year 872, when several different kingdoms were merged by the Viking king Harald Fairhair. The Kingdom has existed ever since, though it of course has changed shape and has often been part of larger kingdoms with Denmark (1537-1814) and/or Sweden (1814-1905).

Norway separated (peacefully) from Sweden in 1905, and has been sovereign even since (with the exception of when it was under German occupation during WWII).

Norway still has a king (currently Harald V) and is a constitutional monarchy, but state power is held by parliament, the cabinet and the supreme court.

Norway is a long, skinny country that covers just under 150,000 square miles. Its borders include Sweden to the east, Finland and Russia (yes, Russia!) to the north-east, the Norwegian Sea (part of the Atlantic Ocean) to the west, and the North Sea to the south.

The entire country only has a population of about 5.4 million, though, meaning it's one of the least-densely populated countries in Europe. If you spread the entire population out evenly, you'd have less than 40 people per square mile.

This is why, when you visit Norway, most areas still feel quite untouched.

4. The coastline is how long?

We know how much land Norway covers, but one thing no one can agree on is how long Norway's coastline actually is. If you draw a straight line along the coast, it would be about 1,650 miles long. But once you add in all the bays and long fjords that Norway is known for, plus the distance around all its various islands, the “real” length of its coastline could be anywhere between 16,000 miles and 63,000 miles long!

Because of this, Norway is considered to have one of the longest coastlines in the world.

5. The happiest place on earth

It's hard to say whether it's all that space and fresh air, or maybe the country's strong social programs, or the relative wealth of the nation (or, probably, a mixture of them all), but Norway is consistently ranked as one of the happiest countries in the world. It was #1 of the World Happiness Report in 2017, and has been in the top 10 since 2013.

Norway ranks highly on all sorts of other lists, too, when it comes to things like personal freedom, civil liberties, and democracy. It also regarded as one of the safest countries in the world, with a very low crime rate and relatively high ranking on the Global Peace Index.

6. Show me the money

Today, Norway is regarded as a “rich” country in Europe thanks to its oil production. The country is one of the largest producers of oil and natural gas in the world.

The government of Norway has been investing surplus revenues from its oil industry since 1990 in what's officially called the Government Pension Fund of Norway, but most often called just the Oil Fund or simply “The Fund.” The idea behind this fund comes from the knowledge that there's only so much oil to be refined, and that even during boom times it's a good idea to plan for the future.

7. The land of social safety nets

Speaking of planning for the future, Norway is known for its social welfare programs (like The Fund) that afford its residents a certain amount of social and financial security.

Just a few things that all Norwegians are entitled to include:

Some people (especially in the US) describe Norway as a “socialist” country. But social welfare programs do not equal a socialist country. Norway's economy is still strongly capitalistic; Norwegians just pay a much higher tax rate (think like 45%) in order to receive all the social benefits they do.

Even though it seems at-odds with oil/gas being one of Norway's largest industries, Norway is a world leader when it comes to being eco-friendly at home. Currently 98 percent of the country's electricity production comes from renewable energy sources – mainly hydropower.

Norway also has the largest number of electric cars per capita in the world, and buying an electric vehicle is becoming the norm there. Owners of electric cars in Norway get big tax breaks, as well as reduced fees on things like parking and ferry fares.

None of this is surprising; Norwegians tend to have a very positive relationship with their outdoor environment, so a desire to protect and preserve all those gorgeous natural spaces makes sense.

Speaking of a love for the outdoors… Norwegians love getting outside to walk and hike – but they especially love to ski. Cross-country skiing is akin to religion for many Norwegians, and they also love downhill skiing and ski jumping.

This is not at all surprising, considering that skiing was invented in Scandinavia. It was Norwegian Sondre Norheim who invented the first ski binding.

In Norway, everybody skis. So much so that kids learn cross-country skiing in school!

It's probably not surprising that Norway is the winningest country in the Winter Olympics, and that most of their medals have come in sports that involve skis.

RELATED: 10 Reasons Why Northern Norway in Winter is Awesome

10. A tradition of reindeer

Norway is a pretty homogenized society today. (Read: There are a lot of tall, beautiful white people.) But an important part of Norway's cultural history I don't want to skip over is that of the Sami people.

Traditionally, the Sami people were reindeer herders, and they still manage vast herds of reindeer (though today most of them use snowmobiles!). They also are known for their colorful costumes, traditional handicraft products, and oral traditions like singing (known as joik).

Chances are, if you visit Northern Norway, you'll have the chance to have some sort of Sami cultural experience. I highly recommend doing this if you can, as it's a fascinating culture to learn about.

There are plenty of countries around the world that are known for their cuisine. Like Italy or Japan or Mexico.

Norway… isn't exactly known for its culinary creations. BUT, that doesn't mean that Norway doesn't have great food! There's plenty of good food to be found in Norway, including some patently “Norwegian” dishes that you might want to try.

Some must-have traditional Norway foods include:

The Arctic Circle runs through the northern part of Norway, meaning that locations above this line experience both Polar Night and the Midnight Sun, and offer a good chance of seeing the Northern Lights during the dark winter months.

One common misconception is that you can see the Northern Lights EVERYwhere in Norway. This is not true; they are very rarely visible as far south as, say, Bergen or Oslo. For your best chance of seeing them, you want to be at least as far north as the city of Tromsø, nicknamed the “Gateway to the Arctic.”

Another misconception is that it's pitch black during Polar Night. This also isn't really true. While it's true that the sun doesn't rise above the horizon in the dead of winter when you're above the Arctic Circle, most places still experience the equivalent of several twilight-like hours per day; it's not 24 hours of full darkness.

The Midnight Sun, though? Yes, it stays light for pretty much 24 hours a day around the Summer Solstice! You still get golden “sunset” and “sunrise” hours, but it doesn't get completely dark. And even outside of Solstice time (like in July) even the middle of the night looks more like dusk/dawn than full dark.

Want to read more about Norway?

Here are some of my best posts about Norway if you want to read more about traveling in this beautiful country:

Like the Norway photos you see here? They're all available to purchase as prints over on Smugmug!

Which of these Norway facts surprised you the most? Did you learn anything new? 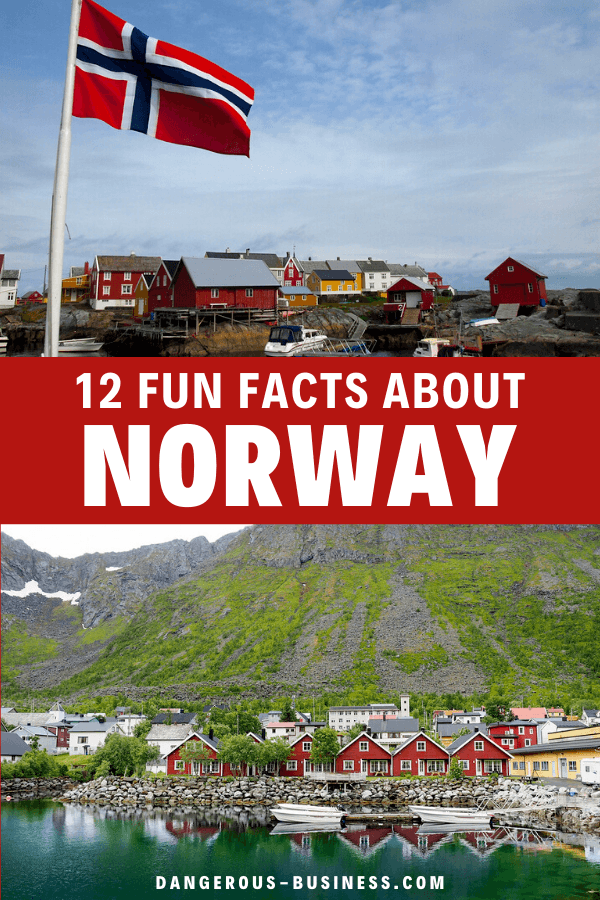