Norway in a Nutshell: What Is It, and Should You Do It?

Home » Europe » Norway » Norway in a Nutshell: What Is It, and Should You Do It?

Even before my love affair with Norway officially began in 2015, I had heard of the famous “Norway in a Nutshell” tour. It's so named because it allows you to experience the best of Norway – waterfalls, mountains, fjords, and more – all in one journey, often in just one day.

The “original” Norway in a Nutshell route runs between the cities of Oslo and Bergen, so when I finally decided to visit Bergen for the first time in 2017, I knew I wanted to get there by taking this tour.

You start in either Oslo or Bergen (I started in Oslo), and then cross the width of Norway on a series of trains, boats, and buses. Along the way you travel through Norway's UNESCO-recognized fjord and mountain scenery, and also take a trip on one of Europe’s top scenic railroads.

I'll be honest: Doing the Norway in a Nutshell tour in one day makes for a really long (12+ hours) day. But damn is it an epic day.

Norway in a Nutshell: What is it?

Here's a look at what Norway in a Nutshell actually is, as well as some tips for taking this journey yourself.

So, the first thing to know about the Norway in a Nutshell “tour” is that it isn't really a tour at all in the usual sense of the word. There's no guide with a little colored paddle to follow – you're more or less responsible for getting yourself from Point A to Point B.

When you book your tour (with Fjord Tours, who coordinate the original tour and make everything easy to book in one nice, neat package), you'll be sent a series of tickets that are good for the various forms of transport that you'll take on your journey. You'll also get a printed itinerary with departure times and other need-to-know information about each leg of your trip.

Norway in a Nutshell is essentially an independent tour, but without the stress of booking everything separately on your own. 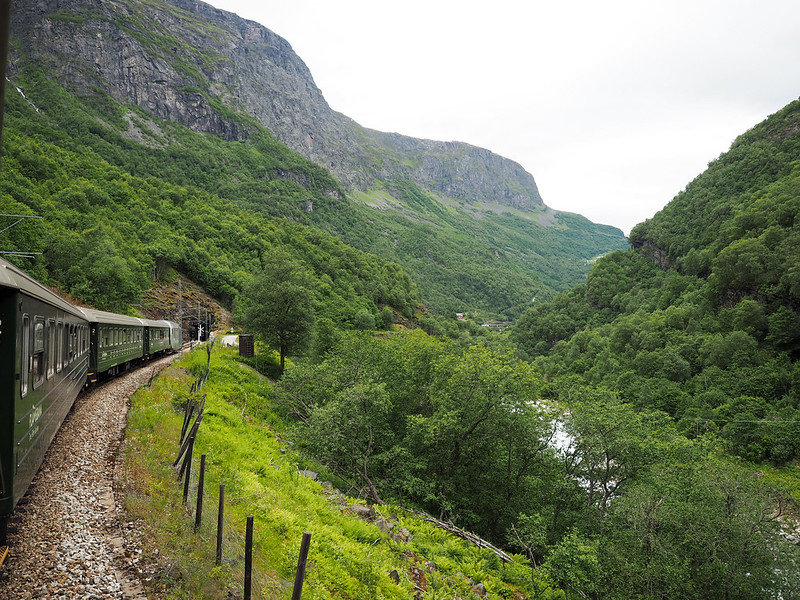 Norway in a Nutshell itinerary

If you book Fjord Norway's original Norway in a Nutshell tour, your itinerary will look something like this:

Leg 1: Train from Oslo to Myrdal

You'll head west from Norway's capital on what's known as the Bergen Railway (you can actually take the same train all the way to Bergen, but of course the point of Norway in a Nutshell is to see way more than you could from just the one train).

This leg of the trip takes about 4.5 hours, and the scenery really is best during the second half of the ride (meaning if you want to nap for the first half, you don't have to worry about missing much).

You'll get off the train in the little mountain town of Myrdal, and have maybe half an hour before getting on the next train. There's a decent cafe here, so if you want a coffee or snack, now is a good time to grab one.

The next leg is on the famous Flåm Railway, a 20.2-kilometer-long branch of the Bergen Line. This train ride is often named one of the most beautiful train journeys in the world, but make sure to keep your eyes open because it only lasts for about 45 minutes!

The ride goes through some spectacular scenery. Prepare for mountains, valleys, waterfalls, and tiny little villages. You'll also pass through 20 different tunnels as you make your way down 867 meters in elevation, so just be aware that you won't have views for the entire 45 minutes. 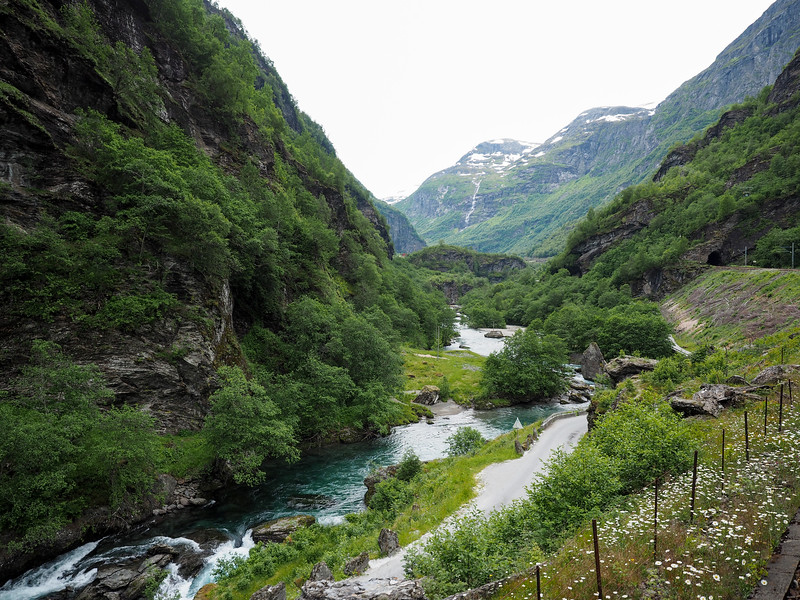 Tip: Both sides of the train have great views, so you really can't sit on the “wrong” side. I sat on the right side of the train, which is the side the waterfall will be on when traveling from Myrdal to Flåm. (You stop at the waterfall, though, and can get off the train for a few minutes, so again don't worry if you can't get a seat on that side.)

Just try to sit next to a window that can be opened so you don't have to take photos through glass.

Once arriving in Flåm, you'll have half an hour or so to explore the little port town before embarking on a ferry for the next portion of the trip. This part – the cruise on Aurlandsfjord and Nærøyfjord – was my absolute favorite part of the day. Even though I've cruised Norwegian fjords before, and even though it was a bit rainy, the scenery in this part of Norway was just INCREDIBLE.

Nærøyfjorden (one of the narrowest fjords in Europe that also appears on UNESCO's World Heritage List) was especially beautiful with ridiculously tall and steep mountains.

The cruise lasts about two hours, and there's indoor seating and a cafe serving snacks and hot drinks in case you hit some rain like I did.

You'll disembark the ferry in Gudvangen, and then board a bus that will take you to the town of Voss. During the summer months (May-September), this bus ride will include a ride along Stalheimskleiva, one of Northern Europe's steepest roads with 13 hairpin turns.

If you want to be super impressed by a bus driver, you'll want to ride a bus down this road. It's SO steep, and those turns are SO tight. I didn't expect this part of the journey to be so thrilling, but it really was!

Leg 5: Train from Voss to Bergen

The last leg of your Norway in a Nutshell journey will be another train ride, this time from Voss to Bergen. You won't see any better scenery on this ride than you already have, so feel free to just sit back and relax for about an hour and 20 minutes.

Norway in a Nutshell FAQ

Still have questions about Norway in a Nutshell? I did, too. Here are some answers to the most common questions:

What time of year can I go?

The good news is that this is a year-round attraction! You can book Norway in a Nutshell in any season.

(And remember, there's no bad weather in Norway – only bad clothing!)

Can I do this in one day?

Like I mentioned above, you can do Norway in a Nutshell in one day if you do a one-way trip (like Oslo to Bergen or vice versa). It's a long day – I started at 8:25 a.m. and didn't arrive in Bergen until a little after 9 p.m. – but definitely doable. I used this tour as my way to travel from Oslo to Bergen.

You can also do round-trip tours (popular from Bergen), or customize one to spend more time in some of the cities along the way.

Where should I stay overnight?

If you want to extend your Norway in a Nutshell trip, you totally can. Popular places to spend a night include Myrdal (popular with hikers), Flåm, and Voss. If you stay overnight in Flåm, you can also add on activities like a fjord safari, kayaking, or even snowshoeing during the winter months.

You can also overnight in Bergen or Oslo if you're doing a round-trip journey; both cities have tons of things to do.

If you do this trip one-way like I did, you may be wondering what the heck you'll do with your luggage. Thankfully, you can do Norway in a Nutshell with luggage in tow pretty easily – you're just responsible for it yourself.

On the Bergen Railway trains, you'll find luggage racks at the end of every car (and also shelves above your seat for smaller bags). On the Flåm Railway, porters will load your luggage into a separate car if you want – just look out for the luggage gathering area in Myrdal. And there are of course designated places for luggage on both the bus and boat, too.

If you're doing a round-trip itinerary, I would suggest just bringing a small overnight bag with you and leaving your main luggage at your hotel in either Bergen or Oslo if possible.

A round-trip from Bergen (which includes everything except the train ride to Oslo) is actually the best deal when it comes to Norway in a Nutshell. That round-trip journeys start at 1440 NOK ($180 USD). 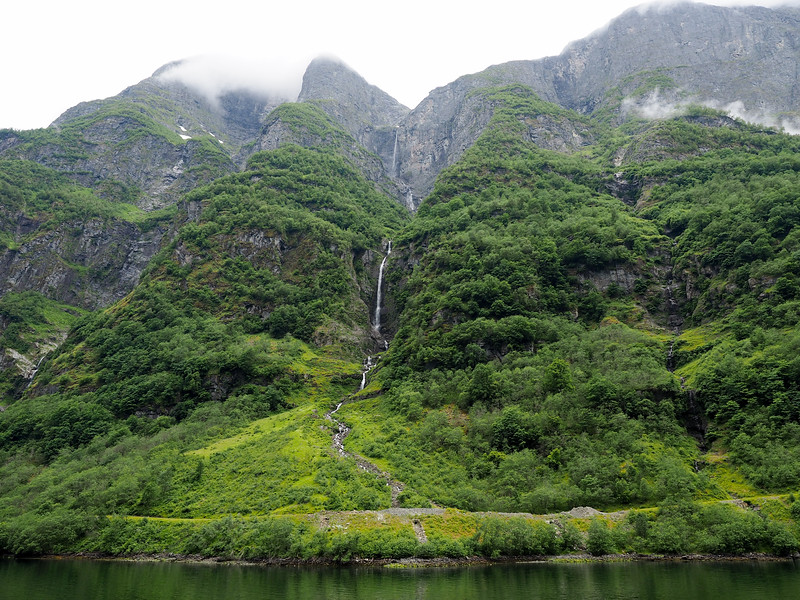 This is the biggest question people ask about Norway in a Nutshell. Since it's not technically a tour, and since you could totally book every single leg of this journey independently, you don't *have* to book the whole package if you don't want to. Booking thing separately might even save you a bit of money.

But, if I've learned anything from my years of travel, it's that sometimes it's worth paying a little extra for convenience (and in this case the convenience is booking everything in just a few clicks on Fjord Tours‘ website).

I definitely think Norway in a Nutshell is worth it, even if you only have one day to spend on it like I did.

What do you think? Would you want to do the Norway in the Nutshell tour? 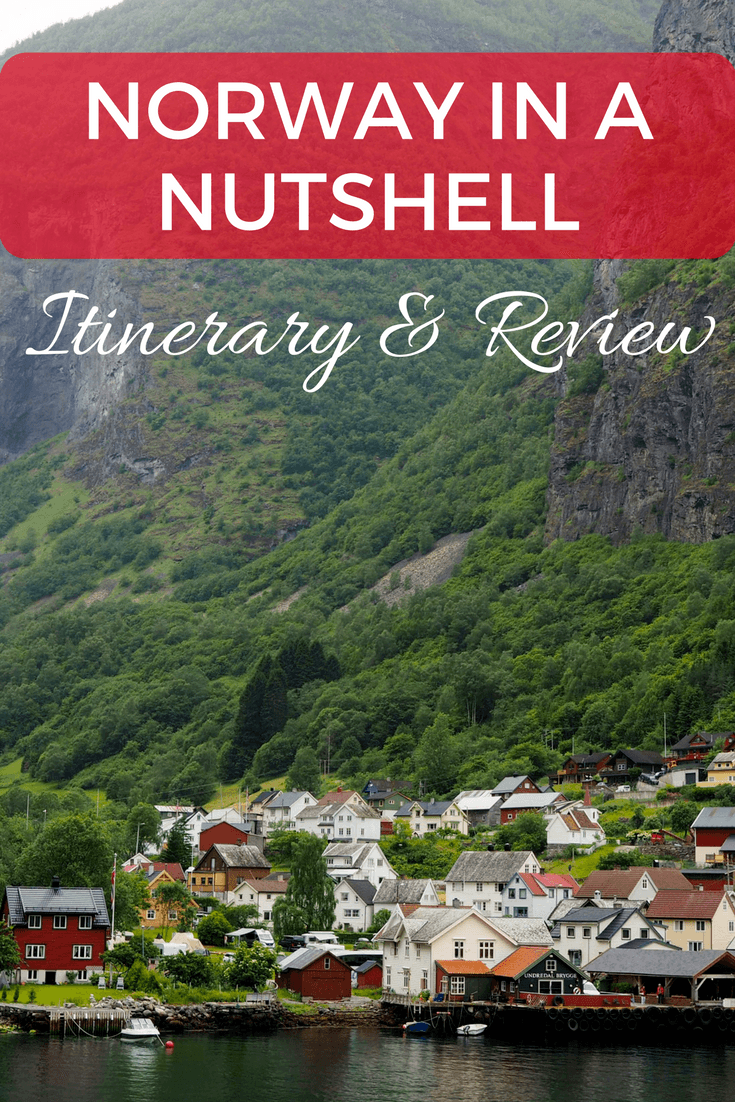 *Note: Thanks to Visit Norway and Fjord Tours for hosting me and organizing this part of my trip. As always, though, all opinions are 100% my own.

79 Comments on “Norway in a Nutshell: What Is It, and Should You Do It?”