The Most Famous Fjord in Norway

Home » Europe » Norway » The Most Famous Fjord in Norway

It was drizzling slightly as I pulled my rental car into the car ferry line at Hellesylt and popped into the gift shop for a last-minute purchase of some gloves (who knew it would still be so cold in Norway in May?).

As I sat in line and waited for the ferry to arrive, I did some people watching and attempted to do some reading about the fjord that now lay in front of me. As I waited, a bus full of tourists rolled up and emptied into the ferry line, pulling plastic rain ponchos up over their heads.

This wasn't surprising, however: Geirangerfjord is arguably the most famous fjord in all of Norway – which is saying something, considering how many fjords Norway contains. The S-shaped fjord on Norway's west coast is one of the longest and deepest in the world, and is considered an “archetypical fjord landscape and among the most scenically outstanding anywhere,” according to UNESCO. 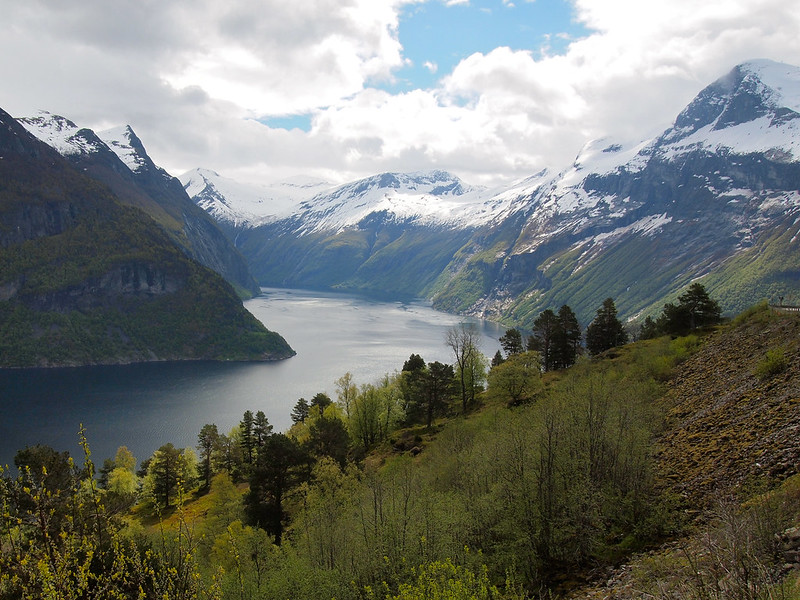 As of 2005, Geirangerfjord – along with nearby Nærøyfjord – was recognized by UNESCO as a World Heritage Site thanks to its incredible beauty.

I was understandably excited to see more of it. 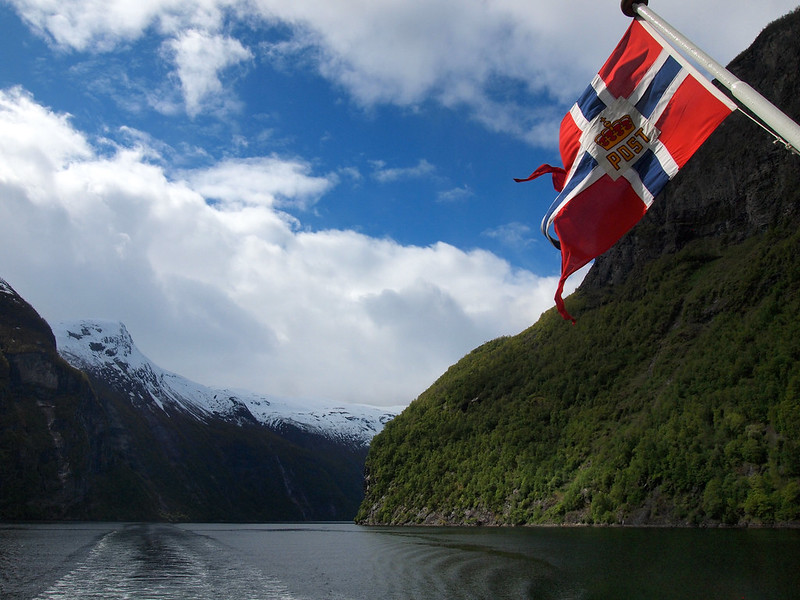 After I parked my car on the ferry, I headed up to the upper decks for the next hour of sailing 16 kilometers of the famous fjord. All the seats on the top deck were already claimed by the walk-on bus passengers by the time I got up there, but I ended up enjoying the ride much more by switching between the walkways on either side of the ferry. 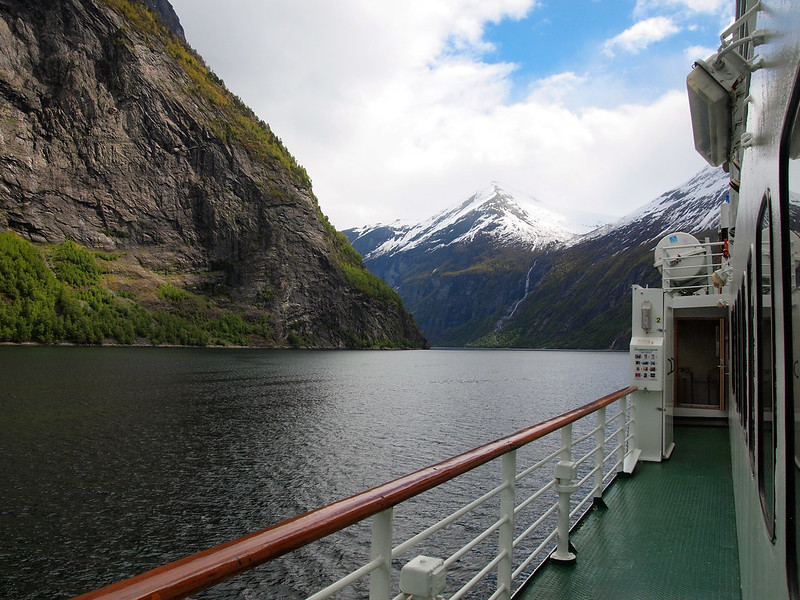 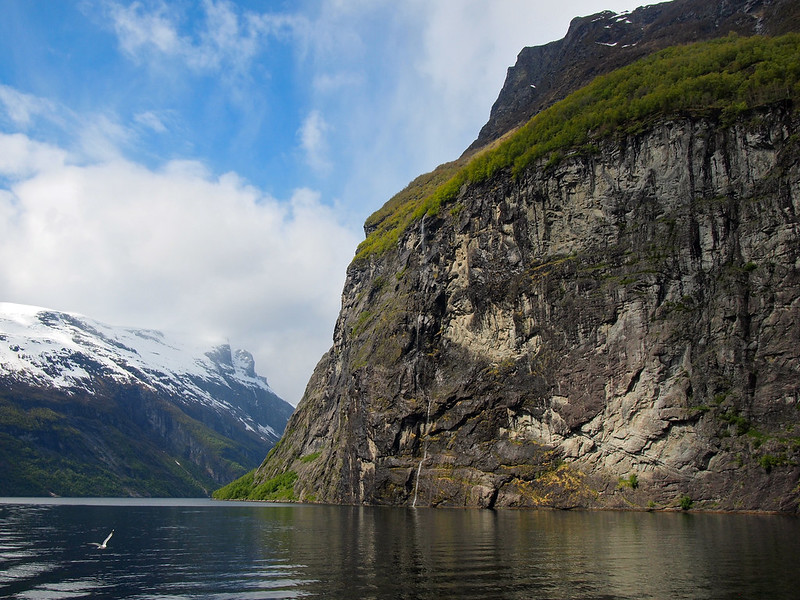 There's no denying that Geirangerfjord is gorgeous. It reminded me a lot of some of the fjords I've visited in New Zealand, with sheer cliffs, dark waters, and cascading waterfalls. 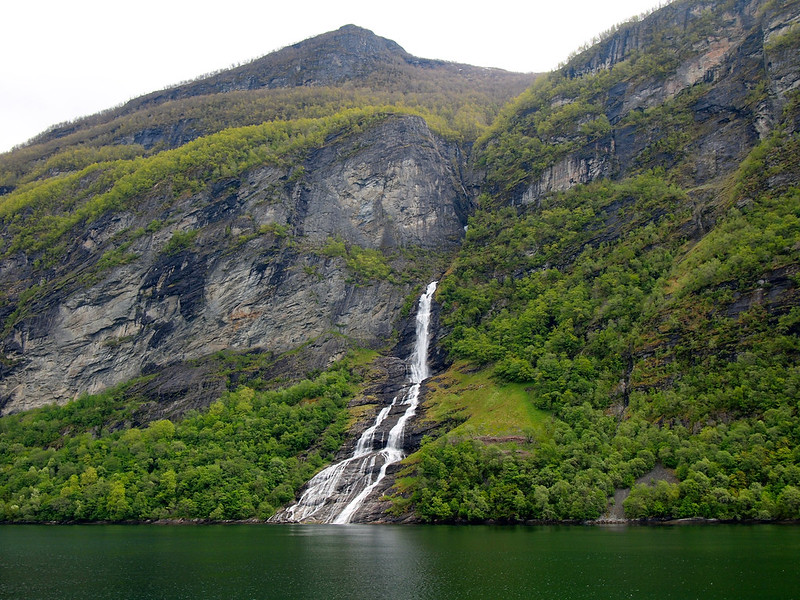 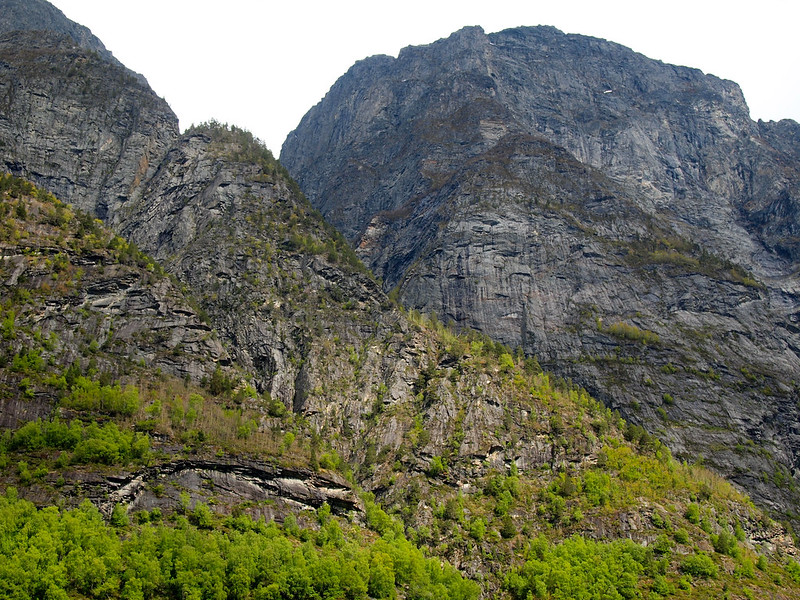 I was slightly put off by the fact that everyone on the top deck of the ferry spent almost the ENTIRE cruise buying french fries from the onboard cafe and throwing them to the seagulls following the boat, though. Because, you know, we've NEVER EVER seen SEAGULLS before OMG! (/sarcasm) 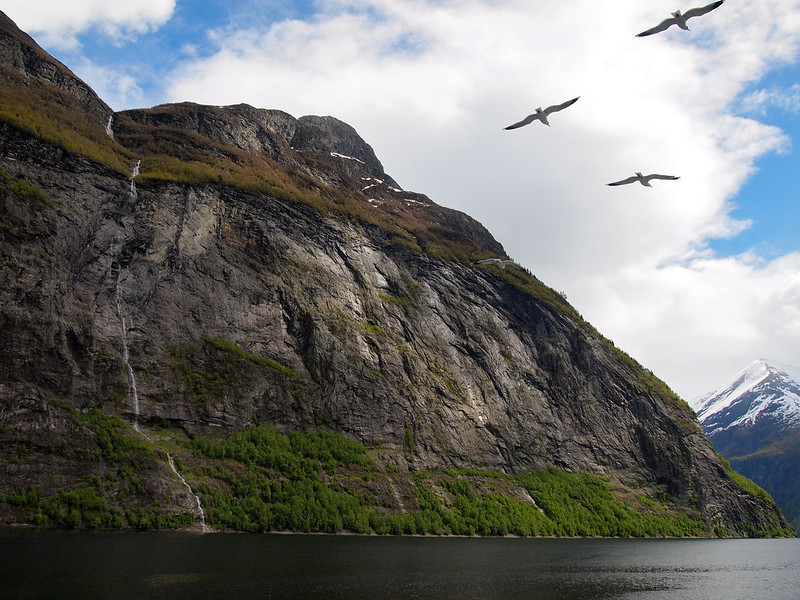 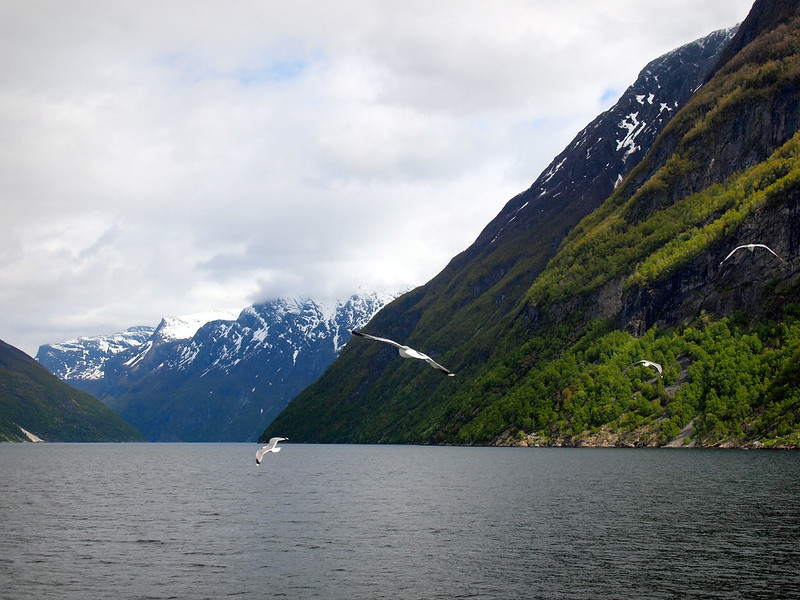 Thankfully the cruise was just the beginning of my adventure in and around Geirangerfjord. As much as I enjoyed sailing through the fjord (yes, even with all the squawking birds), the rest of the day just got better.

Things to do in Geiranger, Norway

My cruise into the tiny port town of Geiranger was just the start of my Norway fjord adventure. For the rest of the afternoon, I spent my time exploring everything Geiranger has to offer.

If you find yourself in this town for a day (perhaps off a cruise ship, since Geiranger is a popular cruise port), here are a few things you can consider doing:

Lunch with a view

First order of business once getting off the ferry in the tiny town of Geiranger: food! I headed up the winding roads above the fjord to Westerås Farm, a combination farmstay and rustic restaurant with some AMAZING views. My host, Ove, from the local tourism board recommended the goat to me, but I wasn't quite brave enough to try it (though, lo and behold, I ended up eating goat that night for dinner – and guess what? it was delicious!). 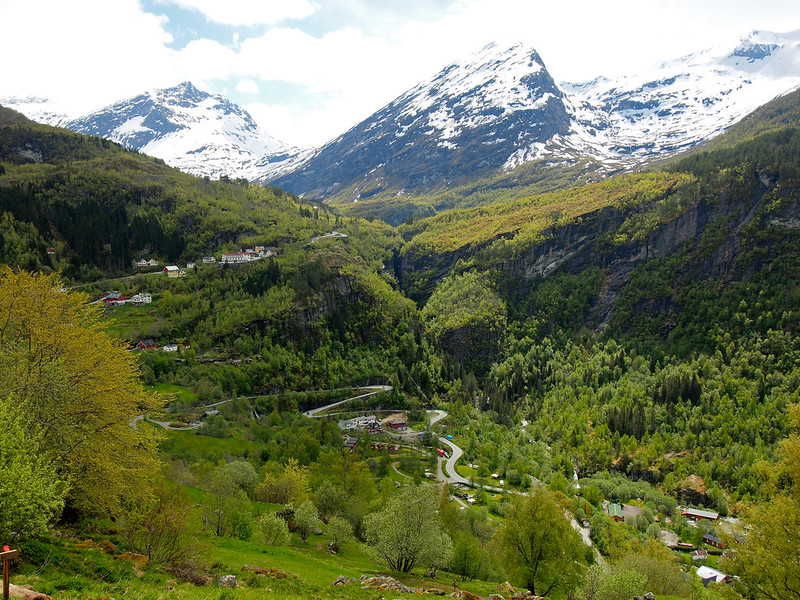 Whether you are hankering for goat or not, the views from Westerås Farm alone are worth visiting for lunch.

Yes, it's true I had a rental car for my time in Geiranger. However, my hulking Volvo station wagon was a little unwieldy on the narrow, twisting mountain roads surrounding Geiranger. So Ove and I traded my car in for a Twizy from eMobility Geiranger for a couple of hours.

This is a Twizy in case you haven't seen one: 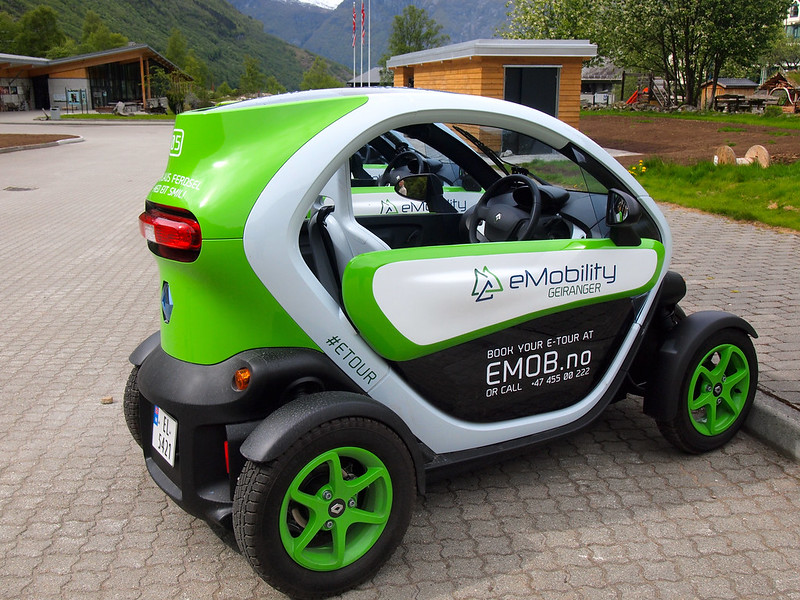 Basically it's the tiniest of electric cars with doors that open upwards. The company's slogan in Norway is “Travel without a trace – with a smile!” And that's exactly what we did. I had a smile plastered on my face and was laughing almost the entire time I was driving that tiny car. 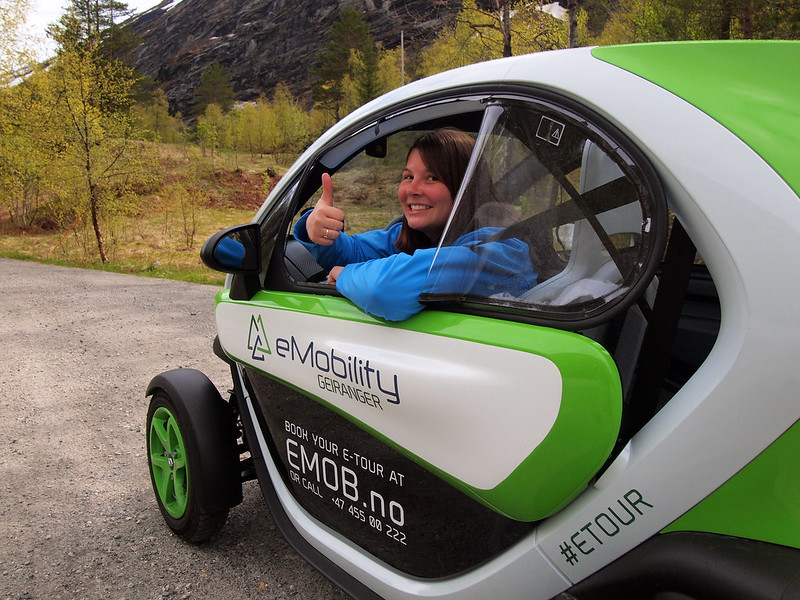 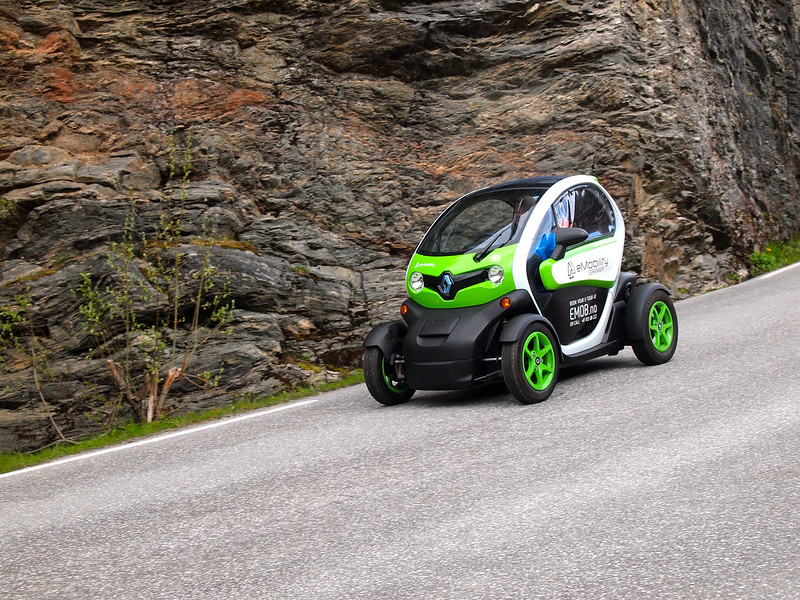 The way these work in Geiranger is pretty cool. You tell eMobility how long you want to rent a car for (it's 800 NOK or about $98 USD for an hour) and what you'd like to see. They then set you up with a GPS that also acts as a digital guide, sharing fun facts with you about the things you drive past.

Ove and I drove to “the Knot,” which you can't drive a regular car through, and stopped off at some of Geiranger's best lookouts along the way. 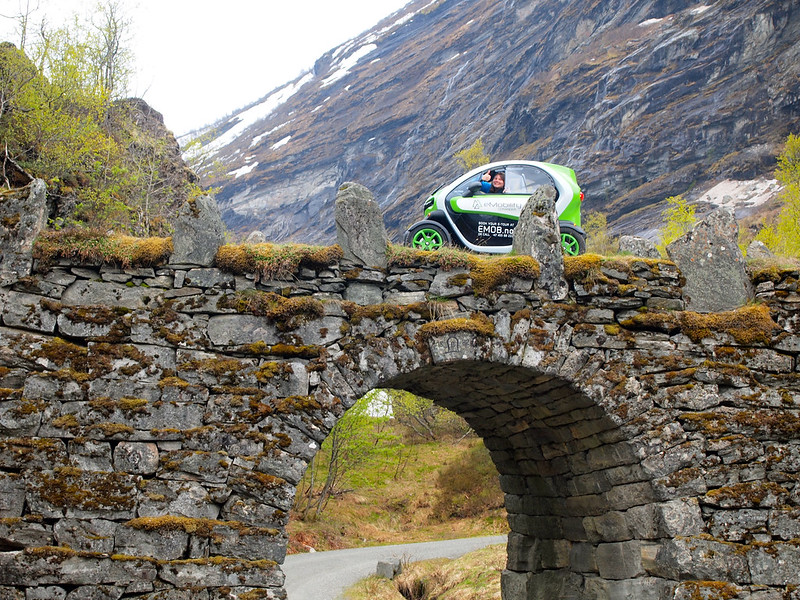 This would be a great option for cruise ship passengers stopping for a day in Geiranger.

Becoming Queen of the Fjord

Speaking of those lookouts, you really, really don't want to miss them. Namely Flydalsjuvet, where you can see one of the most famous views in Norway. 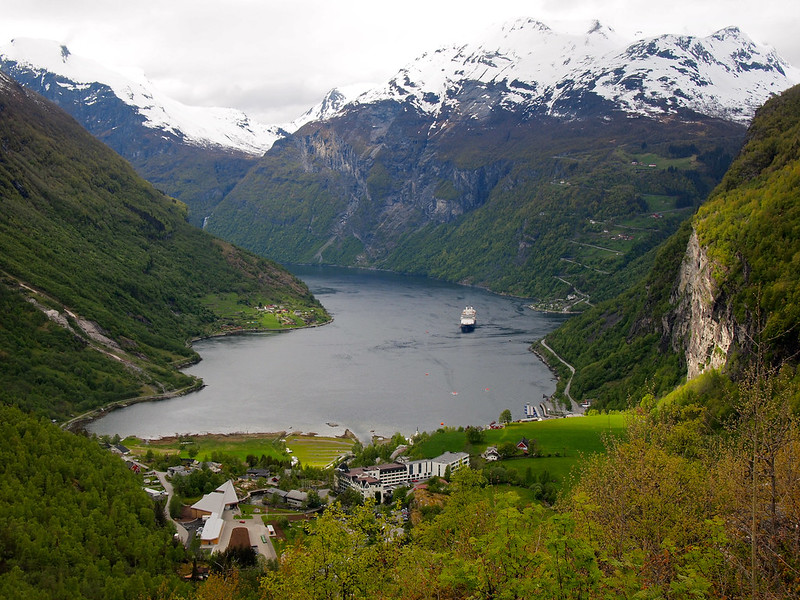 This lookout has two parts – an upper and a lower. The lower section is where you'll find an installation called “Fjordsetet,” also known as the “Queen's Chair” since it was unveiled by Norway's Queen Sonja in 2003. Best seat in the house, for sure. 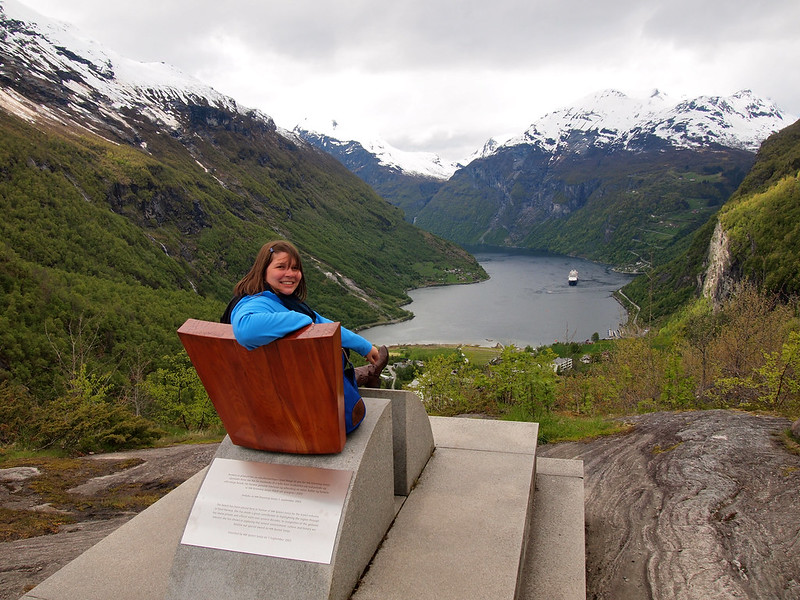 But I couldn't leave Geiranger without getting THE shot. You know, the one with me standing on top of a precarious-looking rock hanging high over the fjord?

This isn't an official part of the lookout (since, you know, danger), but Ove assured me that everyone hops over the 12-inch fence to take the photo anyway. In fact, he even helped me get my epic shots. 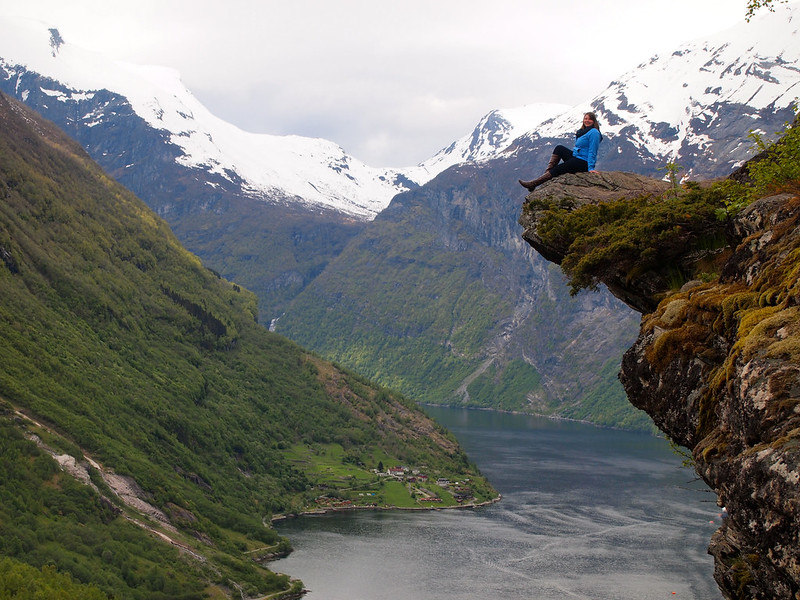 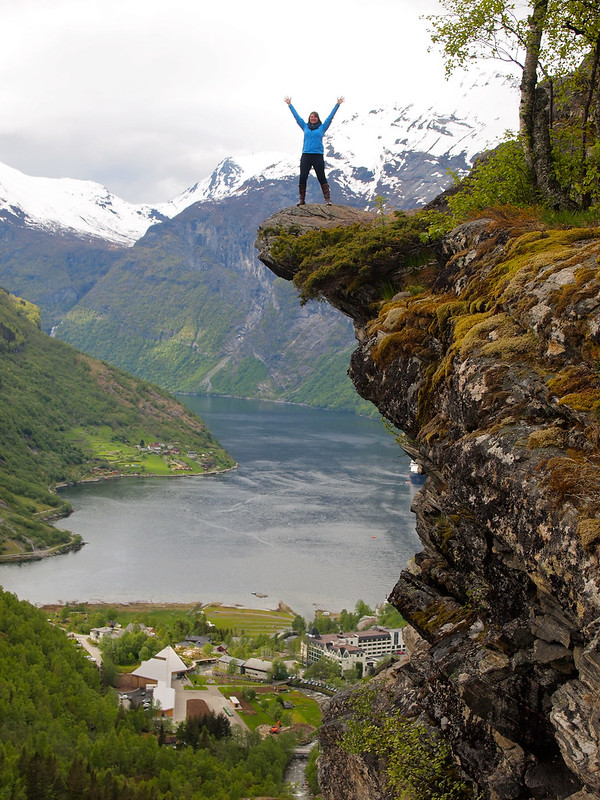 Our time in the Twizy had to come to an end, but I still had one more great view to see in Geiranger. I took my rental car (which now seemed even MORE huge in comparison to the minuscule electric car I'd just been driving around) up the Ørnevegen, or Eagle's Road. This is a stretch of Road 63 out of Geiranger that boasts 11 hairpin turns and a gain of almost 2,000 feet in elevation. 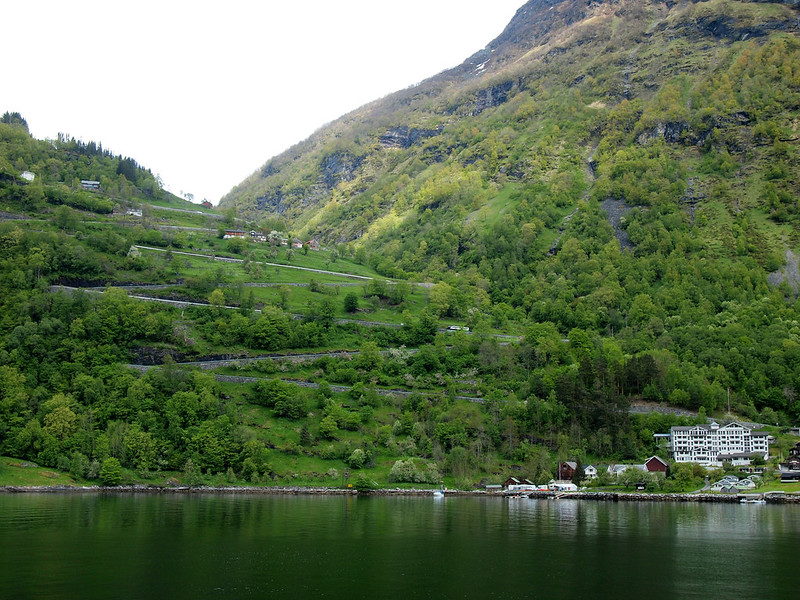 At the top, you'll find Ørnesvingen: Eagle’s Bend. I think this was actually my favorite view of Geirangerfjord because you really get a sense of just how BIG it is. 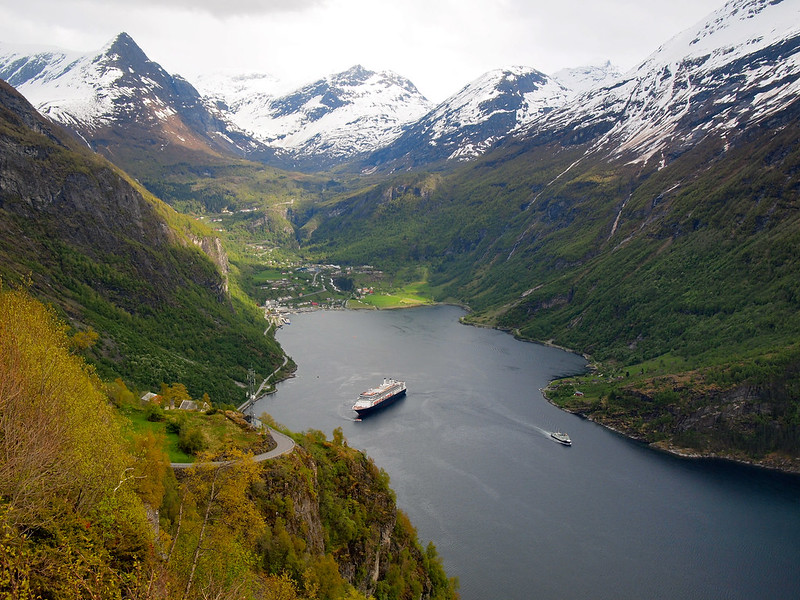 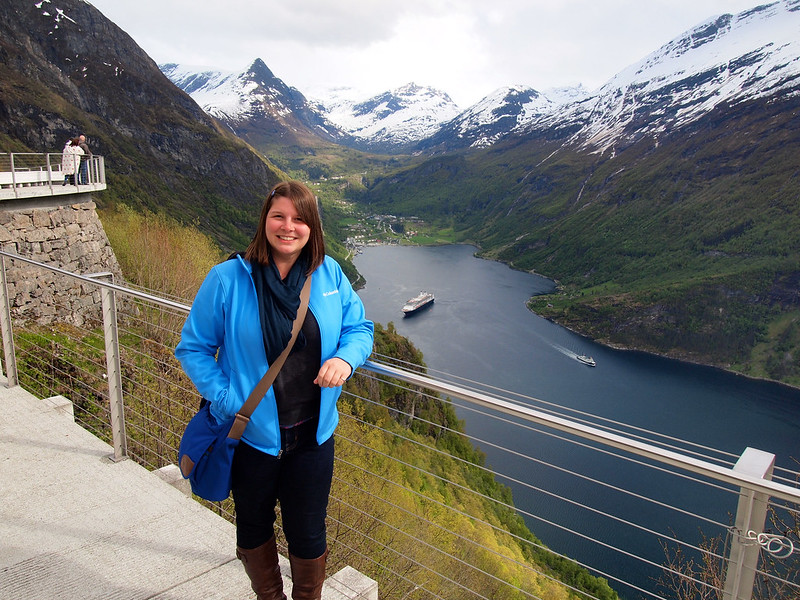 Plus, the few rays of sunlight peeking through the clouds didn't hurt, either. 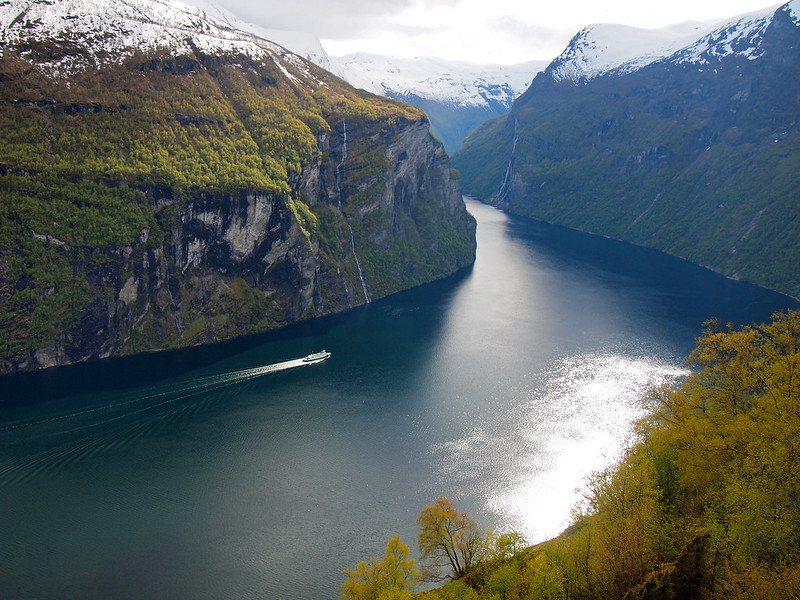 I honestly didn't know what to expect from Norway's most famous fjord. And, to be entirely truthful, if my adventure had ONLY included that bird-infested ferry ride, I may have left disappointed.

But, thankfully, there's plenty of cool things to do and see in Geiranger – and I'm really glad I stuck around to experience a lot of it! 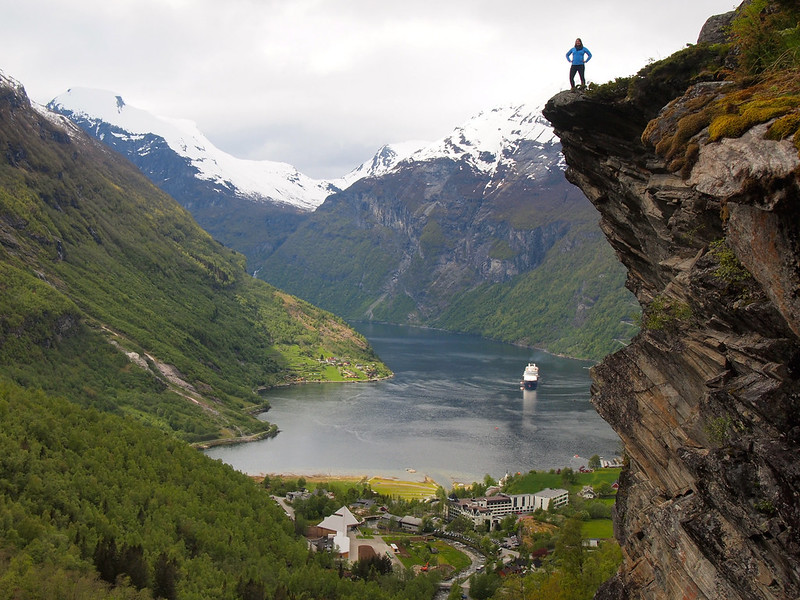 I didn't stay in Geiranger (though there ARE hotels there), and instead stayed in Norddal, a quiet little fjord town about 35 minutes away. I stayed at the Petrines Guesthouse, and was the only guest in the late May off-season. The guesthouse was lovely. It used to be an old folks home, but was bought (and is now run) by about 8 people from the local area, which I thought was really cool. The guesthouse also has a small restaurant, and it was here that I tried goat for the very first time! (It tastes a heck of a lot like chicken, in case you're curious.)

Who wants to go to Geiranger now? 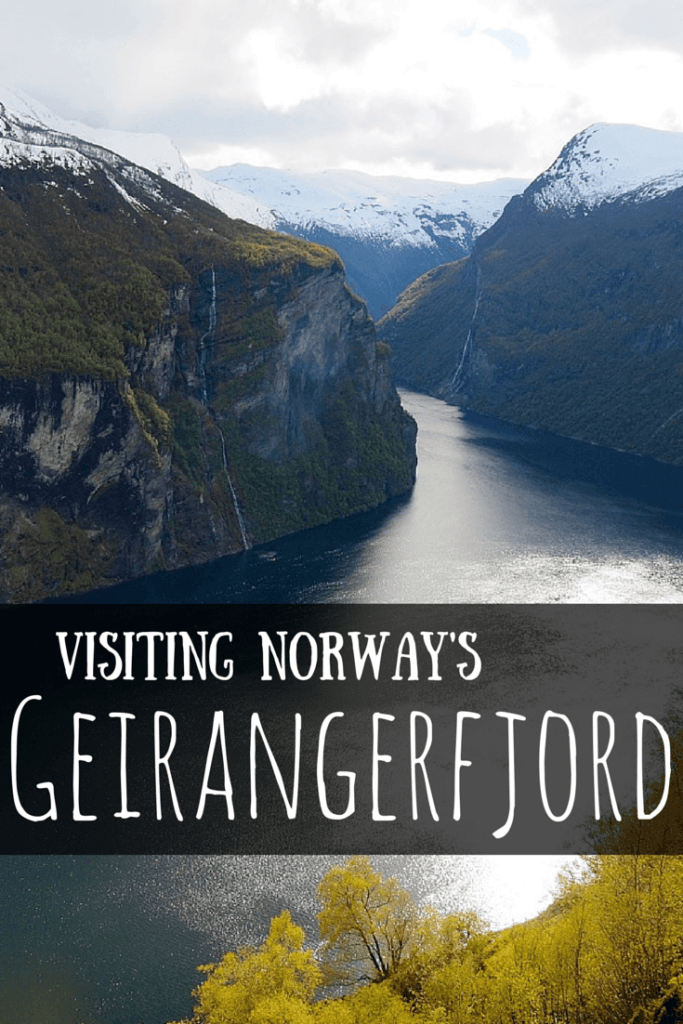 47 Comments on “The Most Famous Fjord in Norway”