Highlights of Belize and Guatemala

Note: This post contains affiliate links, which means if you book/buy something through one of my links, I may earn a small commission (at not extra cost to you, of course!).

What sorts of things do you picture when you think of Central America?

I'm asking because I didn't really know what to expect before I visited both Belize and Guatemala earlier this month on a tour with Intrepid Travel. Based on what the media had told/shown me about the region, I only thought of jungles and coffee and violence in association with Central America. And, to be fair, you WILL find those things there.

But Central America is more than what the media leads us to believe. In fact, both countries I visited were so different that it was amazing to me that they existed side-by-side within the same region. 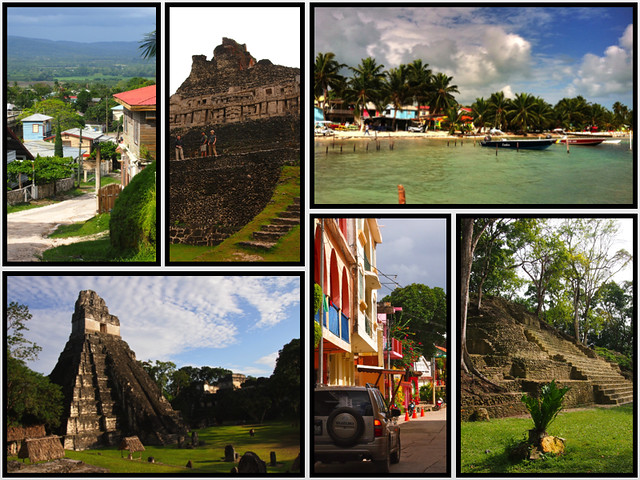 I visited Belize and Guatemala on an 8-day trip with Intrepid Travel, and was trying to figure out how best to describe my experience to you. Should I write a review? Share photos? Just jump right into all the individual posts I wanted to write?

In the end, I settled on a highlights video, along with some of my best photos from the trip. Check out the video below, and then read on to get a preview of what I did/saw on this adventure.

After a night in Belize City (which, in all honesty, isn't worth writing about), we began the real adventure with a stop at the Mayan ruins of Xunantunich, roughly 80 miles west of Belize City. Chaac, the Mayan rain god (whose image appears on some of the ruins at Xunantunich), was doing his job that day, greeting us with rain and mist at the site. This made it extra mystical, however, and we spent roughly an hour wandering around and climbing ruins. The tallest ruin here is called “El Castillo,” and is apparently the second-tallest structure in Belize. Climbing it gave us fantastic views out over the rest of Xunantunich, as well as the surrounding jungle. 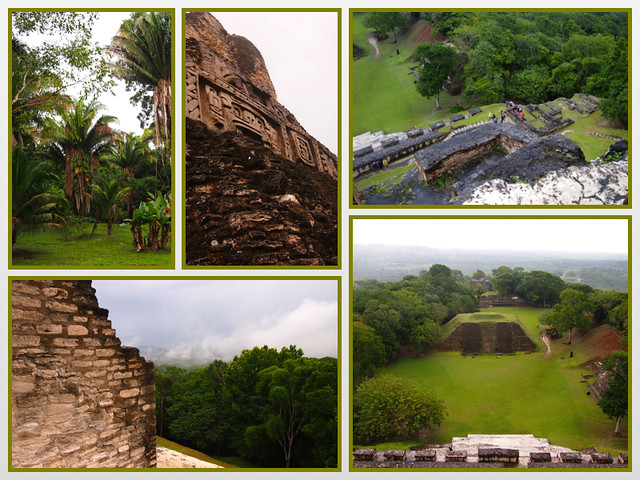 From Xunantunich, we made our way to the town of San Ignacio. The original plan here had been for us to sign up for all sorts of adventure activities (we were all hoping to go cave tubing), but heavy rain in the area canceled most of the trips. So, instead, we explored the colorful town. Highlights of San Ignacio were the fruit market and the snack stands across the street from our hotel, where all the locals would go for tacos and panades for lunch. 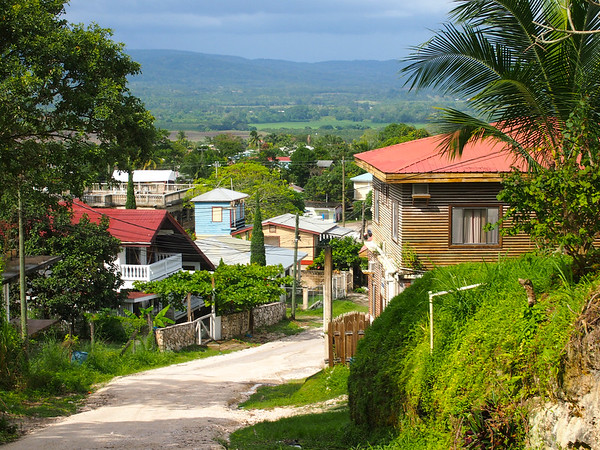 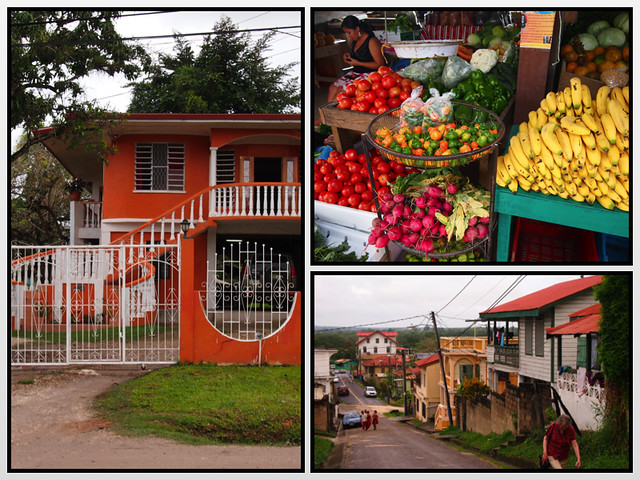 From San Ignacio, we also walked to the Mayan ruins of Cahal Pech. This site, which dates back to roughly 1,000 BC, was very different from Xunantunich. Cahal Pech was once a hilltop residence for an elite Mayan family, and this was reflected in the various ruins to be seen and explored. There were so many narrow passages and hidden staircases here that we were all like little kids on a new playground. 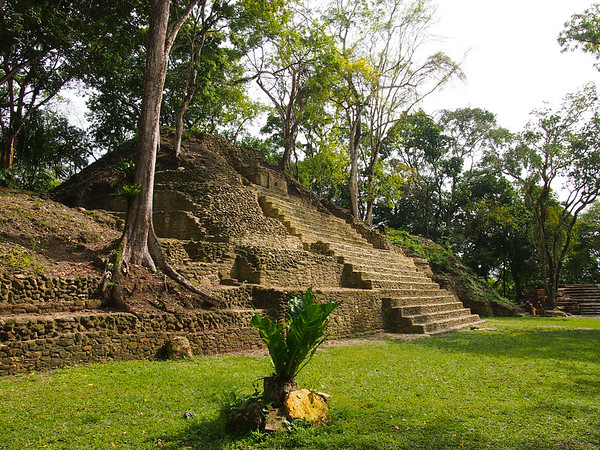 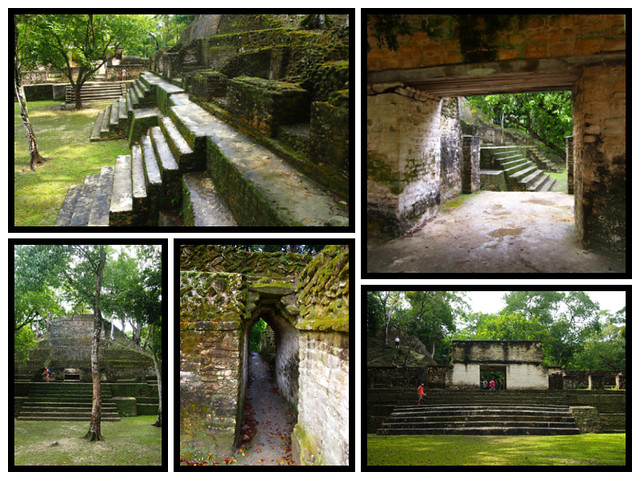 The next day we crossed the border into Guatemala, which was surprisingly quite a change from Belize. Even though the countries share a huge border, they are quite different — the biggest difference being that, in Belize, everyone speaks English, while Spanish is the main language of Guatemala. We stopped briefly in the small island town of Flores for lunch, where I absolutely fell in love with the colorful buildings and red tuk-tuks zipping down the narrow streets. 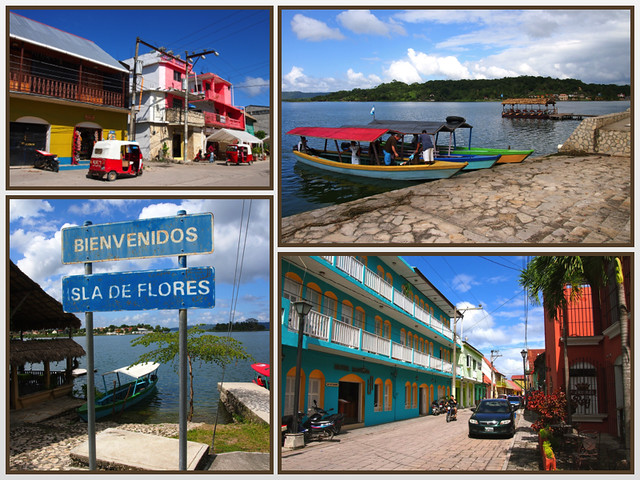 We didn't stay longer in Flores because we were headed to the amazing Mayan ruins of Tikal. You'd think that by this point we'd be ruined-out — but not so. We picked up a guide near Tikal National Park, and spent a few hours exploring the sprawling site. At one point, Tikal was akin to the capital of the whole ancient Mayan empire, and you can tell by the tall temples and the knowledge that only a tiny, tiny fraction of this site has been uncovered — most of it has been reclaimed by the jungle. We ended our visit to the Tikal ruins by climbing Temple IV (the only ruin you are still able to climb here) at sunset. 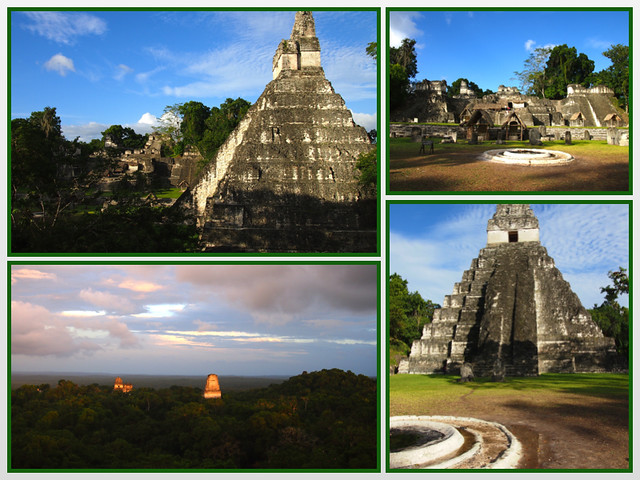 Camping in the Jungle

That night, we camped at Tikal. Yes, camped! In the jungle! The stars above our campsite at night were phenomenal, and I stayed up late to gaze at them with the rest of the group, despite the fact that I was battling a terrible flu. The next morning, we were woken up insanely early as the jungle began to come alive. Parrots, howler monkeys, and coatimundi were our alarm clocks. 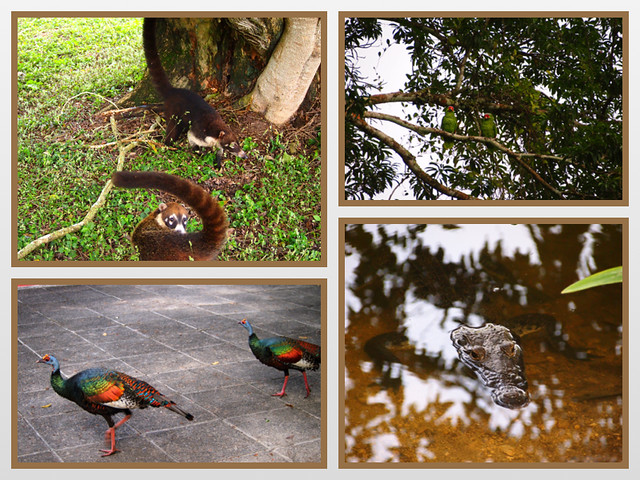 After we bid our furry and feathered friends farewell, we headed back over the border into Belize and made straight for the ferry port in Belize City. Because the last portion of our trip would take place on one of Belize's islands — Caye Caulker, to be exact. This island is how I will remember Belize, I think — a strong Caribbean influence and a relaxed pace of life. 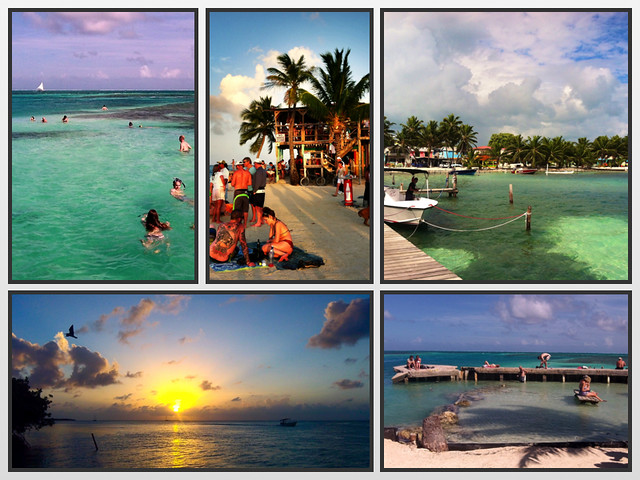 The highlight (for me, at least) of our time on Caye Caulker was the full-day sailing/snorkeling trip we did with Raggamuffin Tours. Our group had a sailboat all to itself and we spent the day alternating between swimming with fish, sharks, and turtles and jamming to reggae music and drinking rum punch on the boat. If I could do this once I week, I totally would. 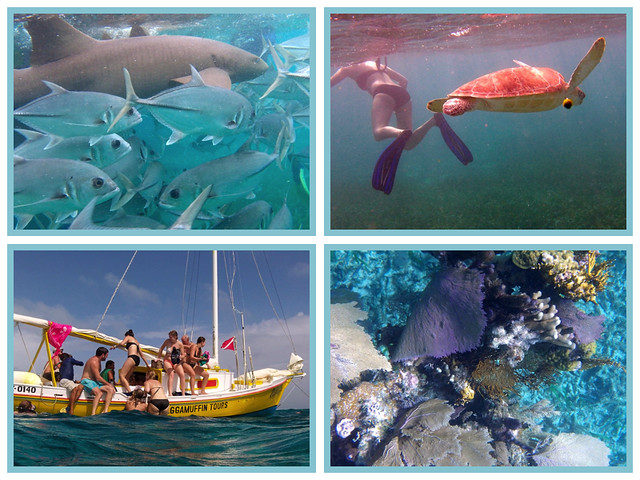 I'd be remiss if I didn't mention the food on this trip, too. Rice and beans and seafood were the dishes of note in Belize, including tons of fresh lobster on Caye Caulker. 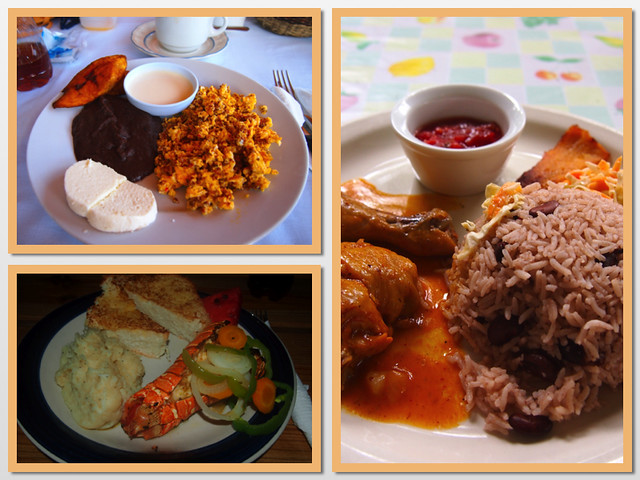 And, lastly, this was a small-group tour (check it out here). There was a nice mix of people — a few couples, a few nationalities, and all ages. We all got along pretty well, and usually spent the evenings together grabbing drinks or chatting over dinner. This is definitely a benefit of going on a group trip as a solo traveler — you get to meet new people who love traveling and automatically have someone to hang out with if you want to. 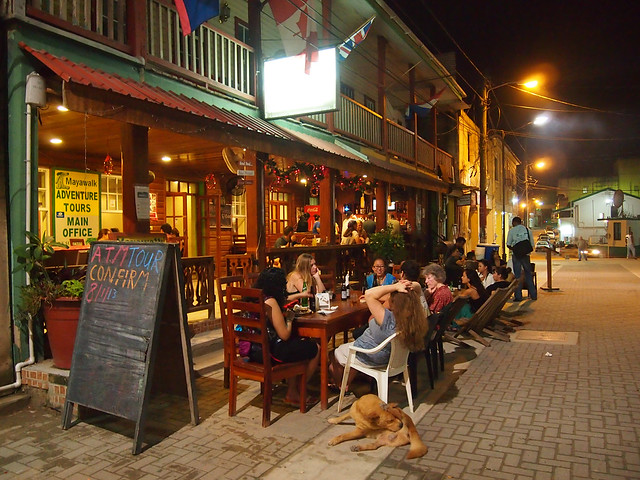 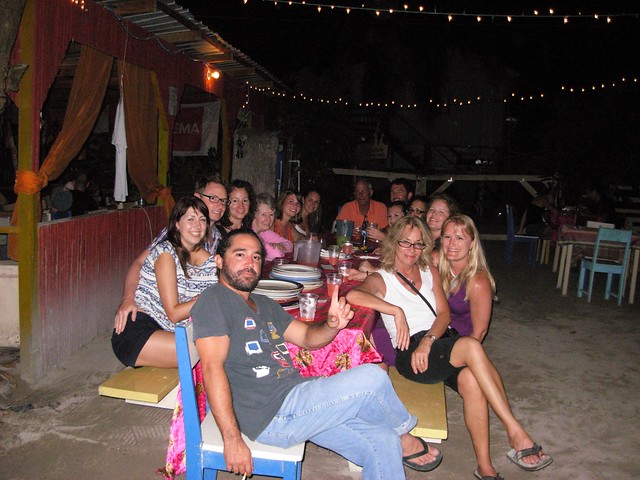 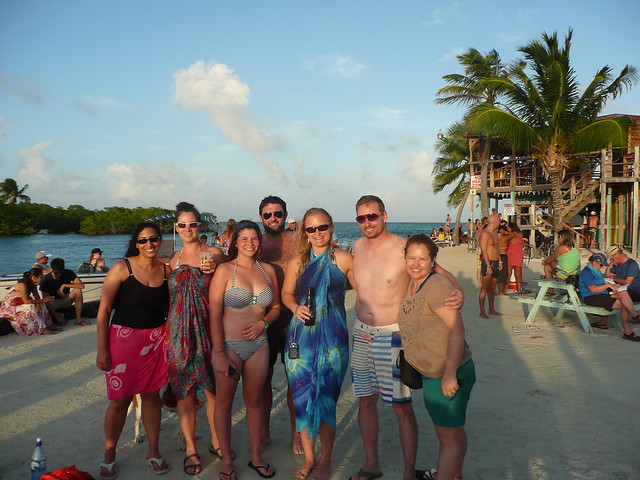 Overall, I would definitely recommend this trip as a great introduction to Central America, with a focus on Belize. It's a great mix of adventure and relaxation, and having a guide is really indispensable!

Check out all the posts I wrote about this trip:

Which parts of this trip are you most interested in reading more about?

*Note: This was a complimentary “Land of Belize” tour with Intrepid Travel. As always, though, all opinions are 100% my own.

59 Comments on “Highlights of Belize and Guatemala”