Highlights from 7 Days in Iceland in Winter

Home » Europe » Iceland » Highlights from 7 Days in Iceland in Winter

When I started telling people that I was going back to Iceland for a second time in the winter, someone asked what I had against the Land of Fire and Ice in summer. And, the truth is, I have nothing against Iceland in the summer – in fact, I have dreams of driving the Ring Road under the midnight sun, chasing puffins, and not having to wear multiple layers when going outside. Iceland in summer would be fantastic.

But Iceland is pretty awesome in the winter, too.

Sure, the daylight doesn't last very long (especially during December and January), and the temperatures drop to around freezing. The weather often isn't the greatest, either – rain, snow, and sleet alternate with fitful bouts of sunlight, especially in November.

But there are things to do in Iceland in winter that you just can't do other times of the year. Like explore ice caves and snowmobile on glaciers and search for the Northern Lights.

And so I was tempted into a second winter trip to Iceland, and decided to drag Elliot along with me.

RELATED: A 10-Day Itinerary for Iceland in Winter (Without Renting a Car) 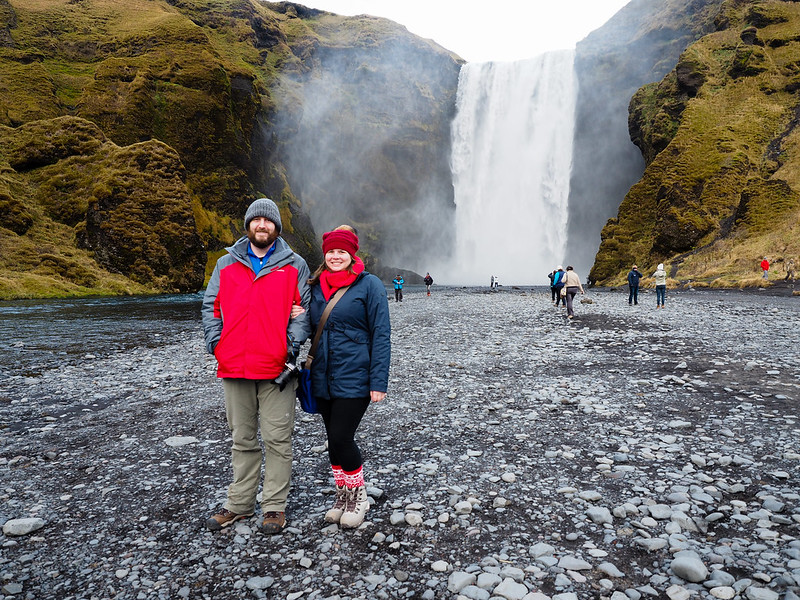 As it turns out, I STILL have not seen the Northern Lights in Iceland, and my dreams of spelunking in brilliant blue ice caves didn't quite come to fruition, either. But you know what? My second winter trip to Iceland was still amazing enough that I'm already plotting a third in my head.

Here's what Elliot and I got up to in a week in Iceland. 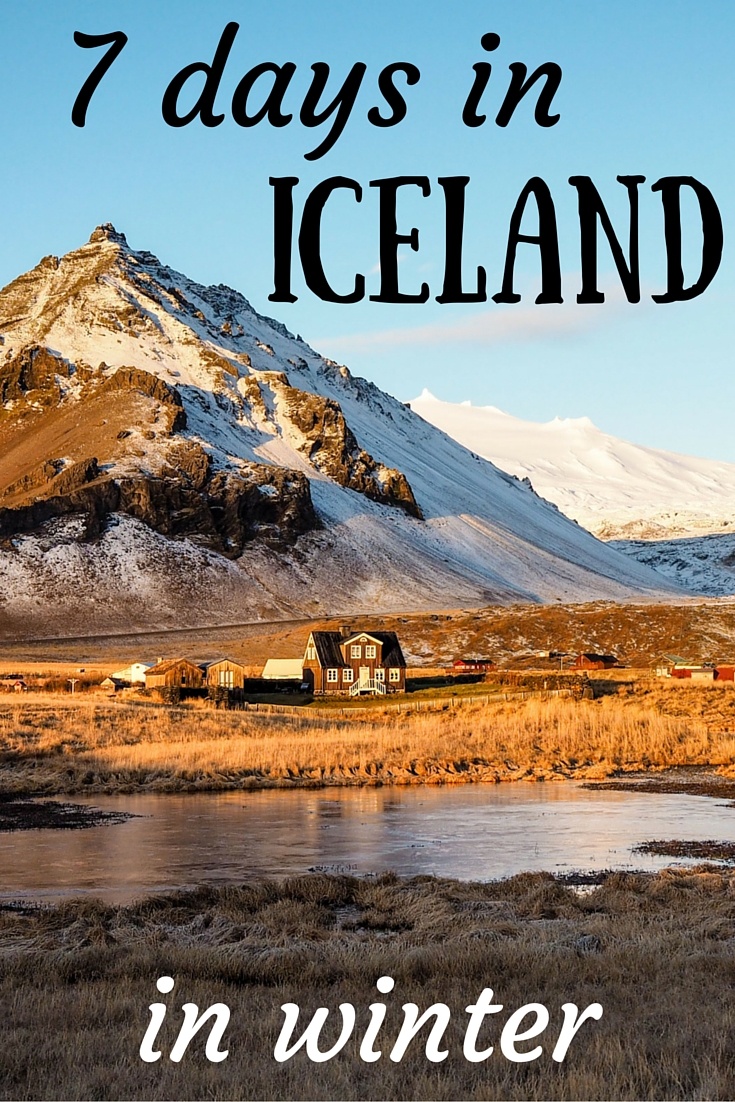 Yes, it's super touristy. And no, it's not even natural. But damn if the Blue Lagoon isn't awesome. This spa between Keflavik Airport and Reykjavik is one of the top attractions in Iceland, and Elliot and I went straight from the airport to the Blue Lagoon for a few hours of relaxing in the hot water after our overnight flight from Boston. This ended up being the most brilliant idea – we wouldn't have been able to check into our apartment in Reykjavik anyway, and this way we were able to relax and stretch our stiff limbs as we watched the sun rise over the lava fields. 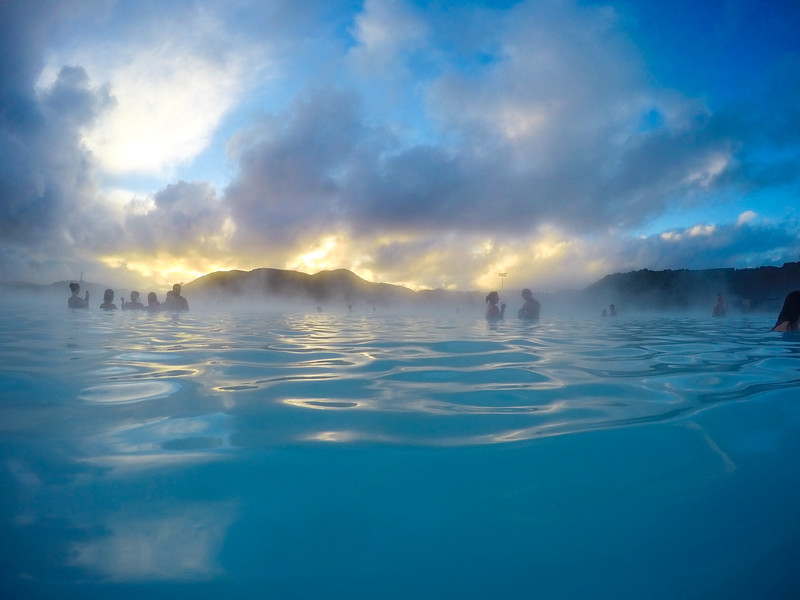 Visiting the Blue Lagoon on the way to/from the airport is easy to do – you can get a bus ticket that includes a stop at the Lagoon, and they even have on-site luggage storage.

After kicking jetlag's butt, we were picked up on Day 2 in Iceland by Extreme Iceland for two days of exploring the Snaefellsnes Peninsula north of Reykjavik. The first day of this trip included stops at viewpoints along a fjord, one of the most powerful hot springs in the world (that can literally burn your face off), and Hraunfossar – a series of waterfalls that flow out from beneath a lava field. 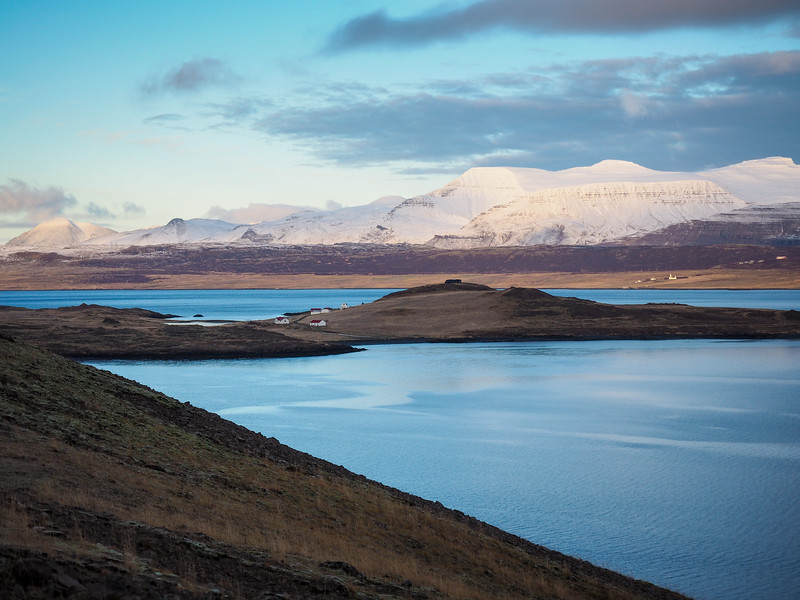 We ended the day by watching a pretty spectacular sunset from the Gerðuberg basalt columns.

The second day was spent on the peninsula and included a bit of light hiking. First, we climbed into “the Crack,” also known as Rauðfeldsgjá Gorge, as the sun rose and lit up the surrounding mountains and lava fields in an unreal shade of orange. 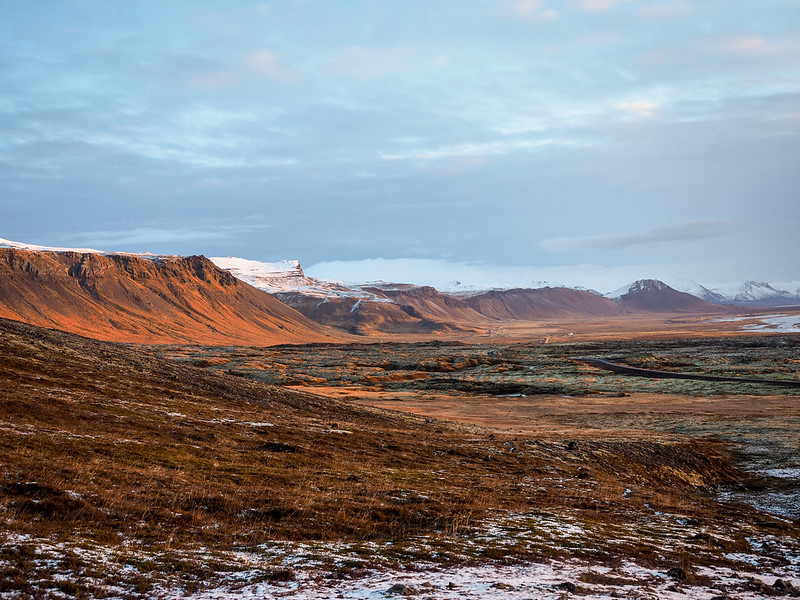 Next we headed to the small fishing village of Arnarstapi and walked the 2.5-kilometer coastal path to Hellnar. Filled with epic views of the coast and a few scrambles over lava rocks, this may have been the highlight of this trip to Iceland for me. (The great weather didn't hurt, either.)

We then made a stop at Vatnshellir lava cave in Snæfellsjökull National Park for some cave exploring, followed by a stop at Djúpalónssandur, a black sand beach.

The sightseeing was supposed to end with a stop at Kirkjufell, a very famous mountain on the north side of the Snaefellsnes Peninsula, but the weather caught up with us and the mountain was shrouded in sleet and clouds by the time we got there. After everything we'd seen and done on the peninsula, though, I was much less disappointed than I expected to be!

The next day, I somehow convinced Elliot put on four layers and a dry suit and jump into 37-degree water with me. Crazy? Probably. Awesome? You bet. 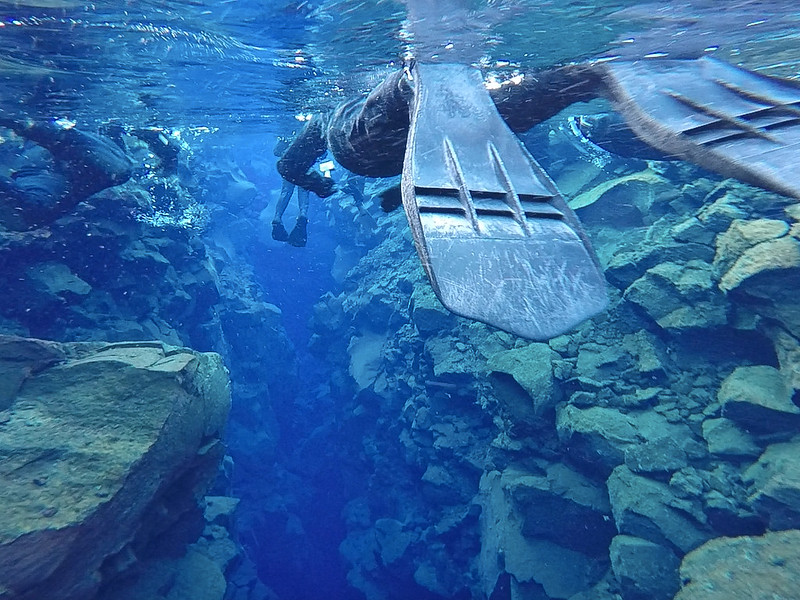 You see, there's an incredibly unique formation in Iceland's Þingvellir National Park. Here, two of earth's tectonic plates (The North American and European plates) are slowly drifting apart. Part of this drift is happening beneath the surface of a lake, and you can actually go snorkeling or diving IN that rift, called Silfra. 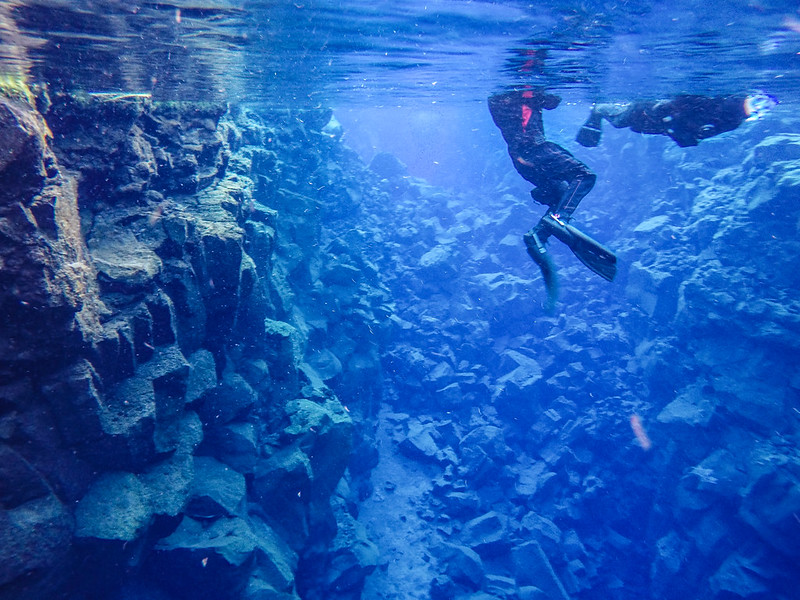 This was something I didn't do on my first trip to Iceland, and I knew I HAD to do it this time. It was cold, yes, but it was also incredible to see that clear blue water and know that we were swimming between tectonic plates. SO COOL. We went with DIVE.IS, who I would highly recommend – their crew was so fun and friendly.

One of the reasons we (okay, I) decided to go to Iceland in November was because I really wanted to see the ice caves that form beneath Vatnajökull, Iceland's largest glacier. In the winter months, you can often explore these gigantic caves filled with blue ice. So we booked a two-day trip with Goecco, a small tour company based in Reykjavik.

The trip was fraught with mishaps, from a blown tire to a freak windstorm that caused us to have to change accommodations in order to not have to drive across the volcanic desert in 60mph winds, but I was super impressed with our guides and how they handled it all (more on this later).

Since we had more time on the South Shore than usual, we stopped to see ALL the waterfalls (including Seljalandsfoss, Gljufurarfoss, and Skogafoss), a plane crash site, and a black sand beach just before dusk.

The next day, we began at Jokulsarlon, the famous glacial lagoon with Vatnajökull in the background.

The plan after that was to visit one of the ice caves beneath the glacier. The cave that is the most accessible (and possibly the most beautiful) was sadly still filled with water, and it took us a couple of tries to find another one that everyone in our group could access by walking across the top of the glacier.

The glacier walk and climbing down into a small black ice cave was certainly cool, don't get me wrong, but I'll be forever dreaming of that big blue ice cave until I go back someday!

Lastly, Elliot and I spent some time wandering around Reykjavik. The great thing about this city is that the downtown area is totally walkable. So walk we did.

We walked along the shore to the Sun Voyager sculpture as hints of sunrise still colored the sky. We walked to Hallgrímskirkja and went to its bell tower for a great view out over Reykjavik. We walked down to the Harpa opera house to see the sun glinting off its glass panes. We walked to the frozen lake to laugh at the swans trying to walk on the ice. And we just walked the streets, looking for street art and friendly kitties and good coffee and hot dogs.

Reykjavik is a great city to spend a weekend in – check out this post about it! 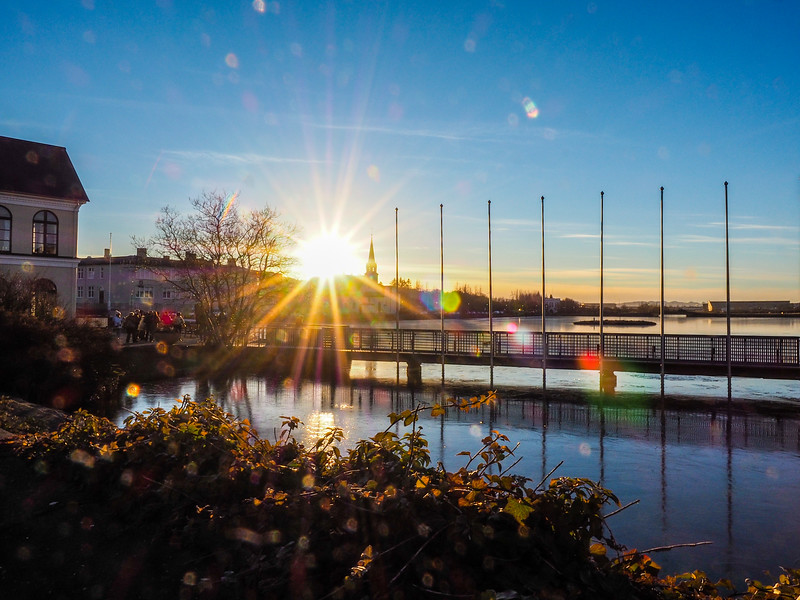 Once again, I was really sad to wave goodbye to Iceland. The Land of Fire and Ice has definitely become a country that I will keep returning to.

Ice caves and Northern Lights… I'll be back!

Want a more detailed itinerary? Check out this post: A 10-Day Itinerary for Iceland in Winter (Without Renting a Car)

Thinking of planning your own winter trip to Iceland? Here are a few tips:

How to get there: Iceland is just a 4-hour flight from the East Coast of the US, or about 3 hours from the UK. There are multiple airlines that fly there, with Iceland Air and WOW being two of the most popular (and often the most affordable).

Where to stay: Reykjavik is the best base in the winter, since most tours start and end there. I recommend the Rey Apartments for both location and coziness (plus, having a small kitchen helps cut down on food costs!).


What to pack: Essentials include silk leggings and a thermal shirt, warm socks like Heat Holders, a waterproof outer layer (I like my Columbia ski pants), and some winter hiking boots. Check out my complete Iceland packing list for more suggestions!

Which part of this Iceland trip would you most like to read more about?

*Note: This post was brought to you by Guide to Iceland.

85 Comments on “Highlights from 7 Days in Iceland in Winter”