It's that time of year again – the time when people travel to the far northern reaches of the world in hopes of seeing the elusive aurora borealis; the Northern Lights.

I've been on a couple Northern Lights-seeking missions in the past few years. In Iceland. In Canada. In Arctic Norway. Not all my forays have been successful (I've yet to see them in Iceland despite two separate winter trips there), but I've learned a lot about this phenomenon along the way.

And that includes learning all the things that people tell you about seeing the Northern Lights that just aren't true.

There are plenty of myths surrounding seeing the Northern Lights, and I'm here to dispel a few of them for you.

In simplest terms, the aurora borealis is a phenomenon that happens in the night sky. The “Lights” are caused by charged particles given off by the sun during solar storms interacting with the gases in earth's atmosphere.

Here are some quick, fun facts about them:

9 lies people tell you about seeing the Northern Lights

Don't listen to the following myths about seeing the Northern Lights:

1. You won't see the Lights for the next several years

At the end of 2015, a frantic rumor was circulating around on the internet that the Northern Lights were going to disappear for the next decade or so. Countless news outlets reported that it was your “last chance” to see them for the next ten years.

This simply isn't true. What IS true is that the aurora is affected by solar activity and more or less follows an 11-year solar cycle. But they can't just be “turned off.”

So, while it's predicted that the Lights may not be as bright or appear as frequently as they have in the last couple of years until the peak of the next solar cycle (which will be 2024-2026), it absolutely does not mean that you will have to wait until then to see them.

2. The Lights are only visible in the winter months

Winter is a popular time to see the Northern Lights, but that doesn't actually mean it's the only time of year that you can see them. The aurora borealis is not a seasonal phenomenon; it occurs based on solar particles interacting with the gasses in our atmosphere – and this literally happens year-round.

You usually can SEE the Lights best in the winter months simply because those months have more hours of darkness per day, and darkness is one of the necessary conditions for seeing the aurora.

Ask any northerner, though, and they'll tell you that they will sometimes spot the Lights at night as early as August each year, and into April the next. (September through March is generally regarded as Northern Lights “season” in most places.)

Check out these other Northern Lights-related posts:

3. You can't see the aurora if the moon is shining

The best conditions for seeing the Northern Lights include a few key factors: Mainly dark skies, and very few clouds. And, usually, the less light pollution in the sky, the better. This leads many people to profess that you won't see the aurora if the moon is shining brightly.

While it's true that a full moon can dim the Lights a bit, it certainly doesn't negate your chances of seeing them entirely.

In fact, one of the best Northers Lights shows I've seen yet was on a night that included a bright almost-full moon in Norway.

Along a similar vein, many people assume that since aurora “conditions” require clear, dark skies, this means that clear, dark skies will always produce a Northern Lights show. I wish I could say this was true, but it unfortunately isn't.

Sky conditions have nothing to do with the aurora borealis (remember, the Lights are caused by solar particles interacting with elements in our atmosphere). The chemical reaction that happens up there in the sky happens regardless of cloud cover – we just can't see it happening when it's too cloudy.

I've seen the Northern Lights on cloudy nights AND clear nights – and I've also failed to see them on both cloudy nights and clear nights. You'll of course always have a better chance of seeing them if the skies are clear, but don't always count on it!

A lot of independent travelers turn their noses up at guided tours, insisting that doing their own thing always leads to better experiences. While this may be true in many cases, I really don't think it applies when it comes to the Northern Lights.

In order to see and truly appreciate this natural wonder, you really need to be with someone who knows a bit about “chasing” the Lights. Someone who can puzzle out the weather forecast, read the KP index, and understand when you should stay put and when you should move on to a different location in hopes of catching a Lights show.

Plus, guides generally have friends who are also guides, and many of them talk when out hunting the aurora. Which means that if there's a good sighting elsewhere, chances are your guide will hear about it (and then hopefully take you there).

I'm not saying that you CAN'T go Northern Lights chasing on your own – of course you can. But if you want the best chance of seeing them (and want to learn a bit more about them, and potentially even get some photography tips), I highly recommend booking a guided tour.

Northern Lights guides are usually huge fans themselves, and will do everything possible to make sure you have the best chance of seeing them. (For those who are tour-averse, simply look for ones that advertise small groups instead of big coach buses.)

6. If tours are running, you'll see the aurora

My tour recommendation comes with a caveat, though: just because tours are running on a particular night in no way guarantees an aurora sighting.

Most companies will cancel tours if the weather forecast looks terrible (i.e. completely cloudy skies with little chance of a break), but they can never guarantee a sighting in good weather (natural, scientific phenomenon, remember?).

It's of course more *likely* that you'll see the Northern Lights on a night that various Lights-chasing tours are running, but never consider it a guarantee. (I've been on two Northern Lights tours where we never saw anything; many companies will let you re-book on a second night for free if this happens to you.)

7. You should always plan around the Kp-index

The Kp-index (officially the Planetary K-index) is essentially the closest thing to a Northern Lights forecast that we have. It measures geomagnetic storm strength on a scale of 0 to 9, and the numbers correspond to the strength (and brightness) of any possible aurora.

The higher the Kp-index number, the better the chance of a good aurora show.

8. You don't need a good camera

If the aurora is strong enough, you WILL be able to see it with your naked eye with no question about what you're looking at. But when the aurora is weaker, it's sometimes tricky to differentiate between wispy clouds and the Northern Lights.

A good camera, however, can pick up a lot more light and color than our human eyeballs can at night. This is why you do really want a good camera with you if you're going to be chasing the Northern Lights.

A “good camera” doesn't need to be super expensive, though. Ideally, it needs to be one with a manual mode so you can set your shutter speed (how fast a photo is taken) and aperture (how much light is let in) on your own.

A slow shutter speed (anywhere from 5 to 30 seconds) and small aperture (the lower the number, the better) are what you're going for – and you'll want a tripod to put your camera on in order to avoid camera shake.

I've shot the Northern Lights with an Olympus PEN E-P2 and an Olympus OM-D E-M5 Mark II, and got photos I was happy with both times.

RELATED: Tips for How to Photograph the Northern Lights

9. They will look just like they do in all the photos

Hopefully if you've made it to this part of the post, you'll already know that this isn't true. So many factors go into a Northern Lights “show,” and no two nights are ever the same.

One night you may get an amazing, strong, and long showing of the aurora, while the next you may get nothing more than a dark sky. Some nights you'll be able to see greens and reds with the naked eye, while other nights you'll struggle to see any color at all.

There's no guarantee that the Northern Lights you see will look anything like all those amazing photos you've seen online – but I would still recommend going, because there's of course never any telling what you WILL see!

One Truth about the Northern Lights

The one truth people will tell you about seeing the Northern Lights is this:

Once will never, ever be enough.

Once you've caught that aurora borealis bug, prepare to always want more. I've been out with people who have been Lights-chasing for decades, and they're always still so excited when that first hint of green dances across the sky.

The Northern Lights may not *actually* be magical, but they certainly can work like magic on people who see them.

Is seeing the Northern Lights on your bucket list? Or have you seen them yourself and discovered any of the “lies” on this list? 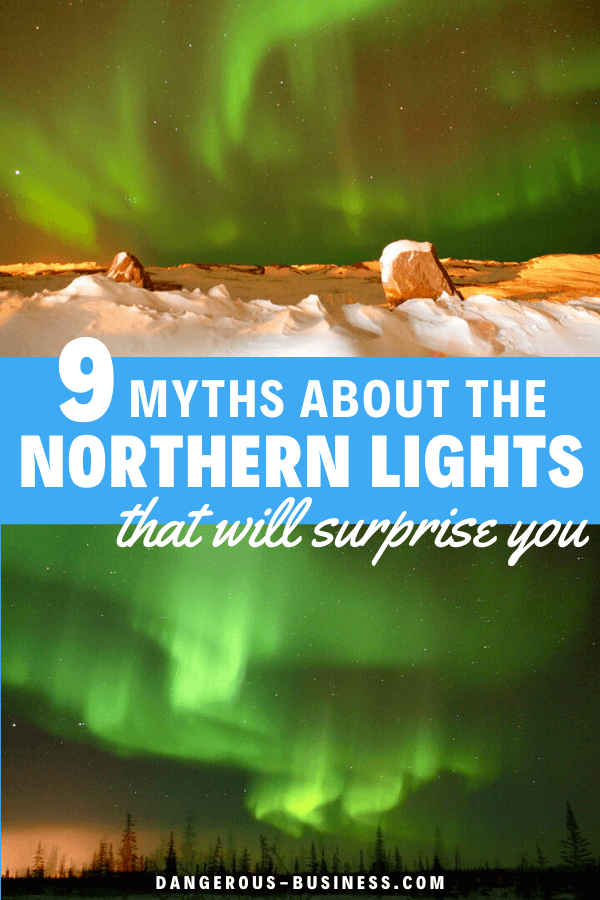