A Travel Itinerary for 10 Days in Norway

Home » Europe » Norway » A Travel Itinerary for 10 Days in Norway

Before going to Norway, I had a few preconceived notions about the country: One, that it was expensive. Two, that everyone was tall and Viking-like. And three, that it was full of incredible landscapes.

These things were all proven to be (at least partially) true. But I learned so much more about the country while I was there. I learned about its government, healthcare, and social system. I learned that its Viking-like people are incredibly friendly and fluent in English. I learned that it has some awesome cities outside of Oslo. And it learned that it's actually even prettier in person. 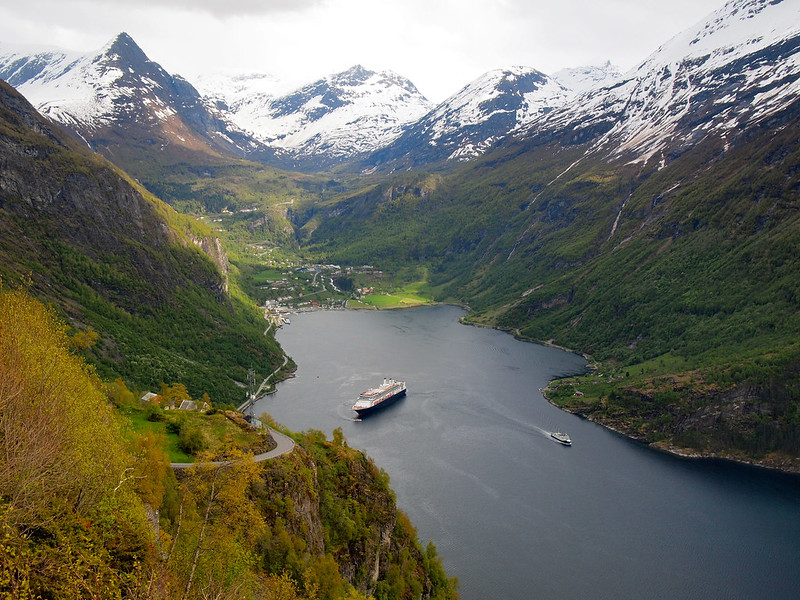 Even though I was there during the coldest, wettest spring most Norwegians can remember in recent years, I LOVED Norway. Yes, it was expensive — but this is one splurge that I think is absolutely worth it. 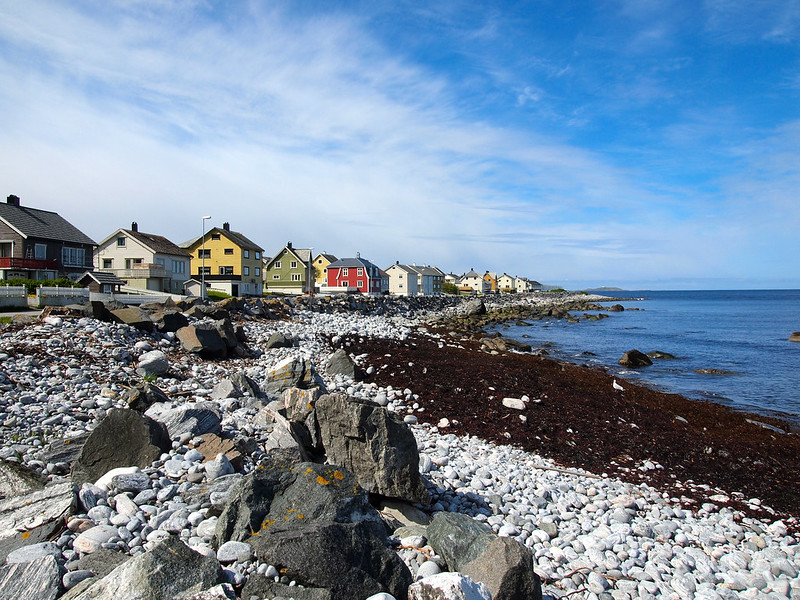 If you're planning your own trip to Norway soon, here's a look at my 10 days there to help inspire your own travel itinerary:

I started out in Oslo, where I spent two days trying to see as much as I could while battling jet lag. Highlights included a walking tour of the main city sights (like the City Hall, the Opera House, Karl Johans gate, and the fortress), Vigeland Park with its many sculptures, and going to the Viking Ship and folk museums. There's SO much to do and see in Oslo, so I know it's somewhere I'll need to go back to sometime!

Where I stayed in Oslo: The Scandic Vulkan, which is a really cool hotel close to the city's main hipster neighborhood. My room had floor-to-ceiling windows and a ridiculously comfy bed. (Read reviews | Book here)

After Oslo, it was off to Trondheim by train. It rained a good portion of the time I was there, but thankfully the saying “Don't like the weather? Wait 5 minutes” applied here and I DID get some brief moments of sun. I enjoyed Trondheim much more than I expected to, from the wooden wharf houses in the Bakklandet to the massive Nidaros Cathedral in the middle of town. Trondheim gets overlooked by many people because it isn't known for its landscapes – but I still found it to be a very cool city worth a visit. 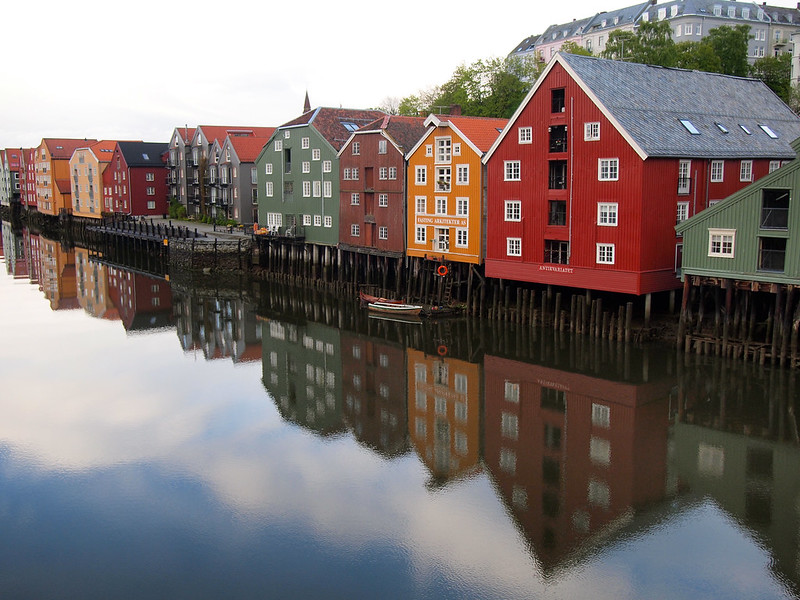 Where I stayed in Trondheim: The Clarion Hotel & Congress, which is right on the water with a cozy lounge and cool rooftop bar. (Read reviews | Book here)

Read more: Why You Should Add Trondheim to Your Norway Itinerary

I arrived in Kristiansund by ferry from Trondheim, greeted by more rain and cool weather. I then had a near-panic attack over a mix-up with the rental car I was supposed to pick up there, keeping me from doing much exploring. But then the skies began to clear and a rainbow and beautiful sunset reminded me that everything works out in the end (and it did!). 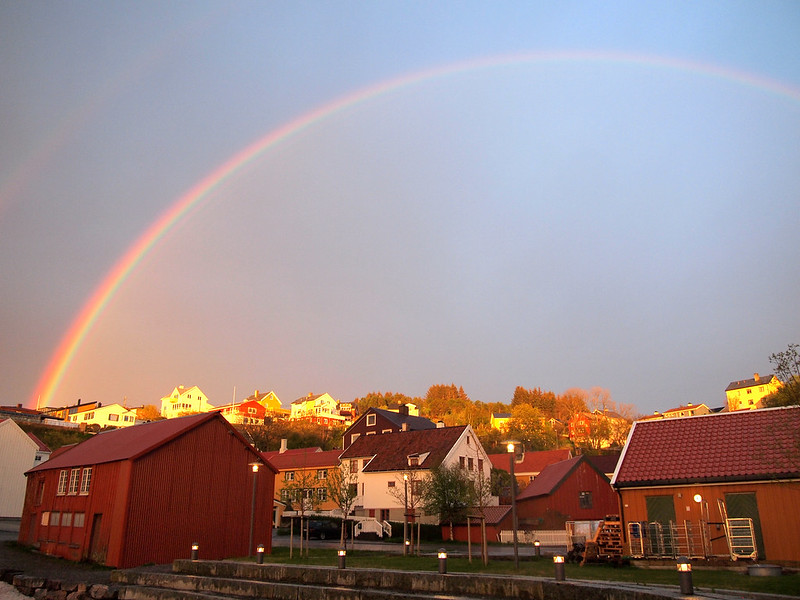 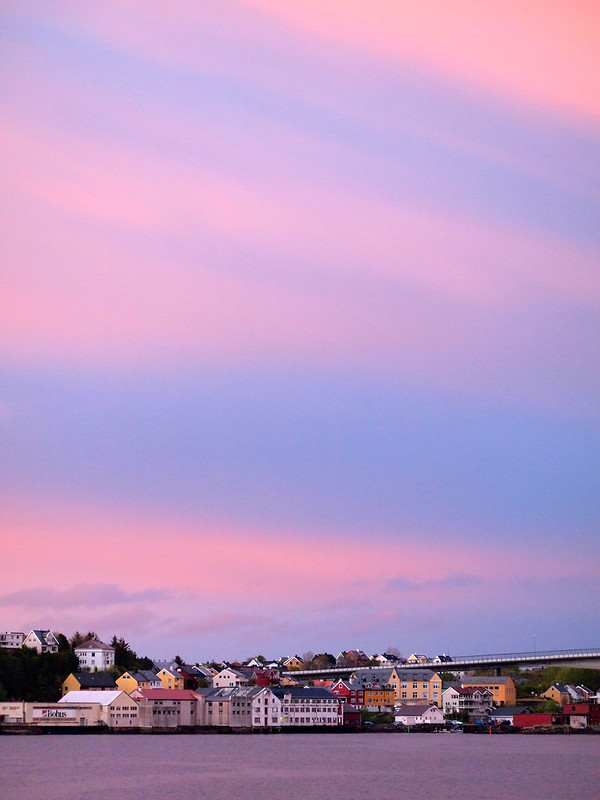 Where I stayed in Kristiansund: The Thon Hotel Kristiansund, which is on a little island across the water from the city center. It's great for getting photos of the city. (Read reviews | Book here)

Before leaving Kristiansund the next day, I hopped on a boat tour out to Grip Island. This former fishing village was abandoned decades ago, but locals still use the houses and cabins for summer homes. The weather out at sea was much better than the weather on the mainland, meaning that I once again had a brief meeting with sunshine while exploring the small island. 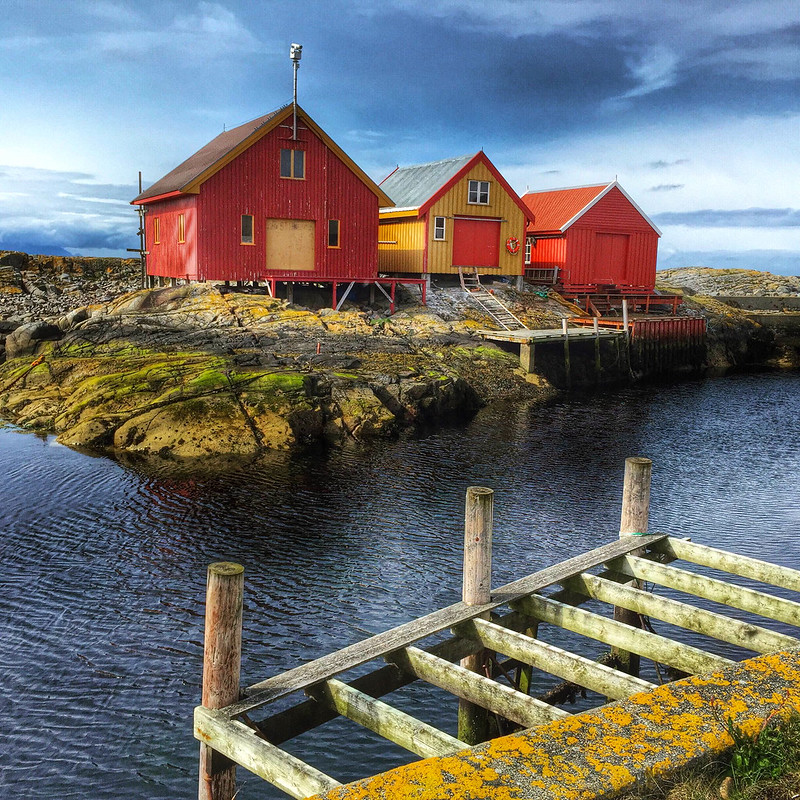 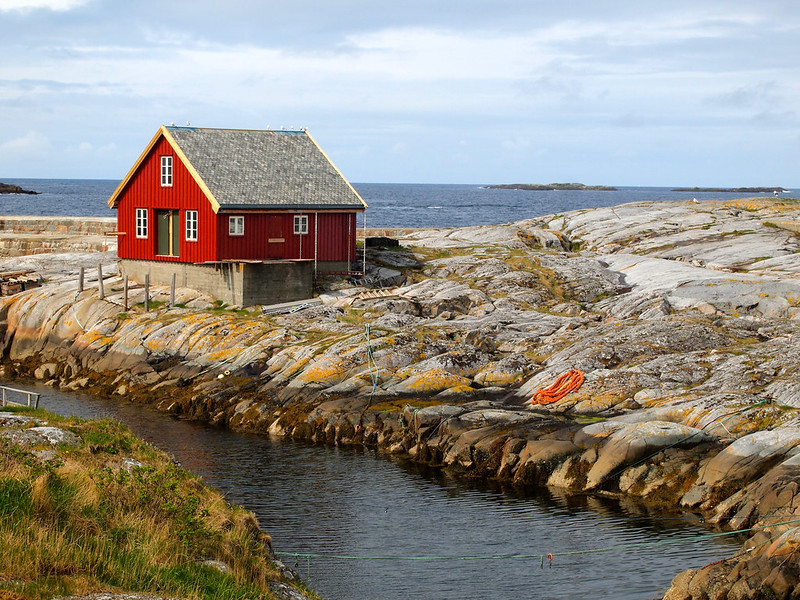 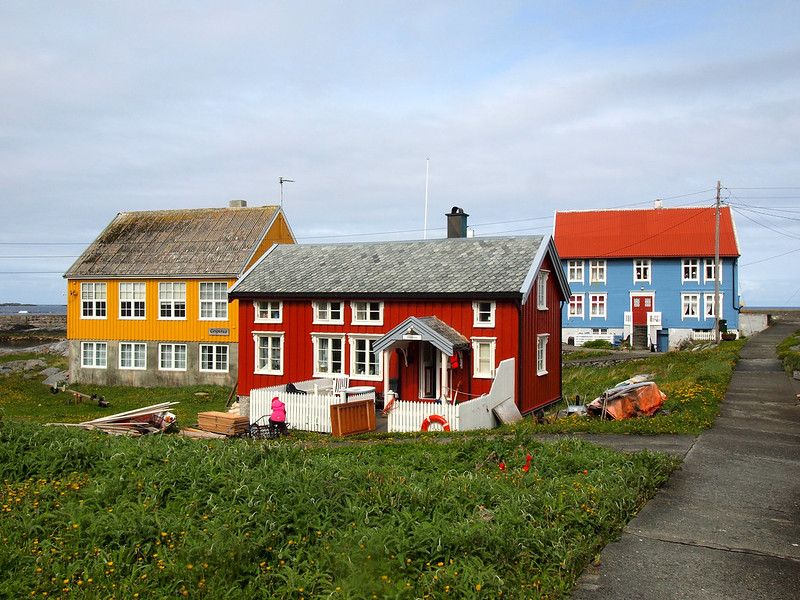 Check out Gripruta to plan your own visit to this very cool island.

Read more: Going Back in Time in Grip

Once back in Kristiansund, I hopped in my rental car and began the drive to Ålesund. But I didn't take the normal highway there — I took the long way 'round, which included driving along the 8-kilometer-long Atlanterhavsveien, or Atlantic Ocean Road. This has to be the most scenic stretch of 8 kilometers I've even driven, with the highlight being the Storseisundet Bridge.

Read more: The Shortest Yet Most Epic Road Trip Ever

I spent the night of Day 6 as well as the next day in Ålesund, Norway's art nouveau city on the coast. I explored a bit on foot, saw the city from above (it looks fake from up high!), visited the aquarium, and even did a short road trip out to a nearby island to see the Alnes lighthouse. Since Ålesund is built atop a handful of islands, driving between them is interesting — it requires using several undersea tunnels! 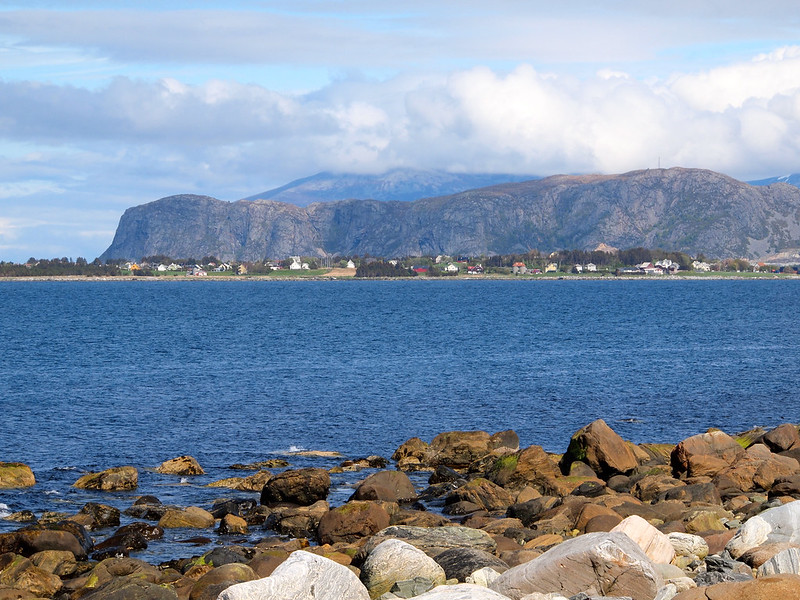 Where I stayed in Ålesund: The First Hotel Atlantica, which is located in the heart of the city very close to all the cool art nouveau architecture. (Read reviews | Book here)

Read more: All You Need to Know About Ålesund

It was difficult to imagine anything topping what I'd already seen, but Norway's Geirangerfjord managed to do it. I took a car ferry through part of the famous fjord, then used a tiny electric car to explore Geiranger for the afternoon. The viewpoints above the small port town are STUNNING, and even cloudy weather couldn't dampen my mood. I then drove up the twisting Eagle's Road to an adorable guesthouse in Norddal where I ate goat for the very first time.

Where I stayed: At the Petrines Guesthouse in nearby Norddal. This guesthouse is super cute and cozy, and Norddal is much less touristy than Geirangerfjord. (Read reviews | Book here)

Read more: The Most Famous Fjord in Norway

My next driving adventure was down another very short but very cool stretch of road: Trollstigen, or the Trolls' Road. I drove through snowy mountain passes to get there, and climbed through snow drifts to get photos at the top. Totally worth it, though. 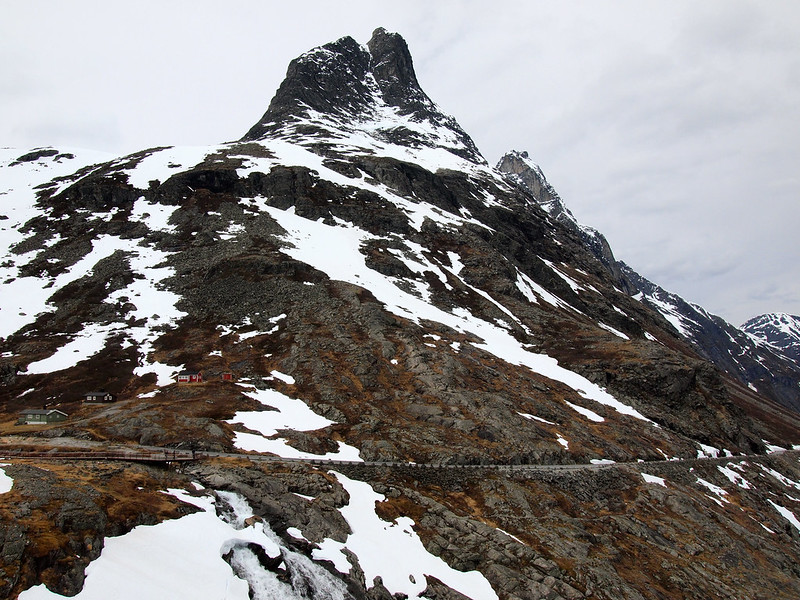 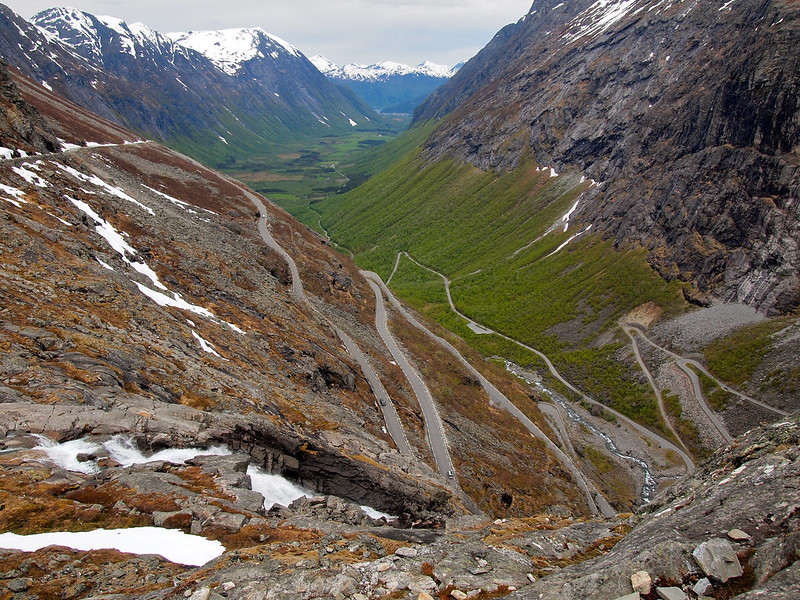 My adventure more or less ended in Åndalsnes, a small town that's both on the fjords AND surrounded by mountains. A thriving adventure sport scene has formed here (everything from mountain climbing to base jumping), and I got to try stand-up paddleboarding on a river for the first time. I also stayed in my favorite hotel of the trip, a family-run one called Hotel Aak.

Where I stayed in Åndalsnes: At Hotel Aak, which was such an awesome hotel run by a very friendly family.

Then next day, I dropped off my car and took the famous Rauma Railway from Åndalsnes to Dombås, and then continued on to Oslo and my final night in Norway.

I didn't do the typical “first time in Norway” route that usually includes Bergen — but I'm actually glad for that. I got to see some really awesome parts of the country (some I'd never even heard of before), and feel like I have a much better feel for Norway, its people, and what it has to offer now.

Plus, Bergen will always be there next time.

Which of these destinations would you add to your own Norway itinerary?

Thanks to Innovation Norway, Visit Oslo, Visit Trondheim, Fjord Norway, and NSB for making this trip fantastic! As always, all opinions are my own, regardless of who is footing the bill.

Check out these Norway resources: 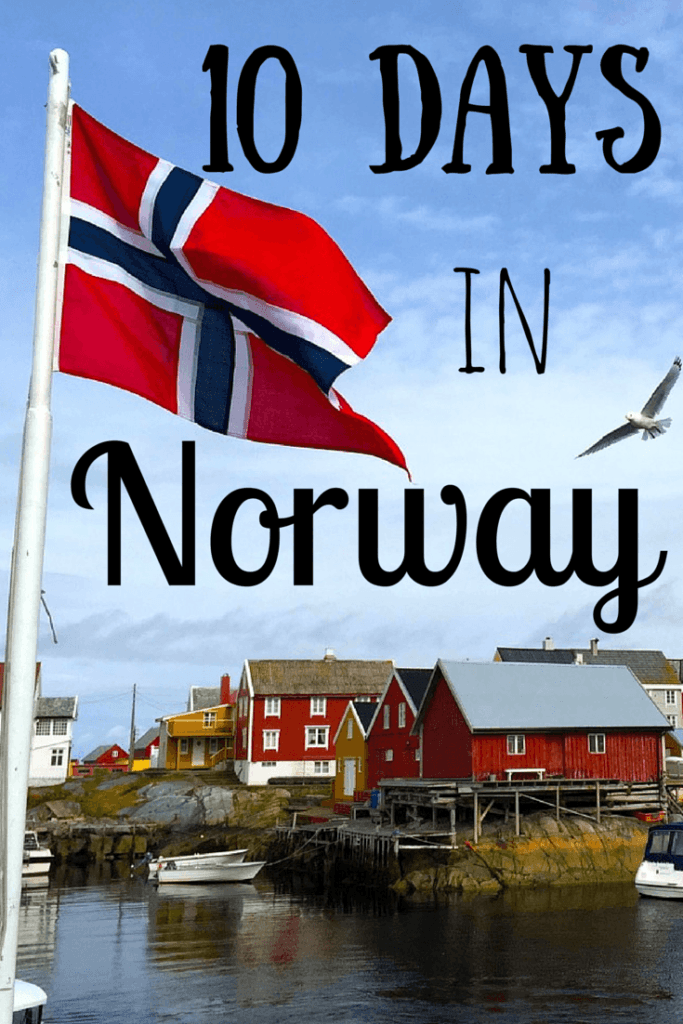 121 Comments on “A Travel Itinerary for 10 Days in Norway”