Why You Should Add Trondheim to Your Norway Itinerary

If you've ever considered a trip to Norway (or maybe if you're reading this post because you're currently planning a trip there), chances are you've already had people tell you that you have to go to the fjords. You may have had people recommend Tromsø and the Lofoten Islands in the north, or wax poetic about Bergen in the south. They may have even told you not to skip Oslo.

But what do you know about Trondheim?

If you're anything like me before my first trip to Norway, chances are you don't know much. And when we haven't heard a lot about a place, chances are we won't be too fussed about going there.

So let me tell you a bit about Trondheim. Because Trondheim definitely DOES deserve a spot on your Norway itinerary. 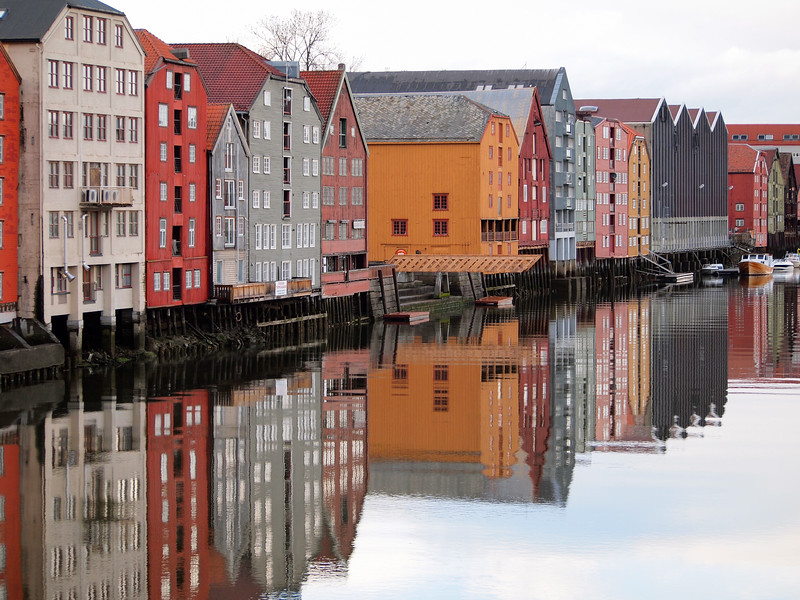 During my two days in Trondheim, I began referring to the coastal city as the “capital of many things in Norway.” It's the bike capital of Norway, with by far the most designated bike lanes that I saw anywhere in the country (though it still wasn't that many). It's the electric car capital of Norway, even offering charging stations in the city center. It's also branded itself as the foodie capital of Norway, with a lot of local (and delicious) food being served up all around the city and during a popular annual food festival.

And, of course historically Trondheim was the ACTUAL capital of Norway. The city was founded by the Vikings in 997 (yes, that's right kids, this city celebrated its THOUSAND YEAR anniversary in 1997), and served as the capital of Viking Norway up until 1217.

In the Middle Ages, Trondheim was a popular spot for religious pilgrimages thanks to it being the seat of the Archdiocese of Nidaros for Norway. (So maybe that makes it a religious capital, too?)

Today, Trondheim is the third-largest city in Norway. This might seem a big daunting if you're not much of a “city person,” but don't worry — you can walk from one end of the city center to the other in about 20 minutes, and it's really easy to navigate. 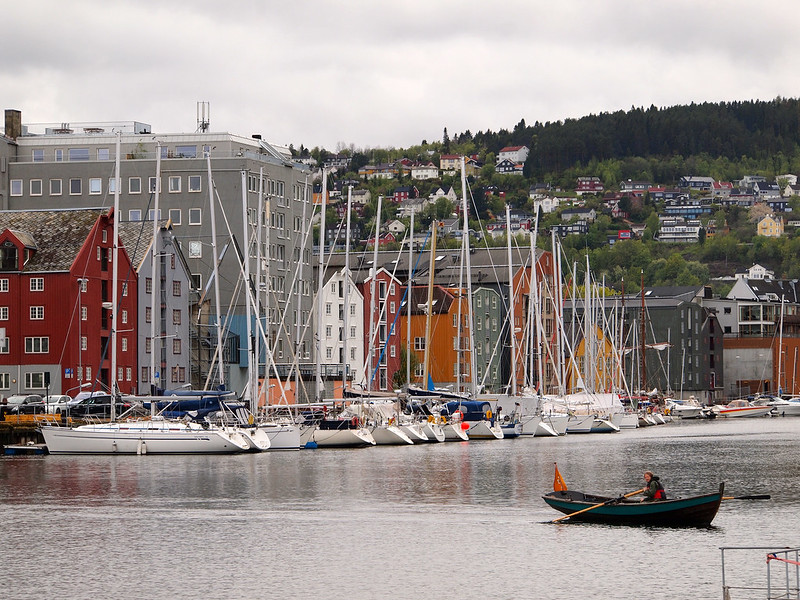 And, now that I've told you a bit about Trondheim's history, here are a few things you should make sure to check out while you're there (because you're definitely going there now, right?):

Things to do in Trondheim

One of Trondheim's major draws is its cathedral. It was built nearly 1000 years ago on the burial site of Saint Olav, an early Viking king of Norway who became the patron saint of the country. For hundreds of years, it was the seat of the region's archbishop (hence why it's a cathedral). Unfortunately, the church was plagued by fires during the Middle Ages, leaving it more or less in ruins for a long time. Thankfully, restoration of the cathedral began more than 100 years ago and continues today. 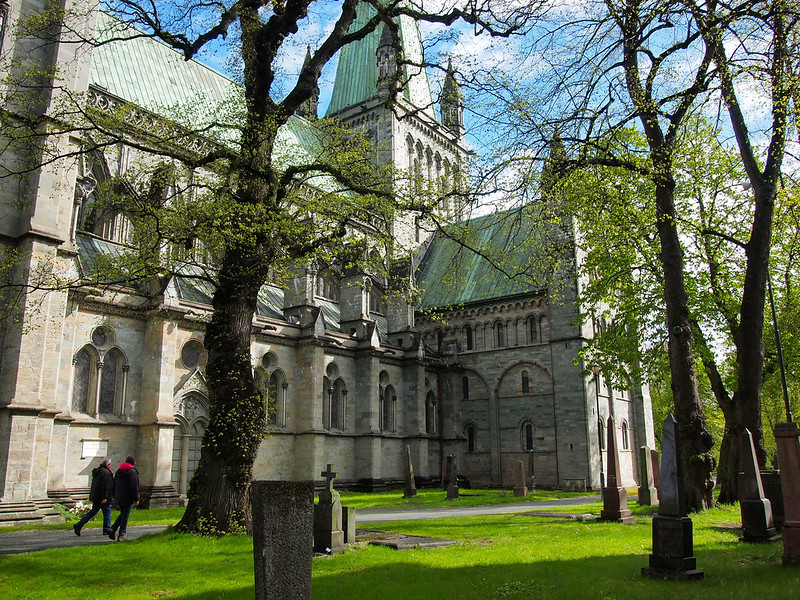 When you visit Nidaros, you can take a tour inside the cathedral (sometimes even up into the bell tower), visit an exhibition in the buildings where the archbishop would have lived, and visit a museum filled with items that have been found in/around the church during restoration. 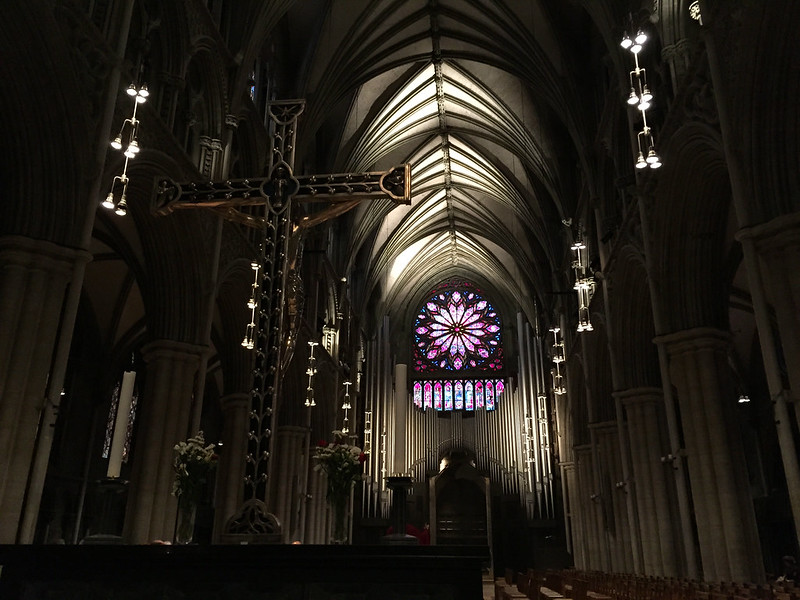 The Bakklandet neighborhood in Trondheim is definitely the most picturesque part of the city. Here you'll find cobbled streets and old wooden buildings that have escaped fire and demolition over the years. Many are old warehouses that have now been converted into homes, shops, and restaurants. 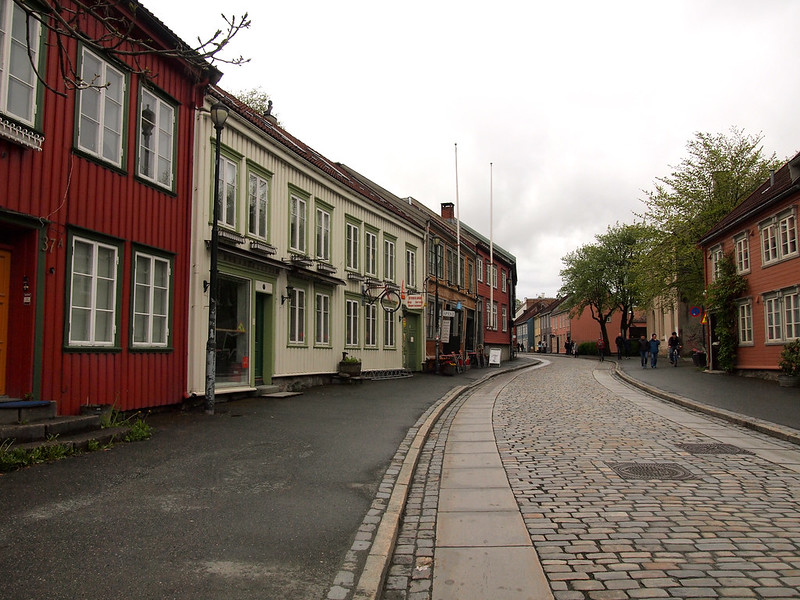 My favorite view of Bakklandet was from the Old Town Bridge — thank you, rain, for stopping long enough for me to get some decent photos!

Trondheim has a few museums, but the coolest is probably Rockheim, an interactive, multimedia-fueled museum all about rock n' roll. I'd also recommend the Sverresborg Trøndelag Folk Museum, which includes an open-air portion that's set up like an old Norwegian village.

Go for a wander

Like I mentioned earlier, Trondheim is an easy city to navigate on foot, so going for a wander through its streets is never a bad idea. Since the city is quite bike-friendly, this makes it quite pedestrian-friendly, too. 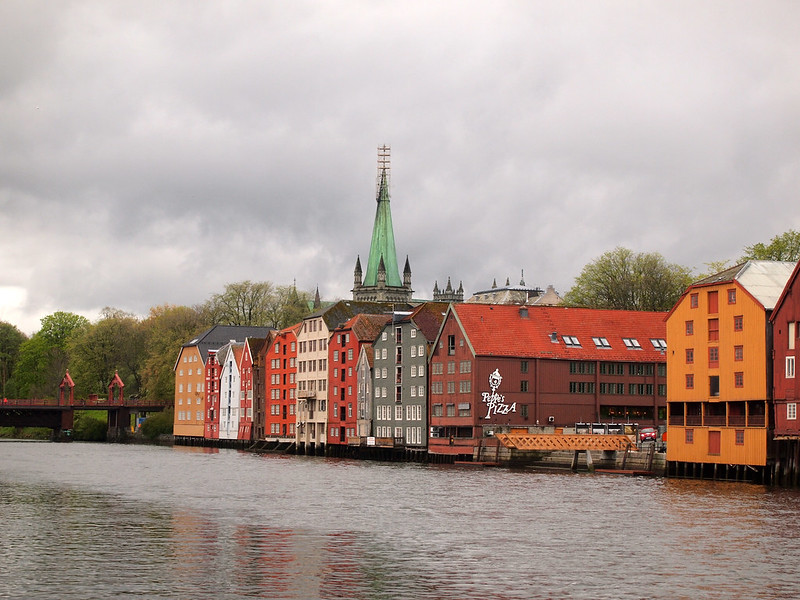 Where to eat in Trondheim

Since Trondheim is the self-proclaimed “food capital” of Norway, I figured you'd probably want some recommendations on where to eat, too.

If you go to this restaurant's website, it will describe itself as “a peaceful café where you can enjoy delicious food and drinks in a traditional setting” in the Bakklandet. But that description is grossly underselling this amazing little place! The food is not only delicious, but it's also all locally sourced and home-made. And the “traditional setting” you can expect is a cozy, homey atmosphere with decor that makes it look like the house of the Norwegian grandma you never had.

If you're looking for a lighter meal or good cup of coffee in a more hipster part of Trondheim (it's a university town — of course there are hipsters here!), head to Ramp in the Svartlamon neighborhood. This part of town isn't nearly as polished as the city center, but I kind of liked that about it. It definitely felt more “lived in.”

Located in an old warehouse building along the Nidelven River near the Old Town Bridge, Havfruen is one of Trondheim's leading seafood restaurants. And, if you'd rather fish for your own dinner, I'm told that at certain times of year (especially during salmon season), you can go inside and ask for a fishing pole! (Though if you catch it, you cook it.) 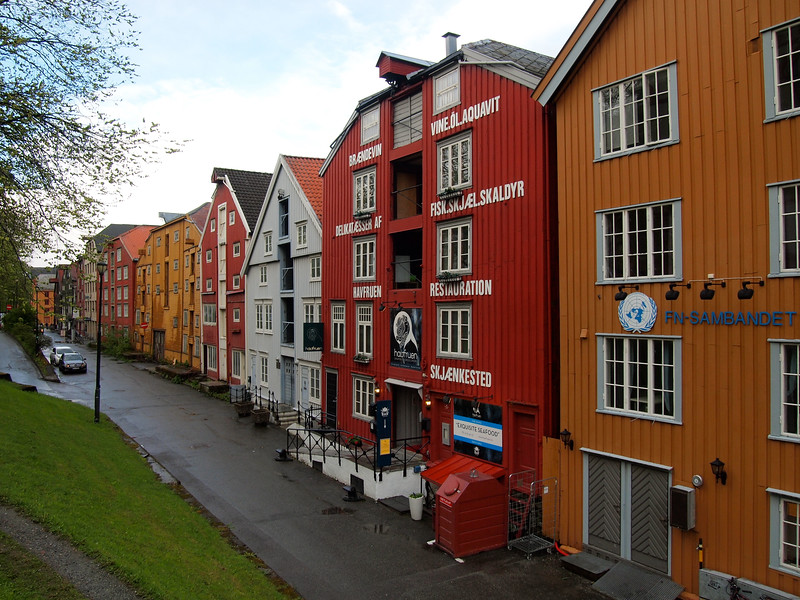 If you want to get away from the city and get back to nature, head up into the forest surrounding Trondheim. There are lots of hiking trails here (and cross-country skiing in the winter), and you'll also find the cozy Skistua, a cabin-like restaurant that makes good pizza and delicious waffles.

Where to stay in Trondheim

I stayed at the Clarion Hotel & Congress while in Trondheim, a huge hotel right on the waterfront. The hotel has nice rooms, a cozy lounge/bar near the lobby, a delicious breakfast buffet, and a really funky rooftop bar that I imagine would be a great place for a drink in the summertime.

Rooms start at around $130 USD and range up to around $235 for a standard room with breakfast included.

As you can see from most of my photos, I had a rather rainy visit to Trondheim. In fact, everyone I met told me it was the coldest, wettest May weather anyone could remember.

Usually rainy weather negatively affects my perception of and experiences in new places. But, somehow, Trondheim managed to entirely charm me, even through the drizzle.

So who's ready to visit Trondheim now? 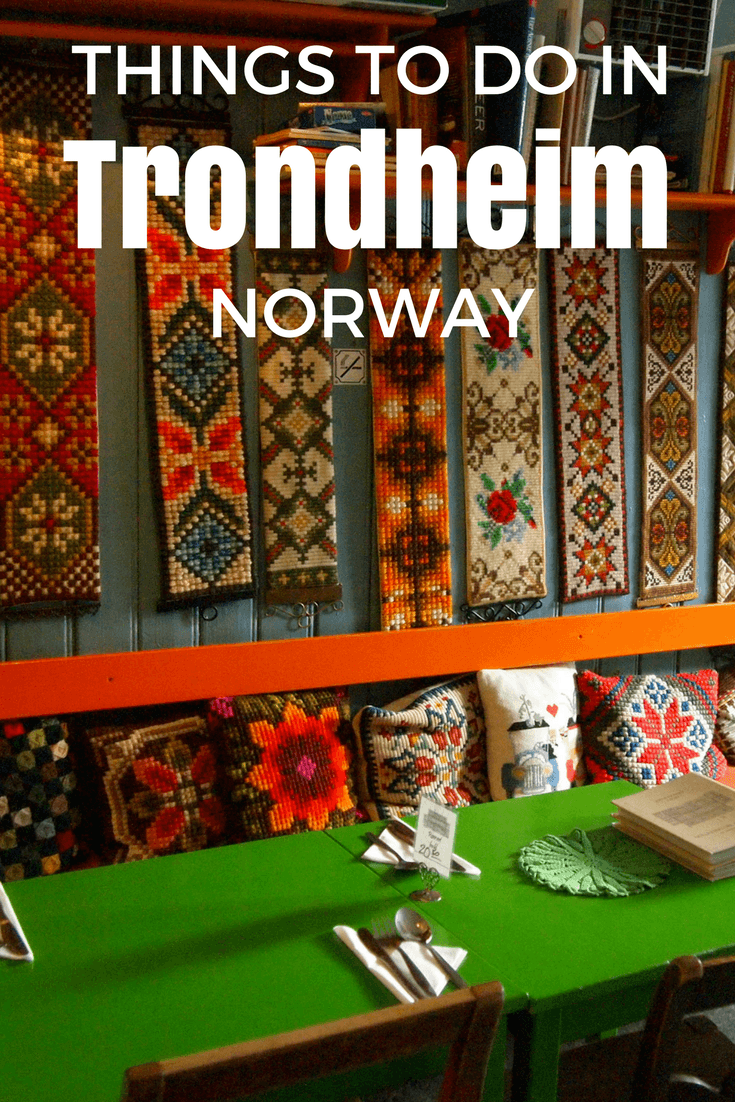 *Note: Thanks to Visit MY Trondheim for hosting me in the city. As always, all opinions and recommendations are 100% my own.