There's no denying that there's something a little bit magical about Ireland. Maybe it's because it's so green or that it's filled with rainbows… whatever it is, Ireland seems to be one of those places that almost always makes it onto bucket lists.

My first trip to the Emerald Isle was back in 2007, and I've been back a handful of times since then. I've kissed the Blarney Stone, listened to music in pubs, and even celebrated a birthday at the Guinness Storehouse in Dublin (which, yes, I realize is extra funny since I don't even drink beer).

But other than a brief trip in 2013, I hadn't really spent any time in the six counties that make up Northern Ireland.

So when the opportunity came along to try out a tour with Irish company Shamrocker Adventures, I immediately knew that I wanted to go on their Giant's Rocker tour, which covers both Ireland and Northern Ireland.

Northern Ireland has always been intriguing to me. It's where the Titanic was built. It's had a turbulent past couple of decades. And it's become a favorite filming location for “Game of Thrones.”

(And, really, who wouldn't relish the chance of running into Jon Snow in a little pub in a tiny coastal town?) 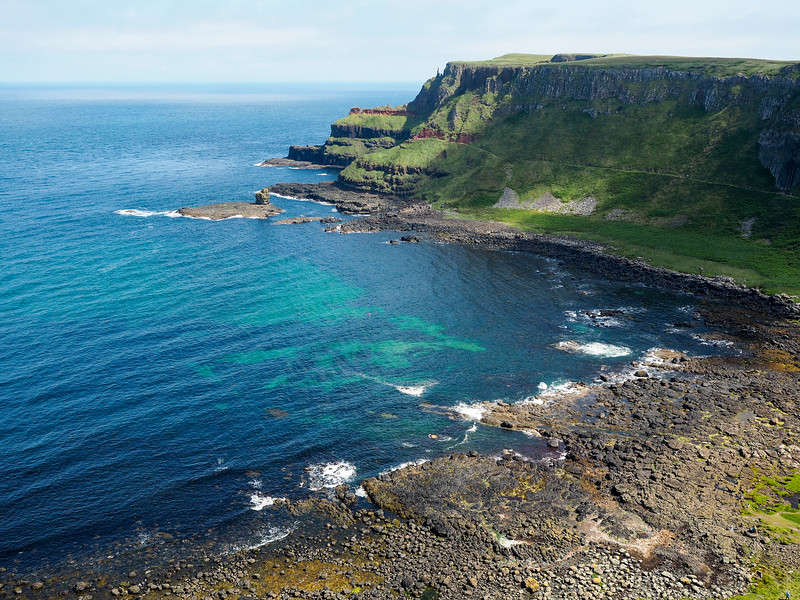 Shamrocker Adventures has two sister companies in Scotland, which you may remember me writing about before: Haggis Adventures and Highland Explorer Tours. Because I've loved all my Haggis and HEX tours in Scotland, I was confident that Shamrocker would deliver a similarly awesome tour in Ireland.

And I was not disappointed!

The Giant's Rocker tour that I did was 5 days long, beginning and ending in Dublin. We spent time in both Ireland and Northern Ireland, which is made possible by the fact that the island the two countries share is fairly small.

If you're looking for a great introduction to Ireland and Northern Ireland, this tour is it. Here were my favorite parts:

Here were my personal highlights from this tour:

Our tour started with a stop in Belfast, where we had the option to take a black taxi tour to a few different parts of the city in order to get a sense for what things were like during “The Troubles.” In case you're not familiar with The Troubles, they were essentially decades of tension and violent clashes that plagued cities like Belfast and Derry. 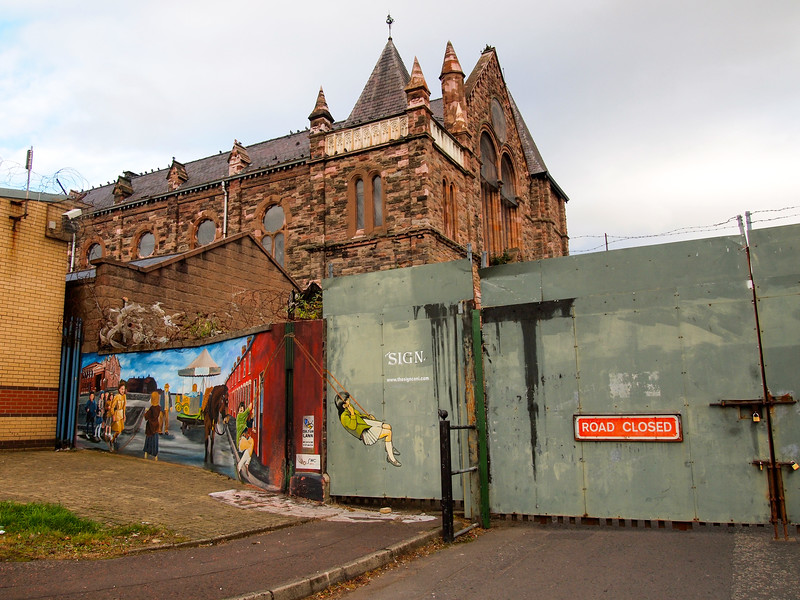 Many people explain the conflict as religiously-charged, but really it all boils down to people on one side who want the Northern Ireland counties to go back to being part of Ireland, and the other side who want them to remain part of the United Kingdom. It just so happens that most of the pro-Irish side is Catholic and most of the pro-British side is Protestant, which is why religion is usually brought into the narrative.

I wrote extensively about Belfast and its Troubles a few years ago, but hearing other stories and visiting more neighborhoods on both sides of the “Peace Wall” (because, yes, there's still a huge wall that divides both sides of Belfast) was still very interesting.

On our way up to Ballintoy and the Causeway Coast, we made a stop in County Antrim at a site that has exploded in popularity in the last year or two because of “Game of Thrones.” Even though the Dark Hedges only appeared in one scene in one episode in one season of the show, the “Game of Thrones” effect has nevertheless begun to draw huge groups of tourists to this site every single day.

Visiting in the mid-afternoon meant the lane was filled with people, cars, and even buses. But it was still pretty cool.

We had some free time on the morning of Day 2, so myself and a few others from my group decided to walk from our hostel in Ballintoy to the Carrick-a-Rede rope bridge. The bridge is now a tourist attraction maintained by the National Trust, but historically was used by fishermen who would go over to the tiny island of Carrick-a-Rede to fish for salmon.

The bridge is pretty impressive, sitting about 100 feet above the crashing sea. 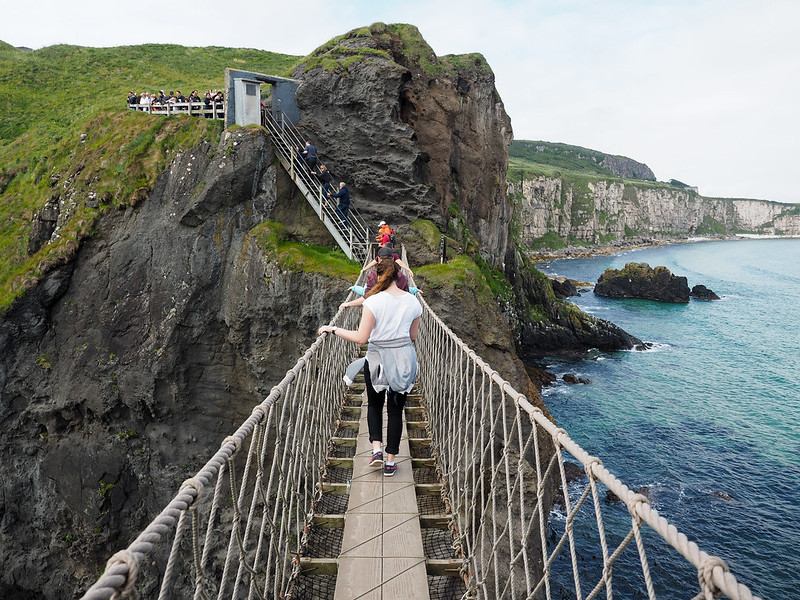 If you're going to do this on your own, just know that you have to walk about a kilometer to reach the bridge from the parking lot, so be sure to allow yourself enough time!

From Ballintoy, we headed a few miles up the coast to the famous Giant's Causeway, a UNESCO World Heritage Site and one of the most popular tourist attractions in Northern Ireland. Here, cooling lava from ancient volcanic activity cooled into hexagonal basalt columns that look weirdly like steps. 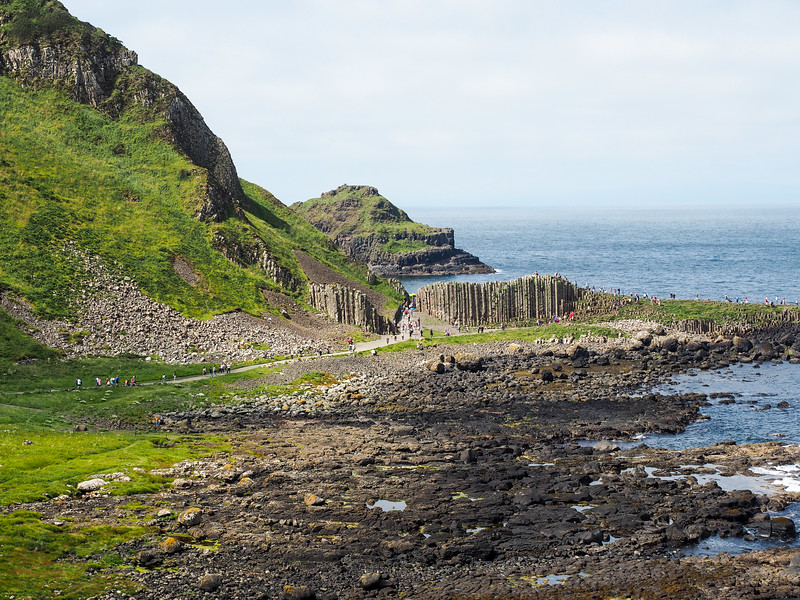 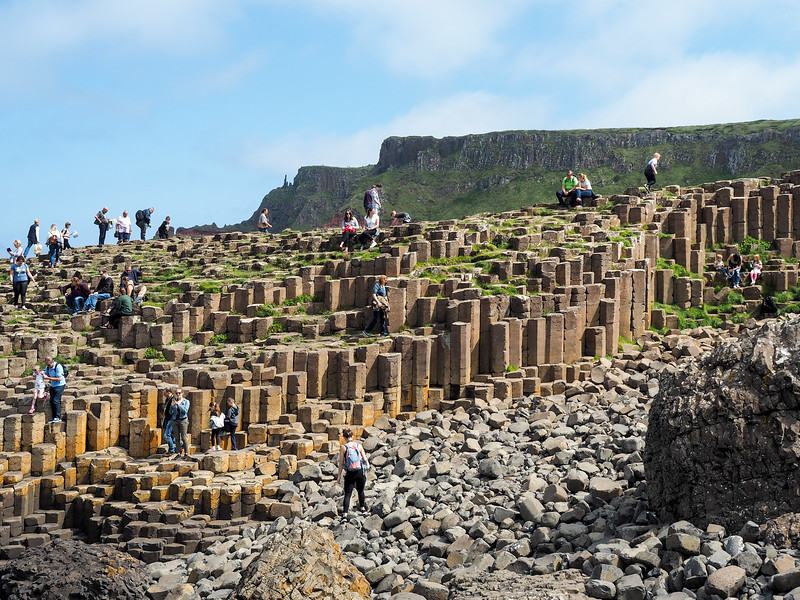 We had time to walk along the cliffs overlooking the coast, and then spend some time among the columns. Take time to listen to the audio guide, too, where you can learn of the myth of the giant Finn MacCool, who is said to have created (and destroyed) the causeway. 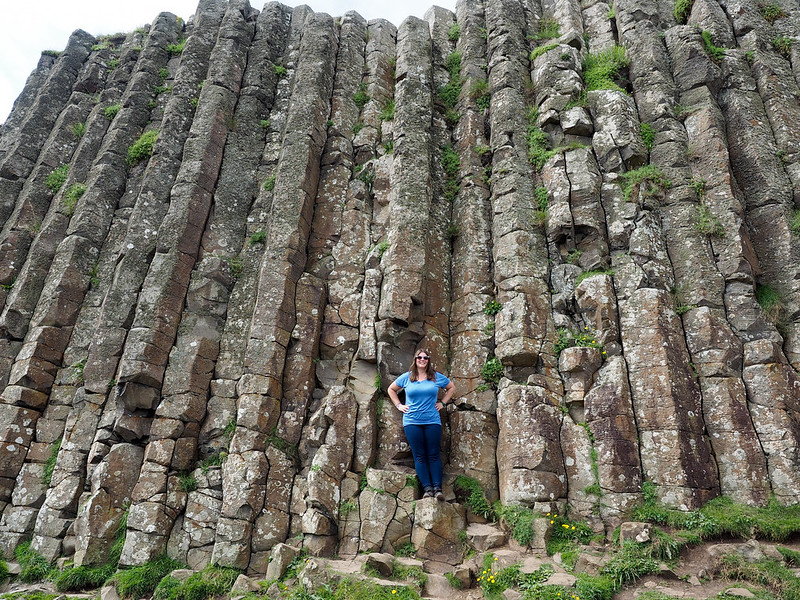 RELATED: In the Footsteps of Giants

We ended Day 2 in the city of Derry – or Londonderry, depending on who you ask. Derry has been known in most recent years as the main kicking off point for The Troubles in Northern Ireland, but also is home to the only completely intact ancient city wall in Ireland.

Here we had the option of going on a walking tour with Derry City Tours, which covered everything from the city walls to the Bloody Sunday story and memorial murals.

I had no clue what to expect from Derry, but actually really liked it. It's a city I definitely hope to return to.

Back in the Republic of Ireland, one of the highlights of this tour came on Day 4, when we caught a morning ferry over to Inis Mór, the largest of the Aran Islands. Once there, you could rent a bike or go on a mini bus tour of the island to see its miles of stone walls, its cute villages, and the ancient Iron Age fort of Dún Aengus.

Be prepared for two things: a rough ferry ride (seriously – just TAKE THE SEASICKNESS TABLETS ahead of time), and extremely changeable weather (both a raincoat and sunscreen will probably be necessary).

On the way back to Dublin on Day 5, we stopped at the famous Cliffs of Moher for a couple of hours. We had just enough time to take a walk along the cliffs and grab a coffee in the visitor's center. It was windy and a bit hazy on this visit, but the cliffs are still incredibly impressive. RELATED: Visiting the Cliffs of Moher

Those were just my personal highlights. Other places the Giant's Rocker tour visits include:

Westport – A super cute Irish town where you'll have a lunch break.

Connemara – You'll drive through the rugged landscape of Connemara, and stop at a local pub for an Irish Coffee.

Galway – You'll spend two nights in Galway, which is probably Ireland's most lively music city. However, you really only have evenings free in the city. Be sure to head down to its pedestrian streets at night for food and live music.

Shamrocker Adventures targets younger travelers (think: backpackers), but they don't put any age limits on their tours. My group was made up of mostly Aussies (super common on tours in Europe), and I'd say the average age was probably mid- to late-20s. But we also had an older couple in their 70s in our group, which was so fun!

Where do you stay?

Shamrocker uses hostels for their main accommodation option. There are a few private room upgrades available on each tour, but these tend to book up quickly and most people will find themselves in shared dorm rooms.

In Ballintoy, we were in rooms of anywhere from 7-15 people, while the Galway hostel is more likely to give you 6-8 person dorms. In Derry, you get to stay in triple hotel rooms, which is a nice change!

None of these accommodations are fancy, but they are all clean and central. You'll want to bring things like your own towel and toiletries for the hostels, and you may also want to bring morning snacks, because “free breakfast” in budget places like these usually just means juice and toast!

How do you get around?

Transport is provided in a private bus with a dedicated driver. The size of the bus will depend on the size of your tour group. My group was large (34, I think), so we were on a bigger coach.

How do meals work?

Meals are not included in this tour, though your guide will often offer to arrange group dinners at local pubs. Usually these are cozy local spots with hearty Irish food – and meals usually only cost about 10 Euro or so.

If you want to join the group dinner, you'll just give your order to your guide (they usually pre-order all the pub food so you're not sitting there waiting for hours) and then pay at the pub.

You're of course always free to go and do your own thing for dinner, too! 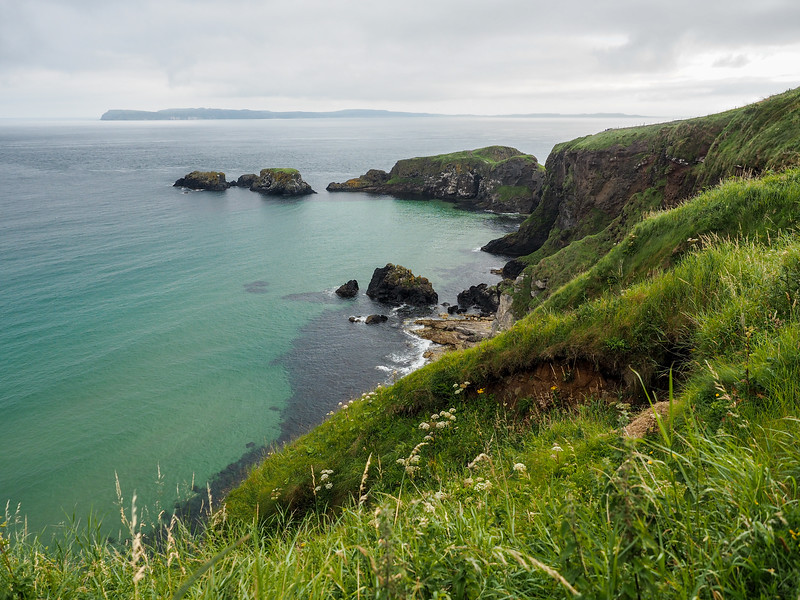 If you're looking for a budget tour in Ireland, then Shamrocker Adventures is definitely for you. The base price for the Giant's Rocker tour is $549 USD per adult, which includes your guide, transport, accommodation in a shared hostel dorm for 4 nights, and entry to a few attractions. You can also pre-pay for the black taxi tour in Belfast and the walking tour in Derry when you book (OR you can pay for those as you go).

The base price includes entry to Giant's Causeway and the Cliffs of Moher, along with the ferry to Inis Mór. When you add to this transport, accommodation, and a guide, it's a pretty good deal.

What if I want to see more?

Five days are definitely not enough in Ireland! If you want to see more, Shamrocker does offer more tours in the country, ranging anywhere from 3 to 7 days. The 7-day All Ireland Rocker includes everything in the Giant's Rocker, along with visits to the Dingle Peninsula, Killarney, and Blarney Castle.

And of course I always recommend tacking on a handful of days in Dublin at either the beginning or end of your trip, too! 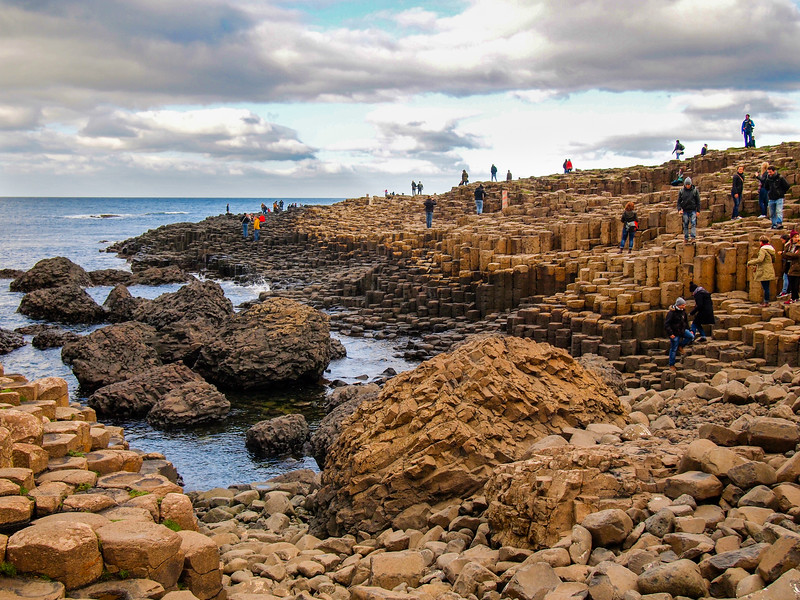 Should I book this tour?

If you are on a budget, short on time, and/or don't feel comfortable renting a car to explore Ireland on your own, then YES, this would be a great option for you. Not only will you get to see so many of the highlights of Ireland and Northern Ireland, but you'll get to do it stress-free with a great guide and a fun group of other travelers, too!

Would you consider a tour like this in Ireland? 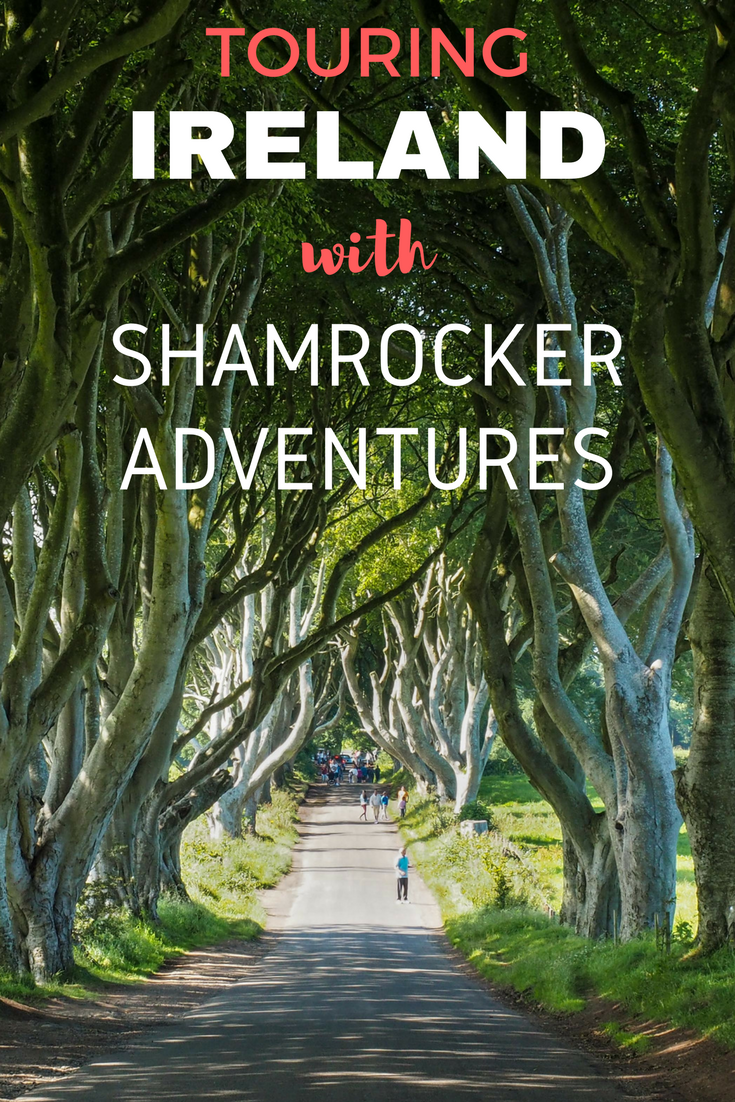 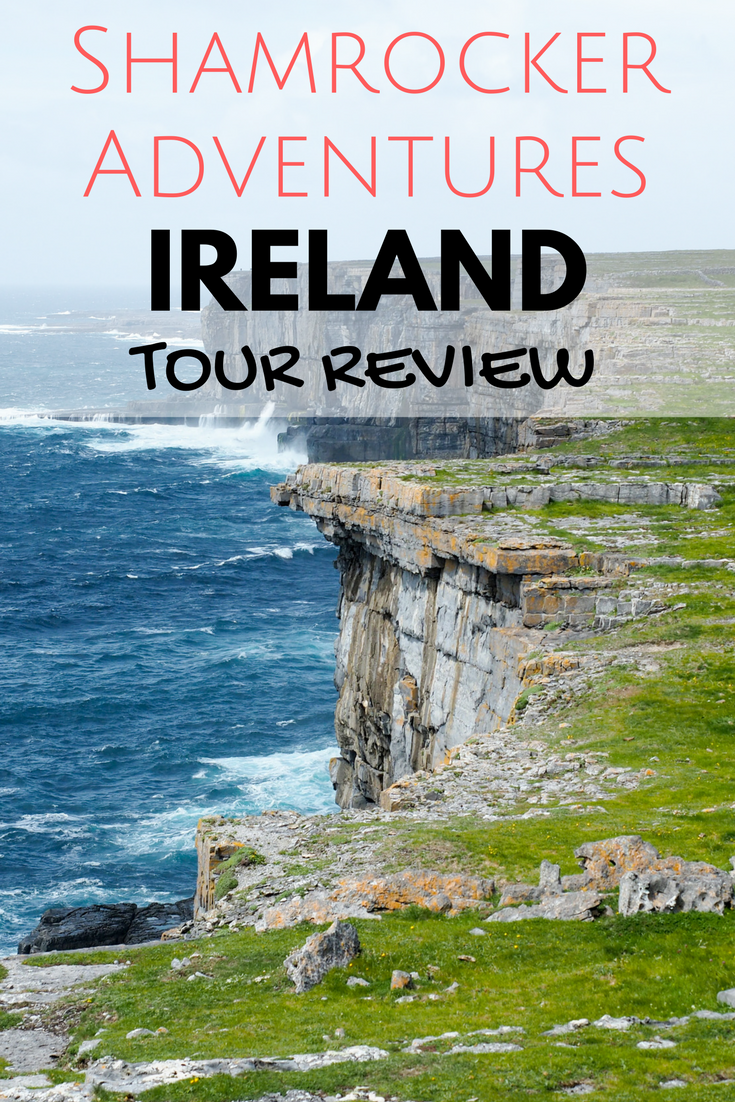 *Note: I was a guest of Shamrocker Adventures on this tour. But, as always, all opinions are 100% my own!