8 Things to Know Before Your First African Safari

Home » Africa » 8 Things to Know Before Your First African Safari

Ever since I was a little kid flipping through the pages of my Zoobooks, I knew that someday I wanted to travel to Africa and go on a safari. I wanted to see wild lions and herds of zebra and big-eared elephants – probably not much different than what many of you have dreamed of.

And after finally getting to do all of that last year during a 5-week trip to Southern Africa, I can tell you that going on safari is just as amazing as you've probably always imagined. In fact, I think it's even better in real life!

The private game drive is what most people think of when they think “safari,” but there are actually so many different options!

Regardless of how you go on safari, though, I think there are some things worth knowing before you go.

Here are 8 things to know before your first safari:

Animals aren't really the same as people – they're most active right at first light and again around dusk. And this means that you can expect some very early starts to your safari game drives. In South Africa, our morning game drives would begin between 5:30 and 6 a.m., and then we would be back at the lodge around 9 a.m. for breakfast. 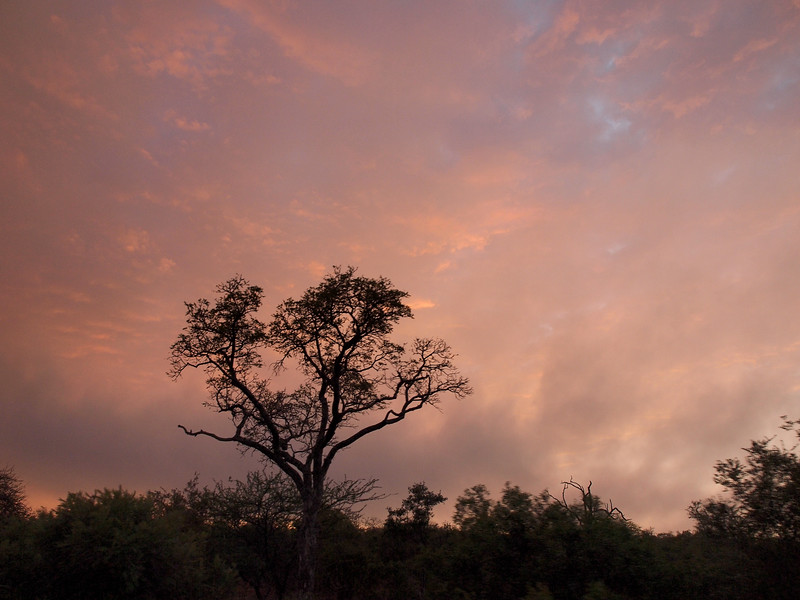 This timing was great because it meant we got to see the sunrise, as well as all the animals that are more active in the early morning hours. Even if you're not a morning person, force yourself to be one for those early game drives.

Every game drive is different

Thinking of skipping one of those early morning game drives in order to sleep in a little longer? Well don't! No two game drives will ever be the same since you're dealing with wild animals in a non-controlled environment. You won't ever see the exact same things if you go on multiple game drives.

Take the game drives I went on in Kruger National Park. On one drive, we saw a month-old baby rhino with its mother, and two male lions challenging each other over territory; on another we watched a huge herd of elephants playing in a riverbed, and then caught a pair of lions mating; and on another drive (our very last one in Kruger) we saw a pack of super-rare wild dogs challenging a group of hyenas.

And of course the more parks and protected areas you visit, the more opportunities you'll have for unique sightings. In Chobe, for example, we got to get up close to hippos safely in a boat, and even got to watch elephants swimming!

Even though you might be tempted to skip a game drive, using the excuse “well I've already been on a few” to justify a couple more hours of sleep or a nice sundowner drink at the bar, I would reconsider. You might miss the best sighting of your whole safari!

You're not guaranteed to see anything

Of course, there are no guarantees when it comes to safaris. After all, we're talking about wild animals in huge national parks here, most of the time without any fences or barriers to hamper their movements. While most animals do have a general territory that they stick to, it doesn't necessarily mean that you'll see them in it.

(For example, I was dying to see a big herd of zebra on safari, but we only spotted one lone zebra in Kruger. I had to wait to go to Etosha National Park in Namibia to finally see the zebra herds of my imagination.)

Where you stay matters

While it's true that you have the same chance of seeing animals in a national park as anyone else there, where you decide to stay definitely can have an affect on your overall safari experience.

In Kruger National Park, my dad and I stayed at the Jock Safari Lodge, which is a small private lodge right on the edge of the park. The rooms and food were amazing, the staff was so friendly, and many of the rooms have a view out over a riverbed – meaning you can see wildlife without going anywhere.

In Etosha National Park in Namibia, my overland group stayed at the Okaukuejo Rest Camp, which offers both campsites and more luxurious chalets. The highlight here was the watering hole right on the edge of the camp that was lit by floodlights after dark. We saw elephants, rhinos, giraffes, and more come to drink after dusk just a few steps away from where we were camping.

There are so many places to stay, regardless of your budget or how you're traveling. My advice is to choose a place that not only meets your accommodation needs, but that also will give you the chance to see wildlife from the lodge/camp itself. It's like bonus game drives!

Don't get discouraged, though, if you've been out on a game drive for a while and haven't seen anything yet. The rangers who work in the parks (and especially for the private game lodges) are extremely good at what they do. They are also very good at communicating with other rangers in the area to find out where the best sightings are taking place.

At some lodges in Kruger, you'll go out on game drives with both a driver and a “spotter” to give you the best chance of seeing animals that blend in really well with the African bush. During my stay at the Jock Safari Lodge, though, we were assigned the head ranger for the duration of our stay, and he acted as both our driver and spotter the whole time.

We trusted him completely when it came to choosing routes through the park and deciding when to leave animals in peace. Our trust paid off, too – he put us in the right place at the right time to catch that pack of wild dogs (even HE was giddy over it since they're so rare in Kruger), and even piled us back into a vehicle after a game drive had ended in order to show us some leopards.

The animals aren't scared of trucks

You might be curious about how you can rumble around in a huge safari truck or a boat right alongside a bunch of hippos and not scare the animals away. And it's a good question!

But the answer is simple: Most of the animals that live safely within the boundaries of Africa's national parks have grown up seeing those safari vehicles. And since those vehicles have never done them harm, they simply see them as large, slightly noisy animals that don't pose a threat. This is how you can roll up next to a sleeping pride of lions without waking them, or drive next to a huge elephant without scaring it away. (Conversely, if you approach an elephant on foot, it sees you as a threat and will likely run.)

This does mean, though, that when you're around predators or potentially dangerous larger animals, your ranger will tell you to keep very still and quiet and not hang any limbs outside the vehicle – because this can single you out as being separate from that innocuous “truck-animal” that most animals see.

Contrary to popular belief, there's really do dress code when it comes to safari game drives. You don't have to wear head-to-toe khaki or anything like that. Because, again, remember that most animals don't see you as a person in a safari truck – they see the entire truck as a big animal.

The only time when you'll be asked to wear neutral, natural colors is if you're going on a walking safari. In that case, your ranger WILL tell you what you should and shouldn't wear so as not to spook or attract any animals.

A few things I *would* recommend, though:

And, even though it’s not a tangible item, but I also always recommend packing a good travel insurance policy! That way everything from lost luggage to a bad accident is covered – because you just never know! I recommend World Nomads for basic (and really affordable) travel insurance.

Chances are if you're going on safari you want to get some great wildlife shots to take home and show off. In order to do this, you'll need a decent camera and a long telephoto lens. While you will sometimes get really close to animals, you're more likely to see them from a short distance away for everyone's safety and comfort.

I had an Olympus OM-D E-M5 Mark II camera before going on safari, and purchased a telephoto lens (the Olympus MSC ED-M 75 to 300mm II f4.8-6.7 Zoom Lens) before I left. This was SUCH a good investment, as most of my safari photos were taken on this lens.

(You can, of course, use whatever camera you have if photography isn't really your thing. Most people in my tour group just used their smartphones for photos. But if you are into photography, definitely invest in a decent telephoto lens – I honestly think you'll regret it otherwise.)

And if you'd rather rent a lens than buy one, check out Borrow Lenses, where you can rent all sorts of lenses and camera gear.

If a safari is something on your bucket list, don't put it off! Southern Africa especially is very safe right now, and a strong US dollar means you can get a lot for your money.

Check out these tours that will include safaris like the ones I went on:

Is an African safari on YOUR bucket list? Are there any other tips you would give to first-timers? 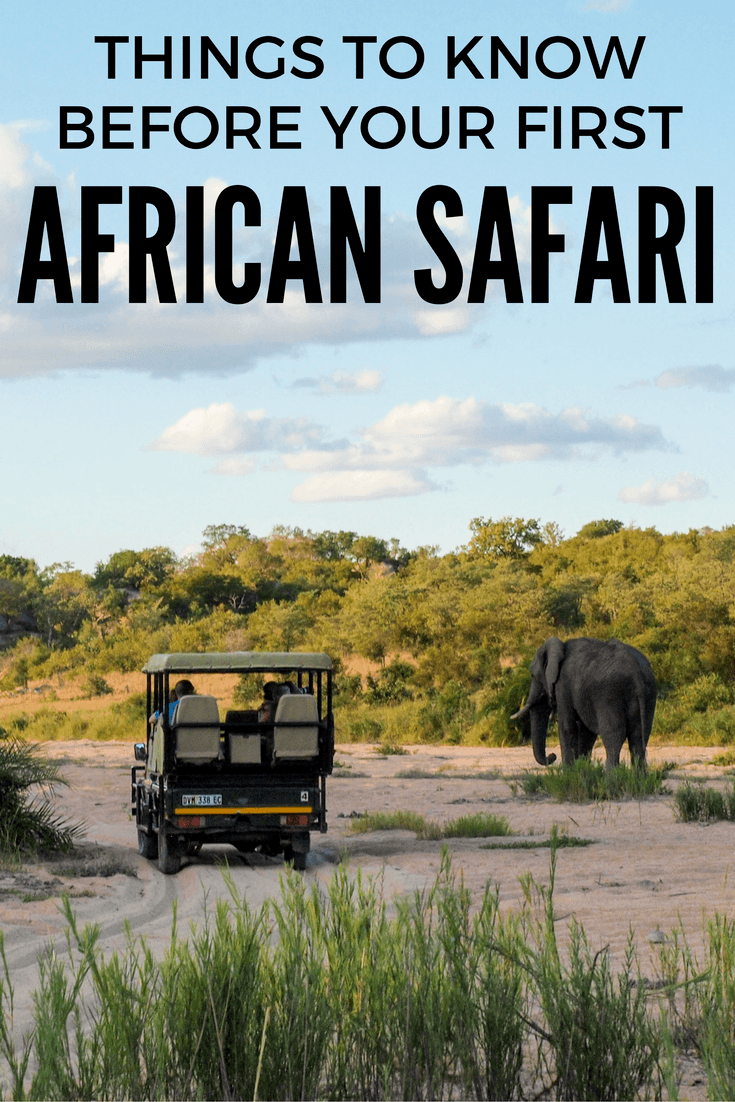