We rounded a corner and there in the road essentially right in front of us were the painted forms of a pack of wild dogs. Their Mickey Mouse ears swiveled as our safari truck sputtered to a stop, and one or two got up, the fluffy white tips of their tails fluttering in the light wind.

“I've been on safari more than a dozen times,” my friend David said in front of me, “and I have never been lucky enough to see these guys before.” 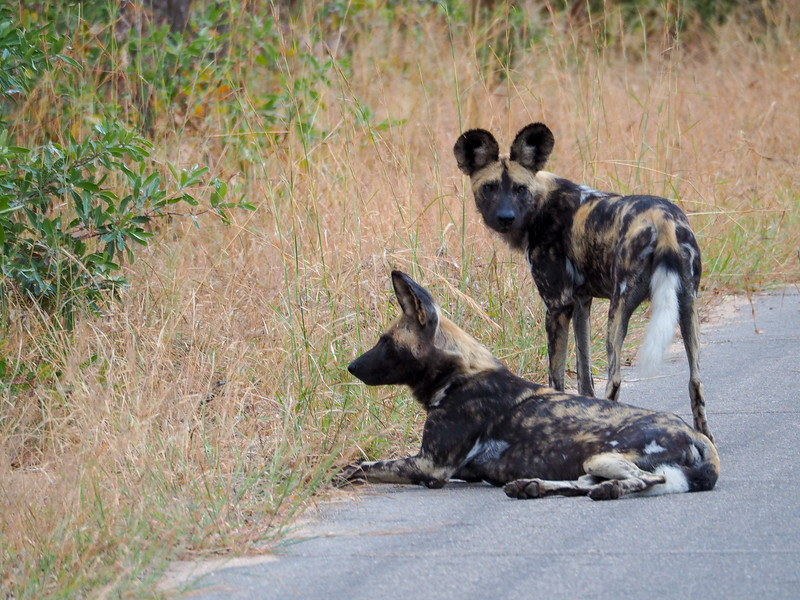 Going on safari in Africa is a dream for many people; it's that quintessentially bucket-list-worthy experience that basically everyone dreams of doing.

And what I learned from my own time spent on safari in Africa is that it is 100% worth the hype – because no two safari experiences will ever be the same. 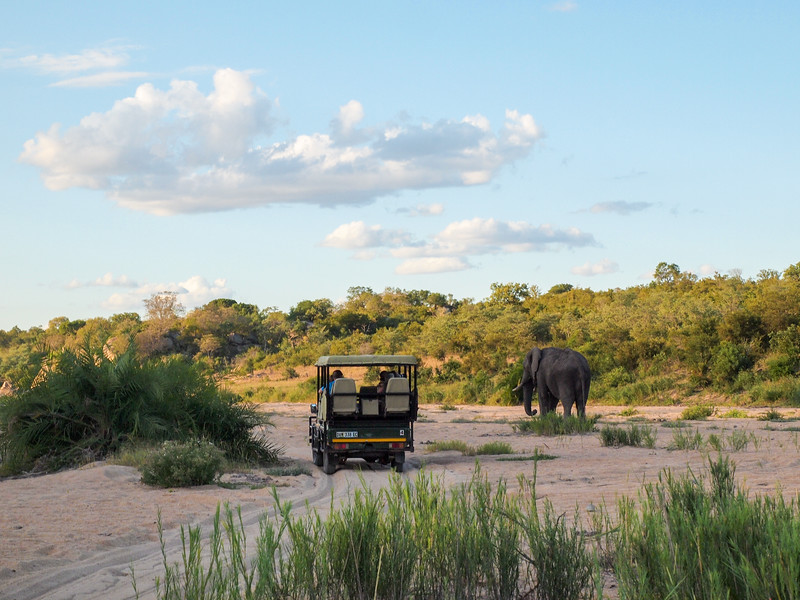 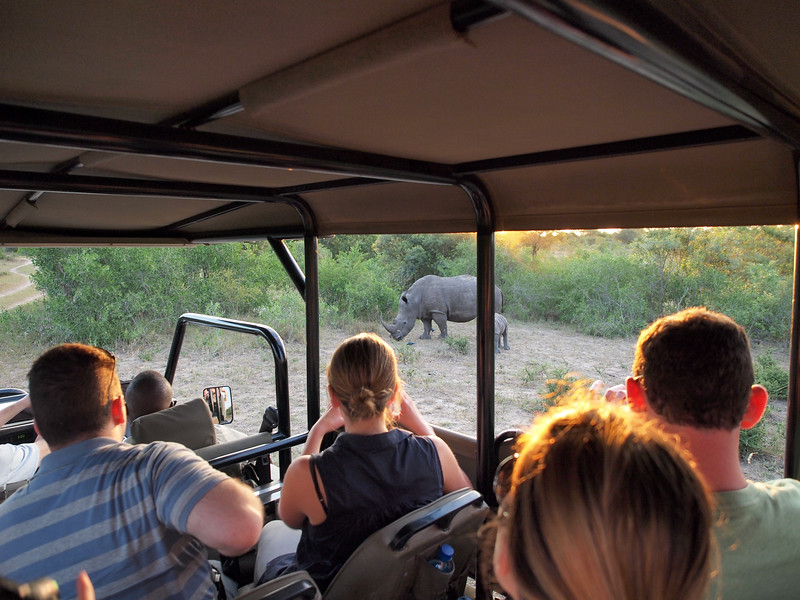 My safari experience began with arrival at the Skukuza airport from Johannesburg. Formerly a private-plane-only airport, you can now get to Skukuza via AirLink flights on South African Airways. The airport is tiny – just one runway – with a thatched roof and an open-air design that oozes Africa.

We were met by Lazarus, our ranger from the Jock Safari Lodge where we'd be staying, and ushered into a waiting safari truck. Safari trucks in South Africa are built with optimal wildlife viewing in mind, with open sides and stadium-style seating, and by the time we got to the lodge, we'd already been treated to an encounter with some giraffes. 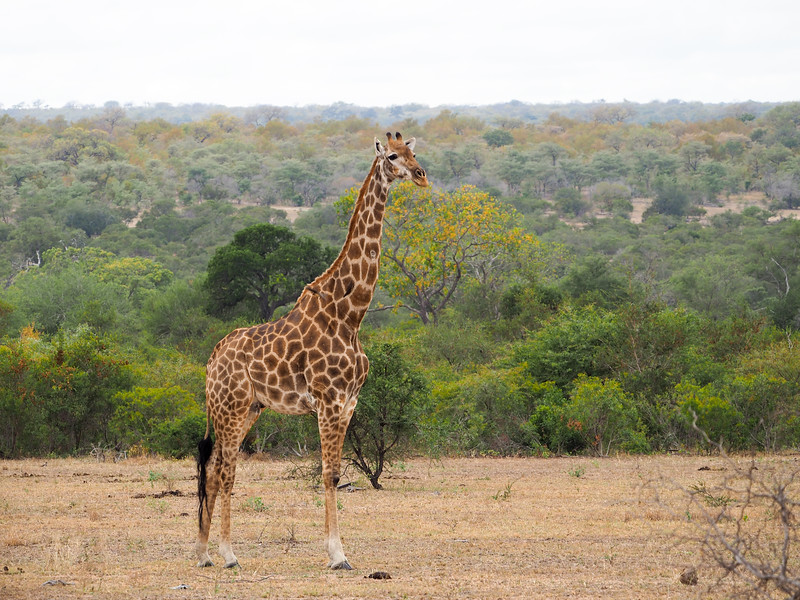 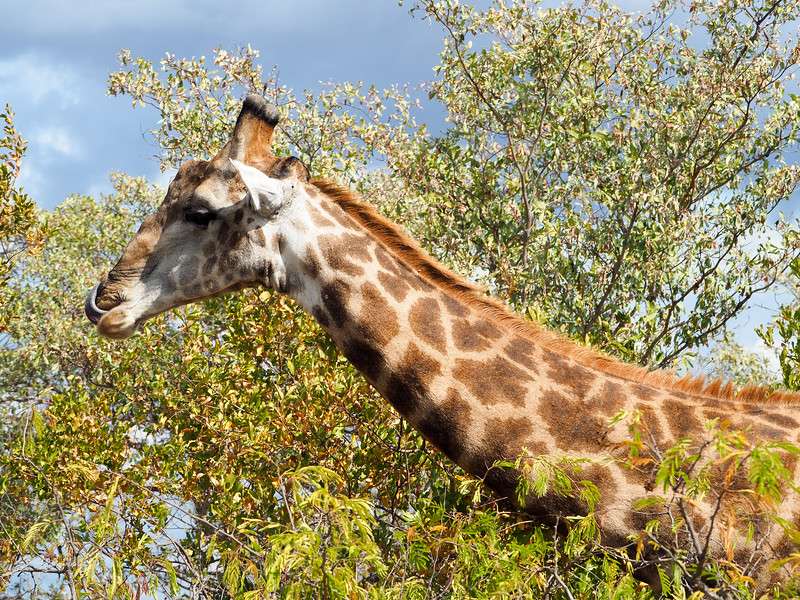 And it would only get better from there.

Traditionally, the “Big 5” were the five most dangerous animals to hunt on foot in Africa: the buffalo, elephant, rhino, lion, and leopard. And, while hunting is still legal in many African nations, the majority of the “shooting” these days is done with cameras.

The Big 5 today represents the top five animals that people hope to see on safari – and we were lucky to see them all.

In fact, we saw the Big 5 on our very first game drive into Jock's private section of Kruger National Park. Lazarus was incredibly talented at spotting animals in the bush (you wouldn't think that something like a rhino or giraffe could hide very well, but they can!), and also seemed to have a knack for being in the right place at the right time.

You may not look at a cape buffalo and automatically assume it's dangerous. But buffalo (and especially the lone males) can be incredibly unpredictable, often giving no warning before they charge at you. 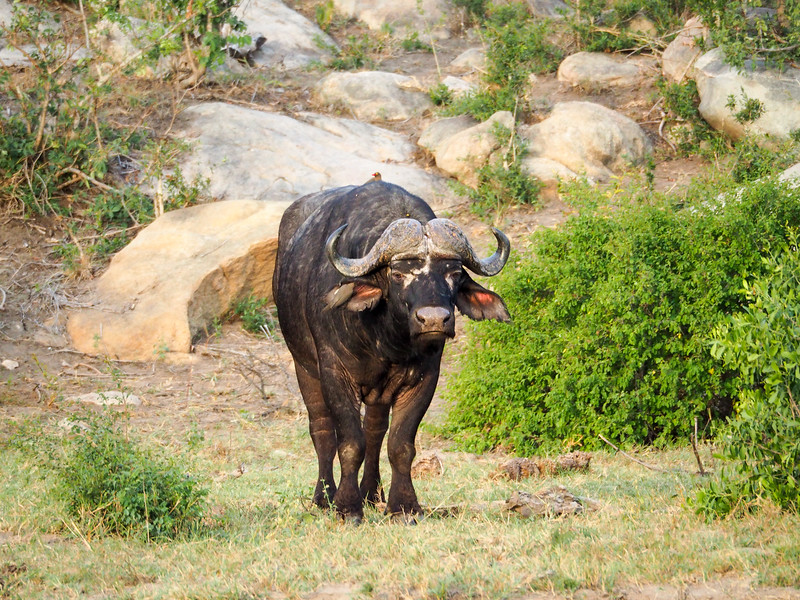 We saw plenty of buffalo in Kruger – huge herds, in fact. They aren't the prettiest animals, but I enjoyed watching the birds hopping all over them.

Elephants are some of my favorite animals on earth. I'm always amazed by how graceful and quiet they are despite their size, and never tire of watching their interactions with one another. Elephants have personalities that can rival the ones that we humans have! 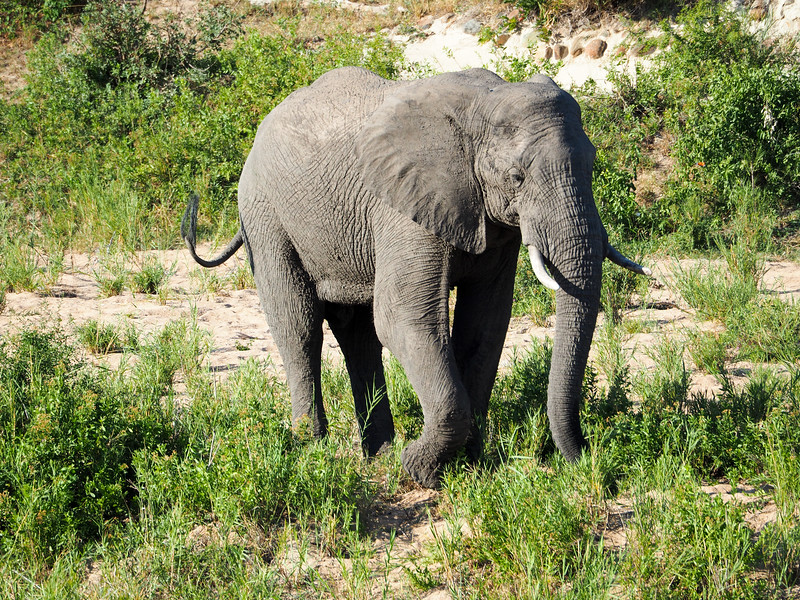 We saw quite a few elephants in Kruger: there were a few that ambled through the dried-up riverbed right in front of our lodge, a handful munching trees along the side of the road, and one particularly adorable family group that was playing and drinking in the riverbed. 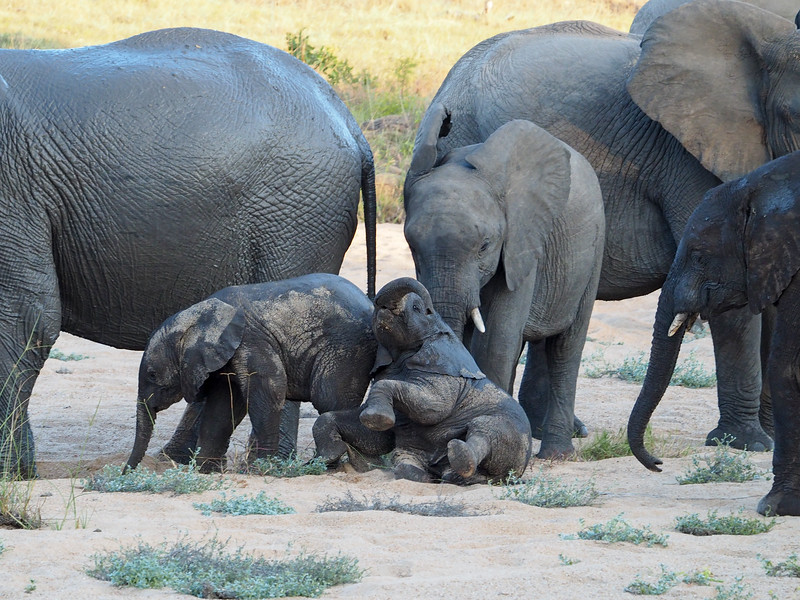 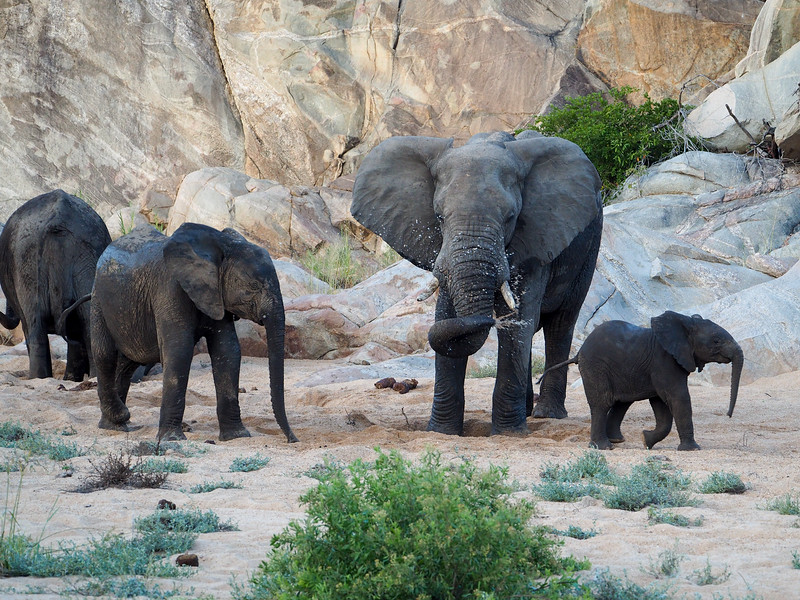 This family group had three fairly young babies, and we all were incredibly amused when they all decided to “charge” our safari truck. Cuteness overload.

Before going to Africa, I was aware of the plight of the rhino there. These animals are becoming critically endangered thanks to poachers killing them for their horns. Knowing this, I didn't really expect to see many in the wild. But guess what? There are still a LOT of white rhinos in Kruger! 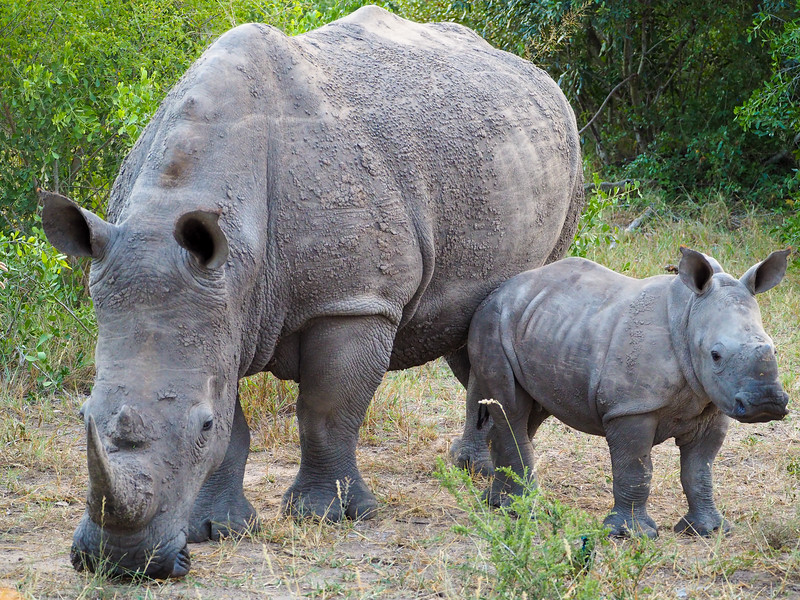 We saw close to a dozen on our first game drive, including a mama and young baby that grazed right alongside our truck for a while. 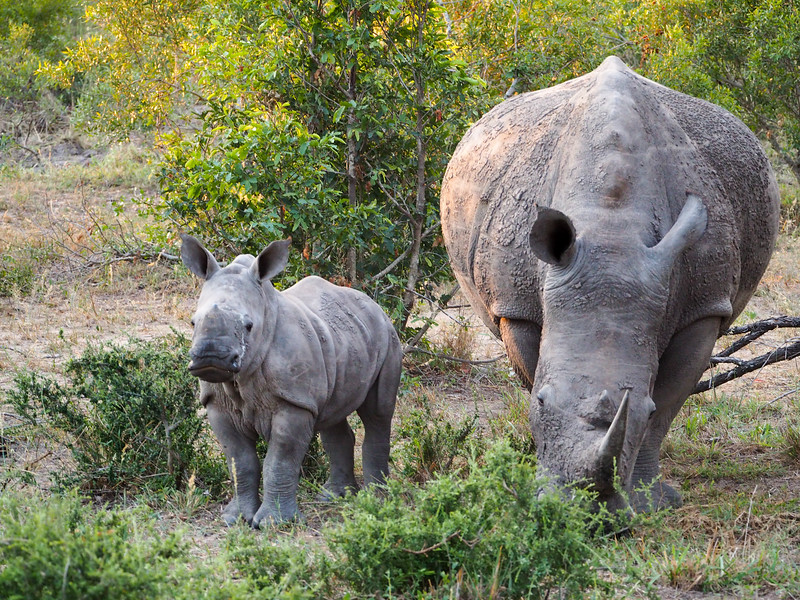 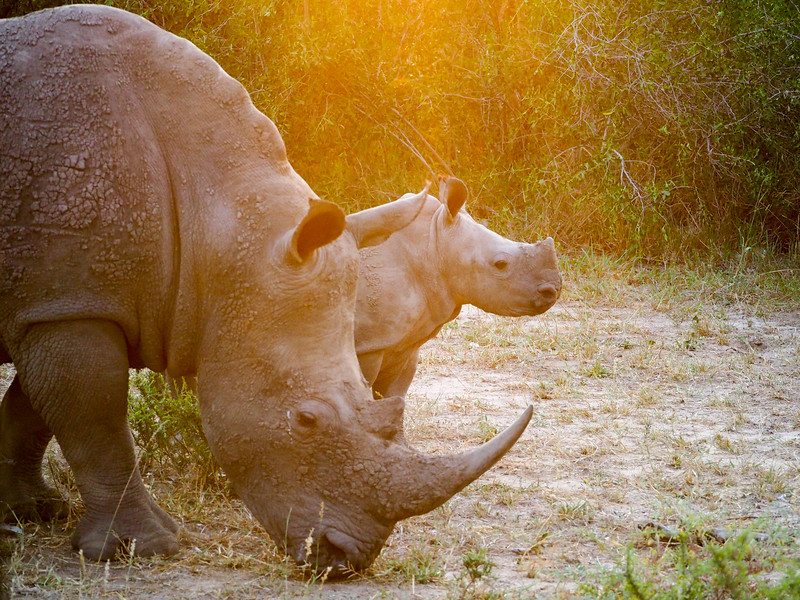 They baby – complete with adorable baby rhino rolls – was a treat to see. It gives me hope that perhaps we can still save these beautiful animals.

We probably had the most luck with seeing lions – in fact, we saw them on 3 of our 4 games drives. 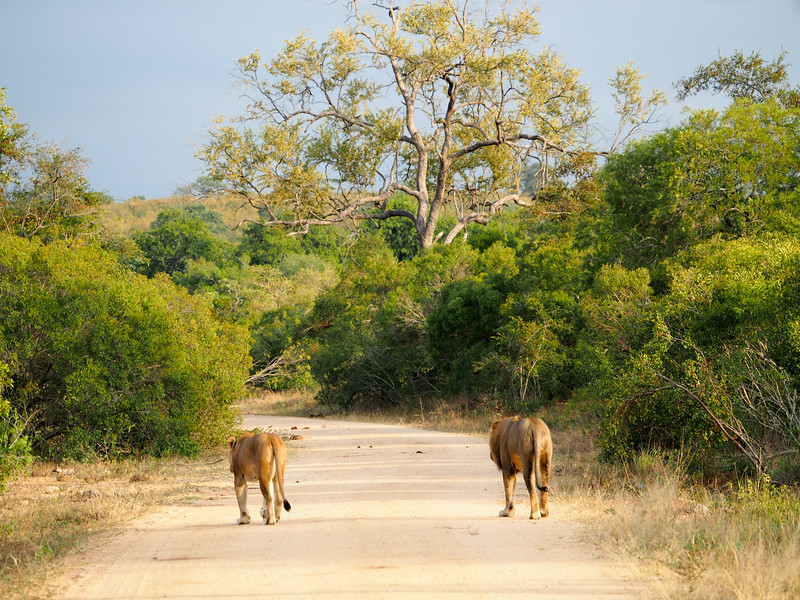 The first encounter was after dark on the first night, when we witnessed two male lions calling/challenging each other on one of the paved roads (you can listen to this in my video). The lions stalked down the road towards each other in a territorial dispute, and we nearly saw a real cat fight!

On the second day, we became voyeurs to a pair of lions mating (fun fact: lion sex only lasts for a handful of seconds, but when they are mating they do it every 10-15 minutes for days on end!). 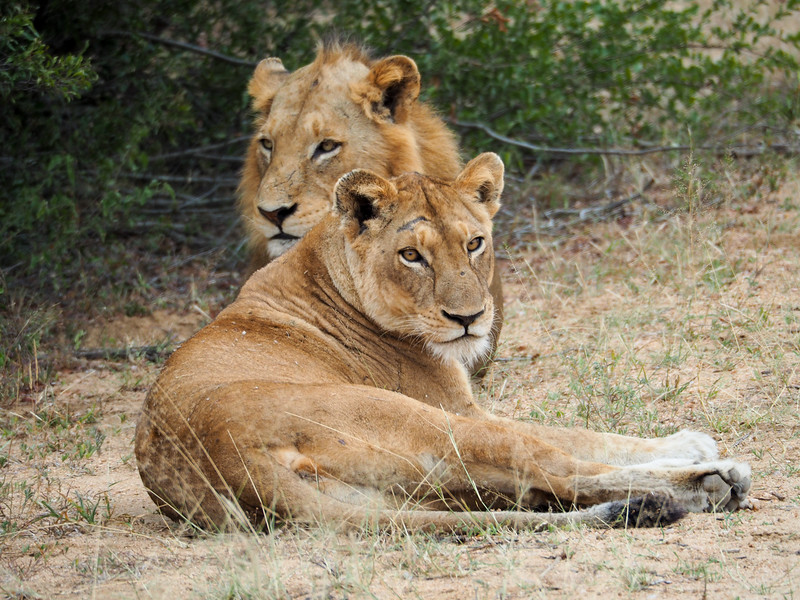 We also came across a group of four young males napping in the shade right alongside the road. 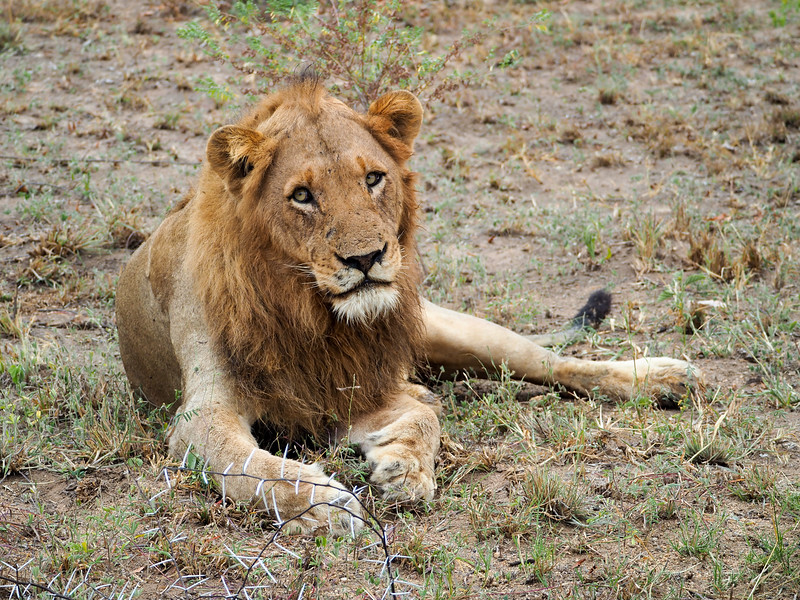 And, lastly, we met with a whole pride of young lions atop a rocky hill at sunset that evening. 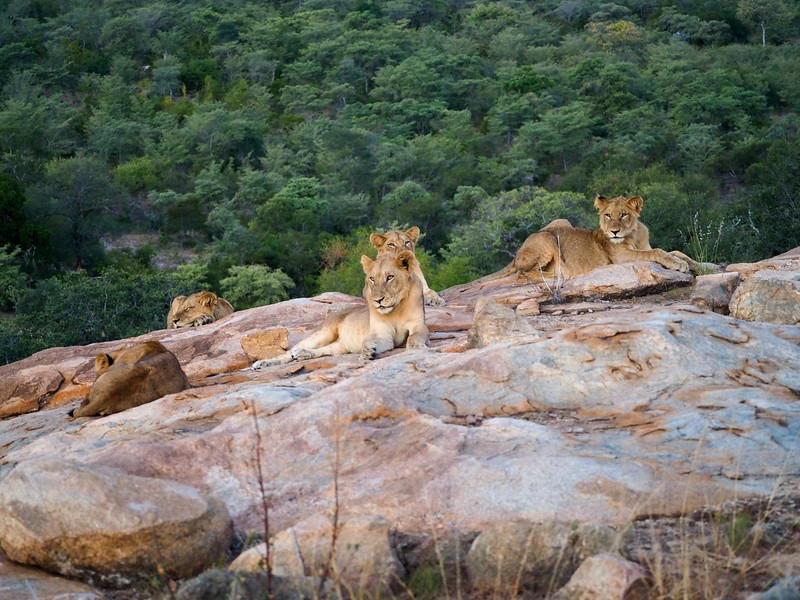 The teenagers were fascinated by the wheels on our safari truck, and one even “stalked” us for a while as we drove away!

Of all the Big 5, the leopard is definitely the most elusive. In fact, it's not uncommon for people to never get a glimpse of one on safari. This is because leopards are largely nocturnal and they are also quite shy – spotting them isn't easy!

At the end of our very first game drive in Kruger, we were just returning to the lodge to get ready for dinner when Lazarus came running back inside to tell us that there had been a leopard sighted just a few minutes away. So we piled back into the safari truck and went off-roading into the bush. We ended up spotting not just one but TWO leopards – a mating pair that were slinking through the bush together. 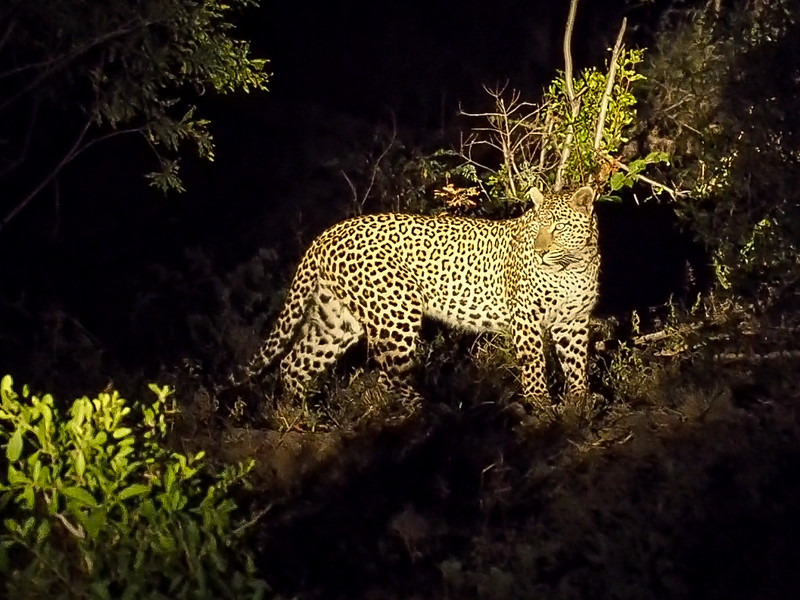 We held out hope that we'd be able to see one of the spotted cats during the day, but we didn't get to see them again in Kruger.

Even though it's the Big 5 that most people focus on while on safari, there are SO many other animals to see in Africa, too. We also spotted more giraffes, a few zebra, tons of antelope, baboons, warthogs, wildebeest, hyenas, and wild dogs.

On our last game drive, we witnessed a playful pack of wild dogs chase and then taunt a small group of hyenas – even though neither were animals on our Big 5 list, this was one of the most exciting things we witnessed, mostly because the dogs are so rare. Even Lazarus was cackling like a gleeful little kid as we followed the dogs on their mission. 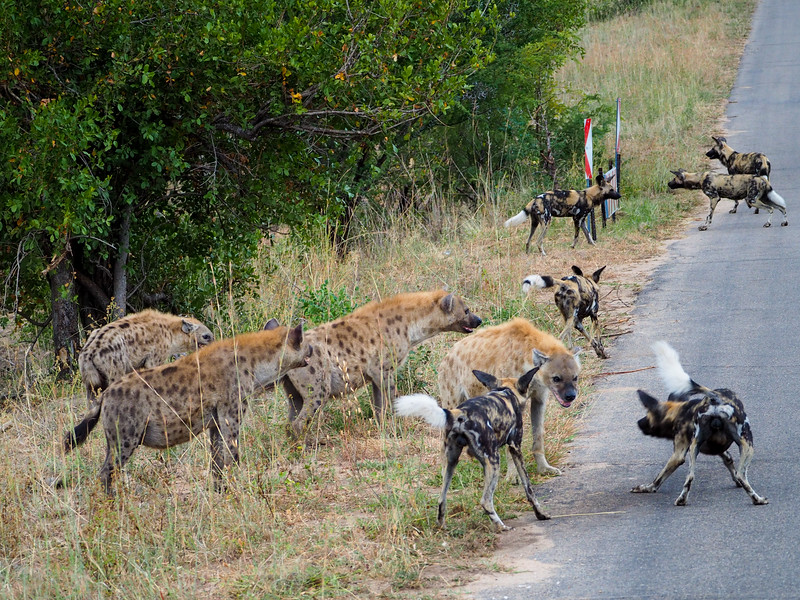 I expected to love being on safari – but the experience far exceeded my expectations.

It's one thing to see lions and elephants on TV or at the zoo, but it's another entirely to see them in the wild, with no fences or anything else stopping them from… well, just being wild! On more than one occasion, my dad and I would meet gazes across the safari truck and acknowledge just how special it was to be there, seeing it all with our own eyes.

This is one bucket-list item that is absolutely worthy of a top spot.

There are lots of options for safari lodging within Kruger National Park. The Sabi Sands area is incredibly popular, but I stayed at a smaller lodge fairly far away from any others. The Jock Safari Lodge blew me away with its luxurious rooms, great food, and friendly staff. 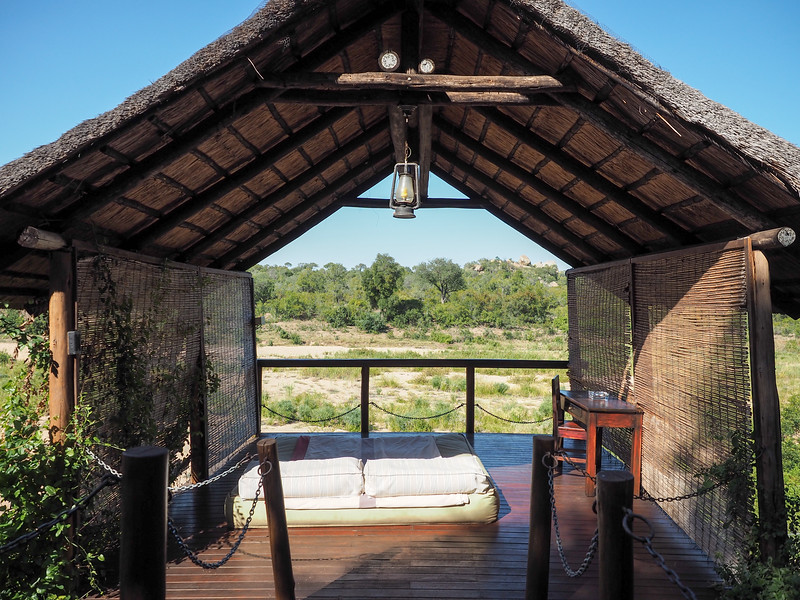 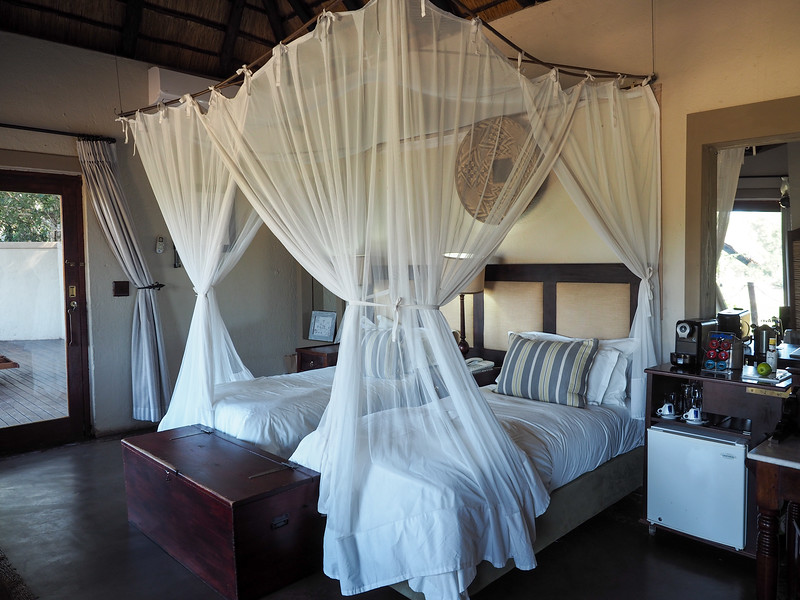 We stayed at Jock for two nights and went on four separate game drives (two in the morning, and two in the evening). We also had the option to go on a walking safari with head ranger Lazarus, which gives you an entirely different perspective on the wild African bush. 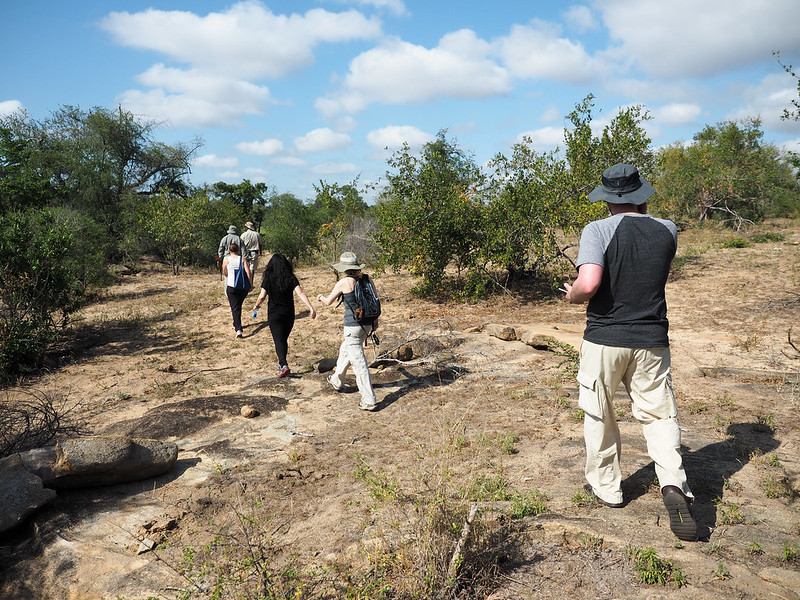 And, of course, you could also just relax on the daybed overlooking the riverbed and be almost guaranteed to see things like antelope and elephants!

If you're looking for a relaxing safari experience in a beautiful setting, I can highly recommend the Jock Safari Lodge (and no, I didn't get paid to promote them or even get any discounts – I just legit LOVED my time there!).

Is going on a safari on YOUR bucket list? If so, which animal would you be most excited to see in the wild?

35 Comments on “A Big 5 Safari in Kruger National Park”