Adventures in the Pyrenees

In some ways, I'm actually a pretty terrible traveler.

Traveling on and off for years, I've become complacent about certain things. Sure, I've learned how to pack better, how to find travel deals, and how to take better photos. But, the more I travel, the more I find myself going to new places after having done *very* little research on them.

A lot of times, this is actually great, though. Going in with few expectations means I have positive experiences far more often than negative ones.

Sure, I knew I would be eating tapas and seeing great architecture like Gaudi works in Barcelona, Plaza de Espana in Seville, and the Alhambra in Granada. But, outside of the major city sights, I had very few expectations about what I would see and do in Spain.

Which is probably why my mind was BLOWN when I went on a post-conference press trip to the Pyrenees. 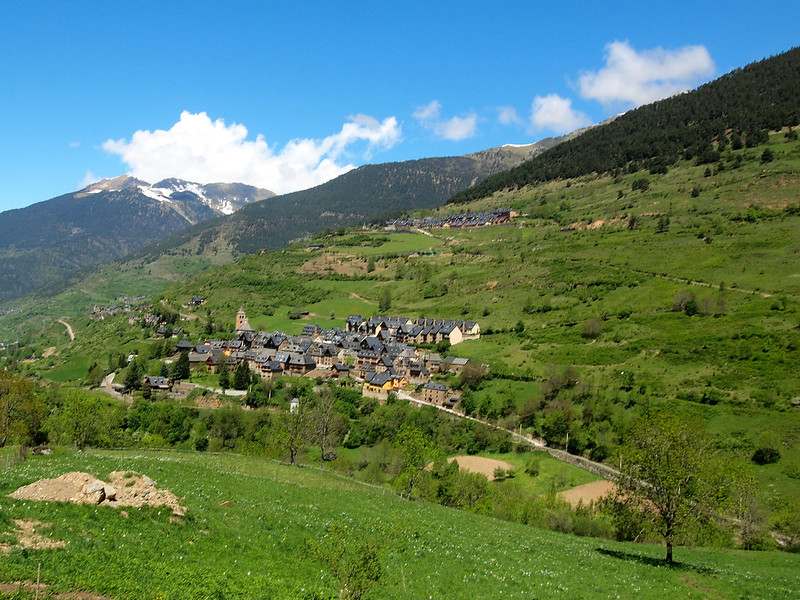 The Pyrenees mountain range forms a border between France and Spain. I got to spend a couple days in the mountains in the Lleida province of the Catalunya region of Spain. (Though, of course, locals will tell you it's not really Spain! But my map says it's Spain, so we'll stick with that to make things less confusing…)

This part of Spain was SO different to what I knew I would find in cities like Seville and Barcelona. It was much more remote. Much more mountainous. And much more beautiful than I ever expected. 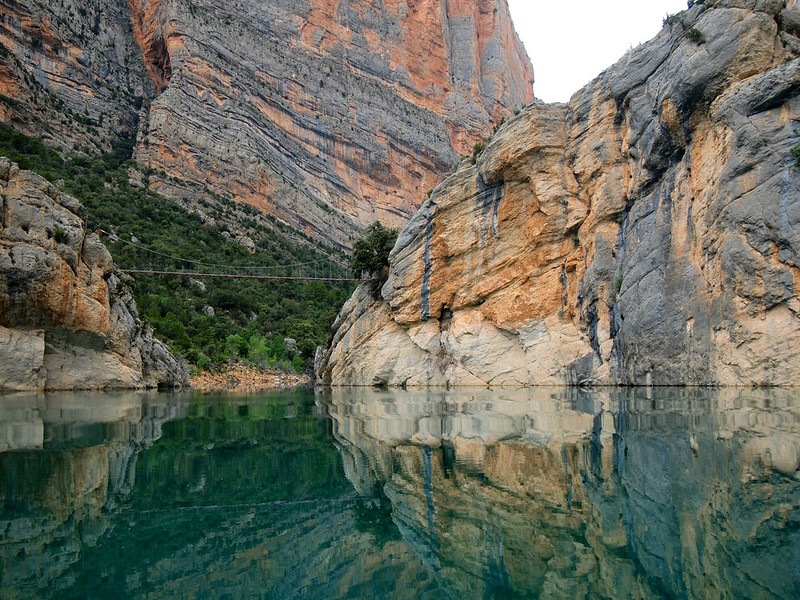 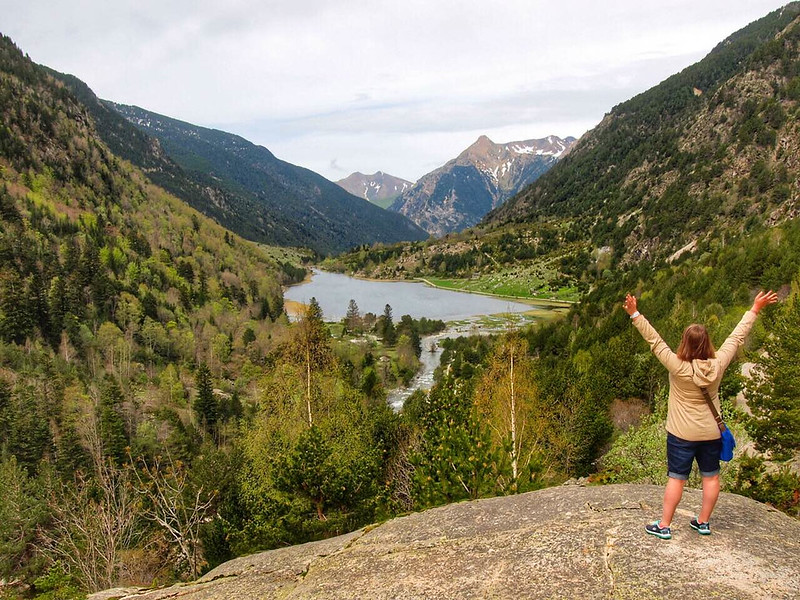 Three days in Lleida wasn't nearly enough time to really experience all the adventures the Pyrenees have to offer, but it at least gave me a nice taste – and convinced me that I absolutely have to go back.

Here's a taste of what I got up to:

I suppose, with the Pyrenees being a mountain range and all, I shouldn't have been so surprised by the landscapes in this part of Spain. But I absolutely was.

Our first adventure was a boat tour through the Mont-Rebei Gorge with Montsec Activa. Located near the small town of Ager, I think it's safe to say that this spot blew us all away – which is saying something when “us” is a group of travel bloggers who have seen cool things literally all around the world. 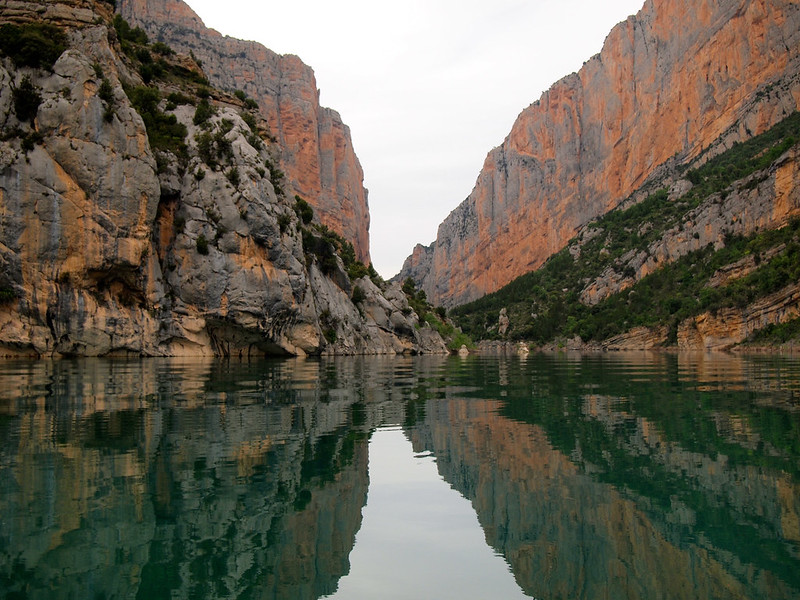 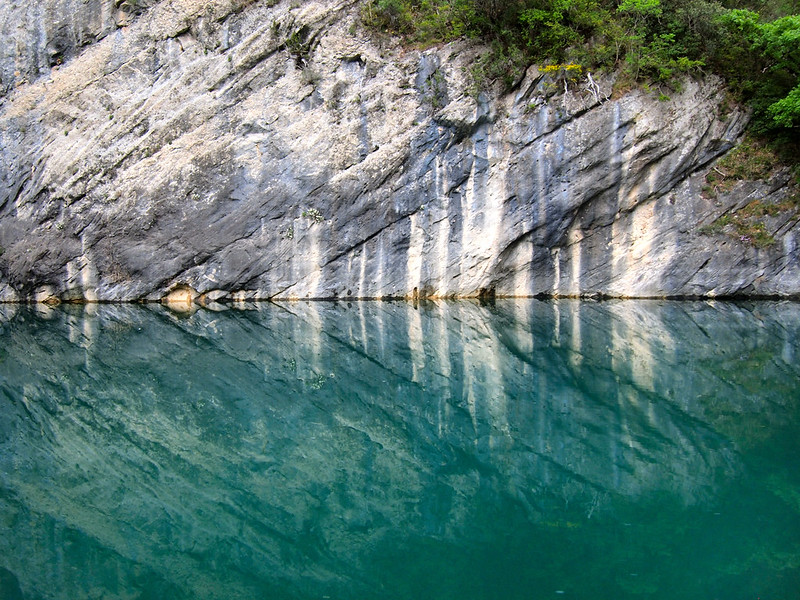 At first we were bummed that we weren't kayaking through the gorge (which was in our original itinerary), but it turned out for the best. Being in a speed boat meant that we got to see some much more of the scenery. 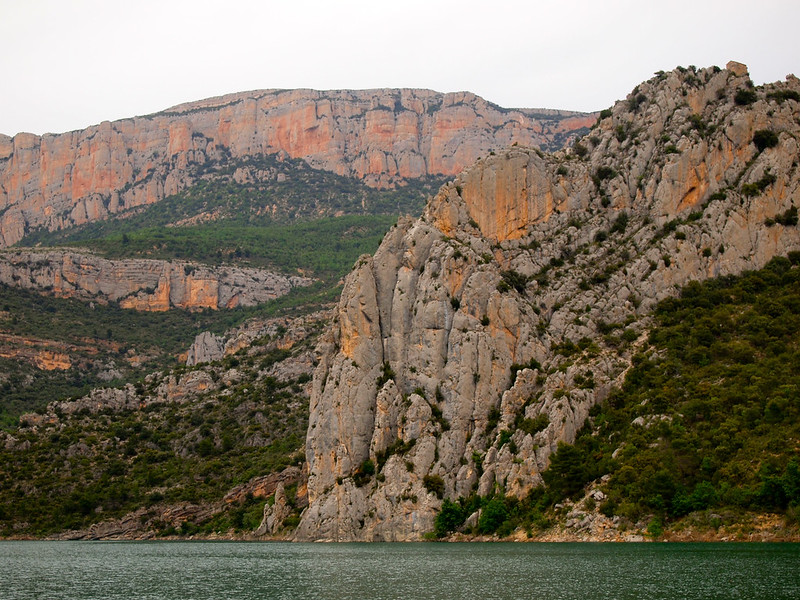 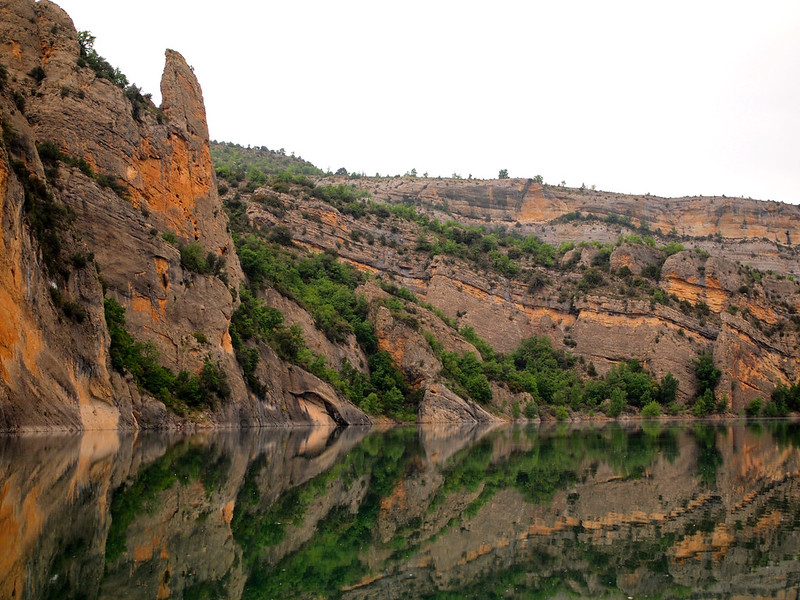 There's a hiking trail here, hewn into the rock high above the water and connected by precarious-looking steps hanging off the rock face. I would love to go back someday and hike it (and that's something coming from me, a self-professed non-hiker). 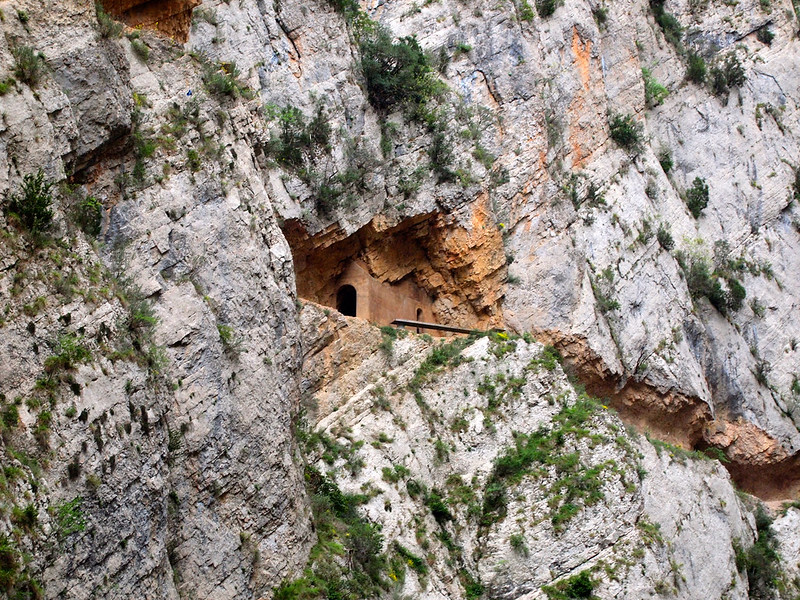 Hiking in a national park

Our first stop the next day was Aigüestortes i Estany of Saint Maurici National Park (a mouthful, I know). This is one of 15 national parks in Spain – and the only one in Catalunya. The park is unique in that the only way in is on foot. You can drive to one of the park entrances, but there's no road (and therefore no vehicles) inside the park itself. 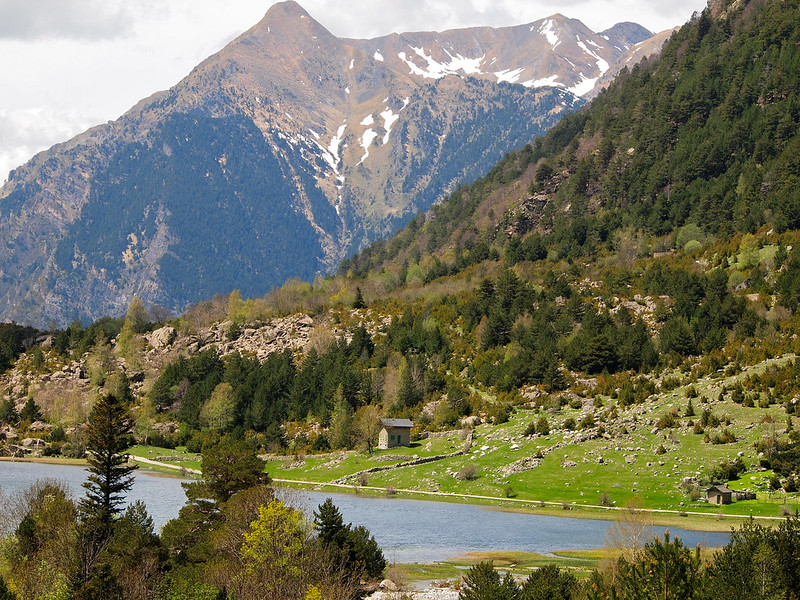 We took off on foot for an easy “hike” around one of the park's more than 300 lakes. 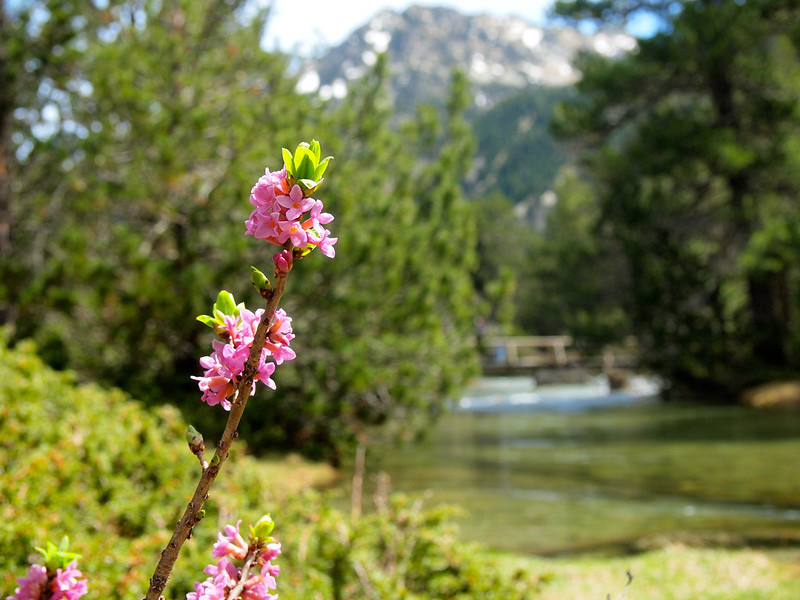 Yet again, the landscapes here blew me away. Even though I'm neither a hiker nor camper, I can absolutely understand why many people buy 5-day park passes here and pay to overnight in the park's lodges (there's no camping allowed here either). 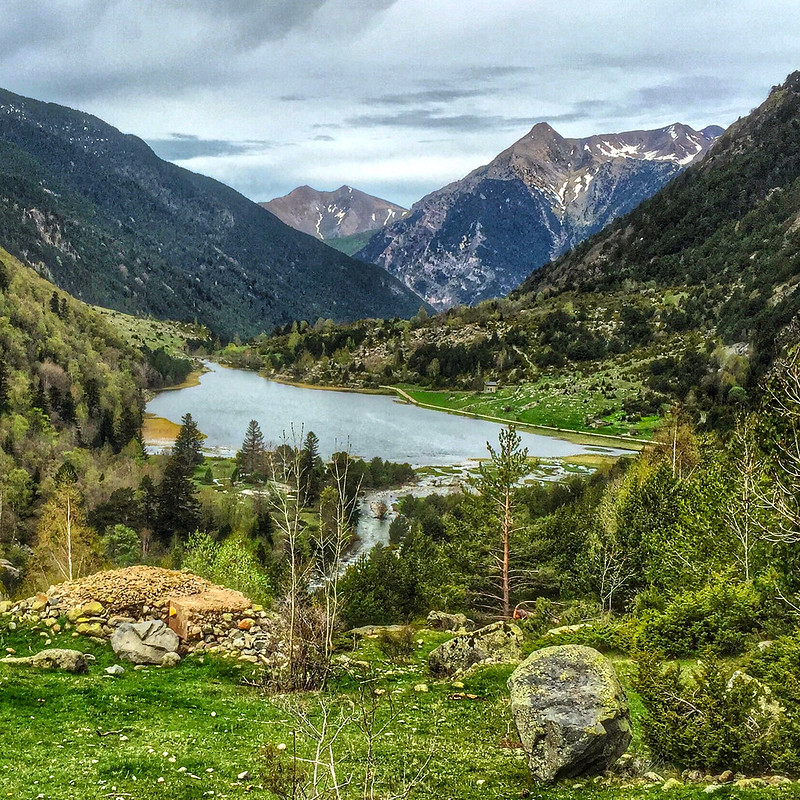 Even though most of us would have enjoyed staying in the park longer, we left the park around lunchtime and spent the afternoon church-hopping. 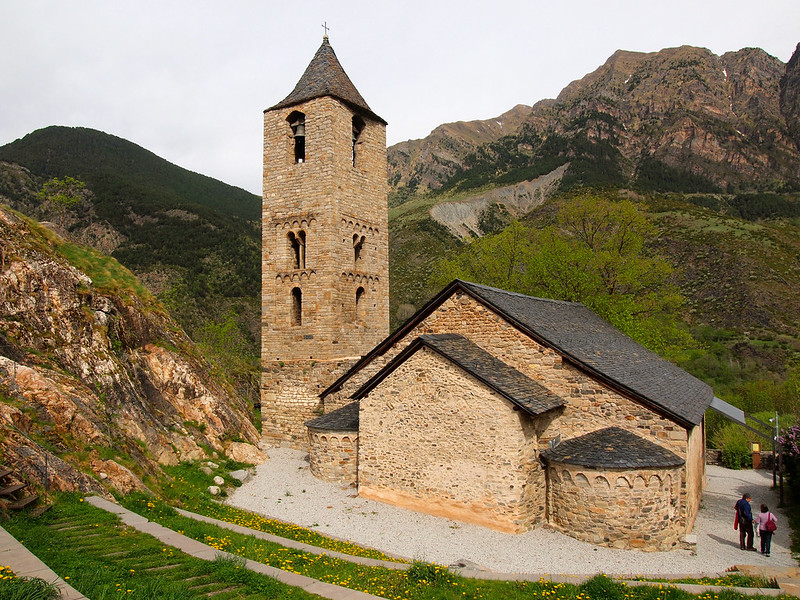 In this part of Spain (and in the Vall de Boi especially), you can find Romanesque churches dotted in nearly every mountain village. These churches are recognized collectively as a UNESCO World Heritage Site, being recognized for their art and architecture. 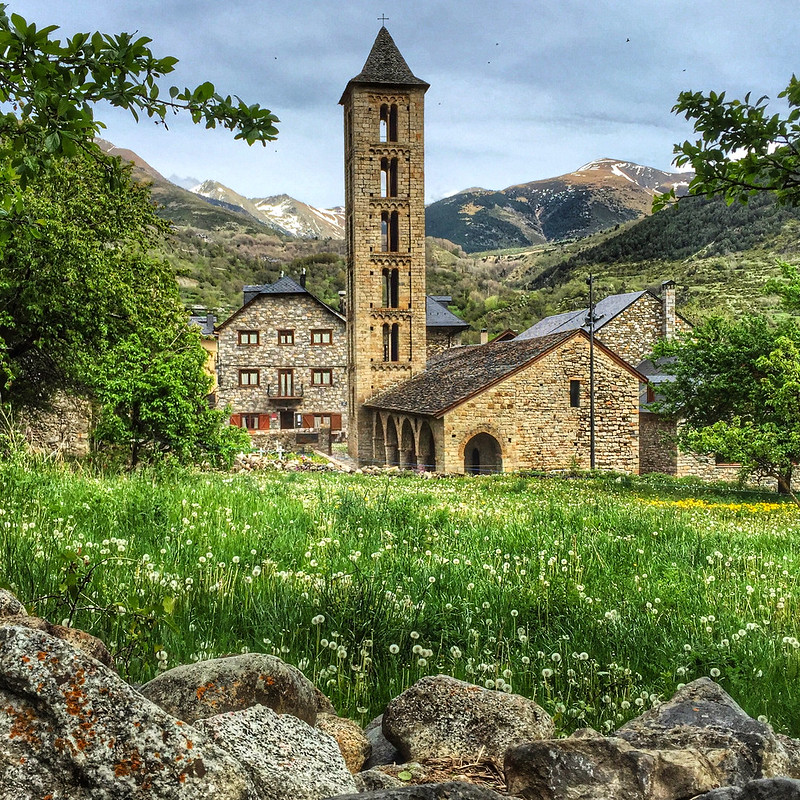 My favorite church was probably Sant Climent de Taüll, which originally held a magnificent Romanesque fresco. The majority of the fresco was removed in the early 1900s (you can now see it in the National Art Museum of Catalonia in Barcelona), but the church has come up with a clever way of showing people what it originally looked like: they project it onto the church's apse. 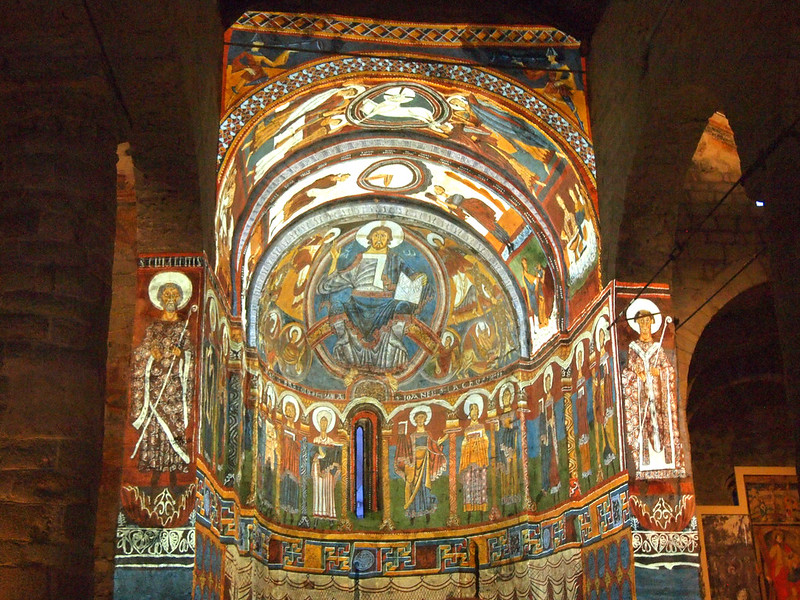 If you time your visit right, you can watch a projected “show” that demonstrates how the original fresco would have been painted. I've never seen anything like it before!

Our last day in the Pyrenees had us taking to the mountains on horseback. I LOVE horseback riding, and being able to do it in such a pretty setting was the perfect way to cap off the trip. The ride wasn't easy (at least one of the bloggers on the trip was terrified the whole time), but I enjoyed every second of it. 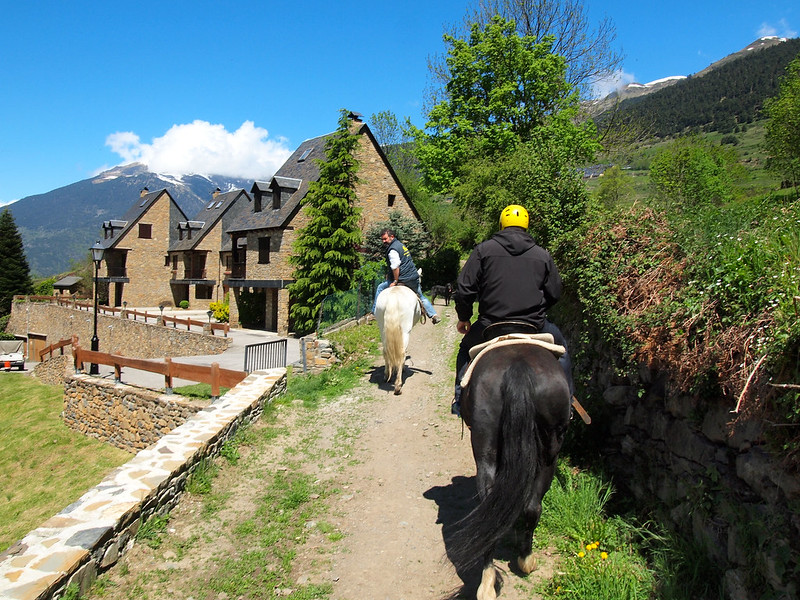 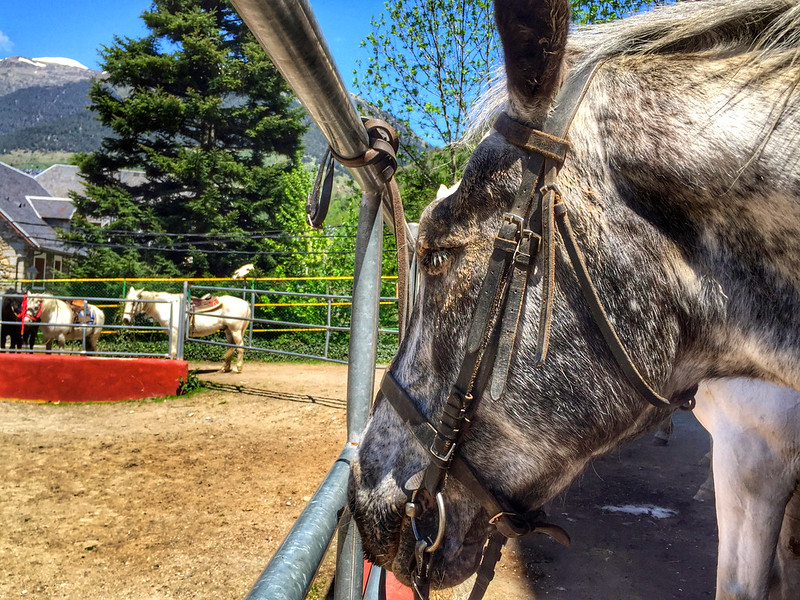 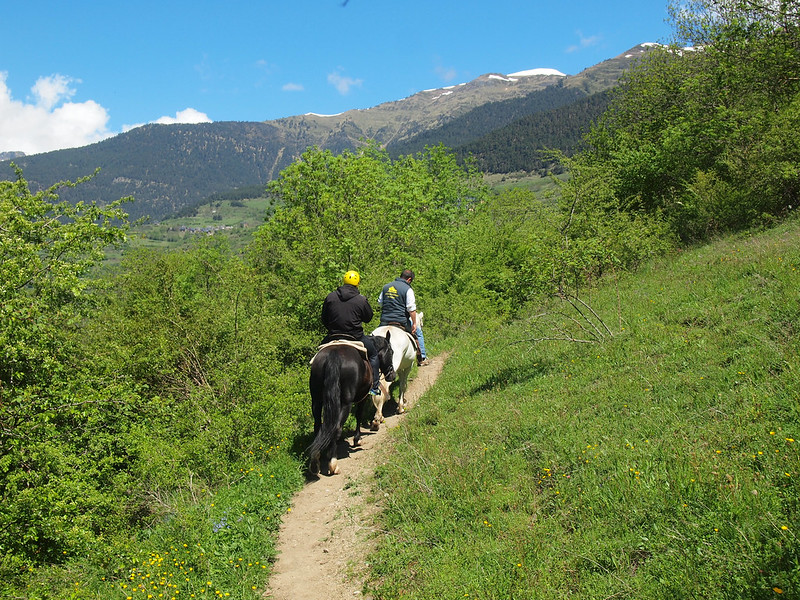 Having only seen the city side of Spain previous to this, a trip into the Pyrenees was just what I needed to really get a feel for the diversity of this country. And now I'm convinced that Spain is one of my favorite countries in Europe!

Have you ever been to this part of Spain? If not, is it what you expected? 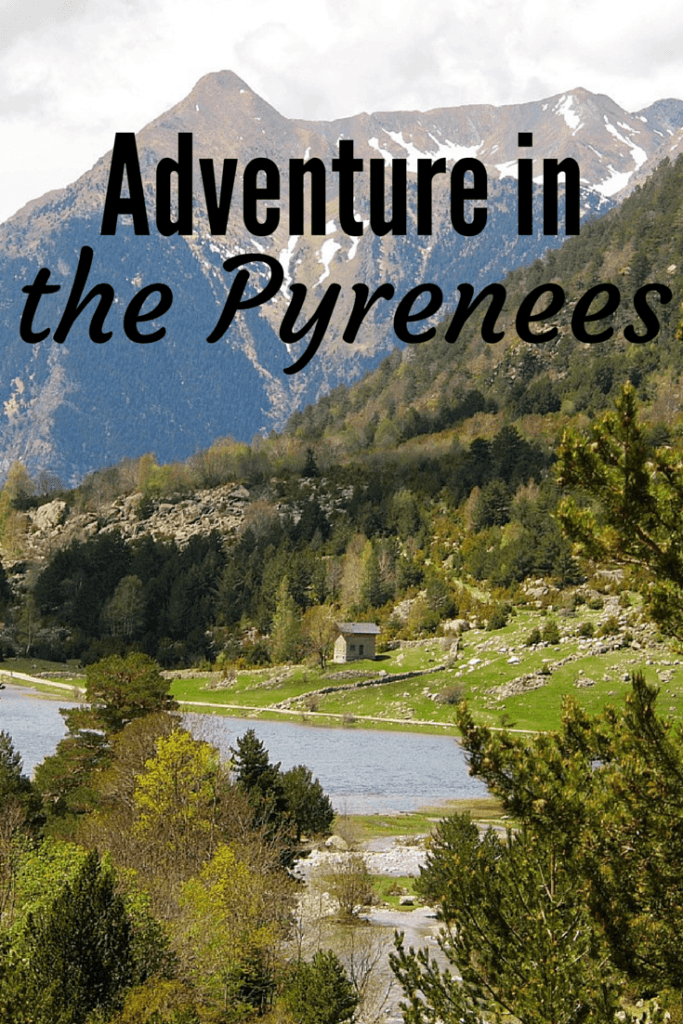 23 Comments on “Adventures in the Pyrenees”