After falling in love with Barcelona and its awesome architecture, I was reluctant to board the morning AVE train bound for Seville. I'd only had a few days in Barcelona, after all — not nearly enough time! But Seville, a city I've wanted to visit longer than anywhere else in Spain, was calling.

And so I went. 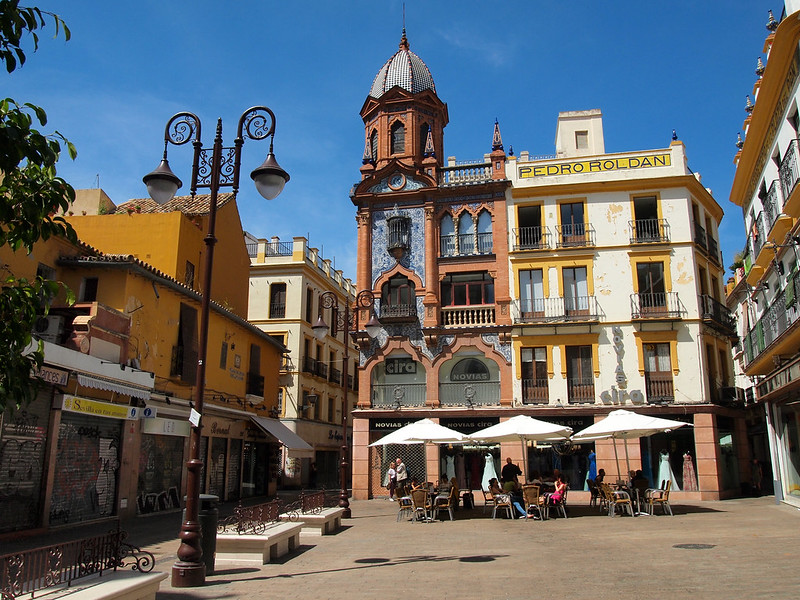 Seville, located in Spain's southern Andalusia region, has always been intriguing to me. With its flamenco soul and Moorish history, I knew I would get a glimpse into a completely different side of Spain here. I did a couple of tours, spent a day at the spring Feria (more on this later), and generally just let myself get wonderfully lost in the narrow streets of Seville's Old Town.

Thankfully, Seville completely lived up to my expectations; I quickly found myself falling in love with yet another Spanish city.

Here are some of my favorite photos from my four days in Seville:

The covered walkways at Plaza de Espana, built in 1928 for the Ibero-American Exposition of 1929. This was my first must-visit spot in Seville (I've been dreaming of it for years), and it was even bigger than I expected — but just as awesome as I hoped: 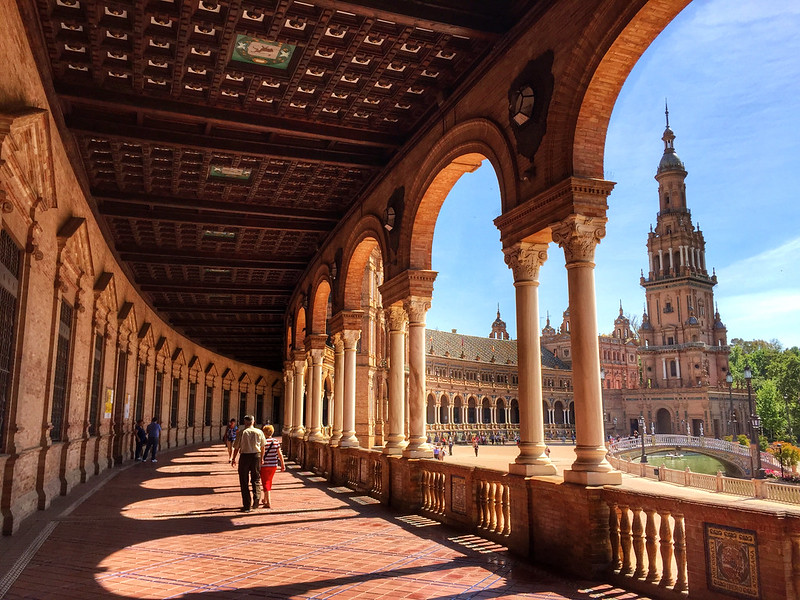 The Metropol Parasol — or, simply, Mushrooms — grows over a multi-story shopping center near La Encarnación square in the Old Town: 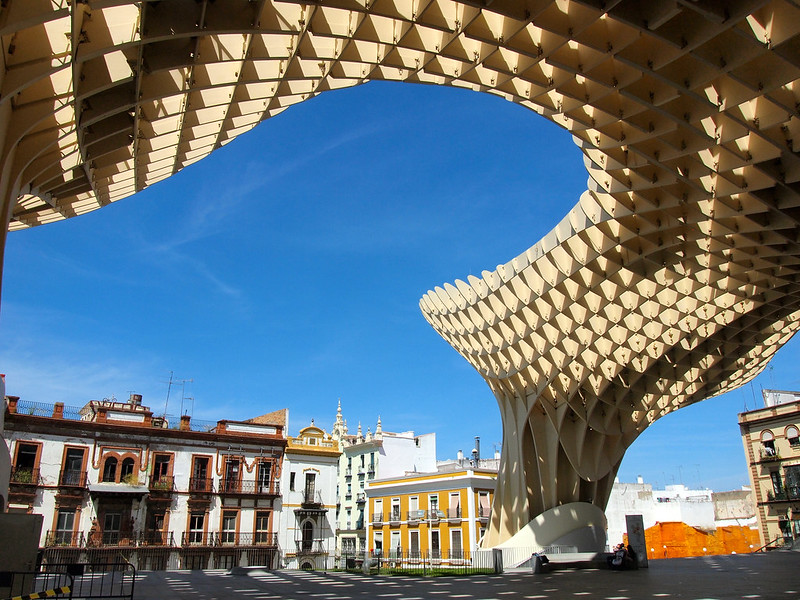 Horses and carriages waiting outside Seville's Cathedral (Catedral de Santa María de la Sede). And no, your eyes aren't deceiving you — this place is HUGE. It's the largest Gothic cathedral in the world: 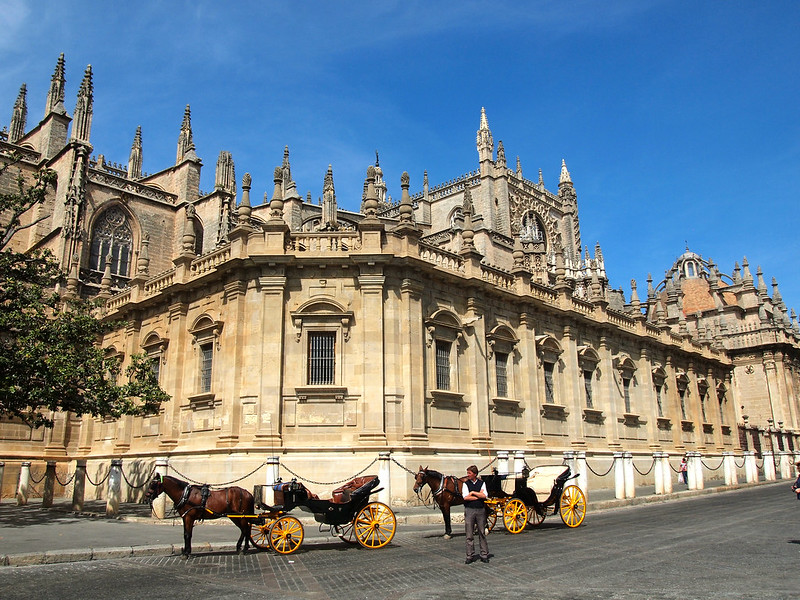 The gardens at the Alcazar, the royal palace in Seville. Recently, these were used in Season 5 of Game of Thrones, standing in for the Water Gardens of Dorne: 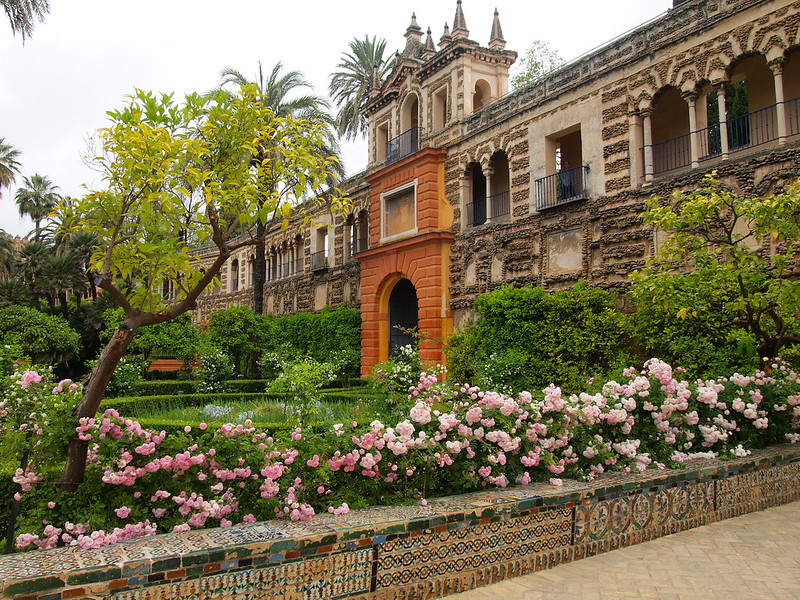 The Palace of San Telmo today acts as the seat of Andalusian government. When it was originally built in the 1600s, though, it was a marine academy. It's also served as a royal palace and a seminary over the years: 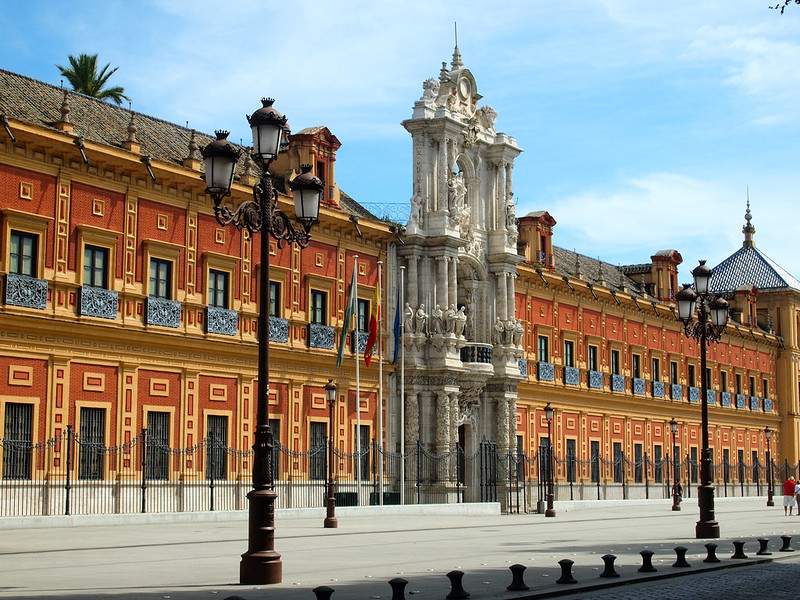 Loved this rounded building in the Old Town near the Cathedral: 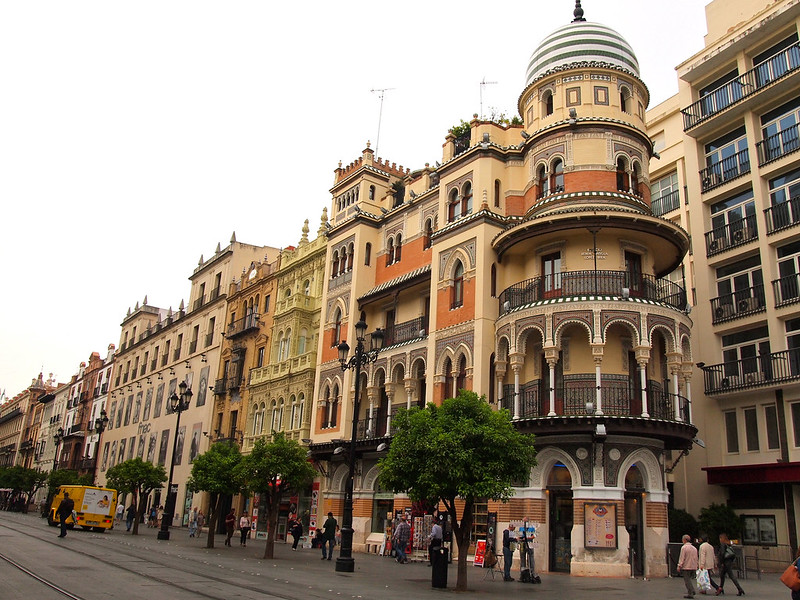 Tiles inside the Royal Alcazar — the palace was built by the same people who built the Alhambra in Granada, so you'll find similar Moorish designs and patterns here (even though the king who ordered the Alcazar built was a Christian): 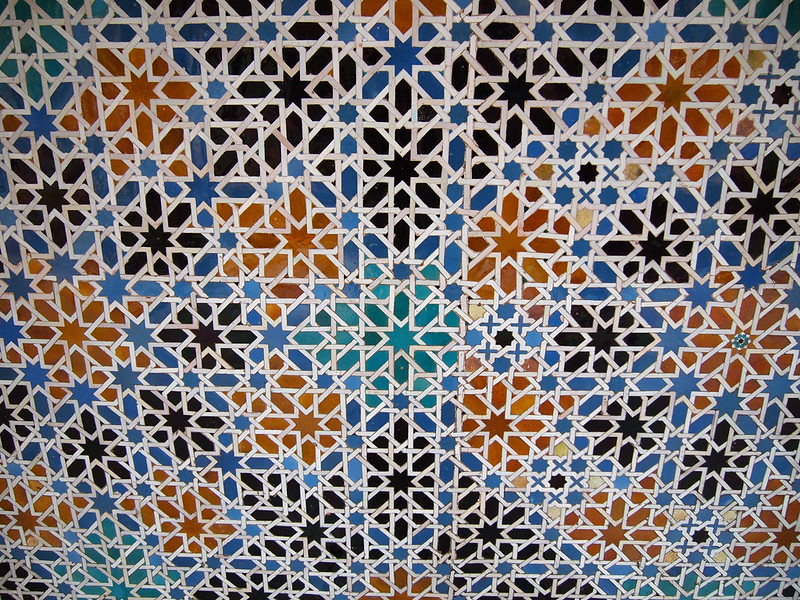 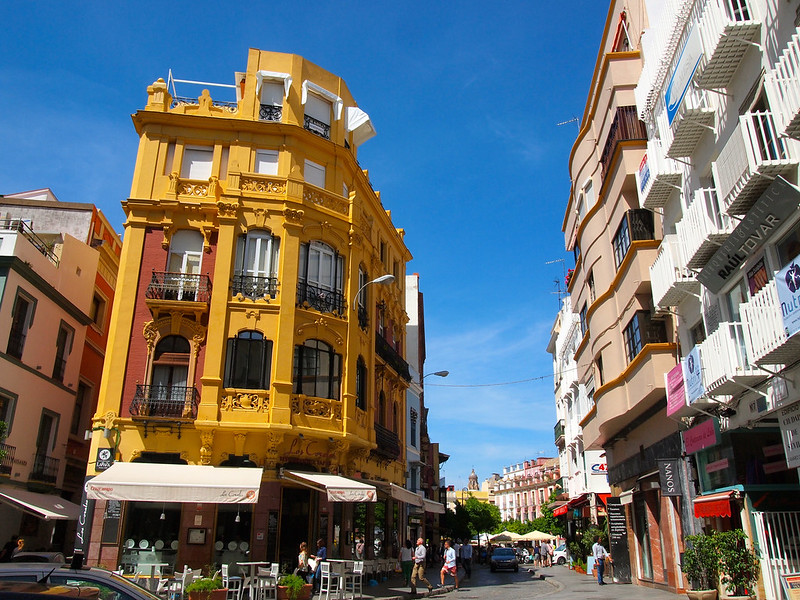 Another look at Plaza de Espana — this one gives you a better idea of how huge it is: 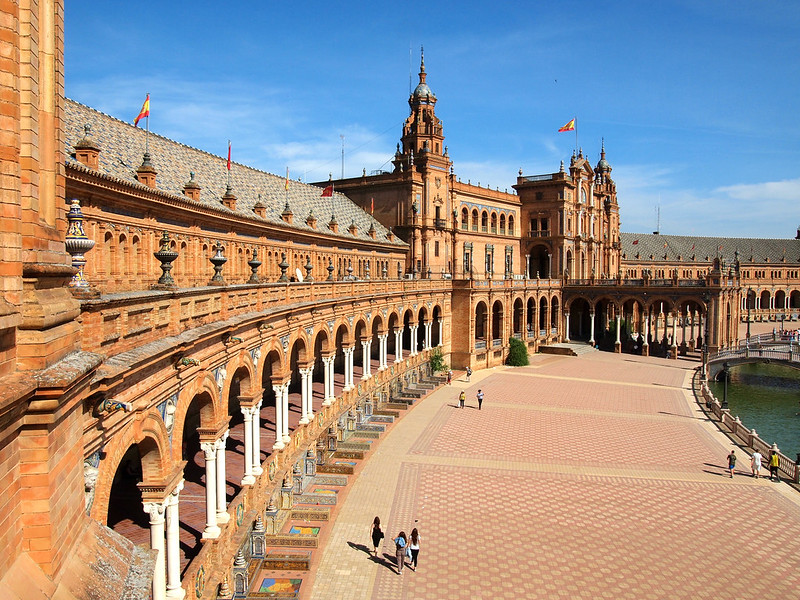 Behind Seville's Cathedral sits the Giralda, the giant bell tower. It was originally built as a minaret and stands more than 104 meters (341 feet) high. This photo only captures the bottom half of it: 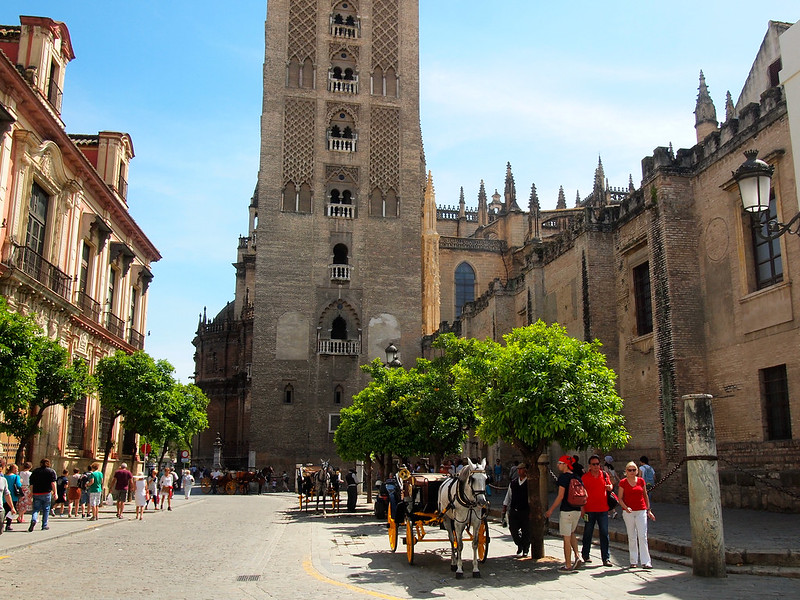 The incredible detail inside the Alcazar: 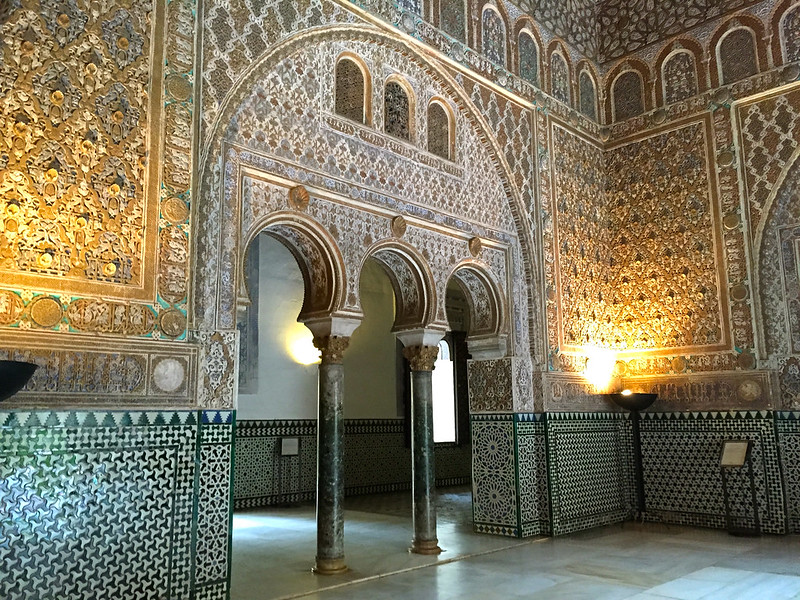 Another angle of the Metropol Parasol: 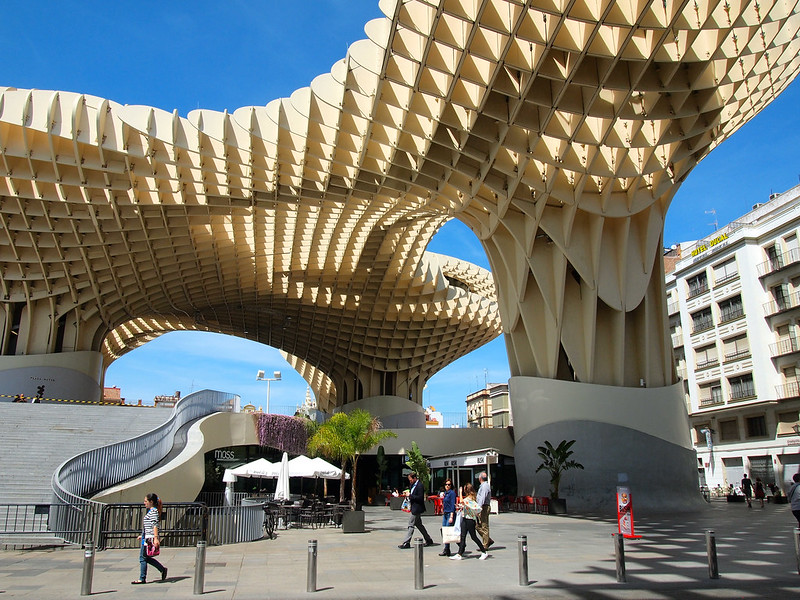 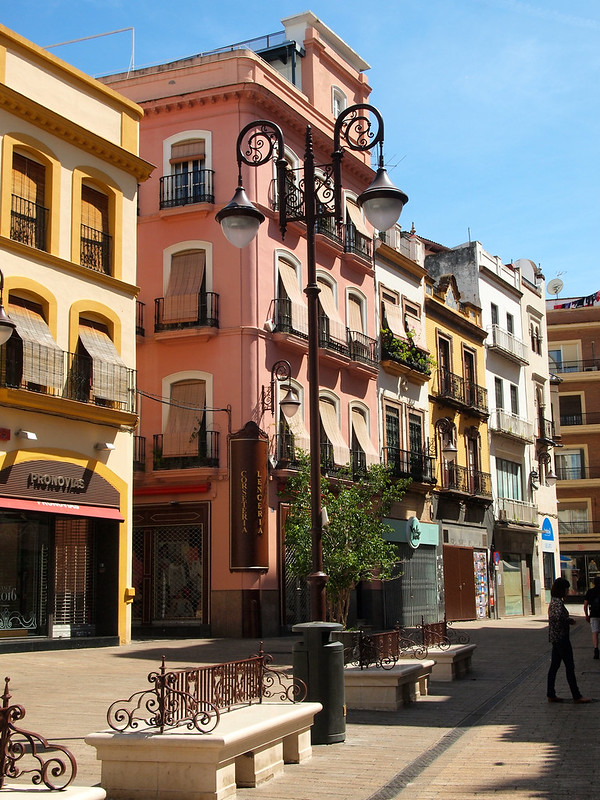 Archways and a courtyard inside the Royal Alcazar: 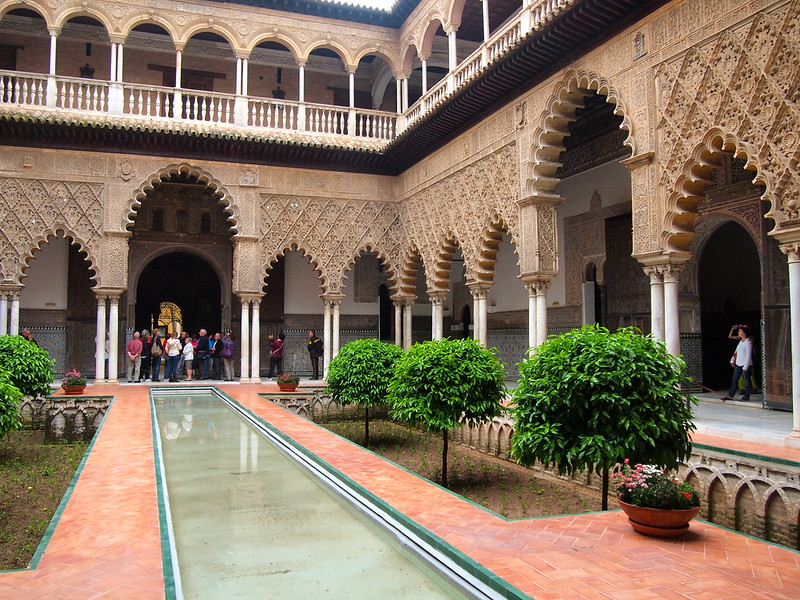 The Torre del Oro (“Tower of Gold”) on the Guadalquivir river. 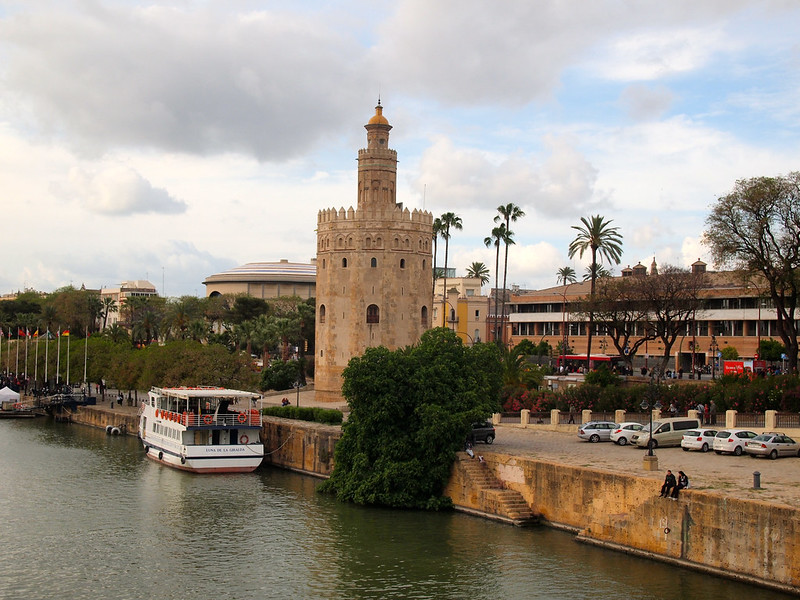 One more shot from Plaza de Espana, this time focusing on the tiled Province Alcoves — one for every province in Spain. 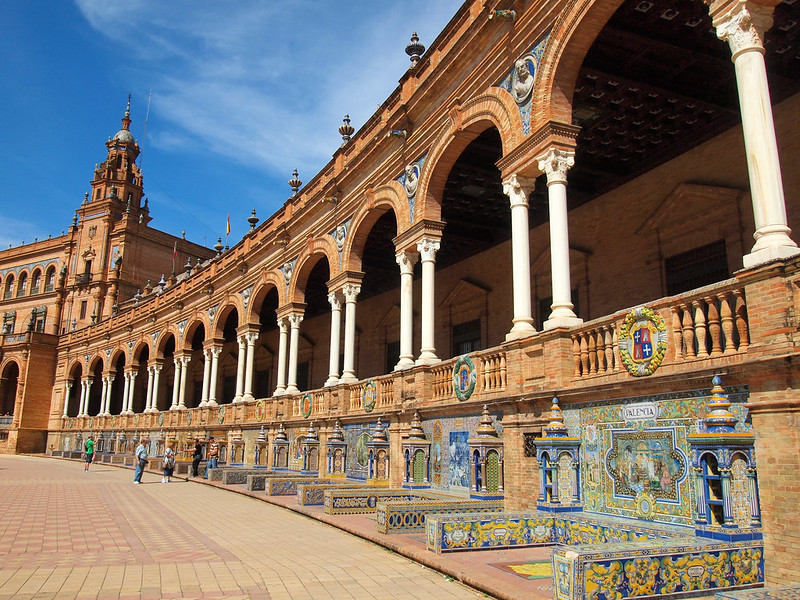 A sneak peek into Seville's annual Feria (April Fair). But, like I said, more on this later!: 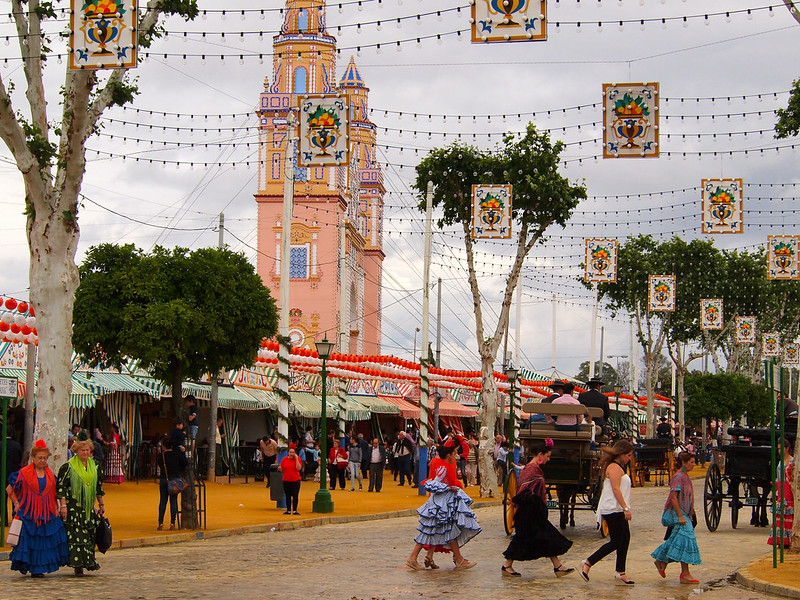 I was in Seville during 3 of the coldest, cloudiest days the city had seen this spring, and yet it still managed to capture my heart. I already can't wait to go back!

Where to stay in Seville

Anywhere within Seville's Old Town would be ideal for seeing all the best sites AND seeing the Semana Santa celebrations. My picks would be:

Which photo is your favorite? Do any of them make you want to go to Seville right now? 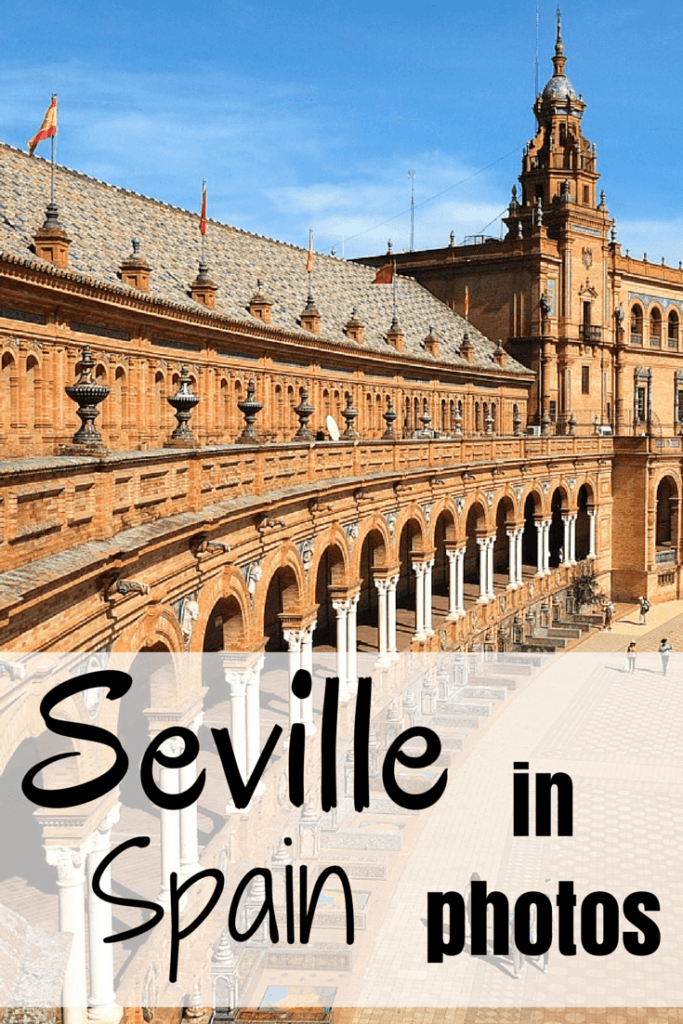 40 Comments on “Seville in Photos”