The Place Everyone Will Tell You to Visit in Spain

As soon as I started telling people I was going to Spain for the first time, I began getting an outpouring of suggestions about where I should go and what I should see.

And, inevitably, about every third suggestion centered around the Alhambra. 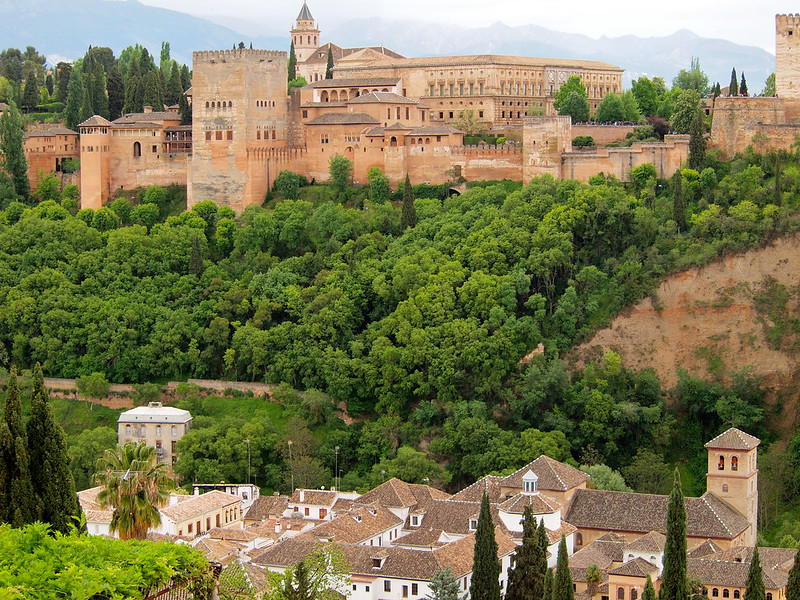 This Moorish palace complex in the Andalusian city of Granada is the top tourist destination in the whole of Spain, with thousands of people pouring through its halls and gardens each and every day.

To some, that might sound like a nightmare. But I knew (or perhaps it was conditioned into my brain by all my insistent friends and readers) that I would regret not going to the Alhambra if I was already going to be in the area.

So I booked a day trip to Granada from Seville.

From Seville, Granada is about a 3-hour drive. We left before the sun even came up in Seville, but luckily that meant we were in Granada and doing a walking tour of the Albaicin (historical Moorish neighborhood) before lunchtime. 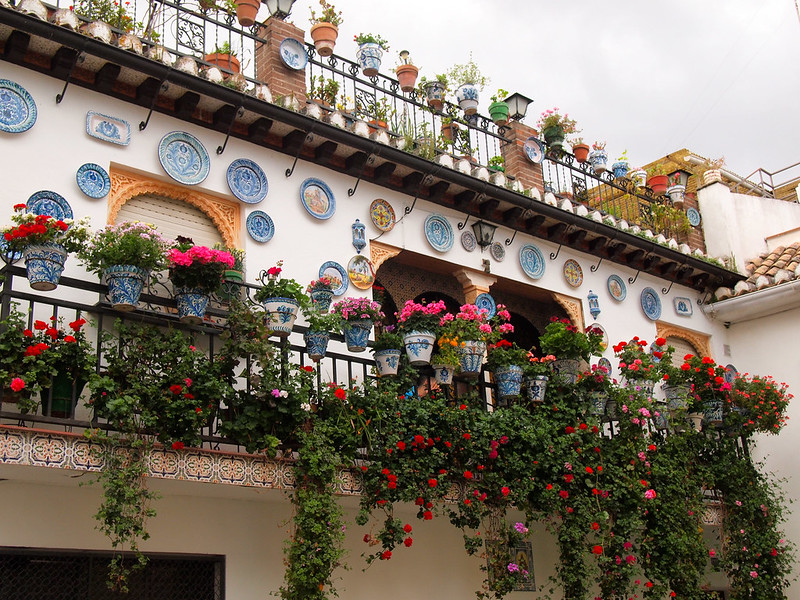 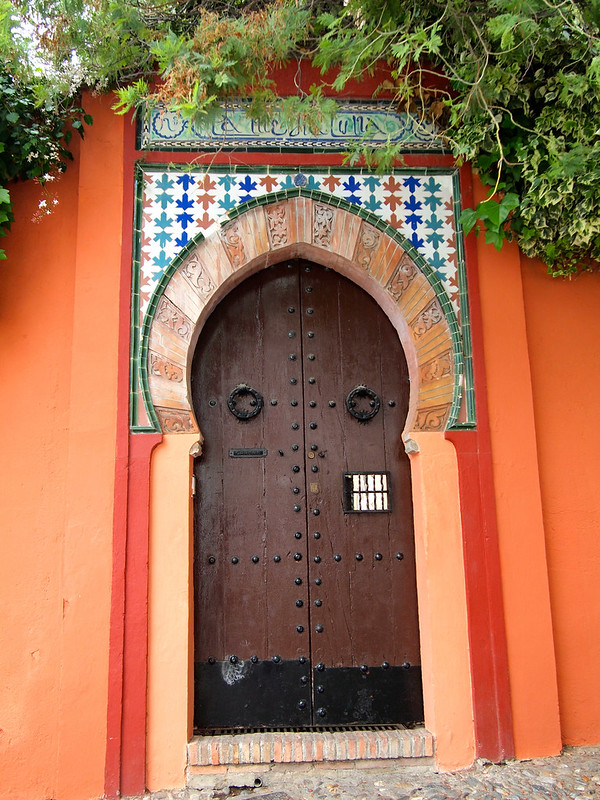 Unfortunately, though, I was also visiting southern Spain during some of the WORST weather. This part of the world (and especially this part of Spain) is known for its almost-perpetually sunny skies. Well, not when I was there. I got one day of sun in Seville, and a day of pouring rain in Granada.

But, it's a testament to how awesome the Alhambra is that I still ended up having a great time. 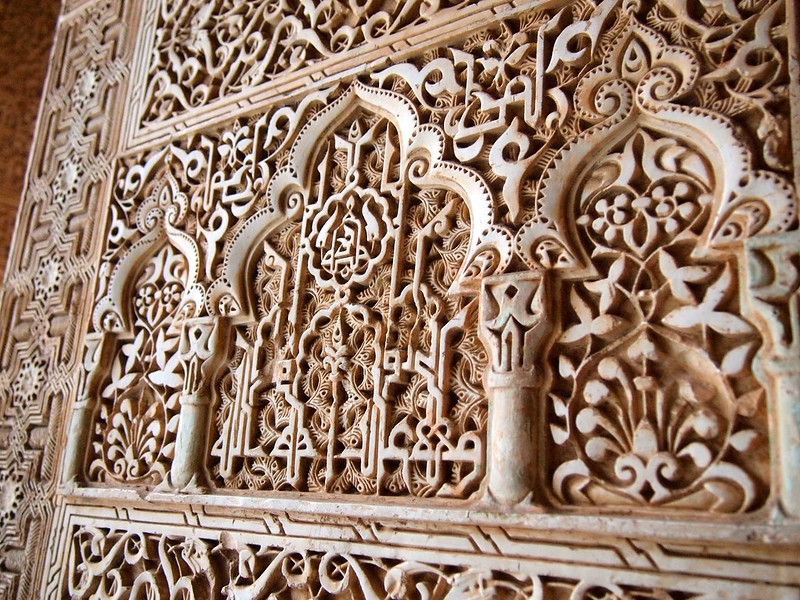 Before I get into telling you about my visit to the Alhambra, a little history is in order first.

The Alhambra as we know it today was built over the course of a few centuries on the site of a former fortress, beginning in the late 800s. But it didn't really become “famous” until the Moorish emir Mohammed ben Al-Ahmar (Mohammed I) made it his royal residence in the 1300s. Over the next 200-300 years, his successors would build the parts of the Alhambra that still stand today, adding on to the Alcazaba fortress that already existed.

This early Moorish influence is clearly seen in the Alhambra in its decorated archways, tiled walls, and intricate carvings. And it's very name comes from this period. The Arabic word “alhamra” means “the red one” or “red castle,” referring to the reddish color of the stones used to construct parts of the palaces. 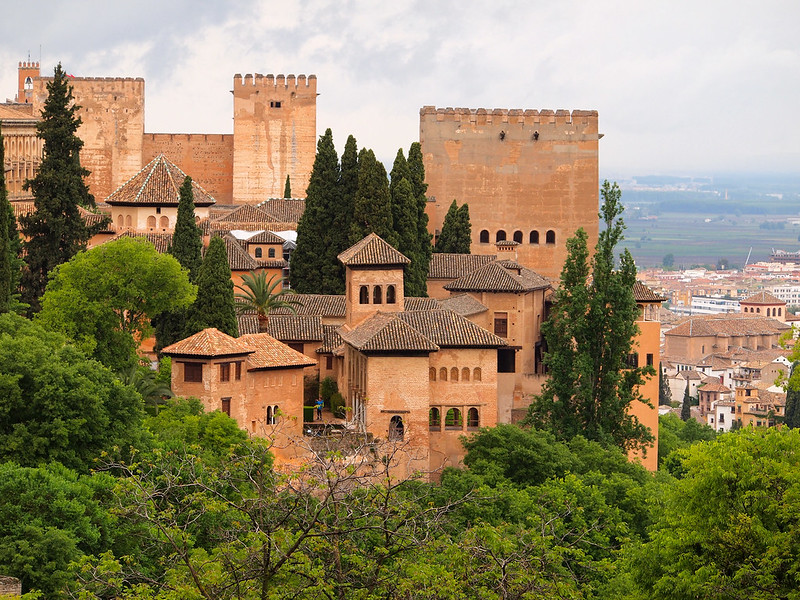 The Alhambra remained under Moorish control until the late 15th century. In 1492 (yes, the same year that Columbus sailed the ocean blue), Moorish Granada was conquered by the Catholics. Some parts of the palaces were used by the new rulers, but others were demolished and rebuilt (like the Palace of Charles V, which was added by the Holy Roman Emperor in 1527).

Eventually, though, the palaces were used less and less and fell into disrepair for hundreds of years. Squatters moved in. A lot of the original artwork was lost. Parts were destroyed in the 1800s during battles with the French and a strong earthquake.

It's possible that the entire complex could have been forgotten about altogether if it hadn't been “rediscovered” by European scholars in the 1820s. Since then, its been reclaimed and is still undergoing restoration. 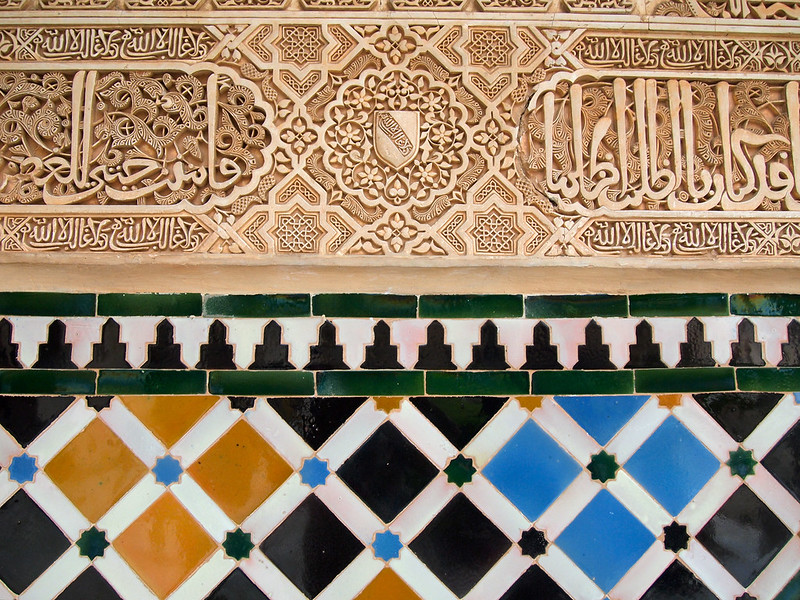 After a walking tour of the Albaicin and some time for lunch, we headed over to the Alhambra for our timed entry and guided tour.

Our first stop was the Generalife Gardens, which sit on a hill slightly above the main Alhambra palace complex. The gardens were first built in the 1200s, but have been rebuilt so many times over the centuries (and by different rulers) that nobody knows what the original gardens looked like.

Despite this, there's no arguing that they're beautiful today. 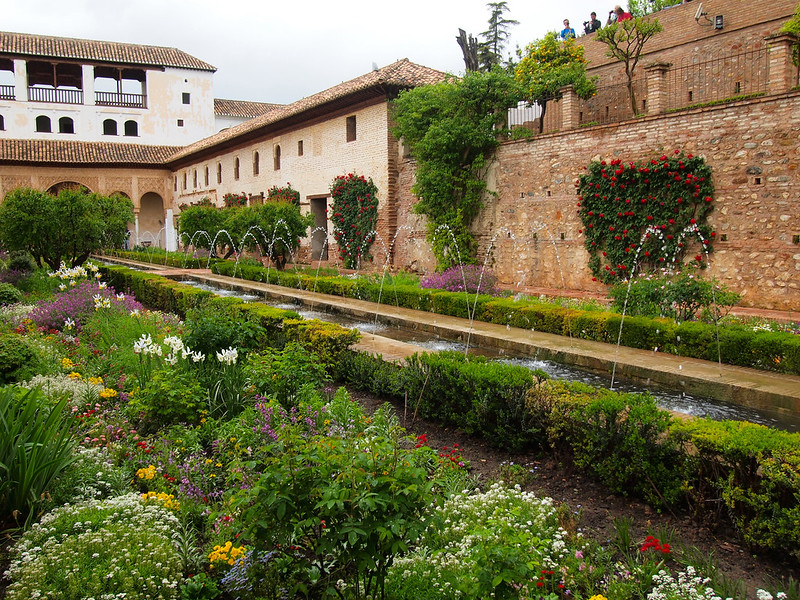 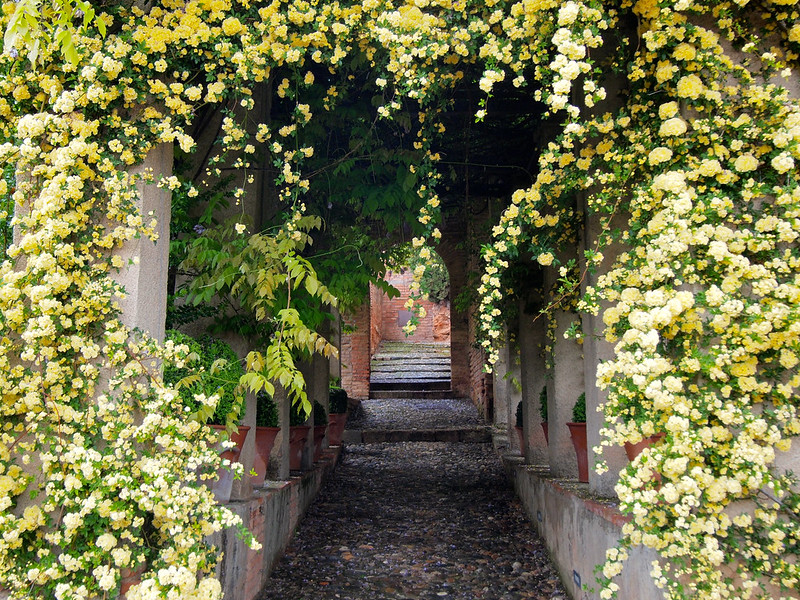 I visited in late April and everything was in bloom. Even though I was there on a rainy day, it didn't take anything away from the colorful gardens. 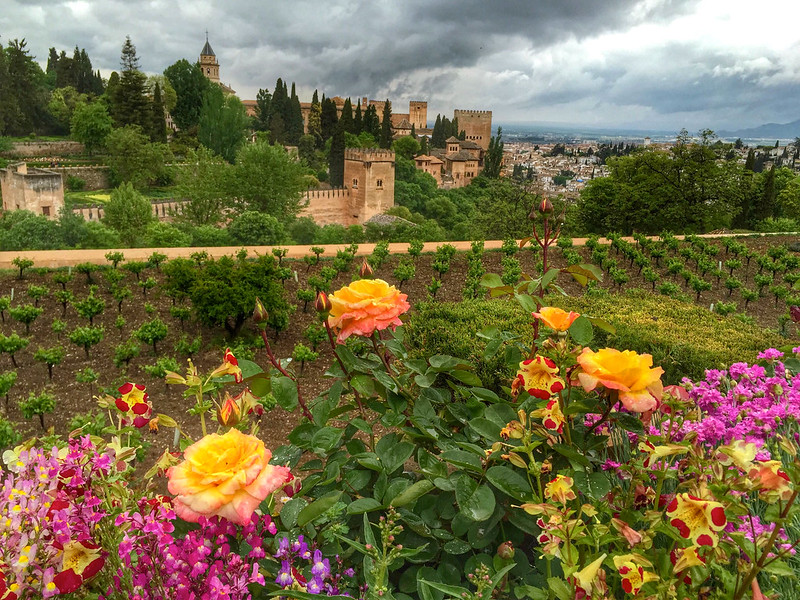 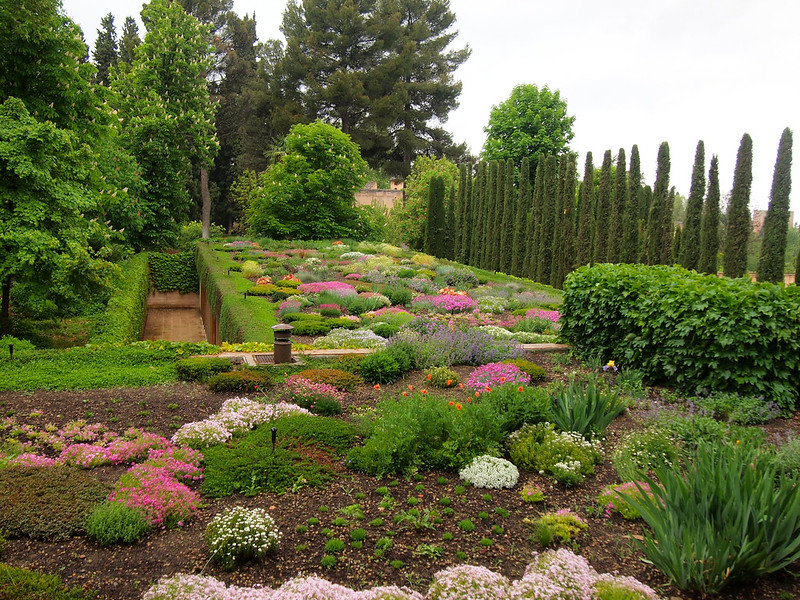 From the gardens, we walked down to the main part of the Alhambra, known as the Nasrid Palaces. These are the oldest palaces still standing, most dating back to the early Moorish rulers.

My mouth was agape through the first half of the tour at least, and I only heard about a third of what our very knowledgable guide was saying. The architecture and design inside these palaces is INSANE. It's no wonder why everything here is UNESCO-recognized. 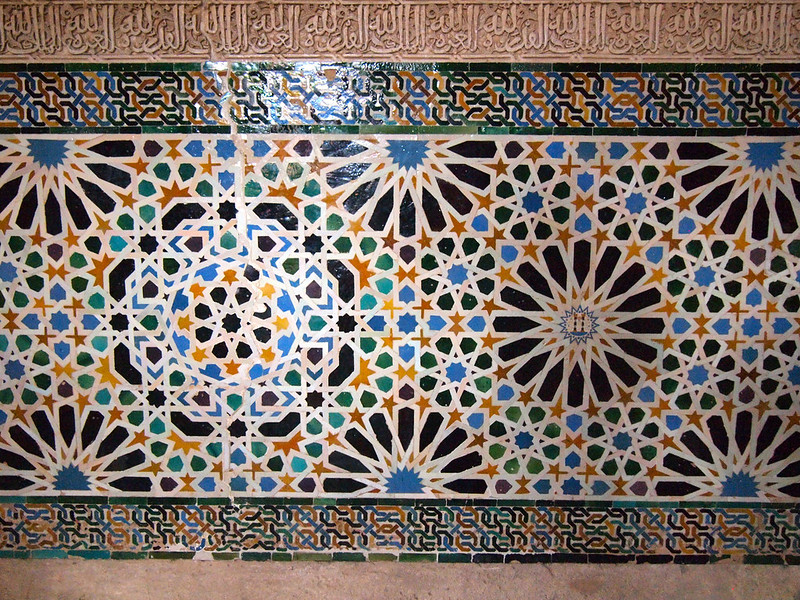 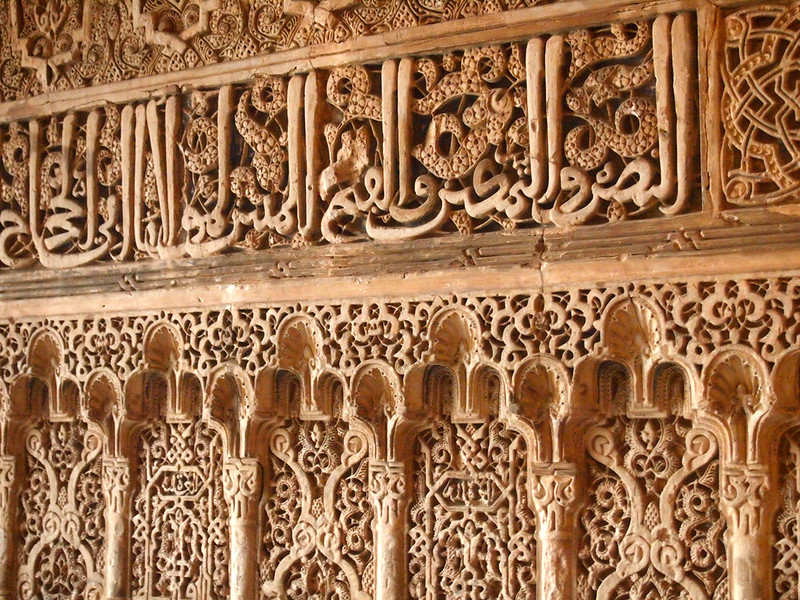 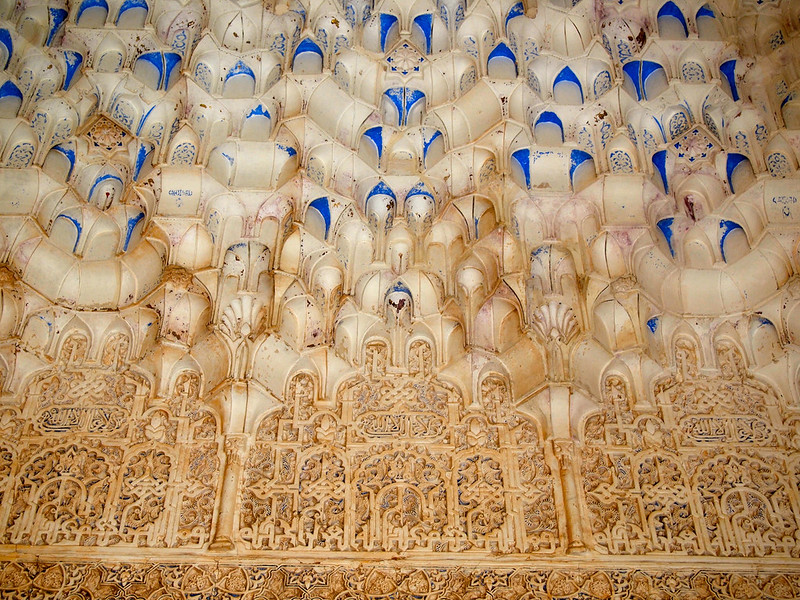 We worked our way through the rooms and hallways and courtyards of each palace. We took refuge from the rain in old bath houses with star-shaped cutouts in the roof to let light in. We briefly popped in to the Palace of Charles V, which sticks out from the beautiful Moorish buildings surrounding it like a sore thumb.

My favorite palace had to be the Palace of the Lions (Palacio de los Leones), which is where the royal family would have lived. The courtyard has a fountain at its center surrounded by (you guessed it) lions — 12 of them made of marble. 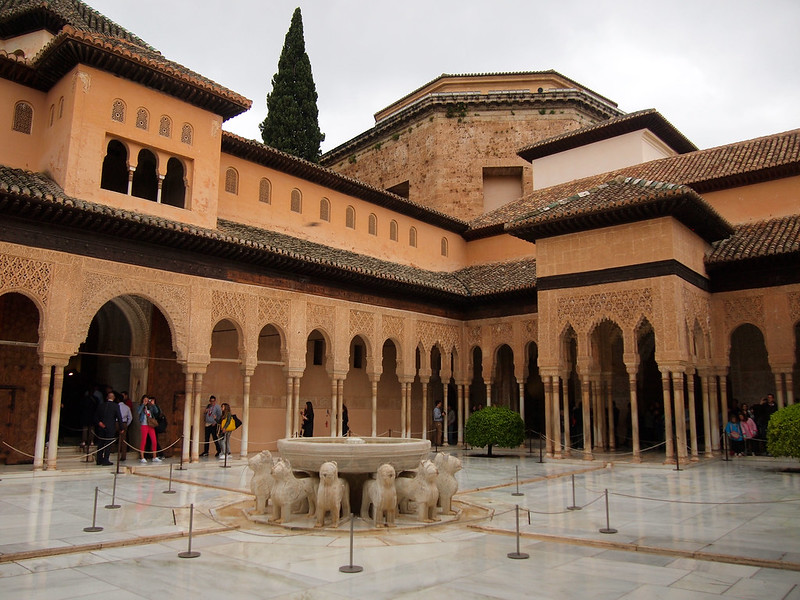 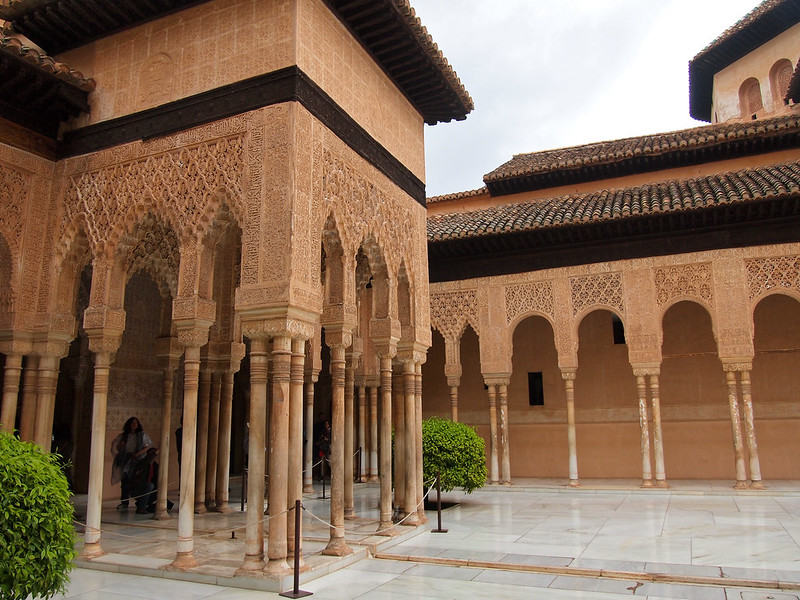 The rooms off of the courtyard are all intricately detailed. And this palace connects to the Hall of the Abencerrajes — my favorite part of the whole Alhambra thanks to the incredible ceiling. There's a fountain in the middle of the floor, and it's not uncommon to see people stepping into it because they're too busy looking up at the captivating honeycomb ceiling. 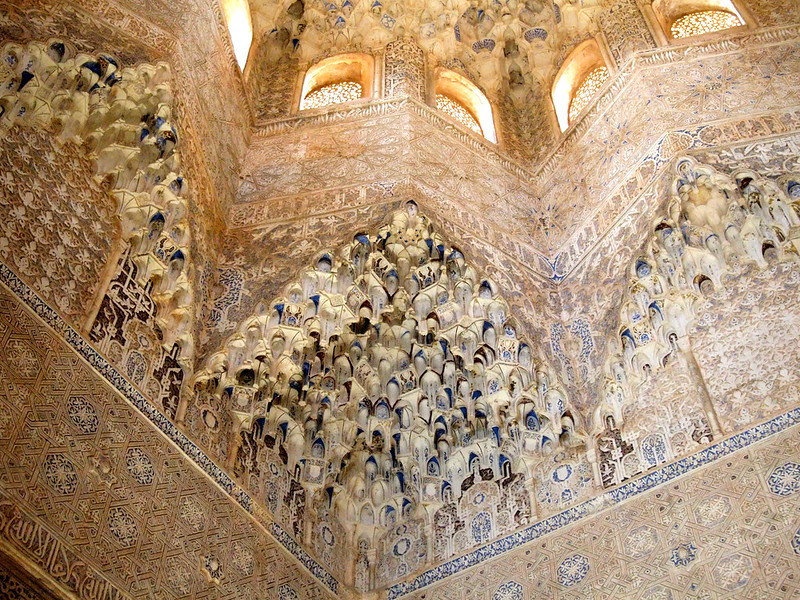 I also was awed by the Hall of the Ambassadors, both for its detail and its history. This was the grand reception room of the palace, and, in Moorish times, the throne of the sultan would have sat across from the entrance. In its Christian days, it was here that Christopher Columbus received support from Ferdinand and Isabella to set sail on his famous journey. Talk about historical significance! 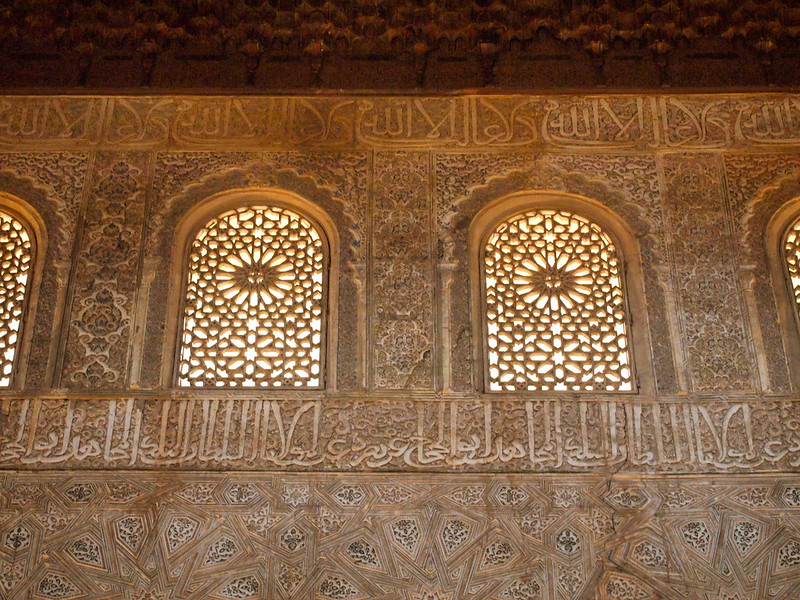 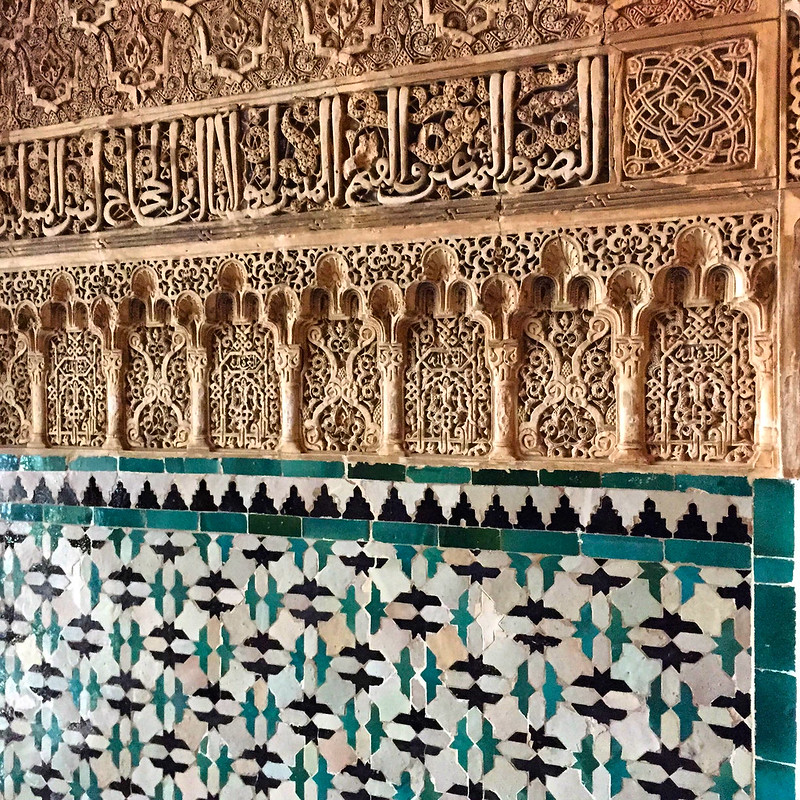 Is it worth going to the Alhambra?

After reading the above, you're now probably thinking, “Wait, why would you even ask this question?”

But I must address the downsides of visiting Spain's top tourist attraction.

First of all, this isn't a place where you can just show up and buy a ticket. There is high demand for visits to the palaces, and they put caps on how many people can visit each day. The Alhambra site actually recommends you book up to ONE MONTH in advance to ensure you get the ticket you want. 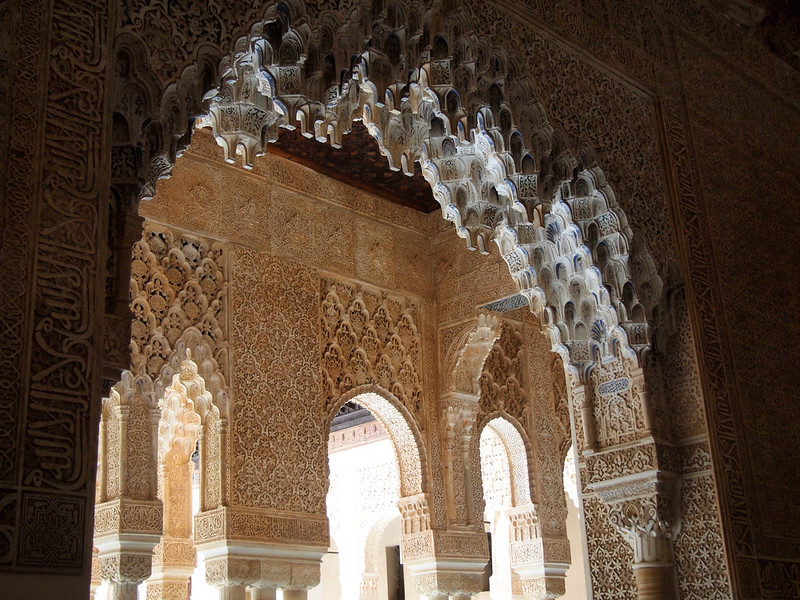 You can buy individual tickets (with no guide), or book a guided tour of the Alhambra and Generalife Gardens. (At 55 Euro per person, the guided tour isn't cheap, but I highly recommend visiting with a guide!) Your ticket will be timed, and if you miss your entry time to the palaces, they won't let you in.

And, as you can probably guess, the Alhambra can get CROWDED. At times you have to get creative if you want to take photos without people in them.

BUT, with all of that said, the Alhambra definitely IS worth visiting. 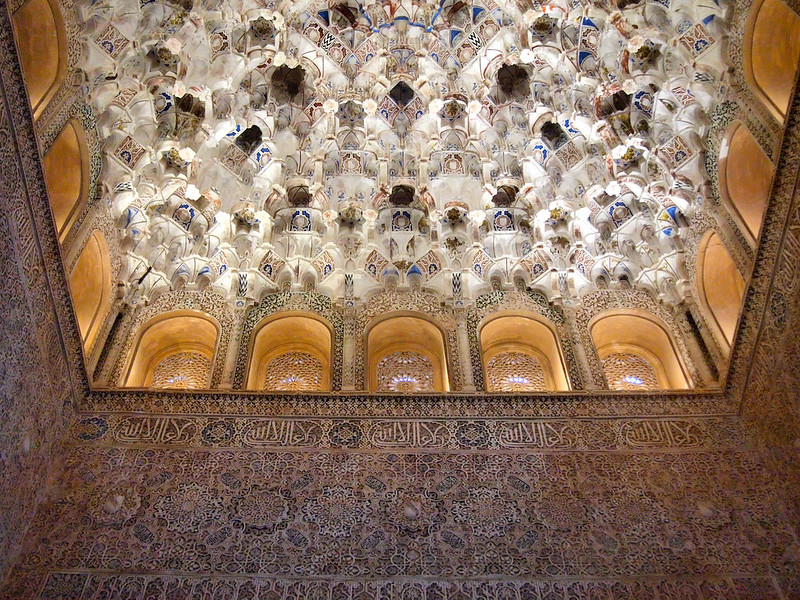 How to visit the Alhambra

Since I wasn't staying in Granada, I booked a tour from Seville with Viator. The tour included transport, skip-the-line entry to the Alhambra and Generalife Gardens with a guide, and an optional hour-long walking tour of the Albaicin (the old Moorish part of Granada).

The tour runs just under $150 per person and it's a LONG day of touring, but I thought it was really good value. Even though it was raining, I had a great day in Granada. 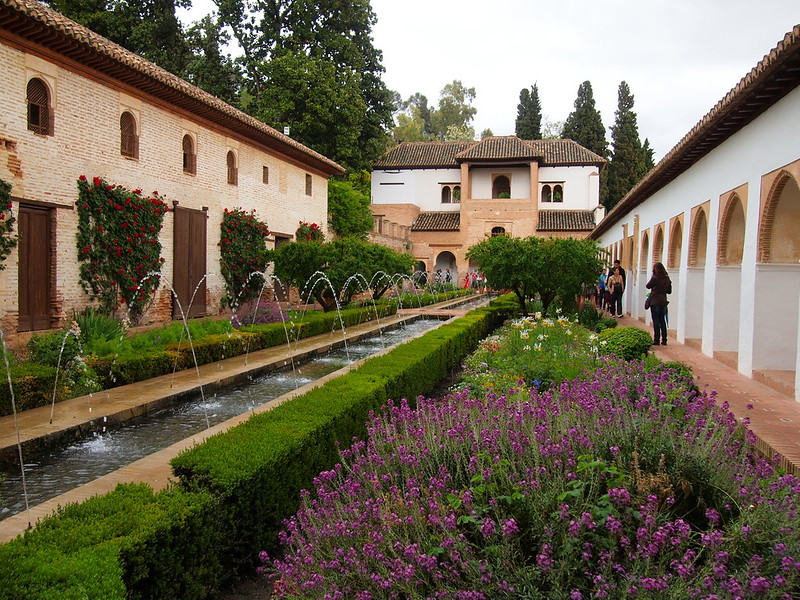 It's much easier if you're staying in Granada for a day or two (which I highly recommend since it's a beautiful city!). Here are some other tours to check out:

So what do you think? Would YOU brave the crowds to visit the Alhambra?