A Guide to the Neighborhoods of San Francisco

Home » United States » A Guide to the Neighborhoods of San Francisco

Before I visited for the first time, I only associated San Francisco with a handful of things: fog, the Golden Gate Bridge, “Full House,” and cable cars.

And, while those things are associated with the City by the Bay, my biggest “takeaway” from my visit was the knowledge that San Francisco is all about its neighborhoods.

From the Mission to Pacific Heights, Chinatown to Fisherman's Wharf, San Francisco really does have a neighborhood to suit all tastes. You could conceivably spend weeks here and still see something different every day.

I didn't have weeks, but I did have 6 days. And I made it my mission to visit at least one new neighborhood per day.

13 of the best neighborhoods in San Francisco

Here are some of my favorite neighborhoods in San Francisco, along with some unique things you can do/see in each one:

This is the first neighborhood most visitors to San Francisco encounter. It's where all the major hotels and souvenir shops are found; it's the location of Pier 39 and its famous sea lions; and it's one of the main turn-arounds for the city's cable cars.

And it's also incredibly crowded and touristy, especially on the weekends.

Fisherman's Wharf certainly wasn't my favorite neighborhood in San Francisco. In fact, on certain days, I swore it was my least favorite. But, it's so iconic that I knew I couldn't pass it up.

If you find yourself in this neighborhood, be sure to:

If you're visiting San Francisco with kids, this is one neighborhood you won't want to skip.

If you want to avoid the crowds and get slightly off the beaten path, be sure to visit Fisherman's Wharf early in the morning on a weekday.

Or, if you want an even more in-depth view of the area, consider hopping on a free walking tour of the neighborhood, offered by San Francisco City Guides. Not only are these tours fantastic for the budget, but they're given by passionate volunteers who really know their stuff.

Take a tour: Another fun tour option in this neighborhood is to explore by Segway!

Probably the second-most-popular neighborhood to visit in San Francisco after Fisherman's Wharf is Chinatown. This must-visit neighborhood sees more visitors per year than even the Golden Gate Bridge, and it's not difficult to understand why – it's that cool.

If you let your mind wander a bit while walking down a street in Chinatown, it's not difficult to convince yourself that you really are in China. In fact, San Francisco's Chinatown boasts the largest population of ethnic Chinese outside of China, so it's really not that much of a stretch.

Take a tour: This Chinatown culinary tour is a great way to learn about both the food and culture of this iconic San Francisco neighborhood.

Not far from Chinatown, San Francisco's Italian neighborhood comes to life in North Beach. Identified by red, white, and green flags on lamp posts and a growing number of gelato shops, San Francisco's “Little Italy” is great for an afternoon wander.

If you find yourself in this part of the city, be sure to:

North Beach also happens to be home to San Francisco's Red Light and major nightlife districts, and was at one point home to most of the city's beatniks (hence the Beat Museum and City Lights bookstore).

Take a tour: You can also take a delicious food tour of North Beach/Little Italy!

I didn't spend much time in San Francisco's Russian Hill neighborhood. Actually, I only went there for one thing: the twisty part of Lombard Street.

Just don't get run over while trying to take photos from/in the middle of the street.

Situated sort of between Fisherman's Wharf and North Beach, Telegraph Hill is worth a visit just for Coit Tower. With one of the best views of San Francisco and some amazing WPA murals, Coit Tower's admission fee is one you won't regret paying.

For a real challenge, make your way up to Coit Tower from the Embarcadero via the Filbert or Greenwich Steps.

Be warned, though, that your calf muscles will be burning after these!

I'd hazard a guess that less than 40% of visitors to San Francisco make it to the Mission District (and yes, I completely made that statistic up). It's not exactly the most warm and fuzzy neighborhood in the city (I would be wary of walking around down there alone after dark, for instance), but it might be my favorite neighborhood in San Francisco anyway.

With a distinct Latin flair and tons of amazing street art, The Mission is definitely worth a visit.

My suggestions for this neighborhood include:

There's also good shopping down Valencia, and plenty of good people-watching wherever you turn.

Take a tour: This food and mural tour of The Mission is the perfect mix of what makes this neighborhood unique.

If it's a colorful neighborhood you're looking for, look no further than the Castro, San Francisco's vibrant gay neighborhood.

Take an F-line street car here from downtown, and enjoy roaming the rainbow-flag-clad streets. If you're feeling up to it, you can catch a film at the Castro Theater, where people are known to heckle and throw things at the screen.

I only wandered through this neighborhood briefly, but I loved the vibe I felt there.

Take a tour: Learn about the Castro's LGBTQ+ history on a walking tour of this neighborhood.

Remember the “Summer of Love”? Well, it happened right here in the Haight, even though the exact year that “summer” fell in is debatable.

The neighborhood is known as Haight-Ashbury because of one famous intersection, and was instrumental in San Francisco's counterculture movement.

In the 60s and 70s, the Haight was the center of sex, drugs, and rock'n'roll in San Francisco. Today, not only can you find the previous houses of people like Jimi Hendrix, Joan Jet, and the Grateful Dead, but also the largest number of head shops I've ever seen in one area.

The neighborhood has largely retained its bohemian ambiance, and has plenty of funky shops to explore.

If it's expensive and/or Victorian homes you're in the mood to see, head to Pacific Heights. It has some of the best weather in San Francisco (yes, those micro-climates are VERY real!), as well as fantastic views of the Golden Gate Bridge, San Francisco Bay, and more.

If you want to check out some famous homes, stroll by Danielle Steel's mansion, or the house at 2640 Steiner Street that starred as the “Mrs. Doubtfire” house.

Take a tour: There are lots of cool tours to take in San Francisco, but a movie tour like this one is probably one of my favorite options!

And, while you're nearby, don't miss out on Alamo Square Park in the Western Addition neighborhood, with its famous row of Victorian houses known as the Painted Ladies. You've seen these on so many San Francisco postcards (not to mention in the opening sequence of “Full House”), and I promise that they're just as pretty in real life.

The highest point of this park offers up one of my favorite views of the city, along with a nice spot for an afternoon picnic.

This small neighborhood is located on the site of the 1915 Panama-Pacific International Exposition, which was held after the 1906 San Francisco earthquake in order to celebrate the rebirth of the city. The only surviving building from the expo is the impressive Palace of Fine Arts, which is now home to a hands-on science museum.

The Marina is bordered on one side by the former U.S. Army post Fort Mason, which is a great place to go on a Friday night for Off the Grid – a gathering of dozens of San Francisco's best food trucks.

Located inside the Golden Gate National Recreation Area next to the Marina District, the Presidio is especially great to visit on one of San Francisco's elusive nice days. It used to be a military base, but now is reserved for public use and run by the Presidio Trust.

If you're a sci-fi movie buff, you'll be interested to know that George Lucas' Industrial Light and Magic is located here, and the Presidio is also home to the Starfleet Academy in the Star Trek universe.

Last but not least, don't skip the Financial District of San Francisco. Yes, the neighborhood consists of a lot of concrete and skyscrapers, but it still has some surprises in store.

If you want to walk up the Embarcadero to Fisherman's Wharf, this is a great place to begin.

Even though I spent a week in San Francisco, there were still plenty of neighborhoods that I didn't get the chance to explore. Next time… next time.

READ NEXT: Exploring the Two Sides of Alcatraz

Have you been to San Francisco? If so, which is YOUR favorite neighborhood? 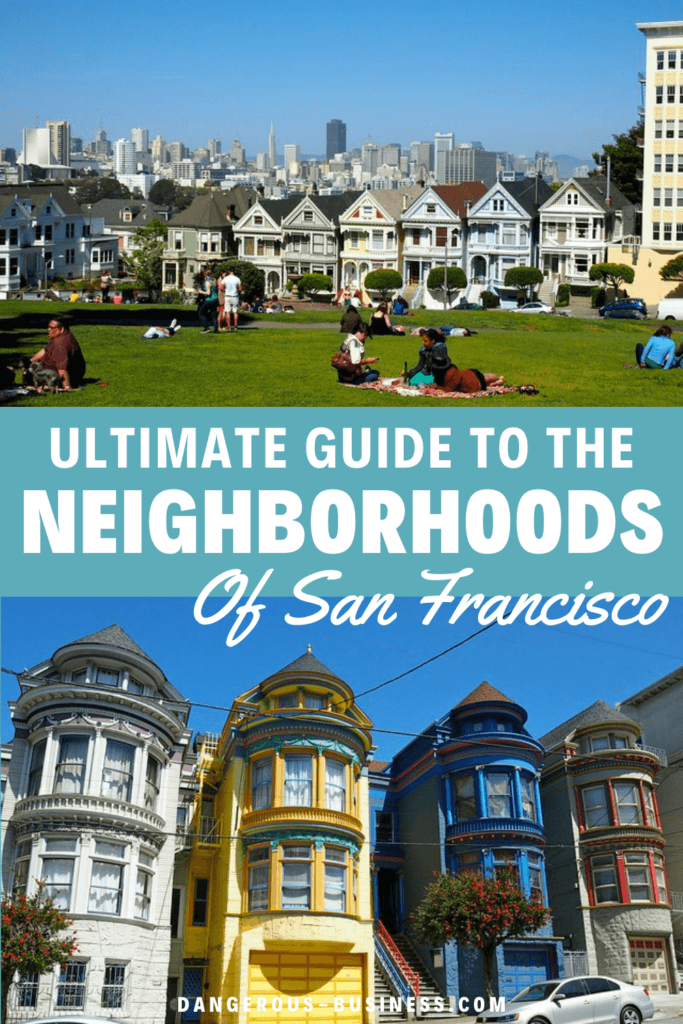 53 Comments on “A Guide to the Neighborhoods of San Francisco”