Put-in-Bay: Wait, This Place is in Ohio?

How much do you know about the Great Lakes?

But did you also know that the Great Lakes have islands? Because they do. Thousands of little ones, in fact, and a handful of larger ones that are actually inhabited. 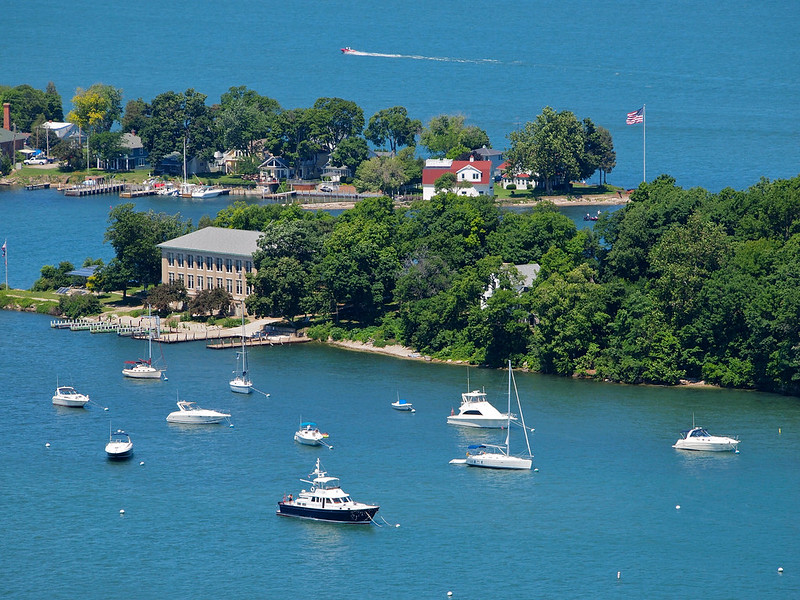 I was actually just recently riding a bike on the Toronto Islands in Lake Ontario, but I have to admit that I'd never really had much interest in the islands closer to home. Lake Erie – which borders my home state of Ohio to the north – has some fantastic islands just a few miles off the mainland. But I had only ever been to one.

So, before I waved goodbye to Ohio for an extended period, I decided I had better get at least one more Lake Erie Shores and Islands visit under my belt.

And what better place to finally visit than Put-in-Bay? 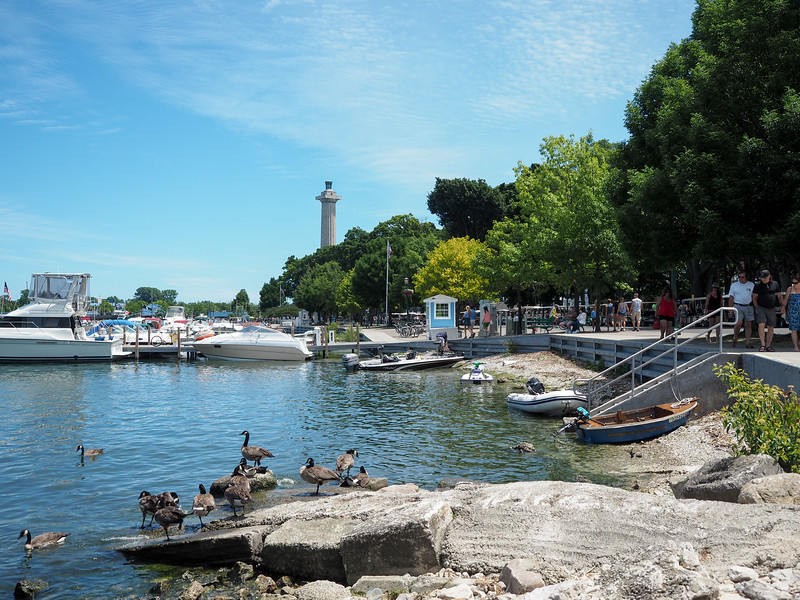 Put-in-Bay is a village on South Bass Island, with a permanent population of right around 150. During the summer months, however, the population swells by 10- or 20-fold as young twenty-somethings and retired couples alike flock to Put-in-Bay to party and relax in equal measure.

Now, usually I wouldn't be interested in a place known for its party-resort atmosphere; I'm not a fan of being around people who are so drunk that they can't even form coherent sentences.

But Put-in-Bay is so much more than just drunk college kids. 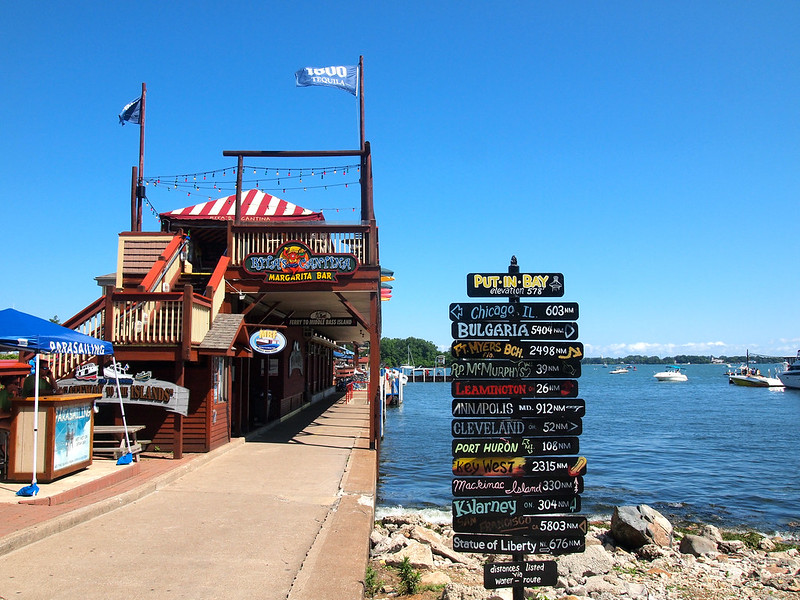 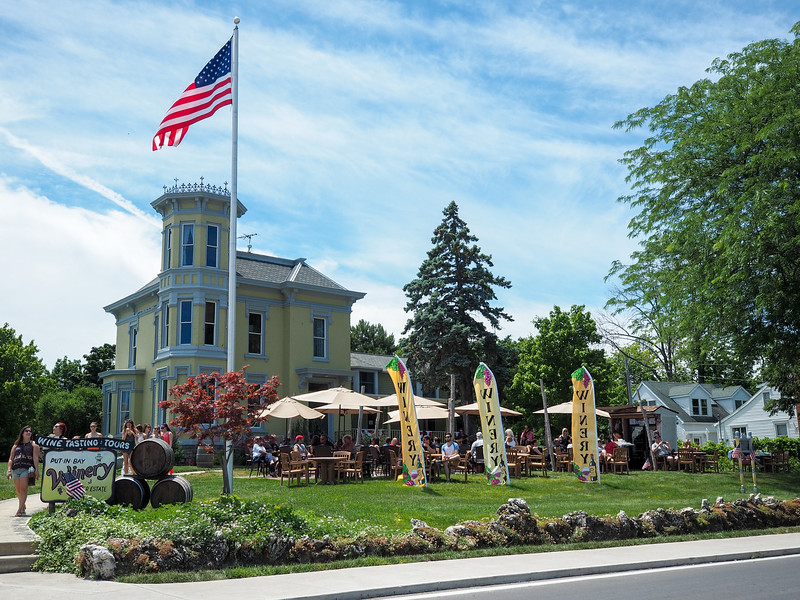 It's got yacht clubs and crepe restaurants. It's got more golf carts than cars. It's even got a national memorial to commemorate a naval battle that took place on Lake Erie in 1813 (yes, really). 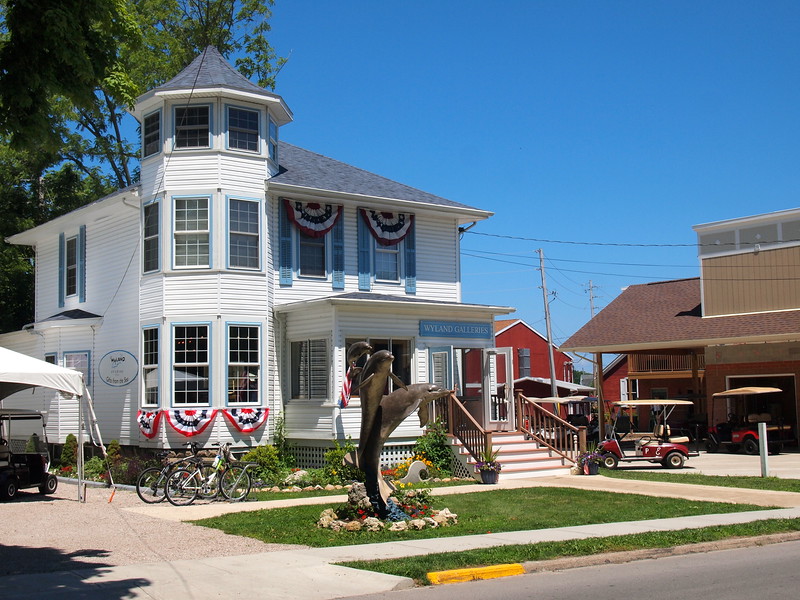 Despite being small, there's actually quite a bit to do on the island, especially in the summer months.

Things to do in Put-in-Bay

You can't miss this 352-foot tower – it's one of the first things you'll see as you approach South Bass Island from the mainland, and can be seen from various points around the island. Perry's Victory and International Peace Memorial commemorates the Battle of Lake Erie, one of the most significant naval battles to occur in the War of 1812. The monument is dedicated to those who fought in the battle, and also celebrates the long-lasting peace among Great Britain, Canada, and the U.S. (who were all involved in the War of 1812).

The monument is managed by the National Park Service, and the visitor center does a great job of explaining the Battle of Lake Erie.

But the real highlight is taking the elevator to the top of the tower, which gives fantastic views out over Put-in-Bay and Lake Erie. On a clear day, you can see Canada.

If you're looking for a lunch spot overlooking Lake Erie, head to The Boardwalk. You can find good seafood dishes here (Lake Erie is known for its perch and walleye!), as well as great views.

Yes, Put-in-Bay has wineries! Sip some delicious locally-bottled wines at either the Put-In-Bay Winery or Heineman's Winery. 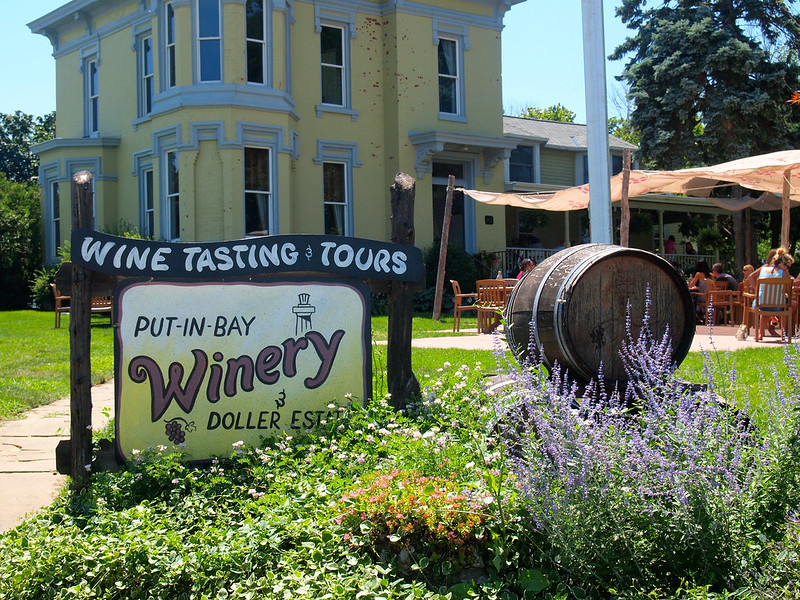 Perry's Cave is exactly what it sounds like – a cave! You can go on underground tours of this limestone cave, or enjoy some of the other things the family fun center has to offer, including mini golf, gem mining, a rock wall, and a butterfly house.

One of my favorite ways to explore the Lake Erie Islands is by bike! Several places in Put-in-Bay rent out bicycles by the hour/day, or you can bring your own over from the mainland. 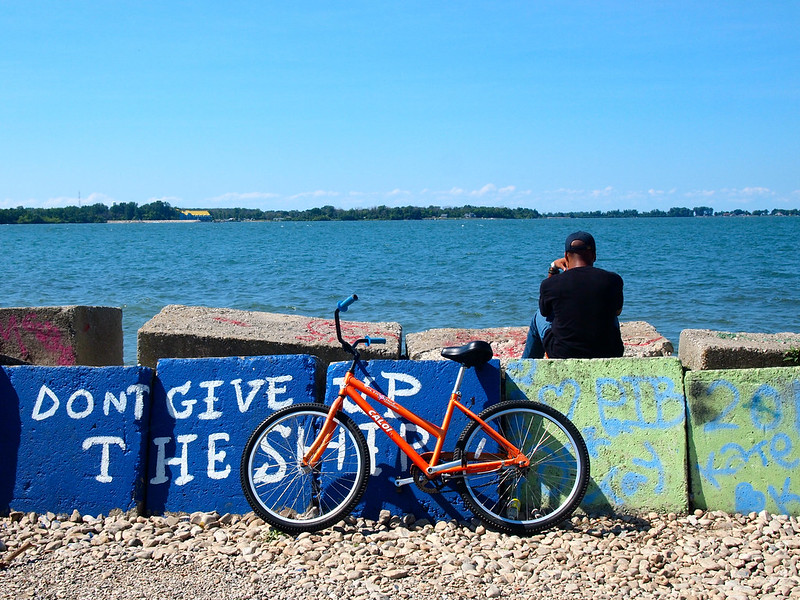 You can also ride an old carousel, go parasailing, rent a kayak, or just spend some time wandering around the town on foot.

A trip to Put-in-Bay doesn't have to be all about drinking and partying (though there are certainly plenty of places to do that, too). 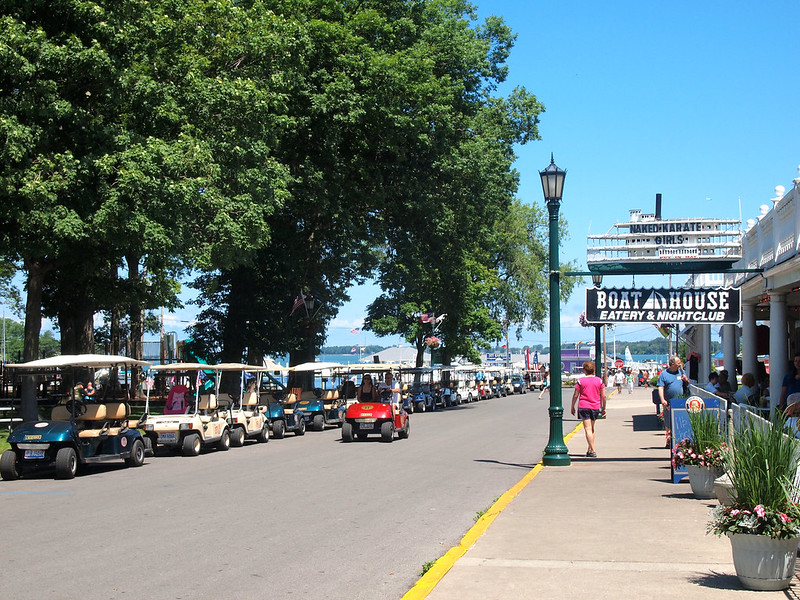 I'm almost ashamed that it took me this long to finally discover Put-in-Bay. It's a really great summer getaway destination, and it's no wonder lots of people flock here on the weekends. 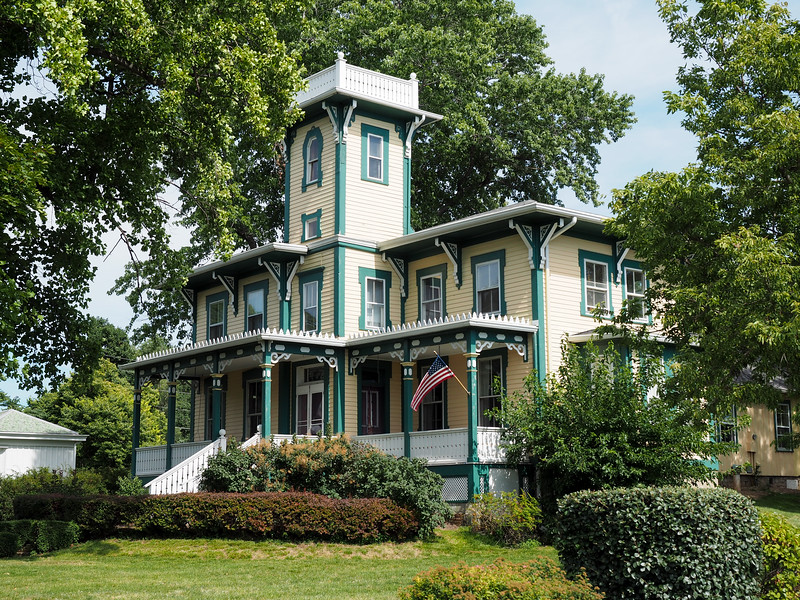 Getting there: You can catch a ferry from either Catawba Island, Port Clinton, or Sandusky. You definitely do NOT need a car on the island, though you can technically pay to bring yours over on the ferry. People-only ferry tickets start at $7 each way on Miller Boat Line from Catawba Island, and that ferry takes about 40 minutes.

Where to stay: There are quite a few accommodation options considering the size of the island. I stayed at the Islander Inn, which has a Caribbean theme and a distinct slant towards the party crowd. (This probably has to do with the fact that the resort has 5 pools and swim-up bars…)

Other, less party-focused options include:

Where to eat: Check out the Olde Forge Cafe and Creperie for breakfast, grab a fresh seafood lunch (perch and walleye are both local) on the Boardwalk, and have dinner at The Goat (a bit outside of the downtown area). 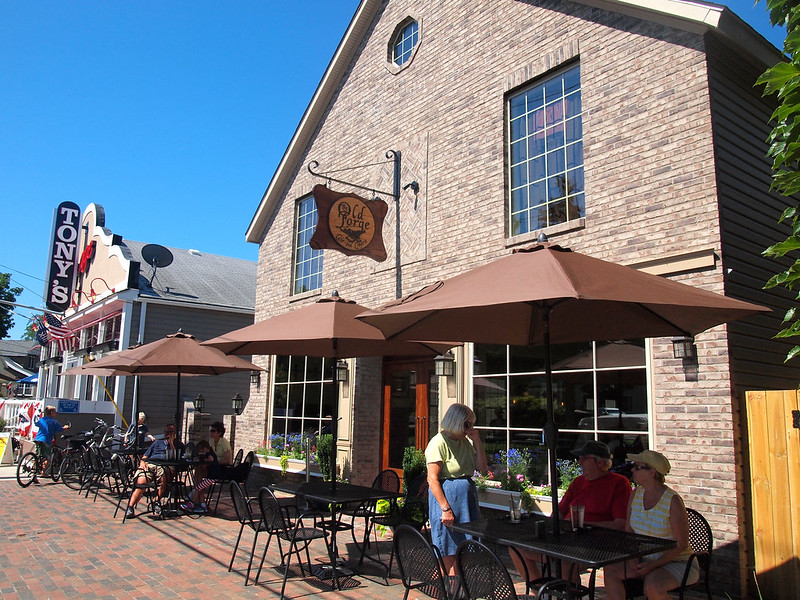 Where to drink: There are plenty of bars and clubs in Put-in-Bay. A lot of them can be fun, but also crowded. If you want to avoid the drunk crowds and go somewhere more “local,” check out Topsy Turvey's on the waterfront. Bring an extra dollar bill with you to staple to the wall.

Is Put-in-Bay a place that YOU would like to visit? 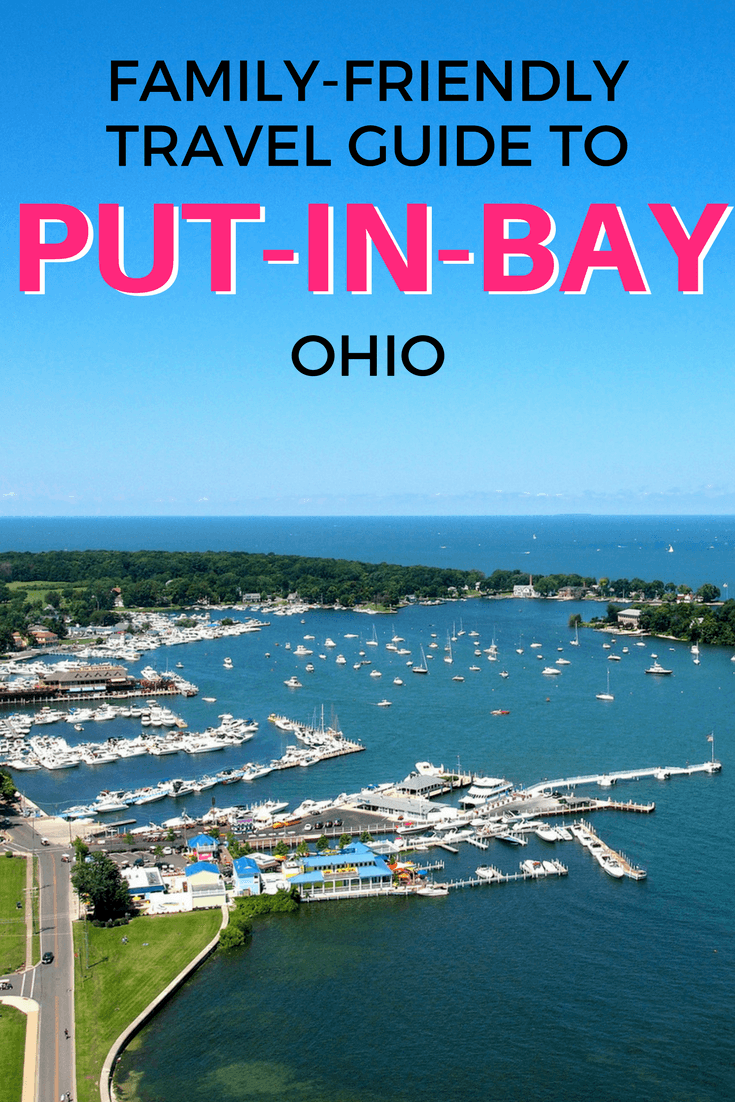