Fall had arrived literally overnight in Ohio, and I found myself shivering beneath my fleece and brand new bike shorts as as we boarded the ferry. It was chilly at the lake, and a cold wind promised some large waves for our ride over to Put-in-Bay and then Kelleys Island.

Sure enough, free car (and bike) washes for everyone! 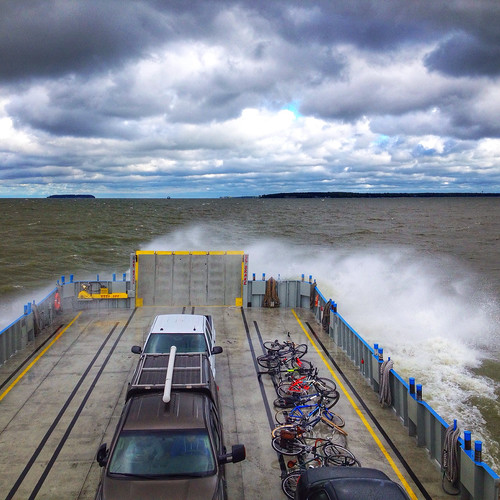 I've never been a huge cyclist. In fact, until earlier this year, all I had ever owned were hand-me-down bikes and a mountain bike purchased at Walmart sometime in my early teens.

But when you date someone who knows enough about bikes to have built his own, you learn to adapt — and to stop buying Walmart bikes.

So there I was, in my new padded bike shorts, helmet slung over my wrist, sitting on the Miller Ferry's upper deck, watching my Trek bike get bathed in Lake Erie water as we headed over to the islands for a weekend of bike riding. (Don't worry, though — no bikes were harmed in the making of this adventure.) 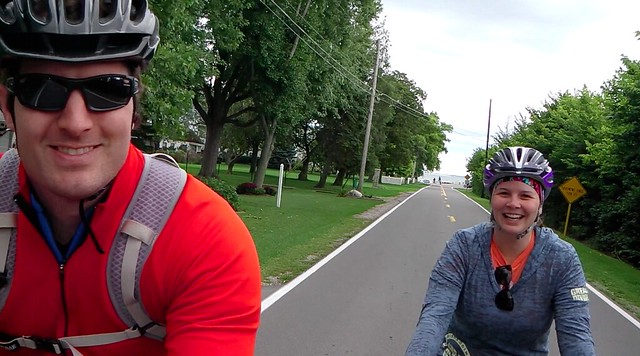 Much as I have only become a cyclist recently (and even then, only recreationally), I've also only become aware of all the Lake Erie Islands have to offer in the past year or so.

And, as it turns out, the islands are not only great for a weekend getaway, but are also great for cyclists.

Why are the islands perfect for an overnight biking trip, you ask? I'll give you three reasons:

1. The islands are very bike-friendly. There are some bike lanes, but even where there aren't any you don't have anything to worry about. Bikes and golf carts are the preferred method of transport here. Oh, and did I mention that the islands are small and pretty flat? Great for any level of rider.

2. It's cheaper to take a bike over on the ferry than a car. You can take your bike on any of the ferries that head out onto Lake Erie, and bringing a bike with you will only set you back $2-$3 extra per person.

3. No need to worry about parking. Since bikes are so plentiful on the islands, you can pretty much always find a bike rack. Sure beats trying to find a place to park! 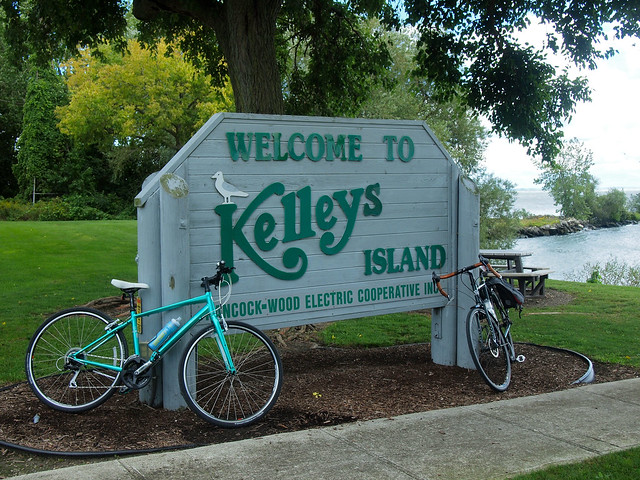 Elliot and I headed over on a Saturday morning, stayed overnight at Put-in-Bay, and left Sunday evening. We live only about 1.5 hours away from the main jumping off point for the islands, so this made for a perfect weekend getaway.

Here's a look at what we (and our bikes) got up to:

We took a morning Miller Ferry from Catawba Island to Put-in-Bay in order to check into our hotel, but then immediately hopped a 12:15 Jet Express ferry over to Kelleys Island. 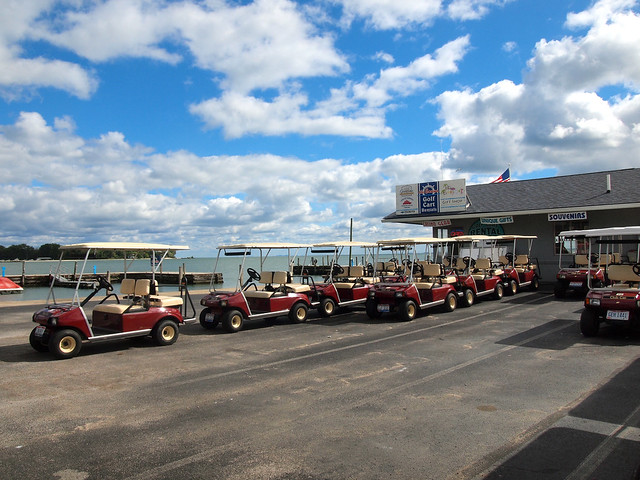 Lunch at The Pump

Food was first up on our agenda, so we headed straight to the Village Pump when we got off the ferry. Kelleys Island is super chill, so we just left our bikes sitting outside as we enjoyed perch sandwiches. Lucky for us, the weather cleared up as we ate, and the sun was shining by the time we hit the road that circles the island.

We rode along the coast, eyeing up all the private beaches and pretty patios that the island's part-time residents get to enjoy during the summer months. We rode roughly in the direction of Kelleys Island State Park in order to see the glacial grooves — deep gouges in the limestone that were made thousands of years ago by a giant slab of ice. These grooves are some of the most easily accessible ones in the world, so we made sure to stop and check them out. 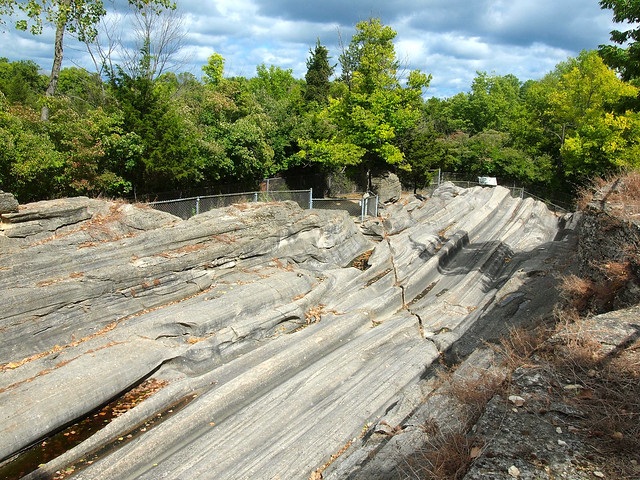 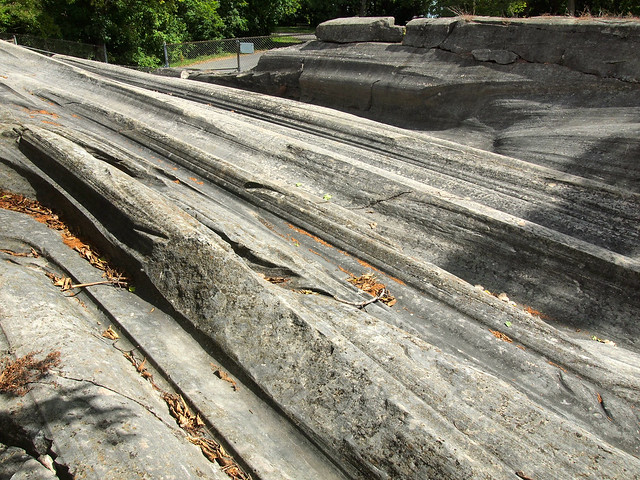 Hang at the Beach

From the grooves, it was on to the public beach in the state park. Even though many of the coastal beaches on the island are private, this one is open to everyone. It was definitely too cold to swim, but that didn't mean we couldn't enjoy the scenery. 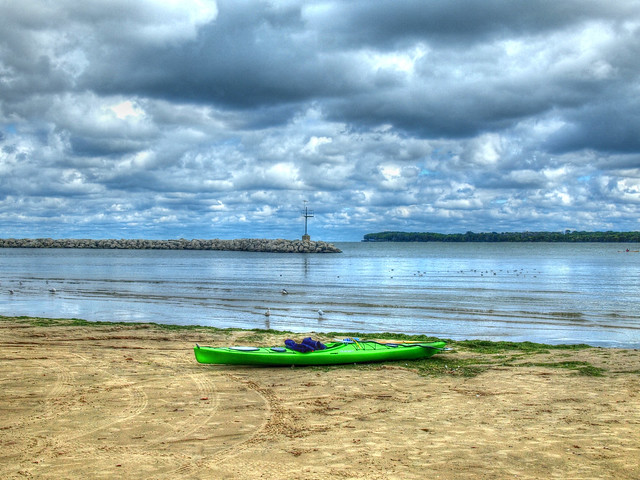 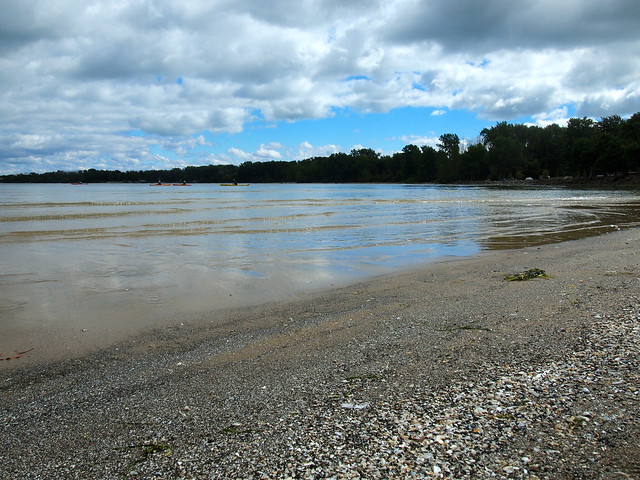 We finished our loop of the island by ogling some of the big houses overlooking the lake (the whole loop took us just over 2 hours since we stopped quite a few times). 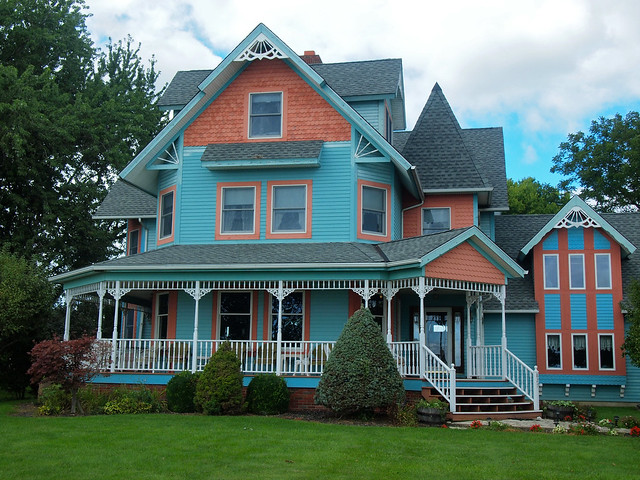 We took a late afternoon Jet Express back to South Bass Island, home to the Key West-inspired town of Put-in-Bay. It was here in 1813 that the Battle of Lake Erie took place — a significant battle in which Commodore Oliver Perry held off a British fleet of ships. The battle was re-enacted last year for the 200th anniversary, and is commemorated by the Perry's Victory and International Peace Memorial. Today, the town is popular with holiday makers who want to party on island time. 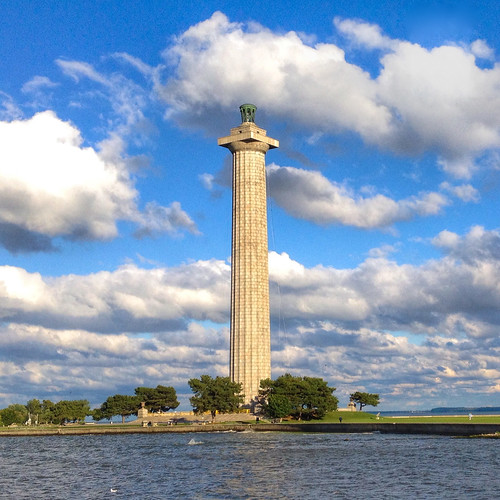 Since Elliot and I have done the touristy things in Put-in-Bay before (like going up to the top of the monument, visiting Perry's Cave, and frequenting some of the island's famous bars), we decided to stick to our theme for the weekend and focus on things we could do under our own steam.

We did almost a full circle of the island, which included a stop at North Point, where you can usually find graffiti-type paintings on big concrete blocks. (My favorite this time? Edgar Allen Bro.) 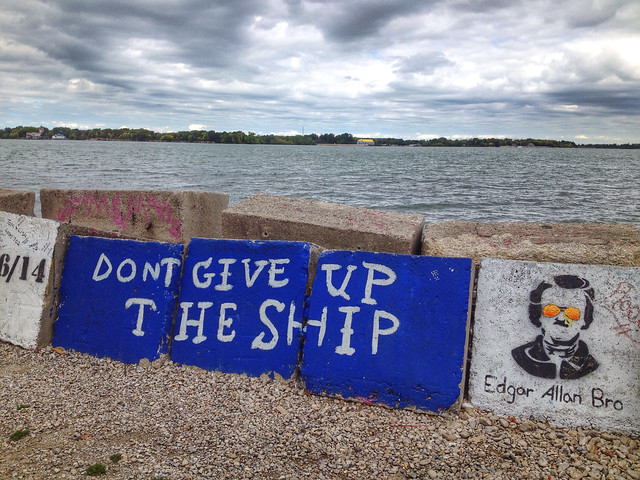 A great place for both people- and boat-watching, we took a break near the Boardwalk to pick out our favorite boat names. (The also serve a mean lobster chowder inside.) 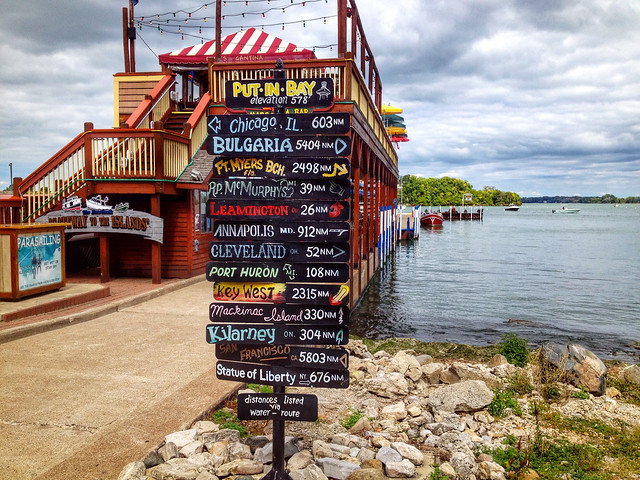 Speaking of food, we spent quite a bit of time replenishing our energy supplies with some delicious island dishes. In Put-in-Bay, we had perch tacos at The Goat, crepes at The Old Forge, and ridiculously large and delicious “Chad burgers” at The Keyes, which were topped with bacon AND pulled pork. 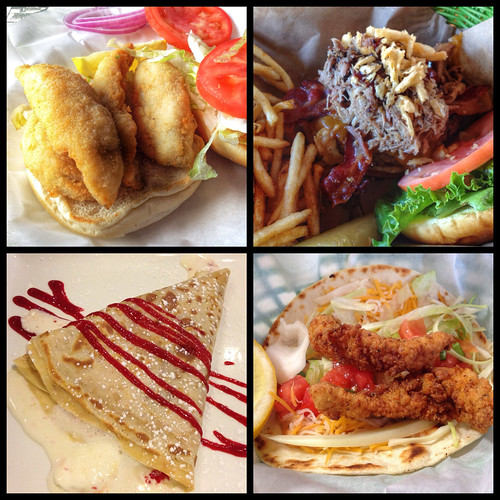 We could have easily spent another day on the islands (there's a ferry that goes over to Middle Bass Island, too, and we didn't even get around to renting kayaks or anything like that), but after two full days of cycling and sightseeing and eating, we were pretty beat. (Also, despite the new padded bike shorts, my butt was pretty sore.)

I have a feeling this might become an annual trip for us, though. It's the perfect active weekend getaway for two Ohioans like us!

Would you ever consider a trip like this, with bikes as your main form of transport?