When it comes to destinations that tend to top bucket lists, my guess is that the country of Turkey might not be one of them for most people. While you've probably heard of Istanbul, and maybe seen photos of hot air balloons over Cappadocia, have you ever heard of Konya or Beypazari? How about Kaş or Fethiye?

Turkey is a big and diverse country, with a lot of fascinating history and beautiful landscapes that the average traveler knows nothing about.

I don't pretend to be an expert on Turkey or traveling there. But I've loved my two trips, and hope I can inspire some others to want to visit and experience it for themselves, too.

In order to highlight the different things you can see and do in Turkey, I've rounded up my top 10 favorite travel moments from the country, followed by some more of my favorite Turkey photos.

RELATED: 8 Things That Surprised Me About Traveling in Turkey

1. Walking into the Hagia Sophia for the first time

When I used to read books where a character was “moved to tears” over a place or a moment, I used to scoff at said character. “That's not something that happens in real life,” I would insist.

But the first time I walked into the Hagia Sophia – the church-turned-mosque-turned-museum in Istanbul that was built in the year 537 – it happened to me. As I walked into the cavernous interior of Hagia Sophia filled with its hanging chandeliers and millennia of history, I gaped and immediately felt tears welling in my eyes.

I usually cite this moment as an example of why I travel. Genuine moments of awe like this stay with you forever.

RELATED: In Photos: Inside the Magnificent Hagia Sophia in Istanbul

2. Spending a day on a boat on the Turquoise Coast

On my more recent tour around Turkey, my small group spent an entire day sailing around the Mediterranean on a local family's boat. We were on Turkey's “Turquoise Coast,” a Riviera-esque part of Turkey that's much less crowded than more well-known Mediterranean destinations in Europe.

Our day was leisurely, punctuated by stops to swim in the clear blue water, climbs to castle ruins, and naps on the shady top deck. We had a BBQ lunch on the water, and bought ice cream off a man who pulled up, ice cream truck-style, in a small speed boat.

It was pretty much a perfect day, and made me want to return to this part of Turkey in the future.

3. Hiking in the Red and Rose Valley in Cappadocia

I still haven't been hot air ballooning in Cappadocia (it's weather dependent, and unfortunately it was too windy the whole time I was there!), but I did have the opportunity to go hiking in two of the area's famous valleys.

I hiked the Red Valley and Rose Valley with my dad. And even though we walked a fairly gentle trail, we took our hike slower than some of the other people in our group.

But this pace was actually perfect. We were able to note all the old caves and pigeon houses in the cliffs above our heads. We were able to soak up the perfect temperature and sunshine. And we were able to better appreciate the break for fresh-squeezed pomegranate juice before we reached the end of the trail.

Hopefully I'll make it back to Cappadocia sometime for the hot air ballooning, too. But for now, the memories I have from there are still really good ones.

Curious about the tour I took in Turkey? My dad and I went on the Turkey Encompassed tour with Intrepid Travel in October 2019; we both loved it!

4. Splashing through travertine pools at Pamukkale

The white travertine pools at Pamukkale are one of the most popular tourist sites in Turkey. This means that they can be really crowded depending when you visit – but I found that it was actually pretty easy to get away from the crowds and still really enjoy this natural site.

Because yes, most of this is natural! The white terraces here were formed by mineral-rich thermal waters cascading down a hill and leaving deposits behind over hundreds of years. Pamukkale was a Roman spa town long ago, and has lots of history (and ruins!) to go along with its white pools.

But of course it was wandering through the pools right before sunset that was my favorite part of my visit here. Touristy as it was, I still really loved Pamukkale.

(I should note, however, that the pools are usually not ALL filled with water; only one or two sections are usually filled at once, as you can see in the photos above. So if you're expecting to see hundreds of white pools filled with baby-blue water, you'll be disappointed.)

5. Being one of the first people into Ephesus

Visiting the well-preserved ruins of the ancient Greek city of Ephesus was always on my Turkey bucket list. But knowing that it's a super touristy site in the country, I always kind of resigned myself to the fact that I'd be sharing my visit with potentially thousands of other people.

Imagine my delight, then, when my tour group ended up having the entire site to ourselves for about half an hour. This was planned, of course; we woke up extra early, and arrived at Ephesus before it even opened. We were the first ones through the gates, and made a beeline to the Library of Celsus, where we watched the shadows fade as the sun rose to illuminate the building.

The large tour groups soon followed, but I didn't even care. Having the ancient city to ourselves even for just that short while made the whole day feel special.

(And, to be honest, I would have loved it even with the crowds; the ruins are incredible!)

A cultural highlight from my time in Turkey was going to see a Sufi Whirling Dervish ceremony in Cappadocia. I call it a ceremony and not a performance, because these men aren’t putting on a show.

The Whirling Dervishes are doing a religious dance connected to the Islamic sect of Sufism, which was founded by Mevlana Rumi in the 13th century.

The spinning dance, known as sema, is artistic yes, but at its heart it’s meditative. The ceremony was mesmerizing to watch and gave me goosebumps. My dad said it was almost a spiritual experience.

Later in our trip, we visited the city of Konya, where Rumi is buried. We learned a bit more about Sufism and it’s teachings, which include messages of universal love. It’s a fascinating religion/philosophy, and I’m so glad I got to see a whirling dervish ceremony in person.

Most people associate Turkey with the Ottoman Empire. But the Ottomans are a fairly recent empire, really only coming into power in the 1400s. Before the Ottomans came along, Turkey had a rich history that included civilizations as diverse as Assyrian, Hittite, Persian, Greek, and Roman.

My favorite Roman site that I've visited in Turkey has to be Aspendos Theatre. Found in the countryside in the Antalya province of Turkey, this massive Roman theater can seat 12,000, and is still largely in-tact despite the fact that it was built around 180 AD.

This theater is said to be one of the best-preserved ancient theaters in the world, and getting to walk around it (especially with so few other tourists) was pretty incredible for this history nerd!

8. Watching the sun set from atop an ancient theater

Speaking of ancient theaters, another favorite memory of mine was walking out to the Antiphellos Theatre in the small Mediterranean town of Kaş. This Greek theater is small and not super remarkable after visiting a place like Aspendos, but it was less about the structure itself for me and more about the overall experience – and the views!

We climbed to the top of the theater, and watched the sun set into the sea while chatting and sipping local drinks. A sunset doesn't get much better than this.

9. Cruising the Bosphorus at sunset

Speaking of sunsets, a must-do in Istanbul is to take a cruise on the Bosphorus, the natural waterway that separates the continents of Europe and Asia.

While these cruises run throughout the day, I recommend booking one around sunset time. Depending on the weather, the Golden Horn could really turn to gold, or the sky could explode into different shades of orange, pink, and purple.

Cruising around sunset means you'll get to see the bridges, mosques, and buildings illuminate around dusk, too.

I wanted to include a quick and simple memory here, too: sharing a meal. Food is such a huge part of Turkish culture – in fact, as my dad and I traveled around Turkey on a small-group tour, he kept insisting that we must have booked onto a food tour because of all the eating we were doing.

One of my favorite food stops was at a nondescript roadside restaurant not far from the Aspendos Theatre. Our group relaxed on cushions around low tables as a local family prepared handmade gözleme (a stuffed flatbread-like pastry dish) on the spot.

Afterwards, some of us dozed in the shade, while some others took a quick tour through the family's backyard garden, returning with armfuls of giant pomegranate fruits plucked fresh off a tree.

Hospitality is just as big a part of Turkish culture as food, and the two often go hand-in-hand.

Want to see more from Turkey? Here are more of my favorite photos from different parts of the country that didn't fit anywhere else in this post:

Who wants to plan a trip to Turkey now? Which photo is your favorite? 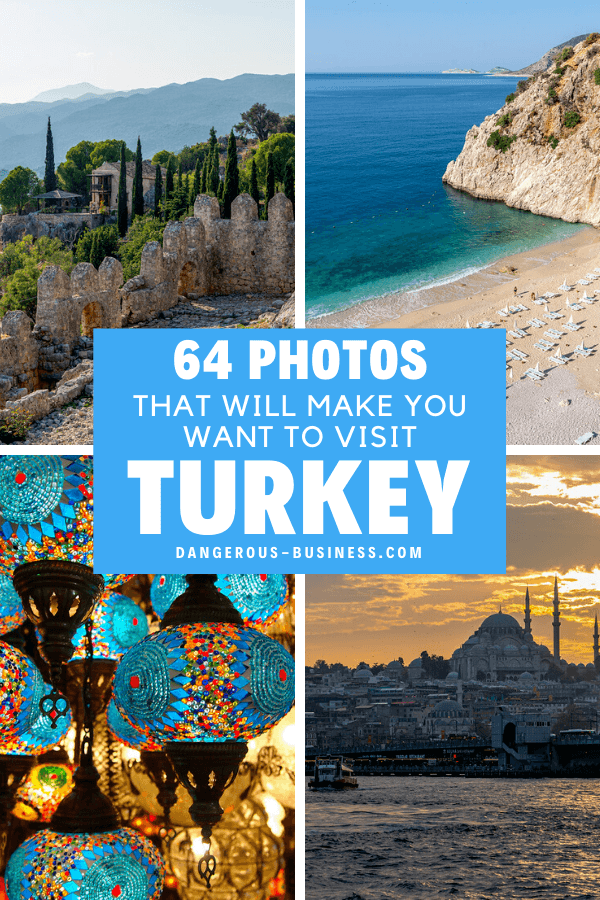