Why You Need to Know About Turkey’s Turquoise Coast

We arrived in the tiny town of Kaş in the late afternoon, climbing a narrow street in our van and stopping at a small hotel perched high above the sea. We checked into our white-washed rooms with tiny balconies, agreeing to meet up again in just half an hour in order to go somewhere special to watch the sunset.

And 30 minutes later, we were walking downhill through the sleepy town, past houses and boutique hotels dripping with bougainvillea and Turkish flags – the latter in celebration of the upcoming Republic Day.

If you're wondering where the heck Kaş (pronounced Kash with a short “a”) is and what I was doing there, it's a tiny town on Turkey's Mediterranean coast. I visited a handful of towns in this part of Turkey (including larger coastal cities like Antalya and Fethiye) on my 2-week tour with Intrepid Travel, but it was Kaş that really stuck out as being special.

Kaş really is just a town, with a population of just over 7,000. It's a touristy town on what's known as the “Turquoise Coast” of Turkey, or the Turkish Riviera. But unlike other Mediterranean resort towns you may have heard of, Kaş is still relatively under-the-radar.

I visited Kaş at the end of the tourist season in October. The weather was still warm, though, and the breeze coming off the Mediterranean was welcome as we trekked past seafood restaurants and the small town square on our way to a special sunset spot.

The spot ended up being the Antiphellos Theatre, an ancient Greek theater that overlooks the sea. The theater isn't as grand as some of the Roman ruins you can find in Turkey, but it's been restored to make it easy to visit, and can still hold a couple thousand people comfortably.

On this particular October night, there were just a handful of sunset seekers.

We broke out the sundowner drinks we'd packed, and sipped them atop the theater as the sun slowly slipped behind the horizon into the Mediterranean Sea. This wasn't the first Mediterranean sunset I'd seen, but it was certainly a memorable one for how relaxing it was.

If you do a Google search for Kaş, Wikipedia will be quick to tell you that it's “a small fishing, diving, yachting and tourist town.” That description doesn't really fully encompass what this little slice of Mediterranean paradise is really like, though.

I didn't fully appreciate it myself until our second day in Kaş, when our whole group hopped back in the van and headed a little ways south to a small harbor, where we climbed aboard a local family's boat for a day of exploring the Turquoise Coast.

Comparable to the “rivieras” you'll find in other parts of Western Europe (think: the French Riviera), the Turquoise Coast is also known as the Turkish Riviera. It stretches along the Mediterranean in southwest Turkey, and is known for its nice beaches, mountain scenery, and warm climate.

But, unlike in France and other popular Mediterranean coastal areas, the Turkish Riviera is much less well-known.

As we sailed along the coast towards the sunken city of Kekova and Simena Castle, we passed only a few other tourist boats.

Yes, we were visiting outside of high tourist season, but there were still plenty of moments throughout the day when it seemed like we had this little corner of the world all to ourselves.

We spent the day sunning on the top deck of the boat, and jumping into the clear turquoise waters of the Mediterranean. Even in October, the Mediterranean was plenty warm enough for swimming.

When lunchtime rolled around, our hosts whipped up a BBQ lunch onboard, and a man in a speed boat pulled up to sell us ice cream.

I'm not sure if it was a byproduct of all the sun and swimming, or if it was just a testament to the culinary prowess of our hosts, but the meal was one of the best I had in Turkey.

After lunch, we drifted over ancient ruins of sunken cities, and pulled up in the village of Kaleköy to climb to the ruins of Simena Castle.

The climb to the castle ruins wasn't exactly graceful in our sandals and beach gear, but it was 100% worth the effort.

From atop the fortress walls, the Mediterranean stretched out in all directions in hues of deepest blue. Once again, I found myself so surprised that I hadn't heard much about this part of the Mediterranean before. It's pretty incredible.

On the way down from the castle, we stopped for gelato in a little cafe that was occupied by more cats than tourists, and then headed back onto the boat for one more swimming stop before heading back to the harbor and ultimately back to Kaş.

I traveled to Turkey with my dad, and we both agreed that this was one of our favorite days of the trip.

Want to take a boat trip like the one I took?

Reasons to visit the Turkish Riviera

If the photos above haven't convinced you, here are a few other reasons why you should consider planning a visit to the Turkish Riviera:

How to visit the Turkish Riviera/Turquoise Coast

I visited the Turkish Riviera as part of a larger tour around Turkey, but you can absolutely visit it independently, too.

The Turquoise Coast/Turkish Riviera spans almost 600 miles of coastline in the southwest of Turkey. It extends from the province of Antalya in the south to the Cesme peninsula in the north.

Popular cities/towns in this region include:

(This is just a short list of them – see even more here.)

How to get to the Turquoise Coast

There are many options when it comes to getting around Turkey.

Two airports exist along the Turquoise Coast, including a larger one in Antalya, and a smaller one in Dalaman. You can also reach many of the towns on the coast by bus (Turkey has a really nice luxury inter-city bus system), and travel between them using dolmuş, or minibuses.

Renting a car in Turkey is also always an option if you want to have a bit more freedom; roads in this part of Turkey are generally well-maintained. (Search for rental car options here.)

Multi-day sailing trips are also popular in this part of Turkey. The route from Bodrum to Kaş is popular and known as the “Blue Voyage.” If you're interested in sailing the Turkish Riviera, check out this sailing trip.

I visited the Turquoise Coast on a 2-week tour around Turkey with Intrepid Travel, though I'd love to return some day and spend even more time there.

Where to stay on the Turkish Riviera

With so many resort towns along Turkey's Mediterranean Coast, the accommodation options are almost endless. But if you're looking to narrow it down, here are a handful of well-known and highly rated hotels:

When to visit the Turquoise Coast

The climate in this part of Turkey is mild year-round. High season is in the summer months (especially June-September), but the weather is usually warm enough for swimming in May, and stretching into October and November.

I visited in October, and thought it was the perfect time to visit Turkey in general. The Mediterranean waters were still warm and the sun was still shining most days, but the heat wasn't oppressive during the day.

Regardless of when you visit, make sure you put this part of the world on your bucket list!

Have you ever heard of the Turquoise Coast? Who wants to plan a trip? 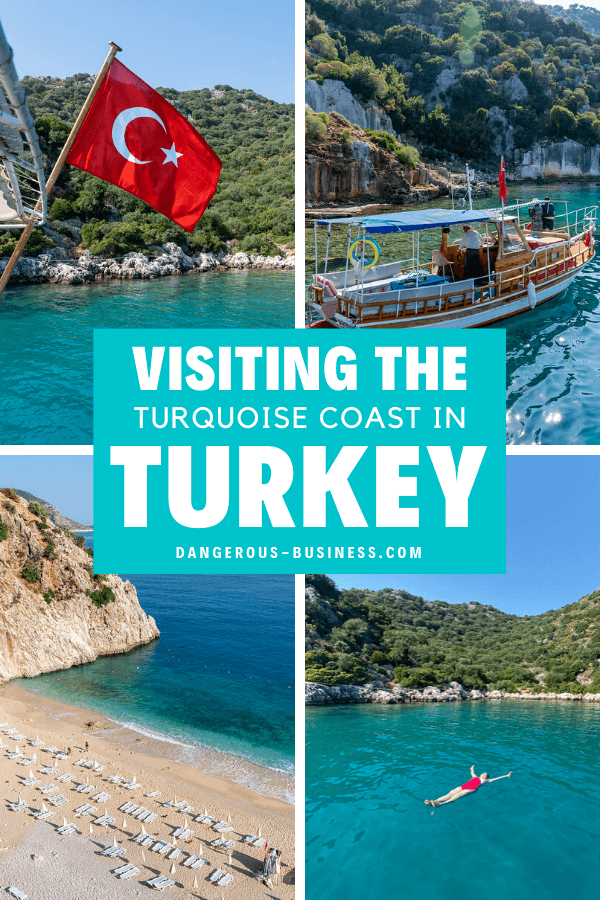