In Photos: Inside the Magnificent Hagia Sophia in Istanbul

Home » Turkey » In Photos: Inside the Magnificent Hagia Sophia in Istanbul

Walking into the Hagia Sophia for the first time is a moment in my life that I will never, ever forget.

Nearly moved to tears as I stood, open-mouthed, at the magnificent interior of this building took me completely off-guard; I never expected a bit of ancient architecture to affect me THAT much.

But the Hagia Sophia in Istanbul did.

Built originally back in the year 537 as the cathedral church of Constantinople on the orders of the Roman emperor Justinian I, this Byzantine structure has seen the rise and fall of two empires, as well as the birth of a modern nation.

In short, the Hagia Sophia has seen more history and culture than I can even comprehend.

RELATED: Photos That Will Make You Want to Plan a Trip to Turkey

For more than a thousand years, the original basilica served as the seat of the Patriarchate of the Byzantine capital of Constantinople. Then, when the Ottomans took over the city in 1453, the church was converted into a mosque, serving as Istanbul's main mosque for nearly 500 years. When the Ottoman Empire finally fell in 1931, the Hagia Sophia was closed for four years, eventually being re-opened to the public as a museum in 1935.

As you can imagine, visiting this site today is quite an interesting and fascinating experience.

From the outside, the building's history is apparent — the large Byzantine-style dome is flanked by minarets, and, nearly every day of the week, a long line of curious tourists can be found waiting for their chance to take a peek inside.

Inside, it gets even better.

The Byzantine elements of Hagia Sophia are present in the interior's grand dome, its massive marble pillars, and the intricate mosaics of Jesus and the Virgin Mary, angels, and saints that were uncovered when the building was transformed from a mosque into a museum.

The dome, stretching 107 feet across, is an architectural marvel. Even though it's not the original dome from the 530s, most of it still dates from the 560s, making it nearly 1500 years old.

But there are Islamic elements still present inside Hagia Sophia, too — like the large hanging chandeliers and round placards bearing the names of Muhammad and Allah in Arabic.

It amazed me to see all these religious elements side by side – and, indeed, this is what has made this spot so special for decades.

The Hagia Sophia, for me, represented the bits about Istanbul that fascinate me the most — the history of conquest; the clash and merger of “East” and “West”; and differing religions existing side by side.

For anyone trying to paint Istanbul (or even Turkey for that matter) with a singular brush, I highly suggest you visit the Hagia Sophia first.

Spend an hour. Walk around. Take a seat and simply listen to the peaceful quietness. Admire the amazing beauty that cannot be attributed to one culture or religion alone.

Then maybe you'll understand why this place moved me to tears.

Have YOU visited Hagia Sophia? Would you want to? 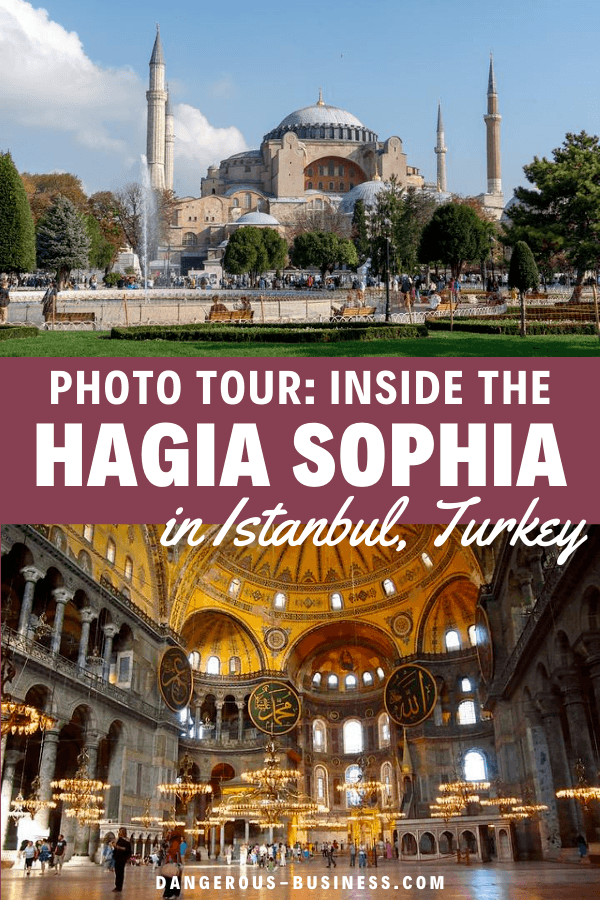 21 Comments on “In Photos: Inside the Magnificent Hagia Sophia in Istanbul”